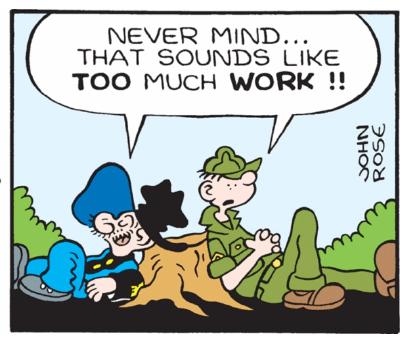 Beetle Bailey is celebrating his 70th birthday this week!  Beetle has been a favorite comic strip of mine for as long as I can remember.  Through my membership in the National Cartoonists Society I was honored to become friends with one of my cartooning heroes, the late Mort Walker and his talented sons, Greg, Brian and Neal.  In honor of Beetle's big birthday, I thought I'd post a couple of crossover strips I have done with Beetle and Snuffy Smith over the years.  Each one was a joy to create!

I was honored to have Beetle Bailey be part of the 100th birthday celebration of our Barney Google And Snuffy Smith comic strip in 2019.  This comic strip I created ran in June of 2019.