When my editor sent me an email asking if I would like to write something for the 30th anniversary of my strip “Between Friends”, I wrote back telling her I thought she had made a mistake. Thirty years? I couldn’t possibly have been writing my comic strip for THIRTY YEARS. Seriously, could I be that old?

Apparently I am, and so is my strip. I should have known. My characters (much like their creator) don’t look quite the way they did once upon a time.

When I first began the strip, Maeve was married to Simon. Susan was single. Kim was a white woman named Laura. 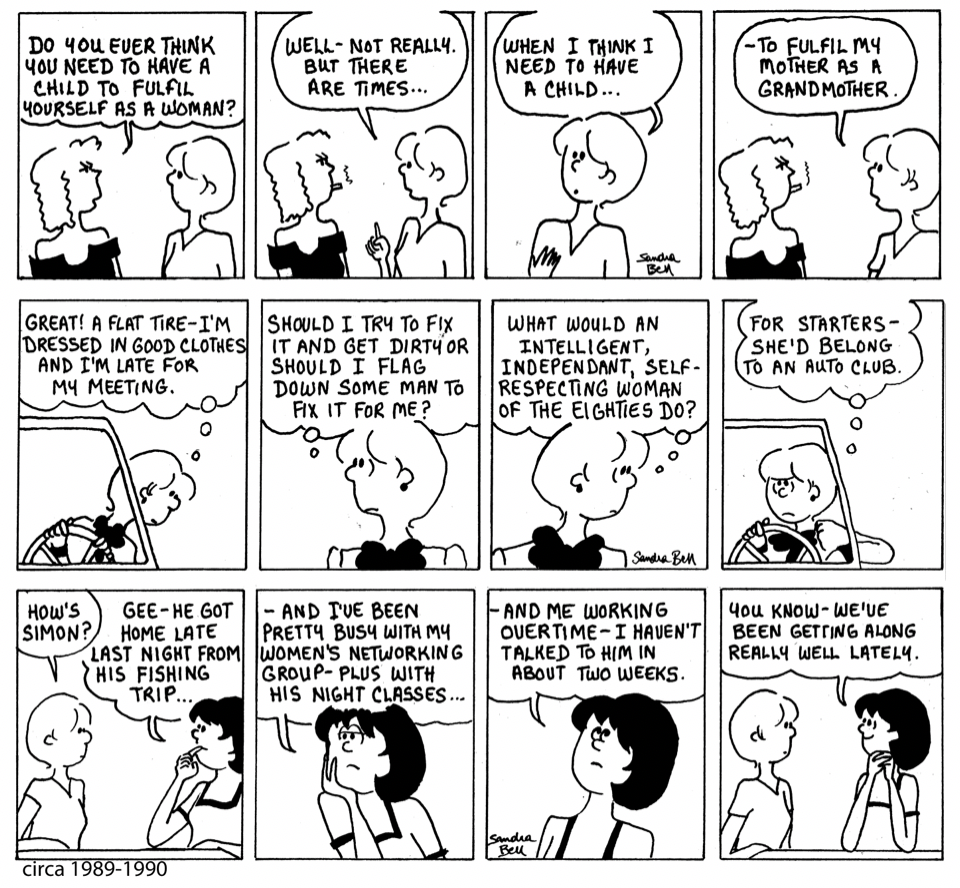 I had sold my strip to 3 Southern Ontario daily newspapers and a couple of weeklies. I was making $100 per week…and working at a Duty Free Shoppe on the Fort Erie/Buffalo border.

After self-syndicating for about 4 years I was just about ready to throw in the towel. Then one day, my husband and I came home from a shopping trip and my answering machine was blinking (for the pre-voicemail people, this indicated I had a message). Turned out it was Jay Kennedy, the editor of King Features. He left a message for me to call him back to discuss my strip. ME…call JAY KENNEDY in NEW YORK CITY at KING FEATURES SYNDICATE…to discuss my strip. After drinking a large glass of water and walking up and down the stairs to burn off some nerves, I returned his call. He wanted me to sign a development contract. I asked him how soon he could have it in the mail.

Jay and I worked together for about 8 months to develop the strip. There were some changes: Maeve became a divorcee (sorry, Simon). Susan married Harv. To make the strip more diverse, Laura became a Black woman named Kim. We talked about small nuances…like who would wear jewelry and slimming down jaw lines and the finer points of differentiating noses. My characters reflected real women and the gags reflected the real day-to-day of women’s lives. Jay felt (and I agreed) that my characters should look more realistic and less “cartoony”. In hindsight, I think they all could have used underwire bras too.

Time went on. I had two children. When their influence became too hard to ignore, I decided Susan would start a family. Because of my own problems with infertility, I decided Susan would have difficulty conceiving and would visit a fertility clinic. I ended up having her adopt a little girl. It was the first time I received a substantial amount of mail. One reader warned me I had better do right by “Emma”, the little red-haired addition to my comic family. The heartfelt response and the depth of the emotional attachment to the characters and to the series surprised me.

Eventually, Kim married a widower with a son. Maeve continued to live the life of a successful business executive as a single woman. I spiced things up for her by having her date Robert Downey Junior and Viggo Mortensen.

Gradually, my women characters changed over the years. Reading glasses appeared about the time I started using them. The topic of conversation touched on retirement plans, and menopause, and the never-ending debate of whether to ‘color’ or ‘rock the grey’. The kids left home to go to university. Lately, a little neck wattle has begun to appear.

When I signed with King, my husband was worried about my output. “What if you run out of ideas?” he asked me. I won’t, I said. I tried to explain to him that this is what I DO. That’s not to say there haven’t been weeks where I’ve been agonizing and sobbing (well, maybe not actually sobbing but imagine the angst you feel when you’re sobbing…like that) and lamenting that I am DONE! DONE! I CAN’T THINK OF ANY MORE COMICS! And then something strikes and there I am—writing comics.

And mostly, thank you Maeve, Susan and Kim. xo