MONDAY MOCK NEWS: SCREENING OF CHILDREN’S MOVIE TURNS OUT TO BE A HORROR FLICK 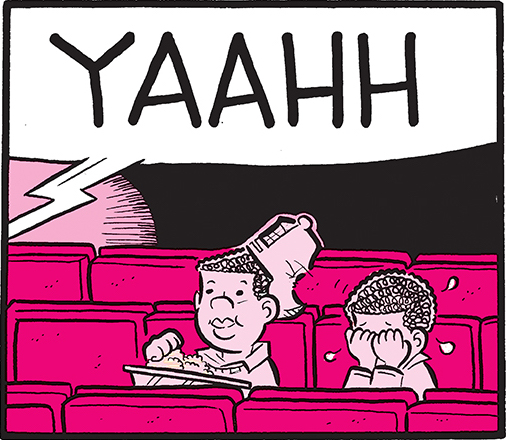 Local young boy Curtis Wilkins, 11, took his younger brother Barry Wilkins, 8, to a supposed 3D screening of “Finding Nemo.” Little did young Barry know that this was actually a screening of the new “Child’s Play” movie, the Aubrey Plaza-starring remake of the 1988 slasher flick. “I’ve been looking forward to it for a while now,” says Curtis. “I’m a sucker for horror films, and they make for the best pranks on my little brother! By the way, I wrote my very own horror movie about zombies and werewolves. Could I possibly advertise it here so that Hollywood can catch wind of it?”

As the lights dimmed and the ominous music started, it was clear that this wasn’t the 2003 animated film by Pixar. “SOMEONE PLEASE GET ME OUTTA HERE,” exclaimed Barry. “MY PEAHEAD BROTHER WANTS TO TORTURE ME!” Their parents, Greg And Diane Wilkins, were called in to pick up the boys. They were not available for comment. Before they left, Curtis came up to us for further comment: “We couldn’t finish the movie, but it seemed pretty a’ight. Seriously though, can anybody in Hollywood please buy my horror movie pitch? It’s OK if you want me to add in vampires! Anything to scare the living poop outta my scaredy-cat lil’ bro.” Before he could read his pitch, Barry jumped him and started a fight, which their parents had to break up, and then they proceeded to abruptly leave with the boys.