Ask A Cartoonist: What We've Learned from Krazy Kat

George Herriman, the creator of Krazy Kat, died today in 1944. Krazy Kat is an absolute treasure of a comic, and everyone here at Comics Kingdom is so proud that it is part of our heritage-- famously beloved by William Randolph Hearst himself, Krazy Kat graced the comic pages from his inception in the bottom margins of The Dingbat Family until Herriman's death.

George Herriman's work inspired and touched the lives of so many cartoonists that we decided to spend some time today remembering Herriman's legacy and the impact he had on all of us.

Despite being almost loved to death, Herriman's genius is still inspiring.
He approached Krazy Kat like an improvisational jazz musician, riffing, playing with the form, not afraid to be less than accessible to everyone.
My mother HATED Krazy Kat as a kid in the 1920s. Her fairly hip parents loved it and read it out loud to each other on Sunday mornings in Brooklyn.
That only made my mom detest it more---because she didn't "get" it--- it was something for adults.

Having part of your audience not "get" your strip is something I proudly strive for every day. Thanks, George.

George Wilson, Lover of the Classics!

So the other day we got an email from a woman in tears (she said) over the physical abuse suggested in this Zits strip. It prompted a significant flow of correspondence in which I worked to explain the use of metaphor and visual language in comic strips, and she stressed the permanent emotional damage from corporal punishment. (Sigh.)

Throughout our earnest exchange I could only wonder what reader response George Herriman would get today if he were to draw his characters hitting each other in the head with bricks every day.

I've been to the Billy Ireland Cartoon Library and Museum at The Ohio State University a few times, and whenever I visit, I always make a point of standing slack-jawed in front of this beautiful 'Krazy Kat' page from 1942 on permanent display in The Billy's Treasures Gallery. Herriman was really letting the krazy fly by this time in his career-- the hatching, the blobs of ink, the scratched off areas, the intuitive looseness of it all. You can't do that on a Wacom Cintiq. 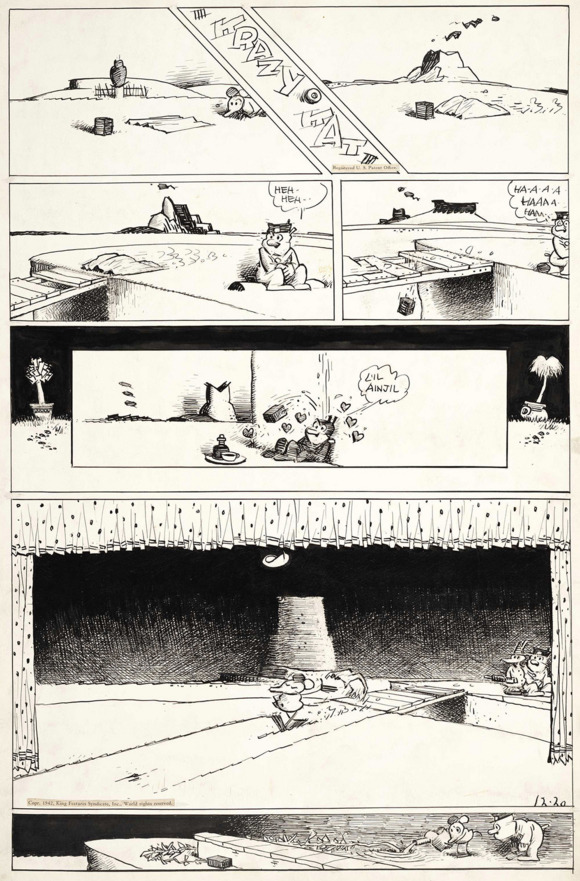 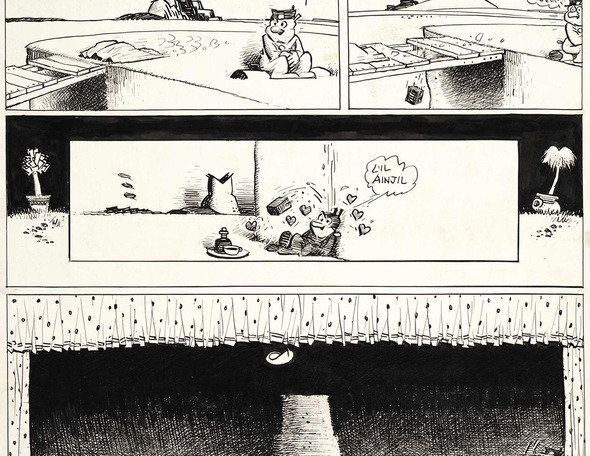 Also, another fun 'Krazy Kat' tidbit... long before the SPX began handing out Ignatz Awards, named after our favorite brick-throwing mouse, there was the original Ignatz Award, bestowed on many worthy cartoonist greats during one of the first-ever comic cons, OrlandoCon, from 1974 to 1994. One of the founders of OrlandoCon was raconteur/cartoonist, Jim Ivey, former editorial cartoonist for "The Washington Star" and "St. Petersburg Times." Now 90-something, Jim is still with us, living in Orlando, and is a fountain of cartoon lore. The Ignatz, a brick painted gold, sported a brass plaque emblazoned with Ignatz flinging another well-aimed missile. The award was highly coveted, and given many legendary heavy-hitting cartoonists guests such as, MAD's Don Martin, DC Comics great Joe Kubert, Burne Hogarth of 'Tarzan' fame, and 'Hagar' creator Dik Browne.

Here's a pic of Jim getting ready to klobber Burne Hogarth with the Ignatz in 1975. 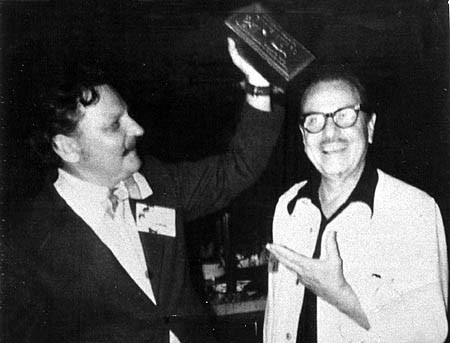 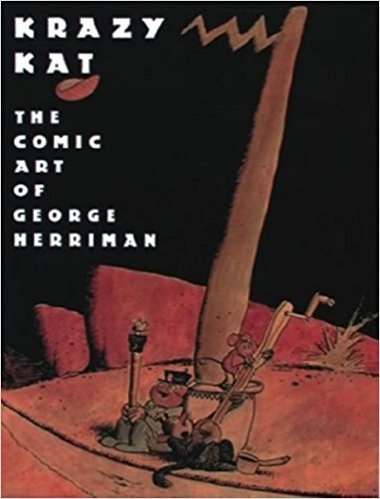 and created a MUTTS a strip in which the title panel is an homage to the book’s cover. (Obviously Herriman was a major influence.)

Ignatz sits on top of a bookshelf in my studio and watches over me as I work each day. Ignatz has been there for many years and so far, has not thrown the brick at me! Although I am sure there has been many times that Ignatz wanted to throw it! 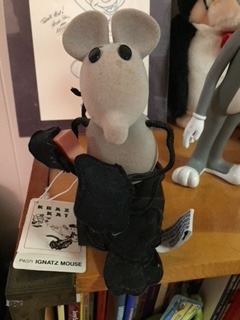 It’s impossible to quantify the contribution William Randolph Hearst made to the American comic strip. It’s likely that without his guidance and intervention, the comic strip might never of existed. Anecdotally, Hearst said something to the effect of “I don’t care if I’m the only person in the country reading Krazy Kat, my papers are going to carry it!” Which only made me love him more.

If Mr. Hearst was Fan Zero for Herriman’s work, he was not alone. Jack Kerouac and e. e. cummings loved Herriman’s work... and famous novelist Ishmael Reed, dedicated his novel “Mumbo-Jumbo” to him...

“To George Herriman, cartoonist creator of Krazy Kat and African-American!” 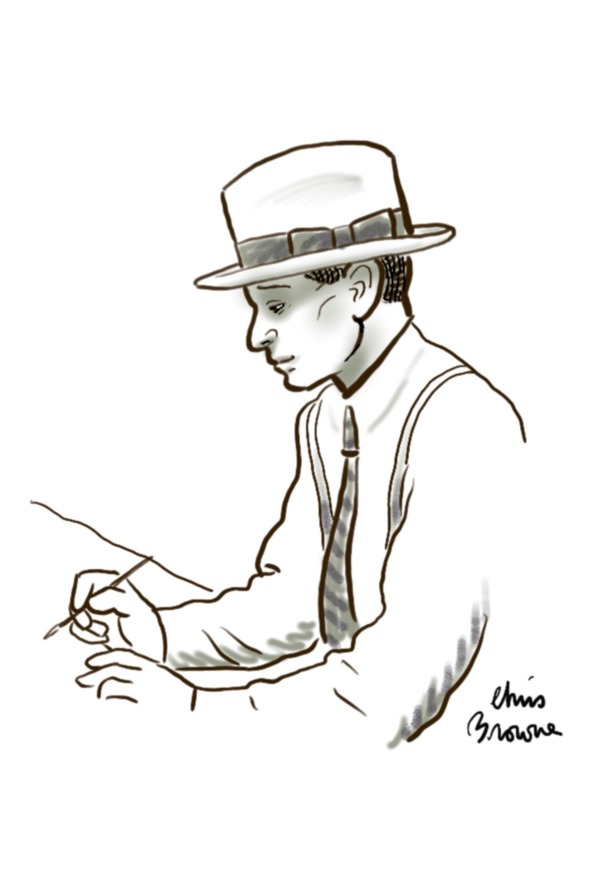 A Portait of Herriman by Chris Browne

“A Tale of Tiger Tea” was by far my favorite Krazy Kat story. A thinly veiled allegory about marijuana use in Coconino County, where it is always, apparently “”tea time”... 4:20!

In 1990, my wife Carroll and I attended the National Cartoonist Society awards at the Hyatt Gainny Ranch in Arizona. We had the pleasure of driving in the rolling hills of the real Coconino County. I remember commenting on how the hills and the buttes seemed to move around on their own, just the way Herriman drew them in the strip. You could easily imagine one of his cantaloupe rind moons rising in the gathering dusk...

Hagar the Horrible is an especially fuzzy character who owns much to Krazy. He’s as cuddly as the “Kat”, as felonious as Ignatz and as tough as Officer Pupp!
He’s surrounded with an offbeat collection of friends who always have each other’s backs. After all, the weather is always changing... and sometimes it rains bricks!

Here is a wonderful article that touches on among other things, the notion that Krazy may well have been the first Transgender comics character!