Sound effects are such an ubiquitous part of comic art and history that we can't imagine comics without them-- and big, bold, brightly-colored graphic sound effects often make their way into television and movies when people want to evoke a "comic-like" feel. But they're an artform unto themselves that plays a necessary role in comics and wouldn't exist if it weren't for the need to be able to illustrate a noise-- loud or quiet-- without sound!

Can you hear the disco music playing on this one?

I tried to make it look musical, by putting the characters in dancing poses, and making sparkly lights. Sometimes I use wavy lines for sound effects, but I also love the cartoon tradition of using made up words like splud, warfle, and sclurch. ( Did you just hear the sound of boots walking on a muddy road?)

Boing!! Funny you should ask--I just did the attached Zippy strip about "Gerald McBoing-Boing" who spoke only in sound effects. The character was originally created by Dr. Seuss (Ted Geisel), but made popular on TV by UPA in 1956. I loved the show (and the comic books) and as kid, I would occasionally BE Gerald in sixth grade class,much to the confusion of my poor teacher.

Hank used sound effects very sparingly in his panels but when he did, they were beautifully incorporated into the artwork. 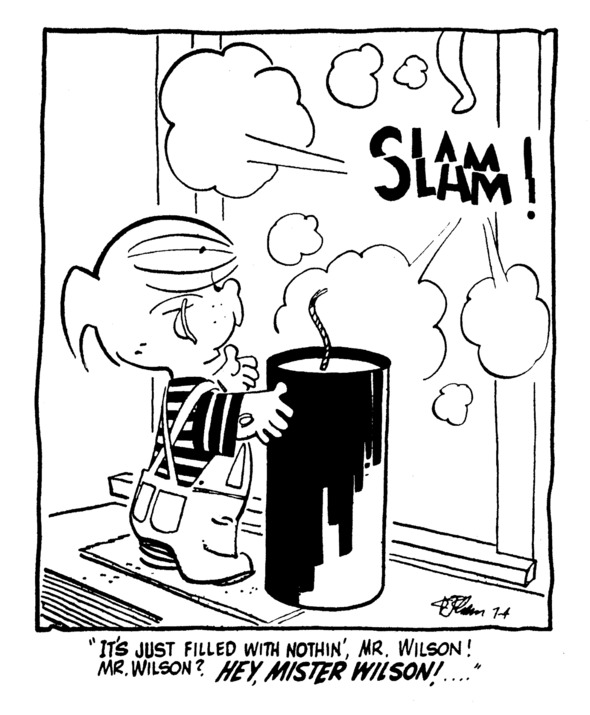 At one point "Fastrack's" Autocorrect was disguised as a phishing scam to visit a malware bar, resulting in a battle between her and a worm. That led to this observation concerning her sound effects.

I use lots of sound effects in the Snuffy Smith comic strip! Like BLAM, BLAM for gunshots and WAAAHHH when little baby Tater cries, but the sound effect I use most frequently is ZZZZZ because Snuffy sleeps a LOT !

Sound effects—one of my favorite subjects, and favorite things to draw.

There are three strips and a MAD cartoonist that influenced me: Peanuts, B.C., Cul de Sac and Don Martin (who, in my opinion, created the most inventive sound effects in comics). All masters.

One thing they all have in common, and I try to emulate, is to make sound effects say as much by how they look as how they’re pronounced.

Here are some of my favorite Baby Blues SFX panels from the past couple years. 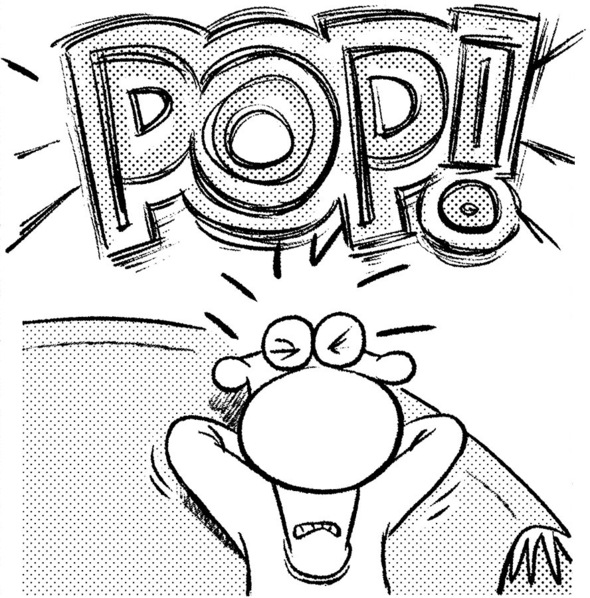 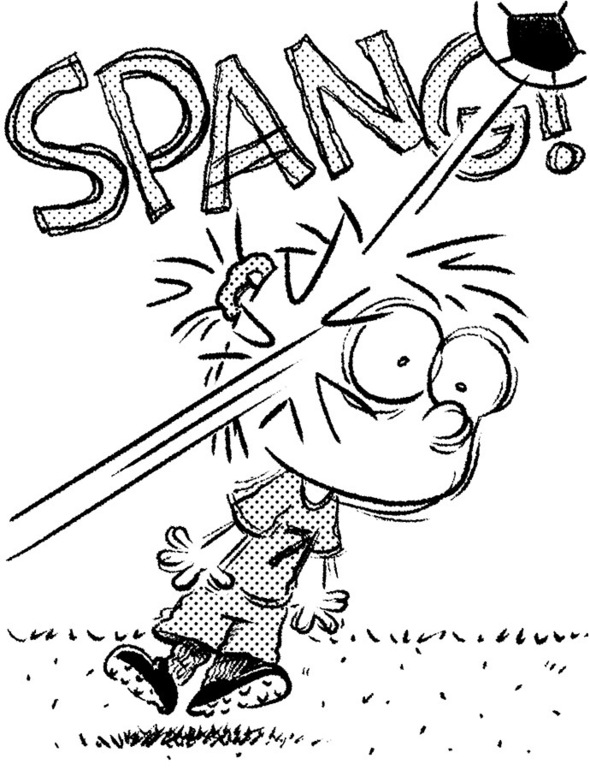 Jerry Scott and I sometimes text about sound effects as I ink Zits. The text will read something like this…

Jim: In panel three, wouldn’t BZZZKFLOOOOOOOM be better? Other ideas?

Here’s a Sunday strip from 2016 that gave the sound effect machine a workout.

Sound effects have always been in the comics I read as a kid and I use my fare share of them in Mark Trail. While I'm on this topic, I'd like to discuss an actual audible sound effect that most folks have heard (even if they're not aware of it)!

The 1951 western movie "Distant Drums" featured a sound effect known as the "Wilhelm Scream"! It['s an agonizing scream sound usually accompanying movie characters falling from great heights or getting blown up. While most folks agree that actor / singer Sheb Wooley created the sound, it's named after a character named "Private Wilhem" gets shot in the leg with an arrow in the 1953 film "The Charge at Feather River" and has gone on the be used in hundreds of films since and countless TV shows. It has become a bit of an 'in joke" among Hollywood sound designers and theater goers because, as a member of the audience, once you hear it, you'll forever notice it when you watch a movie that uses it. It's in every Star Wars movie as well as the Indiana Jones franchise.

I have often wondered - how could I possibly put such an obvious audible sound effect joke into a "soundless" comic? I mean, if one had to actually spell out the Wilhelm Scream ... how would it be spelled? With that in mind, I set out to devise a way! For starters, recently within Mark Trail I've been mentioning that a fictional circus (Tingling Bros.) is closing down and that there oldest clown, "The Great Wilhelm" is retiring. When a character notices that headline on a newspaper, he reminisces to himself "I remember that clowns act, he never said a word, just screamed a lot!". Well, in an up
coming storyline I am going to feature that character - "The Great Wilhelm" and, yes, he's going to scream!

I noticed that the online audience caught on to my little joke about the Wilhelm Scream, so, I decided to have a little contest for those of the online audience that wanted to participate. Spell out for me what you think the Wilhelm scream would look like in print! The one that spells it in a way that sounds the most like the actual sound clip to me, wins a piece of original art from the strip! Several people took a stab at it and I am glad to say, one person suggested a spelling that works for me!

I'll be announcing the winner soon through my social media outlets and audiences will soon get to "hear" the Wilhelm Scream within the pages of Mark Trail!

Sometimes it feels as though Steve and I spend more time discussing how to onomatopoetically spell the exact sound made by things like an open-faced peanut butter sandwich dropped on the floor, than almost every other aspect of creating "Dustin".