Happy August! There's just one more month of summer left, so it's time to buckle down and plan that last-minute vacation! I checked in with our cartoonists to hear their vacation stories.

The topic is vacations, or, as I prefer to call them - "research trips". My wife and I go on research trips as often as we can and on said trips, I'll compile information on local plants and / or animals that will eventually find their way into Mark Trail Sunday pages! We have traveled quite a bit - Aruba (resulting in the blue parrotfish Sunday page), Anegada island in the BVI which informed the pink flamingo page and the dodder vine page, Saint John in the USVI where we encountered the large iguanas at Trunk Bay, Belize and the howler monkeys at Lamanai, the pink sand beaches of Harbour island in the Bahamas and many more!

There's an old saying - "it's only an adventure if the outcome is uncertain!" and this has certainly proven true for me on my research trips! I severely injured my feet on the beach at Anegada, I have a scar on my arm from snorkeling too close to a sting ray in the surf at Harbour island, I almost died in the "Cave of the Stone Tomb" in Belize - an ancient Mayan cave dating back to 900 AD where we got to see ancient human remains.

My adventures also pop up in the Mark Trail dailies ... for instance, Mark is currently exploring ancient Maya ruins, directly inspired by what I experienced in Belize as well as the wildlife we encountered!

So, yes, we enjoy a "vacation"... what a better way to get material for my comic other than "living it"!?

I think the greatest vacation week for Hi and Lois was the week that, unfortunately, never was allowed to run. Several years back, Brian wrote a week of gags for a trip to Disney. They were wonderful but legals were afraid to run them. They are truly amazing pieces of art! Here’s a copy of the Sunday strip that culminated the week of dailies.

I live in a very touristy beach town with a zillion tourists. This cartoon shows where I’d like all of them to go! 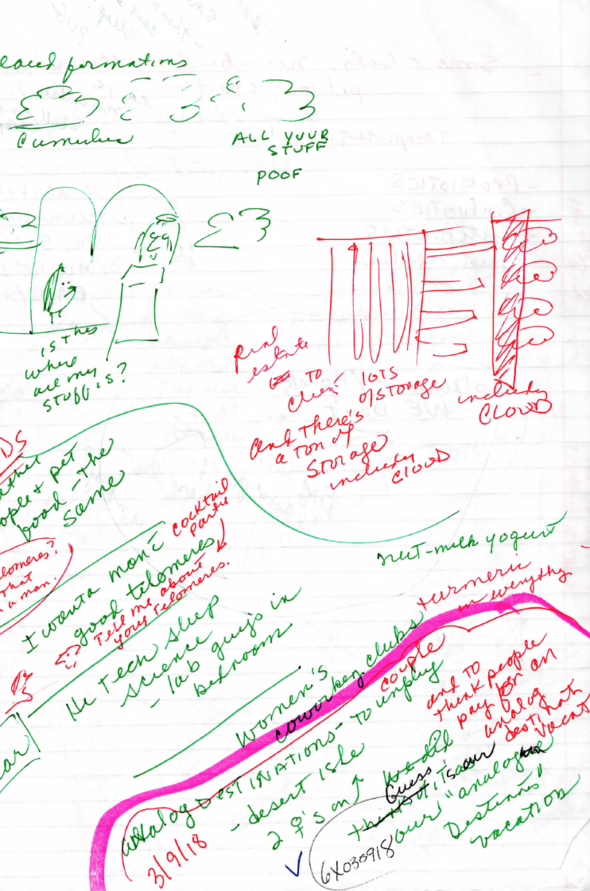 OTOH, I think Brian has strips scanned that featured Sarge going home with Beetle in Hi and Lois.

The Flagstons took a cross-country trip in 1966 and we revisited this theme in 1999.
Beetle took his first furlough home in 1952, In 2003, he brought Sarge and Otto with him on furlough.
I wrote about these and other trips on the website. 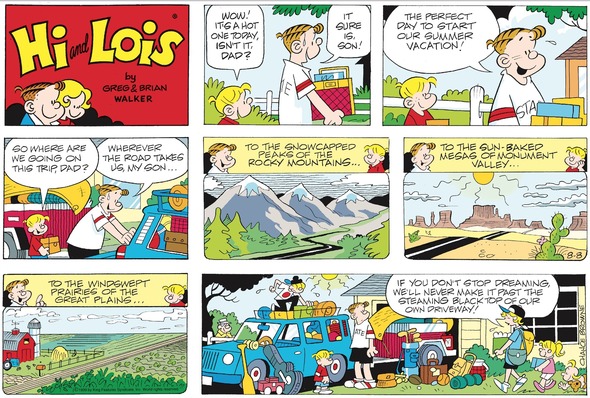 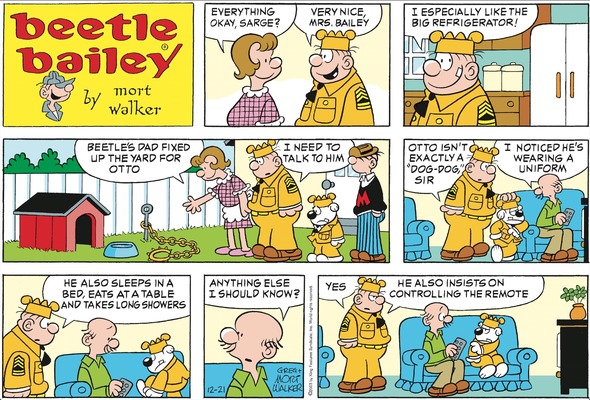 I’m off on vacation today! Heading to the Herne Bay Cartoon Festival in England next weekend. 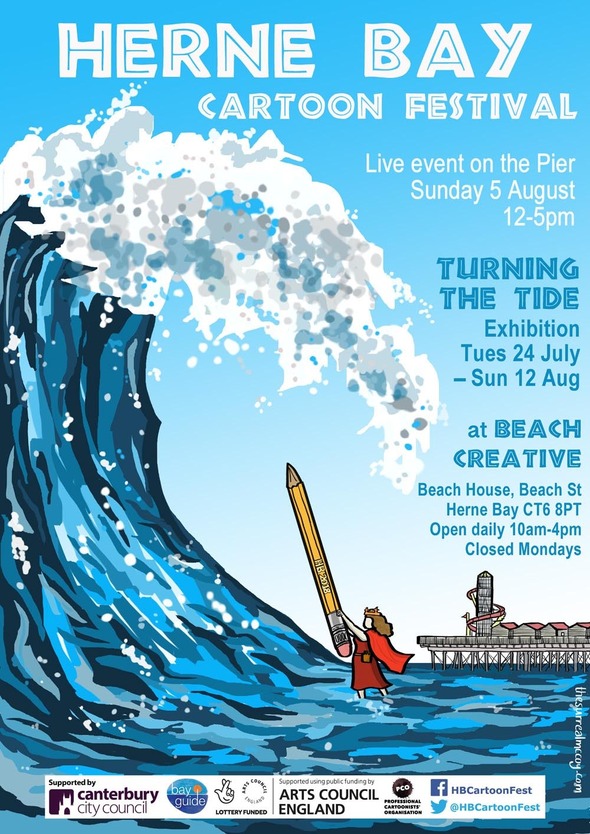 My idea of a nice vacation is to unplug completely and remove all forms stimulation. As a kid in the 50s, I was always fascinated with the Beatnik term, "nowheresville". It always seemed like a place I'd like to visit.

Occasionally, Hank would send the Mitchells on vacation or do a beach series. That gave him the opportunity to get them out of the neighborhood and ,oh yeah, give poor ol’ George Wilson a much needed break. 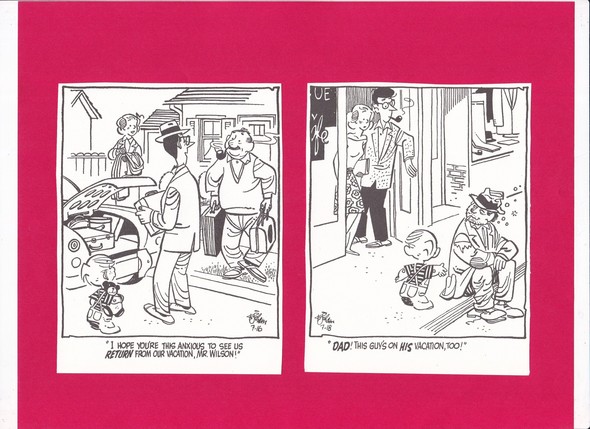 This book just came out last year about Dennis going to Hawaii...Dennis went around the world In his comic book hay day. 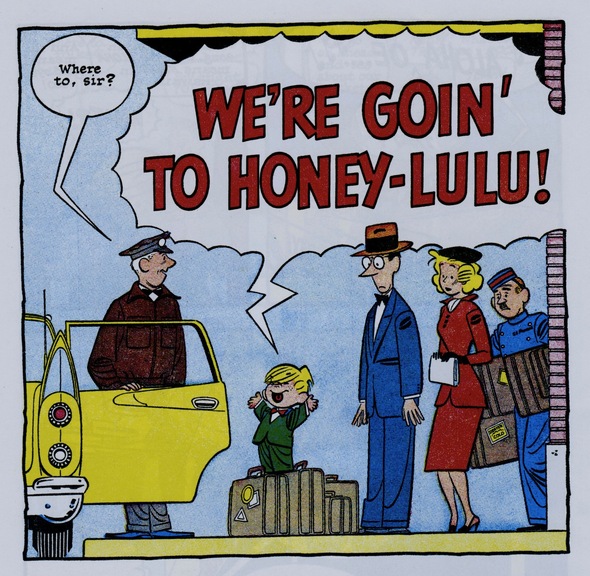 Since our oldest daughter was in kindergarten (she is now 27), my two daughters, my wife and I have been taking Spring Break trips with my parents. We have been to many different places, but most often to Disney World, Myrtle Beach, SC and Pigeon Forge, TN. We have many memories of these trips together. But one particularly funny memory we have happened in Pigeon Forge. We had just eaten in a very popular, crowded restaurant there and we all walked out to our van, except for my Dad who was paying the bill that night. The parking lot was very large and full of cars. My other family members and I got in the van and I was driving around to pick up my Dad. As I was driving, I saw my Dad walk out of the front door of the restaurant. There was a van that looked EXACTLY like ours very close to that door. He thought it was us and started walking towards it. And to everyone in our van, I said, "Look, Bob-Bob (what our daughters call him) is getting in the wrong van!" Sure enough, my Dad went straight to that van, opened the side door and started to get in! Then, he looked around, noticed he did not recognize anybody in that van, through his hands back and said, "Whoa!" realizing what he had done! We saw all this from our van and were laughing hysterically! What I would have LOVED to have seen were the expressions of the people in the OTHER van! I drove around and picked him up and we all got a great laugh out of it! To this day we still refer to that vacation as "The Time Bob-Bob Got In The Wrong Van!"

Mary and Toby took a fun cruise vacation last year where they met fellow travelers Derek and Katie. And on that cruise was the incredible entertainer Esme!

This is a Zits series we did back in 2003, based loosely on a road trip to the Four Corners region of the American southwest that I’d taken my family on a decade earlier. My kids were younger than Jeremy and mobile devices weren’t as common in those days, but the utter boredom emanating from the backseat was identical. The last straw was when my kids refused to get out of the car to see the Grand Canyon.

"Fastrack's" Dethany and her boyfriend Guy had an important vacation this year in which they completely disconnected from all of their devices and rented a cabin in the mountains. Totally offline, they saw it as a test of their relationship. The storyline began with this strip: https://comicskingdom.com/on-the-fastrack/2018-07-02. and Dethany also discussed its impact in this month's video: https://www.youtube.com/watch?v=Lyf9fm0vj-k

Here is my vacation post with comic: We took many family vacations when our children were young, encountering snakes, black bears, alligators, and just about every flying insect on the planet. This strip is the opening to a series I wrote about one of those vacations.