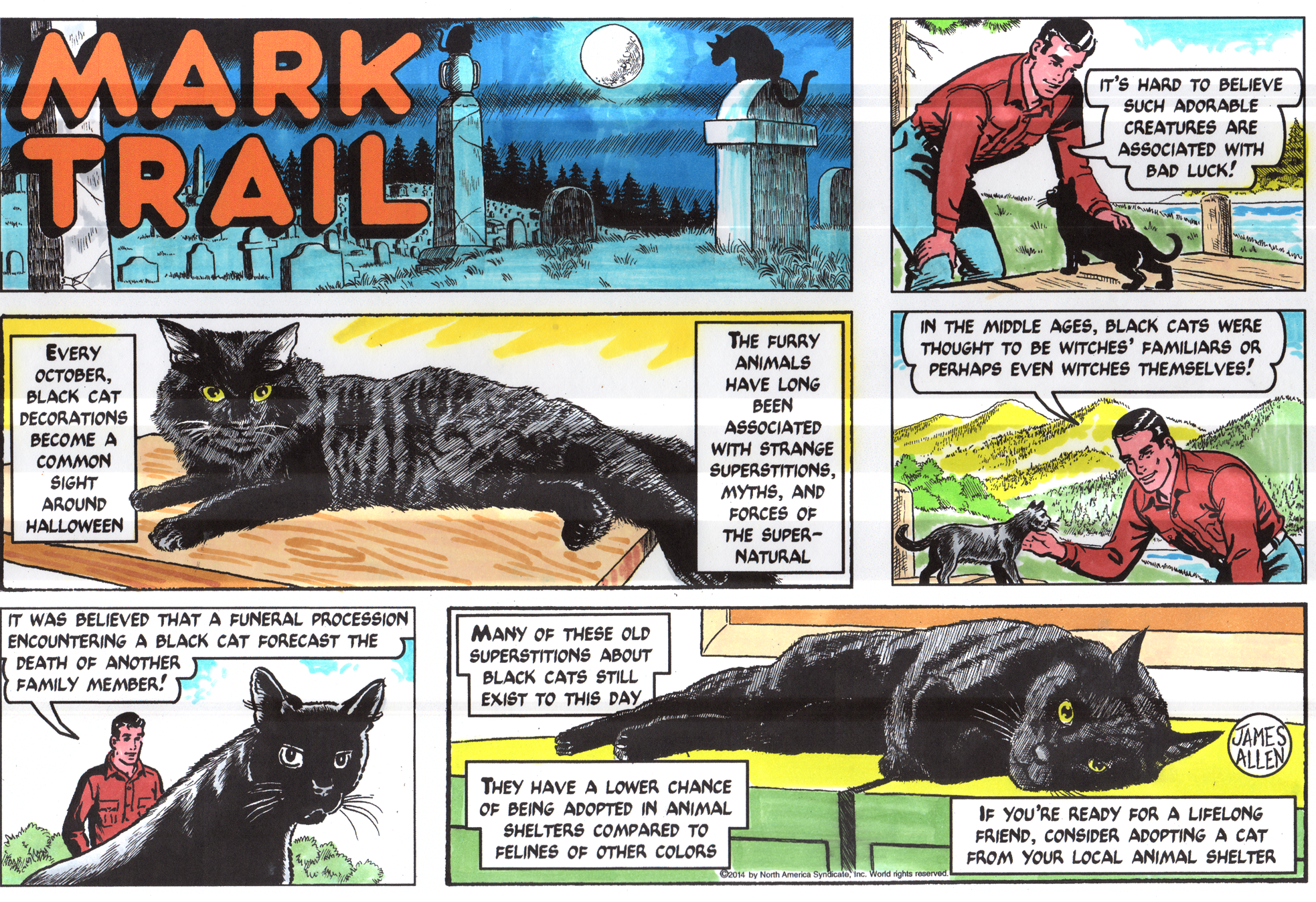 This week, our cartoonists are sharing stories and pictures of their pets-- and the pets that have made their way into their comics!

This is a comic based on my cats. One cat is always interested in what the other is doing. If one has a favorite sleeping space, the other will take it over... etc. Hope you can use this one. In the photo, the cats love to find a dish of water in an unexpected place. I put water out for Conor, my older kitty, and when he wasn't looking, Teacup came and took it over!

Here is a picture of me and my dog, Mr. Beasley looking at an American Red Snapper. 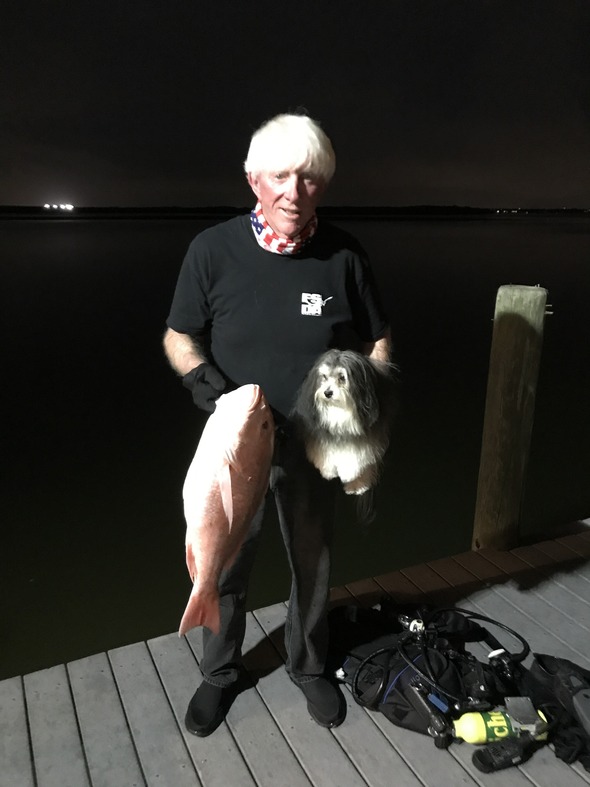 When I was six years old, I got a parakeet named "Tweety." Thus began a life-long fascination with birds. I've had parakeets, lovebirds, cockatiels, tumbler pigeons and parrots. 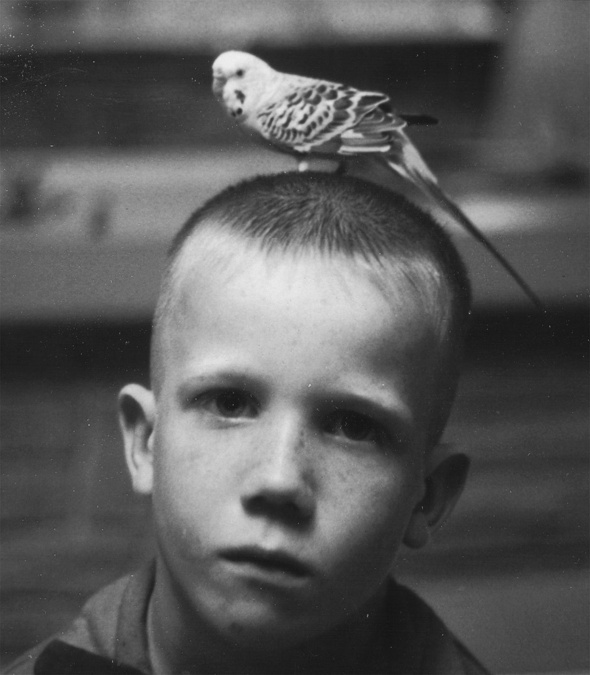 For the past 45 years, I've shared my studio space with a blind yellow-crowned Amazon parrot. When I got her, I was reading The Lord of the Rings, and named her Frodo (it's virtually impossible to determine the sex of an Amazon parrot, so I just gave her a cool-sounding name ... and we called her "him" until "he" surprised us one week many years later by laying two eggs)! Anyhow, she's been great company, but is beginning to slow down a bit (her vet is amazed at how she's doing, however ... she ... the vet ... says they rarely see an Amazon over about 35. She likes listening to NPR, whether it's the smooth, mellow-voiced announcers or classical music or jazz ... but she growls her disapproval at opera (and I share her sentiments there). So I guess it makes sense that I now draw a comic strip about a bunch of birds!

I also had a German Shepherd from 2nd grade thru high school. My dad named him Fosdick (after Fearless Fosdick, the detective in Li'l Abner). In later years, we had two wonderful Bichons named Max and Sandy, who have both crossed over the Rainbow Bridge.They loved traveling, especially to the beach. 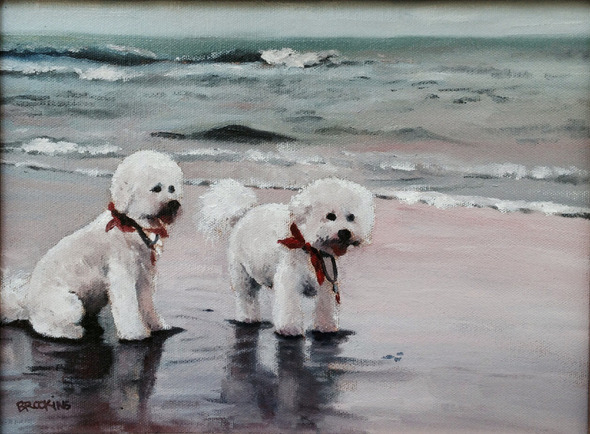 We now have a social butterfly of a Bichon named DeDe who is almost three. She began obedience training at 12 weeks of age, and is now a therapy dog. 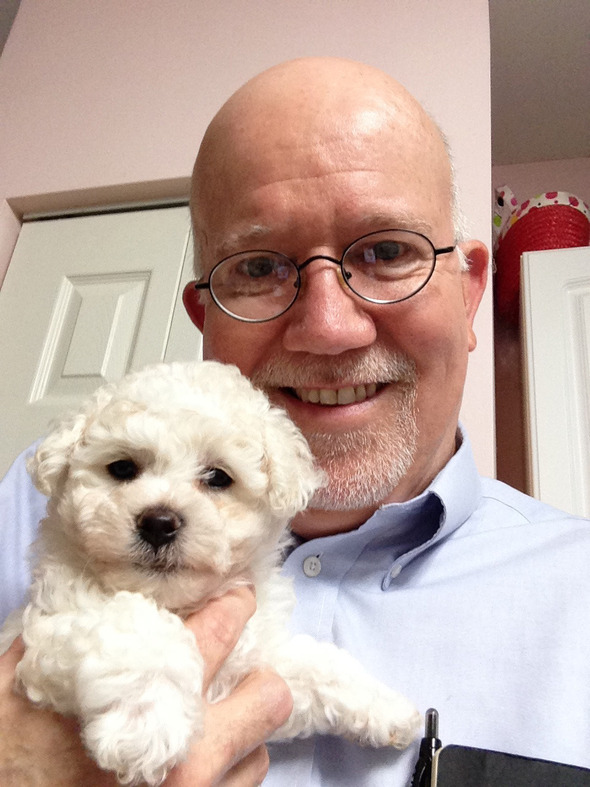 She was great comfort to my mom and father-in-law during the last few months of their lives (they both passed away this year). DeDe hangs out in my studio during the day, and loves going to retirement communities to visit the residents. She also loves to travel (she and I took a 3300 mile road trip together back in the Spring). But come nighttime, she likes to cuddle with my wife, Janet, and watch Netflix on the iPad.

As a cat owner---"enabler" might be a better description---I've done a bunch of cat-related strips over the years. Many years ago, I gave Zippy a pet---Dingy---a cat who makes Garfield look warm and cuddly.

Whenever one of my cats does something strip-worthy, Dingy is ready for a casting call. Now if only my own cats could read so they could appreciate al the effort I've expended to make them famous....

Our Jack Russell is quite the poser. He is the inspiration for our friend, Edu’s new venture (t-shirts, using my designs), Billie & Co. 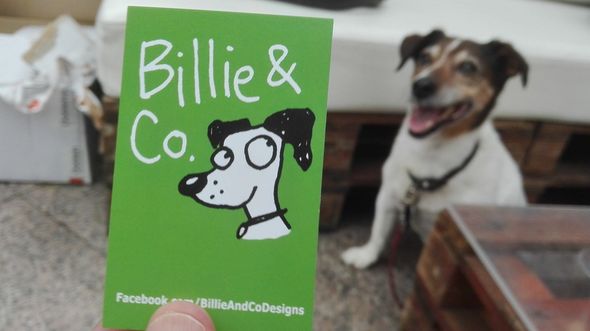 My wife , Andrea, is the supreme cat lover. We have a cat named Whitepaw, who’s the sweetest, gentlest cat ever. On Andrea’s birthday and any related holiday, I usually have Whitepaw, in cartoon form, convey the message. 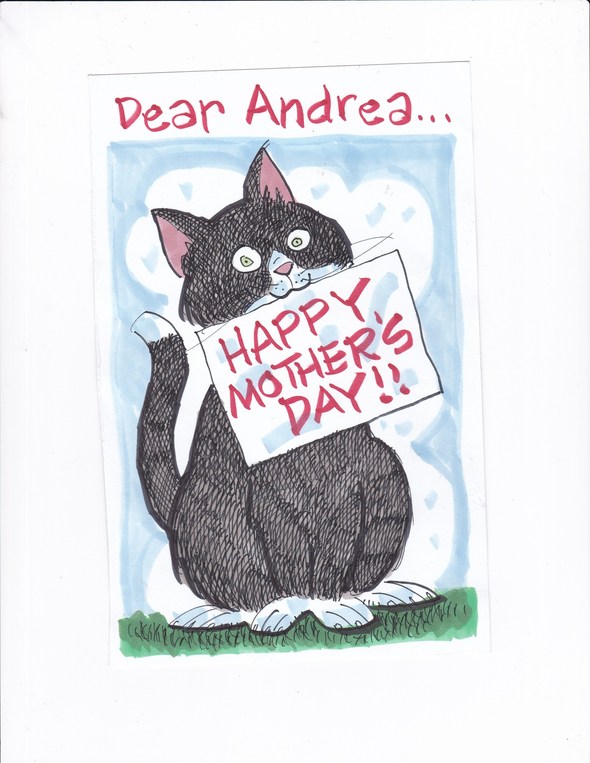 Of course, in the strip, Mark has his faithful Saint Bernard "Andy" and although Ed Dodd had pet dogs through the years, I don't believe Andy was based on an actual pet.

I had three cats - one was an orange "bulls-eye tabby" (now deceased) and the other two are solid black. At times, I have put all three in various Mark Trail Sunday pages. The first was a Sunday I did while assisting Jack Elrod. He asked me to do a page about cat's whiskers. I put my orange tabby in that page and it ran on January 19th (not sure of the year - possibly 2012, but the date was January 19th). 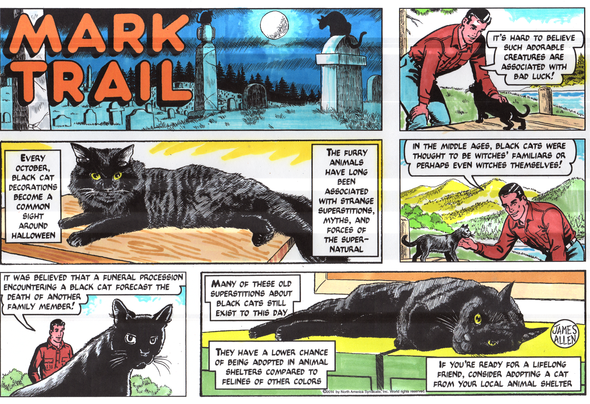 I featured my two black cats (Kong and Lil' Dude) in a Sunday page about black cat superstitions. I have attached a scan of the page to this email as well as pictures of both of them. On the page, Kong (big, shaggy long-haired cat) is featured in the first oblong panel and Lil' Dude (short-haired) is in the last panel. Here's a little trivia tigbit about that last panel - I referenced from a photo of Lil' Dude resting on top of two green filing cabinets. The cabinets had been given to me by Jack Elrod and they contained decades of reference photos collected by Ed, Jack and Tom through the years ... everything from wildlife to rocks and motorized vehicles. The cabinets sit in my studio and one day Lil' Dude was resting on them and I snapped the shot to put in the strip! 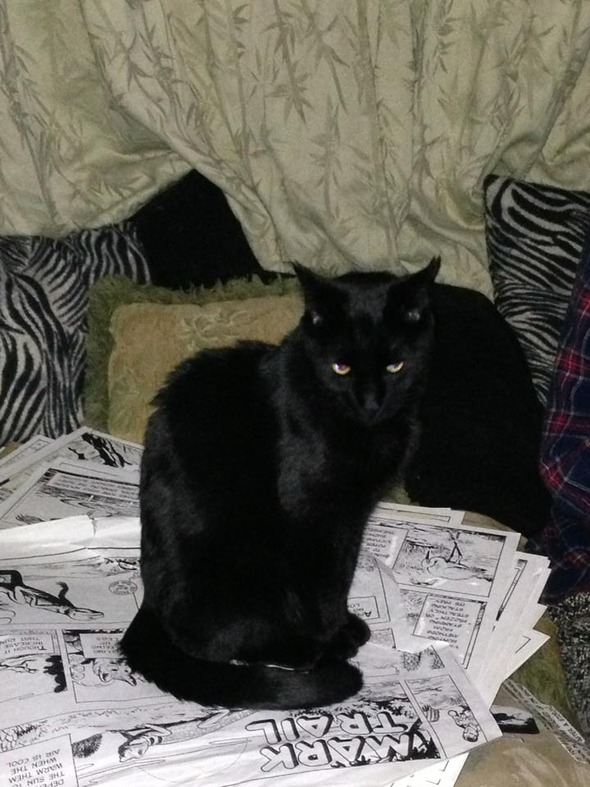