This week, we are talking about RESEARCH!  Cartoonists have to write about-- and draw-- things they've never encountered before on a pretty regular basis.  So I asked our cartoonists to talk about how they do their research when they encounter something they don't know.

Here’s Hank Ketcham’s perspective on research from THE MERCHANT OF DENNIS. 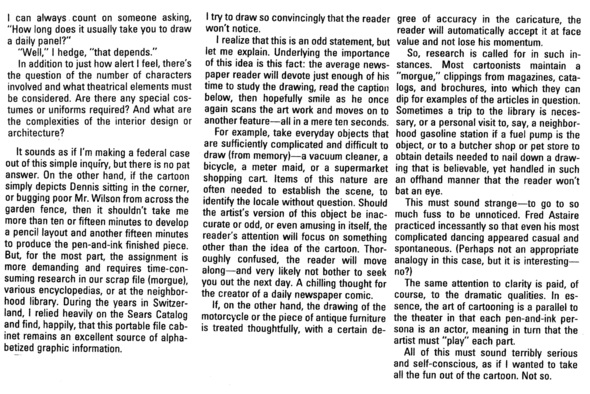 I go on Google/Wikipedia/Bing Images almost every day to research my daily Zippy strip. Today, I did a Trump strip, so, naturally, I needed Trump photos. Click>Bing Images>find>download>print! (Bing is better than Google for images.)

Currently, I'm researching like crazy for my new book, "Nobody's Fool: The Life and Times of Schlitzie the Pinhead" (2018 pub. date). Quick example: In researching Schlitzie's appearance in the 1932 movie "Freaks", I came upon two photos of the movie theatre where it premiered, replete with signage and photos of key scenes in the film, lobby cards, etc. I couldn't do this book without the worldwide interweb! Amazing what I find almost every day that I was unaware of previously.

What used to involve trips to the library now takes seconds---and yields more stuff. Of course, there's a lot of dubious data on the net, so I try to apply the sniff test on everything I come across.

I remember doing a lot of online research on classic Ford Mustangs when I drew this Sunday title panel many years ago. I have always been a fan of those cars! Probably because my Dad had a red 1965 model when my brothers and I were children and we all really loved that car! It was lots of fun researching and then drawing Snuffy's mule, Aunt Sukey, driving this classic Mustang! The only way this could have been more fun was if the research I did actually involved me driving classic Mustangs instead of looking at them online!

When I began my career in the mid-1970s, every aspiring cartoonist built her/his own photo reference library which was fondly called a morgue. Typically it was a file drawer, or in my case, an accordion folder with pouches from A to Z. In it I stuffed photos of anything I might need to draw, torn from magazines I fished out of trash bins in my college dorm hallways. As Kenyon’s editorial cartoonist I was always on the lookout for Time and Newsweek, which would furnish photos of Jimmy Carter or Fidel Castro for caricaturing, but treasured the occasional Field & Stream or Cosmopolitan for more exotic fare. A hardware or department store catalogue was great for everyday objects — you think you know what a socket wrench or a sewing machine looks like until you try to draw it.

When I got a job at the Cincinnati Enquirer and learned that the newspaper’s librarians could furnish me with glossy photos of anything I wanted, retrieved from manilla folders stored on their gigantic rolling shelving system, I couldn’t imagine life getting any better. If I wanted to draw Gerald Ford as Don Quixote tilting at the windmill of Inflation (these were simpler times, kids) a quick phone call brought Ray Zwick scurrying to my office with photos of armor, horses and windmills. Oh, it was the best of times.

Many moons and miles later, Google Image Search is my constant companion, of course. But after all this time I often forego the research in favor of my memory of what things look like. You have to pay your dues studying the look of things, but there comes a point when you might know how to make an elephant look elephantier than National Geographic. 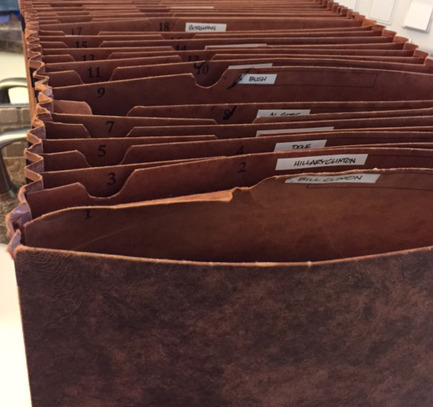 Arctic Circle wouldn’t exist without research. Because it often has an environmental theme, I am constantly checking the facts. I’m lucky that King Features have fantastic editors (hello, Ealish!) who double-check them. At the end of July, there will be a week-long series about climate change in the Arctic and I had to make sure that what I was saying about methane as a greenhouse gas was true. I erred on the side of caution to say it is “more than” 20 times as potent as carbon dioxide. Ealish emailed data that showed it is now thought to be closer to 30 times as powerful. I kept with the original statement, as I’d rather be called out for being overly conservative than alarmist. But it is good to know that, as a syndicated cartoonist, someone is watching my back.

And here’s a comic about climate change research:

Research? Now this is a GREAT topic!! Especially for Mark Trail and I!! I have to do research darned near daily! Regular readers know that wildlife art is a prominent feature in Mark Trail and I wasn't born naturally knowing how to draw every animal under the sun, so, when it comes to research - I use a WIDE VARIETY of sources!!

I seldom use wikipedia for information as it is a "wiki" and anyone can contribute all kinds of things (you'd be surprised at some of the things I saw on the wikipedia page about hammerhead sharks a few years ago! Things I'd rather not mention here). I get emails from National Geographic and other such websites for solid facts, new discoveries, etc. For the actual wildlife art - again, a variety of sources. While Jack Elrod left me several examples of animal art from the strips past so that I can see "how they did it", I find most often that I use reference photos, some of which can be gotten via a simple google search, while others are photos I've personally taken. I have even traveled to places in order to research an animal or plant. I'll get lots of photos, learn from the locals what they think of it ... what they call it (remember that Mark Trail Sunday page on Dodder vines in the Caribbean? I learned about that while I was on Anegada island in the B.V.I.).

I have, on occasion, asked friends - remember Mark's adventure in the Gulf of Mexico? Well, I don't own a scuba suit, but I have a friend who does and he informed me on the details and intricacies of drawing such garb. Likewise on certain guns I have featured in the strip.

Also, I have the BEST readers! They often send me links to something new and exciting that they feel might catch my interest for a Sunday page. Examples of ideas I got from readers are the Brian Spider, Chameleons giving live birth, an upcoming page on Bay Cats, and that's just to name a few.

I have also amassed stacks and stacks of "how to draw" books ... all on wildlife and that collection continues to grow. I recently purchased a Sam Savitt book upon the recommendation from June Brigman (Mary Worth). Mr. Savitt drew horses really well and has a couple of books out on how to draw them (I have several horse scenes coming up in the current story and wanted some reference ... June rides horses occasionally and suggested Sam's book and also offered additional information if I had questions about gear etc.)

Research is vital to Mark Trail - you can't have an animal pictured in an area where it doesn't naturally live (for example, Mark can't look out his kitchen window in Lost Forest and see a rhino!). That's the reason, early in my tenure on the strip, that I sent Mark to Africa - I wanted to draw rhinos, lions and elephants (and a whole bunch of other animals appeared!). Likewise, you can't feature animals at certain elevations if they don't naturally occur there (a recent example - I drew mountain goats up on the craggy peaks they call home near Lost Forest, rather than show them grazing in a meadow)

So, yes, I research ... almost constantly. Jack Elrod once told me "that's one of the great things about this job - you get to keep learning!". Boy, how RIGHT he was!