Ask A Cartoonist: The Brag Bag

Sometimes it's great to be able to toot your own horn a little bit, and this week, I asked our cartoonists to do just that! This week, let's hear about all the cool things that our cartoonists have been up to recently-- or are getting up to in the near future!

I have illustrated a part of my mom’s WW2 story, from Northern Italy in 1942. It is a non-fiction short story that describes how my mom (at the age of 13) decided to join her older brother and his friends in their fight against the rise of Mussolini. It will be coming out this November in the upcoming issue of “World War 3 Illustrated”. “World War 3 Illustrated”  is a political comic book, published annually since 1980. As an anthology comic, it has featured the work of founders Seth Tobocman and Peter Kuper, as well as artists such as Eric Drooker, Sandy Jimenez, Sabrina Jones and many others.

Here is a panel from my mom’s story:

Well, can I re-brag about my 2016 Eisner Award for "Best Artist/Writer" for my graphic memoir, "Invisible Ink"? You can get an autographed copy---with an original drawing by me inside the book, by going here.

Also, there will be a show of comic art related to trains & subways at the New York Transit Museum next year, featuring a bunch of Zippy originals. And---coming soon from Abrams Books---my new effort, "Nobody's Fool: The Life and Times of Schlitzie the Pinhead". Here are a few a sample pages.

I'm really proud of how the Dethany videos are coming off. Of course, I owe a lot to Amy Sweeney's amazing voice talents in capturing Dethany's character, and of course the Adobe Character Animator software that makes it all possible. It's very gratifying to watch Dethany come to life.

In September, I had the incredible experience of being invited to visit Walt Disney's Hometown Toonfest in beautiful Marceline, Missouri. I have been a huge Walt Disney fan my entire life and I was deeply honored and touched to be asked to attend as a Guest Cartoonist along with four other amazing cartoonists. I made presentations about cartooning to students and the community; served as a grand marshal in a parade down Marceline’s Main Street USA; received a career award for my contributions to cartooning; had the incredible honor of planting a tree near Walt Disney’s famous Dreaming Tree on the Disney Farm; toured the Walt Disney Hometown Museum  and the town of Marceline; drew on the walls of Disney’s Barn and the Toonfest office; and had samples of my Snuffy Smith work displayed in an international cartoon art show. But most importantly, we met some of the kindest, most warm, wonderful, Disney-loving people in the entire world! The cartooning award I am holding in the photo features a piece of Walt's Dreaming Tree from the Disney Family Farm in Marceline! It was one of the most memorable weekends of my life!

As a member of the Ketcham Team, I frequently get requests to donate a DENNIS drawing for fundraisers.
Recently, the North Carolina Zoo (a non-profit organization) asked if I would do a painting of Dennis enjoying a day at the zoo. 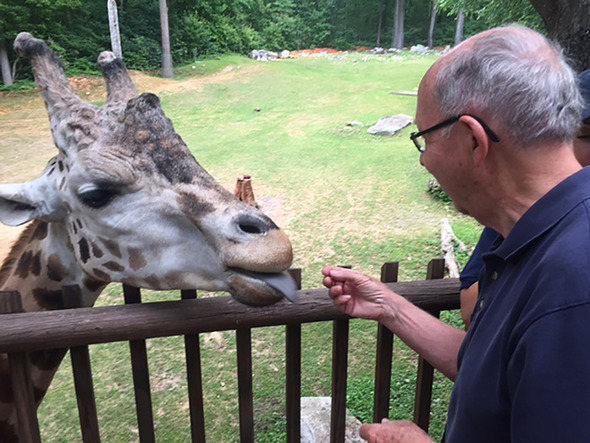 The art would be auctioned at their annual “Zoo-La-La” Event, along with lots of items donated by local potters, photographers and artists. For inspiration, I was given a behind-the-scenes tour…even got to feed the giraffe! The Gala event was fabulous with over 600 attendees! It was exciting to hear that the auction brought in a total of $133,000! 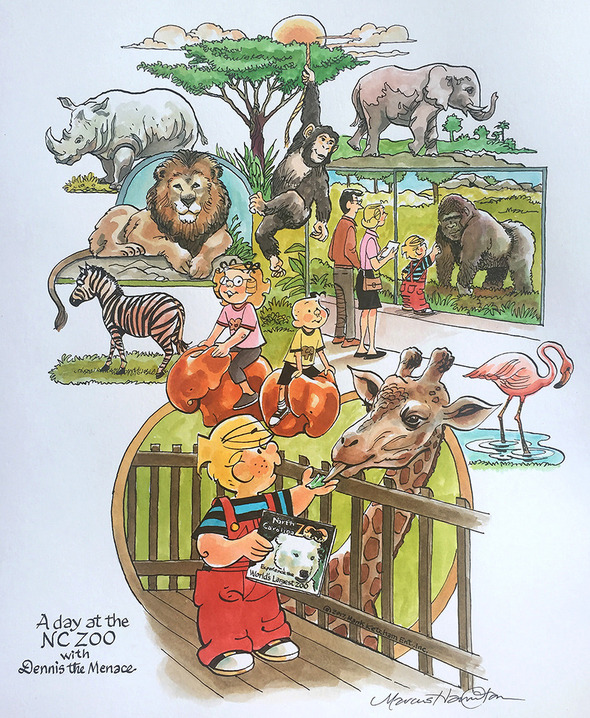 Here's a recent interview I did for my local neighborhood paper, The Southwest Journal.
/The focus was all the local spots in Minneapolis I use for reference in Sally Forth.

"This fall I'm happy to see another one of my graphic short stories published in Pulp Literature Magazine. The piece is actually more of a graphic personal essay, and it's full of drawings. Here's a spot from the story, which I titled "The Vanishing Dot"...
If you'd like to learn more about it, or maybe order a copy to read, here's a link.
Digital copies are also available (Issue 16, Autumn 2017)."