Ask the Archivist: PUCK I

It’s been eighty-five years this week since a huge milestone in the evolution of the newspaper comic section: the creation of Puck - The Comic Weekly.

Long before comics, the major conduit for cartoon art was in once-a-week cartoon magazines, the type pioneered by Punch in the 1840s. Although it was a British publication, it had a vast international readership in the wider English-speaking world.  Many American libraries and colleges had Punch subscriptions into the 1970s, running on snob appeal alone.

Similar American magazines, many outright copies of Punch, were around as far back as the 1850s. In 1871, a man named Joseph Keppler founded an American magazine called Puck, after the character in A Midsummer Night’s Dream. It was larger than Punch, and it used color. It became a major national publication in the late nineteenth century, inspiring its own imitators.  Puck was decidedly a controversial paper, ever engaged in campaigning against Roman Catholic influence and the Tammany Hall corruption of New York city/ state politics.

Other magazines, such as Judge and the original Life, treaded lighter on dividing issues to become the general public’s preferred humor weeklies. That was one reason they thrived and Puck did not. By 1916, it was floundering, not the least for being perceived as having pro-German sympathies toward the war in Europe. William Randolph Hearst bought the troubled publication and added it to his list of magazines that year, turning its editorial direction around just before we entered that war. But, in the end, it was an unsalvageable money pit and was put out of its misery a few weeks before the Armistice in 1918. 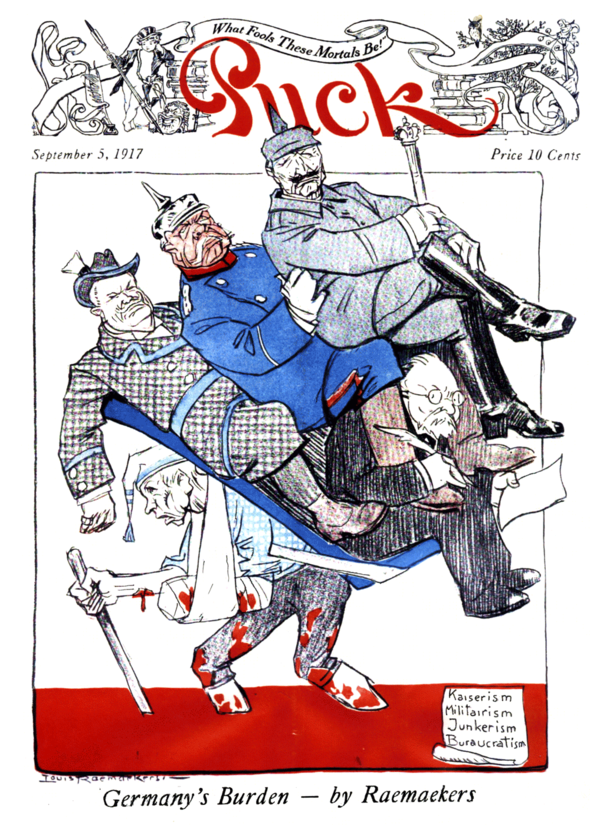 A late issue of Puck after it was acquired by Hearst. Even world-famous editorial cartooning stars like the Dutch Louis Raemaekers couldn’t save the fading publication.

The property laid dormant until 1931, when Puck returned as a brand-name comics section, “Puck - The Comic Weekly.” There have been such things before.  Recall that last week’s entry here displayed several of the Pulitzer organization’s “Funny Side” sections syndicated around the country?

However, the new Puck comics section would not be syndicated outside the Hearst chain. What made it so special was great for the newpapers that had it, but was the beginning of a trend not-so-appealing to its readers—advertising. The bane of all sorts of popular American entertainment, ads were introduced to the funnies in a way they never had been before. It was well known that the comics section was easily the most popular part of any Sunday paper, and had been for years. The geniuses at King Features figured out how to exploit this by making a section that incorporated ads. 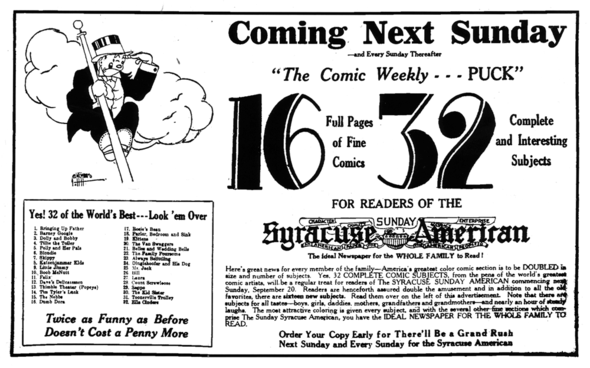 There had been ads in the comics sections as far back as the 1890s, but these were usually the same as regular magazine-style efforts, usually for modest products like talking dolls or “Cloverine Salve.”

The Puck Section offered a lot of comic strip-style ads, intended specially for the Sunday funnies.

The idea took off, an instant success for advertisers. Probably readers didn’t much mind them either, or they wouldn’t have lasted as long as they did. 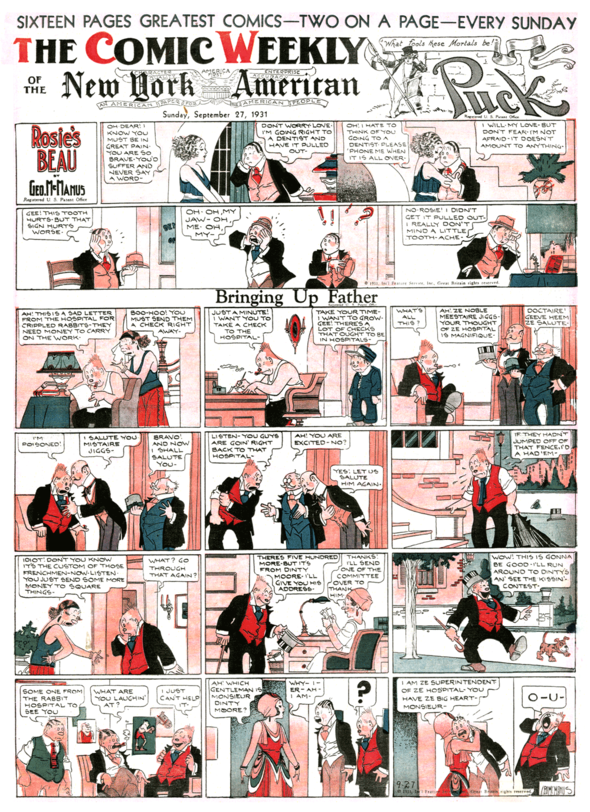 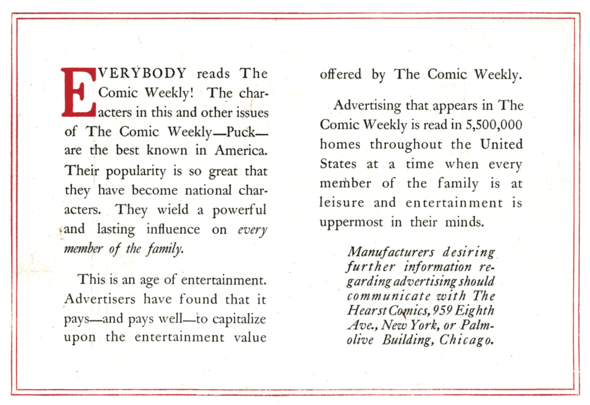 Puck self-promotion in the back page of the section of 29 November 1931.

The ad comics were mainly in two styles, the celebrity endorsement or a cartoon character created just for a series of ads, competing directly with their host’s products. The mass culture celebrities of the day were selling household goods. Most popular were radio stars like Joe Penner, Jack Benny or Amos N’ Andy were seen as cartoon alter egos, probably because they were associated with their sponsor’s products already.  Movie stars were usually seen as a cut above, and were not as commonly seen as comic characters, more often as  single picture add ons, agreeing with the ad’s sentiments.-though were exceptions. Sports star Dizzy Dean had a Grape-Nuts series. Crime-busting hero Melvin Purvis quit the G-men so he could make money hustling Post Toasties. 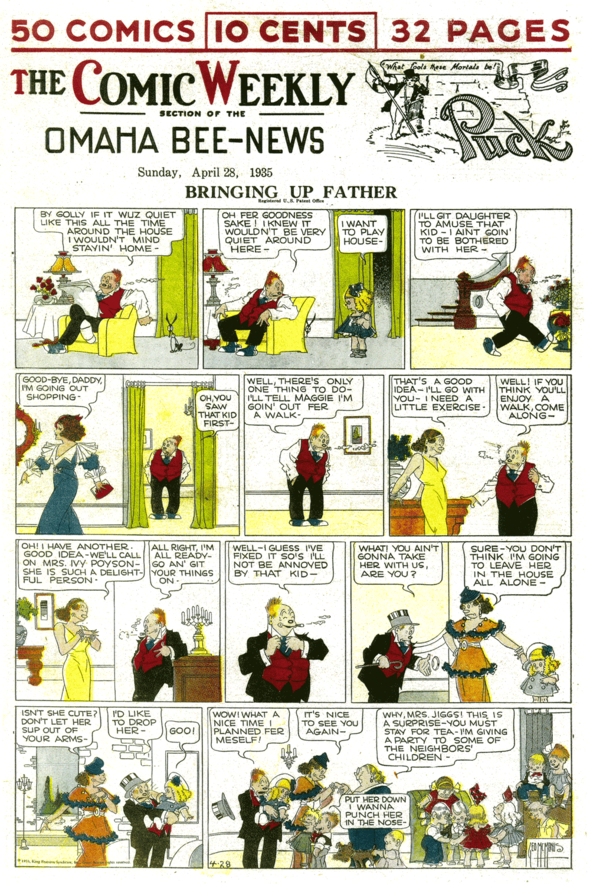 From February to July 1935, the Section’s appearance changed when the Hearst newspapers section changed exclusively to tabloid size, offering new strips as well.
But it was a terrible idea, and changed back to full.

Character creations of the 1930s included Nestlé’s Nest, a bunch of comic teenagers that gravitated to a soda fountain and chocolate bars. Ol’ Judge Robbins dispensed kindly wisdom and Prince Albert pipe tobacco. Professor Kindly coaxed mothers into dosing brats with Fletcher’s Castoria. Peggy Lux went all over the world, hung out with royalty, but always found time to wash stockings with Lux. 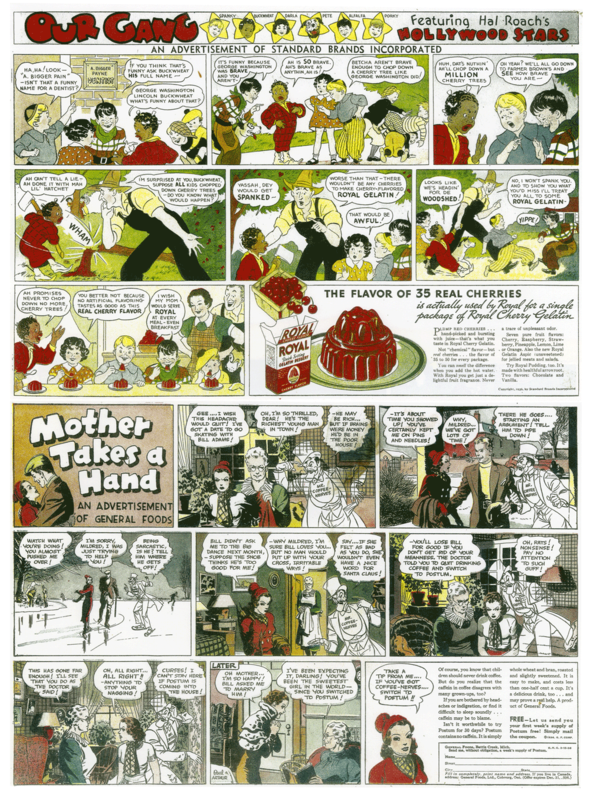 AD COMICS: “Our Gang” endorses Royal Gelatin, 23 February 1936, and the villainous “Mr. Coffee Nerves” is put off his game by a dose of Postum in this pitch drawn by Paul Arthur (Milton Caniff). 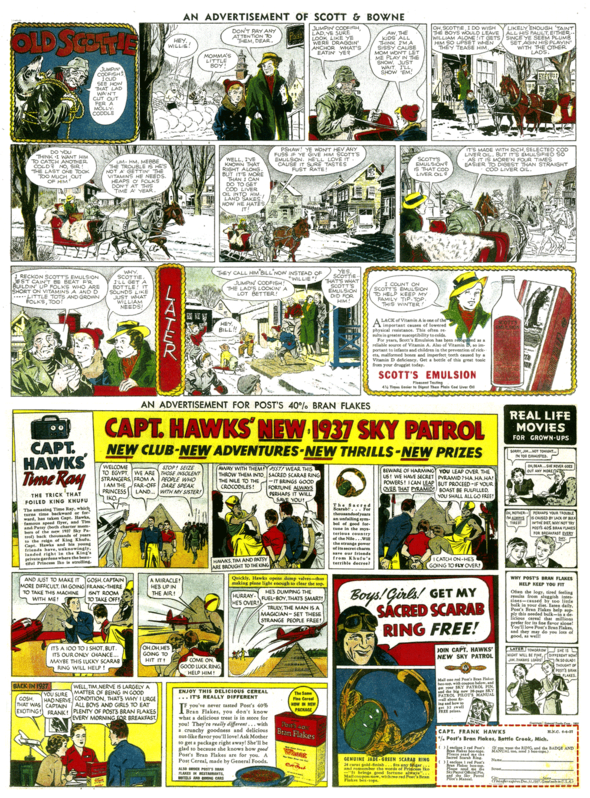 AD COMICS: Above-The prospect of the Scott’s Emulsion (Cod Liver Oil) trademark having his own rather dull comic strip would seem less than compelling, but “Old Scottie” hung around for a few years.
(7 February 1937). Below-Captain Frank Hawks was an internationally famous record-setting pilot,
and in 1937, such fame included lucrative endorsements. This strip carries the sci-fi kid adventure possibilities of a time machine, but pretty much wastes it with an almost fiendish abundance of
tiny type and garish intrusions. (6 June 1937). Hawks would die tragically in a 1938 flight.