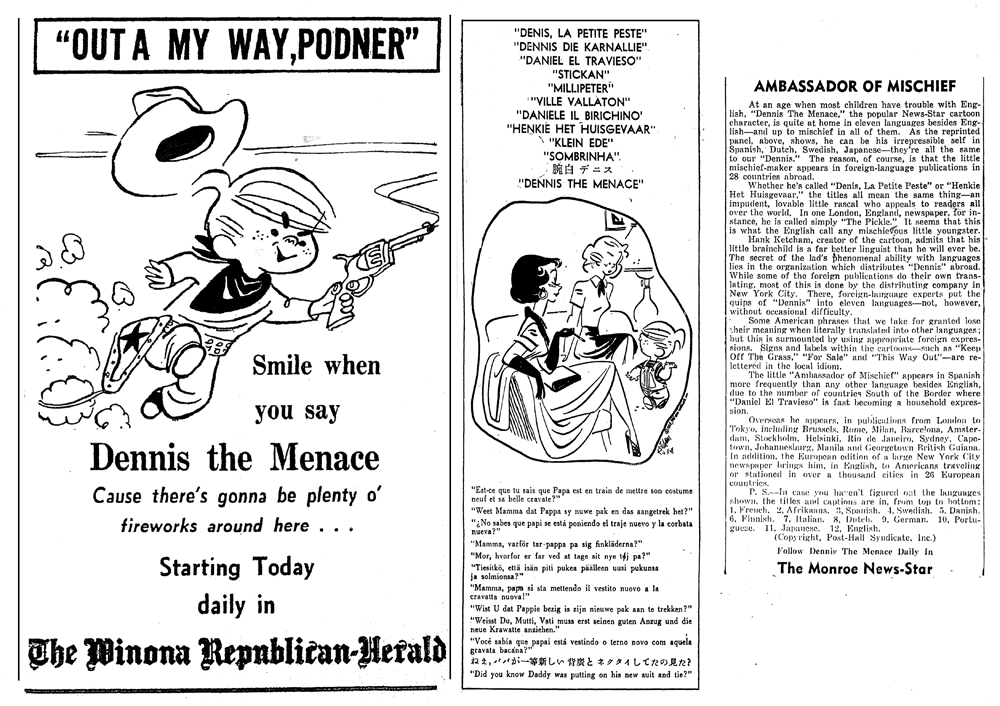 Did you know Dennis the Menace is sixty-five years old, but instead of retirement, he’s still in kindergarten? He hasn’t grown a minute since 1951. His strip, or rather, panel, has been running along nicely without the need for such crimps on fun like growing up.

Hank Ketcham’s Dennis the Menace is one of the most spectacular comic strip success stories, and over the years, lots of licensing and promotions have used him. Today, I’ll just celebrate quietly by clearing out some odd items from my Dennis files: 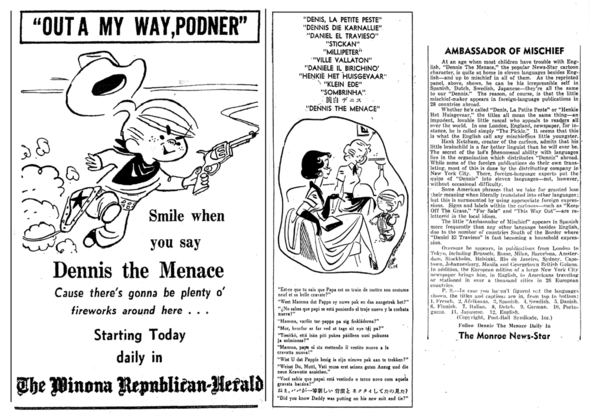 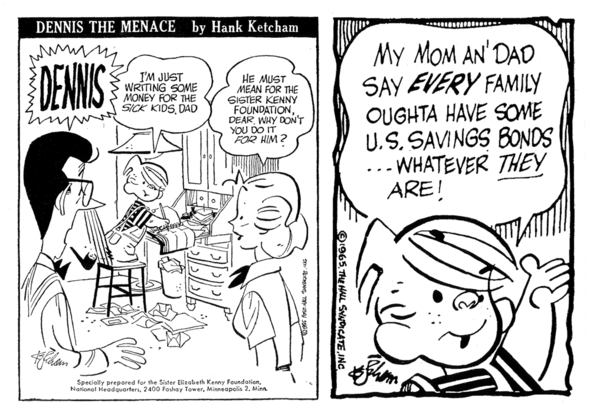 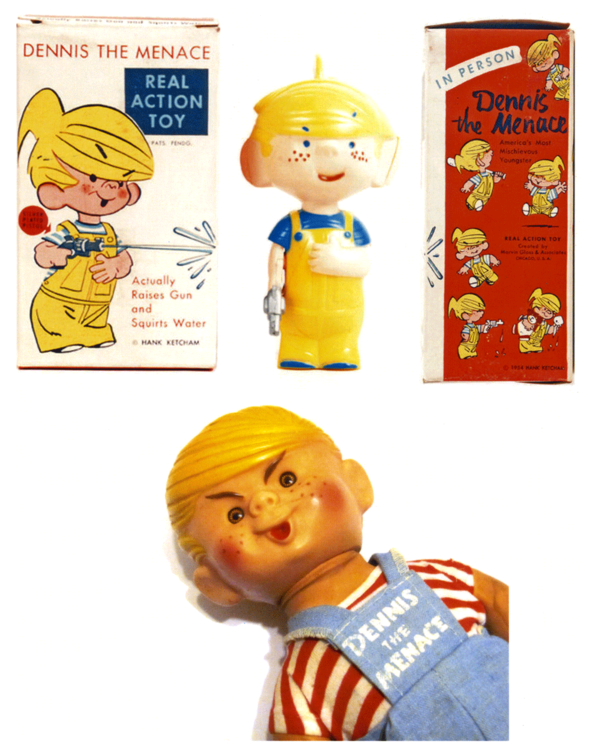 (Above) In 1959, when the Dennis TV show premiered, Ketcham did this ad for the series, but I’ve never seen this version of this picture any other time but this, for WGAL-TV (Lancaster, Pa.) in a January 1960 TV Guide. More commonly seen is where CBS modified it so Dennis is holding a photo of star Jay North, instead of the TV set. (Below) Jay himself does an endorsement for a boilerplate local bank ad. 1962). 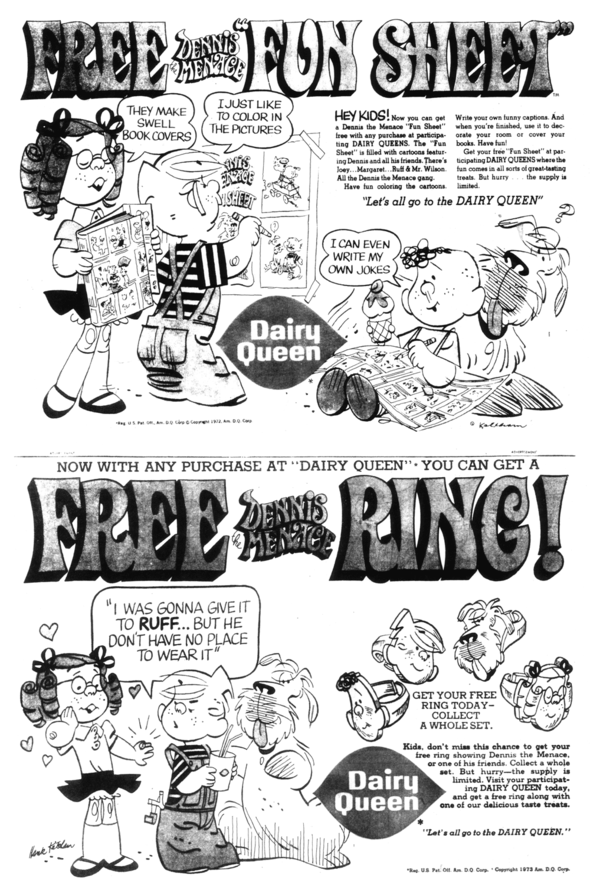 For years, Dennis was the spokesboy for the Dairy Queen chain of ice cream shops.
Two premium offers (1972 and 1973) seen here. 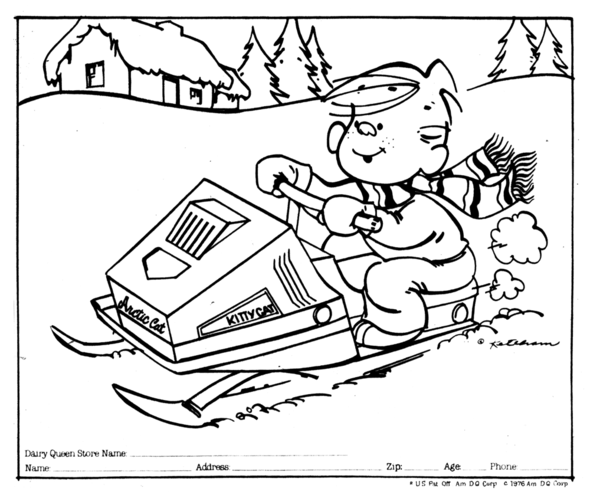 A 1976 Dairy Queen coloring contest picture, with a snowmobile as a first prize. Dennis famously has named his family’s cat “Hot Dog,” so to make up for it he named his snowmobile “Arctic Cat” AND “Kitty Cat.” 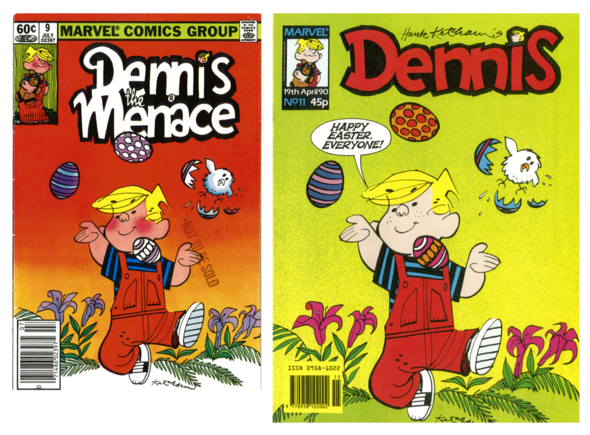 (Left) American comic book (1982).Guess Easter was in July that year. (Right) The U.K. version, (1990). So as not to compete with the British character also known as Dennis the Menace in Britain, sometimes the name of the American import is known as “Dennis," "Dennis Mitchell” or “Just Dennis.”

P.S. Lest you think we forgot? Here's the Mail Bag for this week!

To Bernie, Cameron-
I would have included the Dennis page in our Bicentennial minute last week except I don’t have that Sunday. The dailies had him in an actual 1776 setting, pulling off the shenanigans usually reserved for Mr. Wilson on the redcoats instead. The Hi & Lois page didn’t mention the day, in fact it was a Ditto at Little League gag. I don’t think Dik Browne or Mort Walker forgot, I think maybe they had their eye on how well the Bicentennial would play in international syndication.
To  David Colp-
That Blondie page did stand out. I wish I had the color plates of it.
To FresnoDick,  -
You’d be surprised at how easy it was to get fireworks once. I’ve known men who were permanently injured as children because fireworks were so irresponsibly accessible. Having said that, when I was a kid, although there were many laws by then, we never seemed to lack for cherry bombs and bottle rockets. Some of those things were military grade!
NOT-SO-FUN FACT: Kids with fireworks started a fire that burned
down half the city of Portland, Maine in 1866.
To Fearless Freep-
Felix I have not gone into yet- I will try for one soon.
To Timothy Fisher, Cameron1988-
Well, I’m glad you liked the theme, but I’m trying to think of a worthy one. Usually I do one of a historical date, you’ll remember I did several about WWII, and the day Kennedy was done in. I will definitely have one ready to commemorate that dark day we commonly refer to as “9/11” come September.
As for more Bicentennial ones, Mr. 1988 is right, they didn’t all celebrate the day. The Snuffy strip that day showed Tater being given a jack-in-the-box. As mentioned above, the international markets aren’t necessarily hip to American holidays or customs. I recall a Canadian paper back about 1930 trying desperately to alter a “Gumps” strip about Independence Day, swapping it into being about Dominion Day, even crudely doing over Old Glory into the Union Jack. Usually, the international markets would be running material stale anyway, so they could skip the holiday effort entirely.
Strips like Little Iodine and Dooley’s World probably didn’t have enough international clients for it to matter. The Beetle strip is actually just short of being about Independence Day, and doesn’t mention it. My guess about Blondie is that though it has many international clients, the flag joke works because everyone takes the Bumsteads to be American and America is its fixed location; it’s the story of funny Americans. Just like there’s no doubt of what and where say, Andy Capp or Hagar the Horrible is about, throughout the world.
Yours,
THE ARCHIVIST.