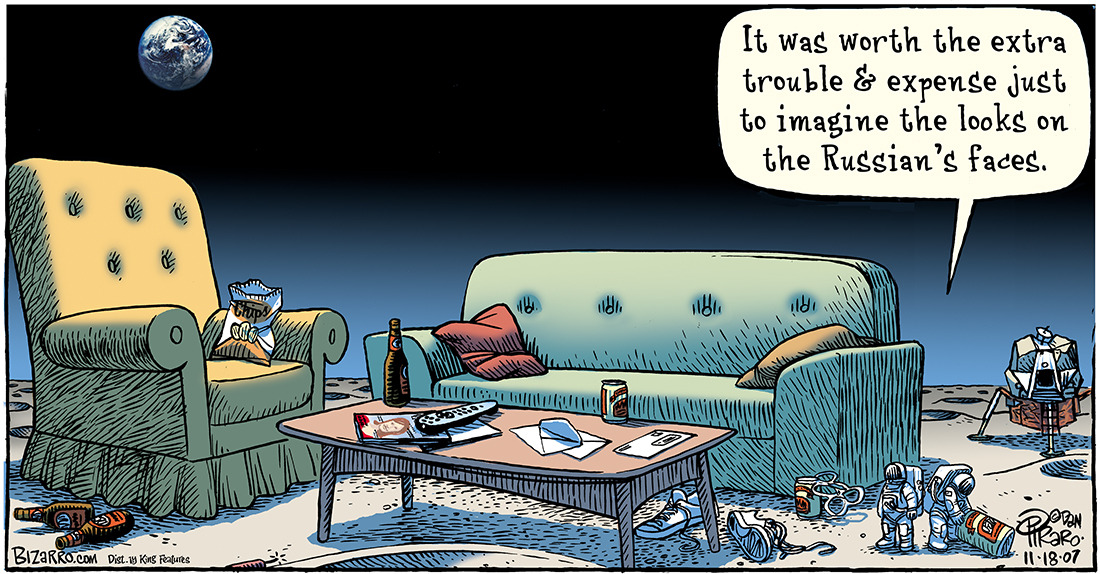 Everybody loves outer space! Cartoonists spend so much time looking down at their drafting tables that of course they enjoy looking up at the stars. This week, I asked cartoonists to share their favorite outer space stories and comic strips.

The nearest place where I can go and gaze into deep space is the University of Toronto's Astronomy Building which houses a couple of telescopes. Being situated in the downtown area, there is a problem with light pollution, however, I've been able to see Mars pretty nicely, and an interstellar dust cloud or two. I love it up there. In fact, I love it so much I did a book that covers most of what we know about outer (and inner) space!
Here's a little spot drawing showing the character Maxwell from my book "Quirky Quarks: A Cartoon Guide to the Fascinating Realm of Physics." 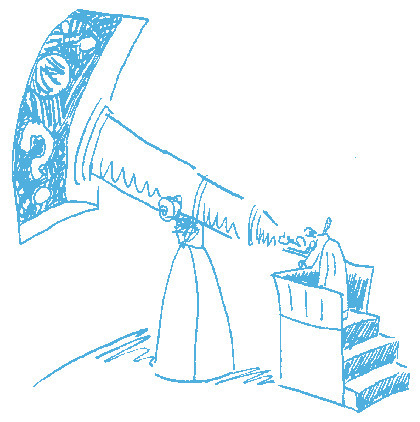 I've loved space ever since I was a little kid. I used to stargaze through my telescope, especially during the summer, looking at the planets as best I could, the moon, and more importantly, looking for UFOs that might be swirling about!

I look for any excuse to draw space-themed stuff in Intelligent Life, and this is one of the strips I had a blast drawing, based on stuff I totally sit around and think about.

The gang in Safe Havens has been preparing for a three-year mission to Mars, launching in January of 2018. While the spacecraft is being assembled on the other side of the moon, filmmaker Ming visited the site to document its construction.

I’ve done tons of cartoons about aliens and outer space over the years but this one remains a favorite. How fun would if be if NASA engaged in monumental practical jokes? 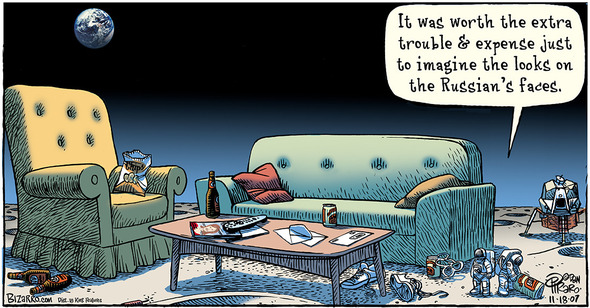 Zippy commutes from inner space to outer space--- and back--- on a regular schedule.
And all without the help of booster rockets, heat shields or NASA!

Moon Trees are trees grown from some 500 seeds carried to the Moon by astronaut Stuart Roosa onboard Apollo 14 in 1971. Roosa had been a smoke jumper before becoming an astronaut.

As part of America's bicentennial celebration in 1976, scores of Moon Tree saplings were planted in parks, state capitols, universities, and historic sites all across the country.

I've seen all six of Florida's Moon Trees and love to seek out others to snap a photo whenever I travel around the country. I've found Moon Trees in Birmingham, Philadelphia, Sacramento, Pisgah National Forest, and most recently, a second generation sapling at Arlington National Cemetery near Col. Roosa's grave. Some are marked, some are just there, standing silently as living monuments to man's lunar sojourns.

More on Col. Roosa, plus a list of Moon Tree locations can be found here... 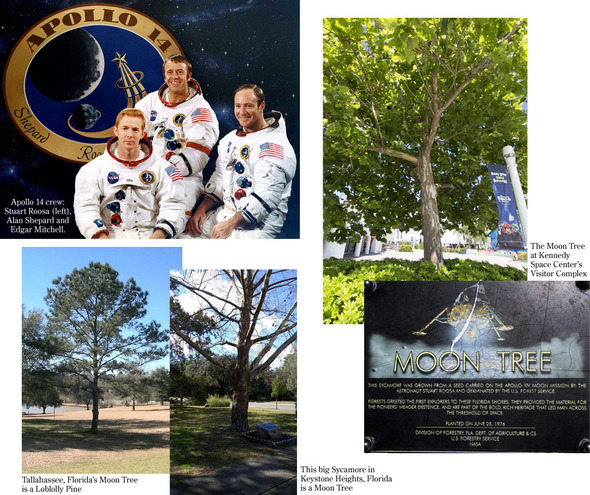 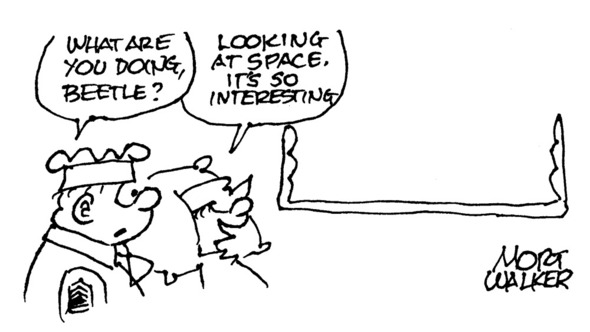 This Barney Google and Snuffy Smith comic strip of mine from a couple of years ago has become one of my favorites. I simply love Snuffy's statement in the first panel, " Behold th' bodacious cosmos...!" It sounds like it could be the narration for the opening of a documentary about space!

Heck, I know all there is to know about outer space. Here's a strip from 2005. If you want to see the whole story go to my blog.

In 1959, Hank was WAY ahead of the curve on the Moon Landing. 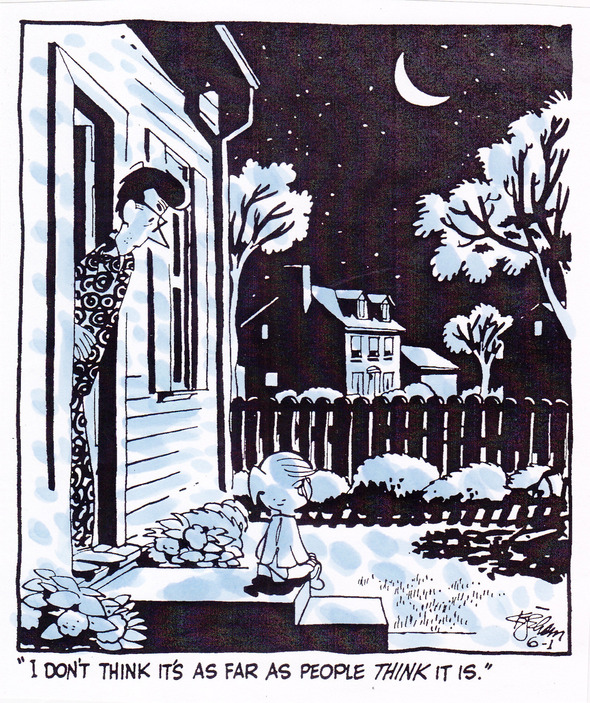 As a little kid, I loved all things space related (even the Holst Planets Suite) and the kid in me got super excited about Juno reaching Jupiter. It’s going to be great when they have analysed the data from that.

Sometimes the penguins venture into space, though often not intentionally.

There is SO much I could tell you about my love of space and my cartoons. Growing up during the 1960s I was, like a lot of kids, inspired by the space program. I came to believe that if man could go to the moon then I could become a cartoonist. I mean, I also wanted to be an astronaut, too, but I wasn’t that great at math. Haha. Also, I grew up hearing stories from my dad about his brother, my uncle, Ed Koterba. Ed was a syndicated columnist for the Washington Post and Scripps Howard, and a member of the Kennedy White House press corps. So I heard all these stories about his writing about space and how he interviewed Wehner von Braun--the father of the Saturn V rocket—the one that would launch man to the moon. Ed was also one of the reasons I fell in love with newspapers. Sadly, my uncle was killed shortly after I was born so I never got to meet him.

Also, my dad was a space junky and part-time TV repairman. So he would let me stay home from school on Apollo launch days so I could watch live coverage on all of our TVs—like our own little newsroom!

I even had my own newspaper and came up with a dog character—Dogie. Shortly before the first moon landing I declared in my little newspaper that Dogie was the first dog on the moon. Until I went to the store and saw a display of Snoopy dolls—Snoopy dressed as an astronaut. The signs said that Snoopy had already gone to the moon. I was devastated and declared to never draw Dogie again.

As an editorial cartoonist I will draw about space as often as possible or use space travel as a metaphor for another topic I’m drawing on. In 2007 I received an email with the subject line: Greetings from Space! I thought it was a joke or spam but it was from Clay Anderson, the Nebraska-born astronaut—who was at that time on board the International Space Station. He was writing to say that someone had beamed a cartoon I had drawn about him to the space station. And that he loved it. We became friends and a few years later, when flying aboard space shuttle Discovery, he took two of my original drawings on board. One of which was a cartoon of Dogie, my childhood creation.

I write about all this and how I became a cartoonist in my memoir, published with Houghton Mifflin Harcourt https://www.amazon.com/Inklings-Jeffrey-Koterba/dp/B005SNJD70 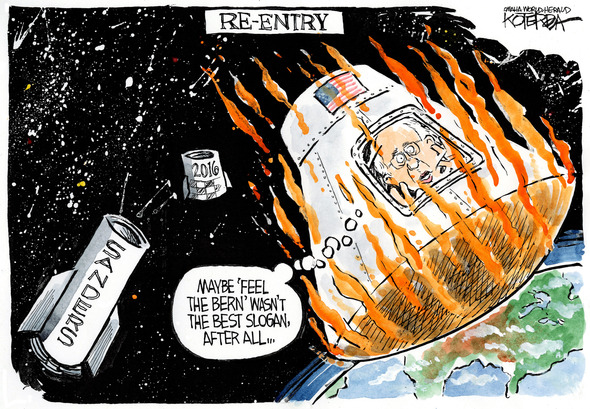 In the mid-90s I created a curious weekly feature called Wonk City at the request of Meg Greenfield, editorial page editor of the Washington Post. It was eventually valiantly syndicated by King Features and ran a couple of years. Wonk City was an insider’s look at beltway politics, never mind that I drew it from Cincinnati without visiting DC once. Such an odd little chapter of my career.

Anyway, here’s a Wonk City with some cool space imagery. Travel back in time with me, if you will, to the Clinton administration... 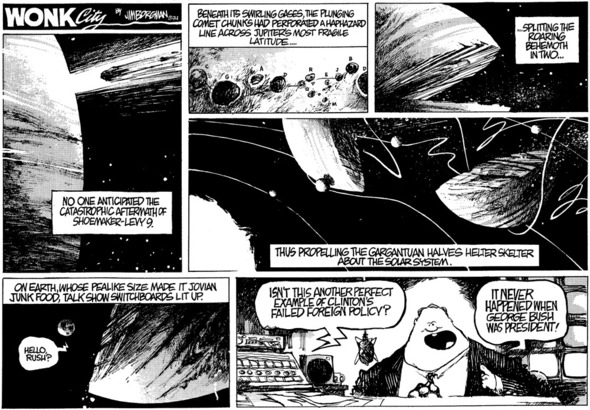 Those of you who read Edison Lee regularly know I like to write about space as much as possible. Stories of space exploration have always fascinated me, beginning almost 39 years ago when NASA launched the Voyager 1 probe. I wrote the attached strip while visiting the Smithsonian's National Air and Space Museum with Anne and fellow cartoonist Greg Walker. One reader kindly wrote to me after the strip ran informing me that three-legged tables don't wobble. That may be the case on earth, but do we really know how these things behave in other galaxies? I think we need to send out another probe to try and find out.