Yesterday was World Press Freedom Day. And while we sometimes forget that comics owe so much of what they are to the press, cartoonists and their work is intrinsically tied to the press, and issues of freedom of speech in journalism affect the creators of comics in the same ways they affect people who write news articles.

Editorial cartoonists, of course, are responsible for some of the most powerful journalism we see-- images that we remember for the rest of our lives, perfectly timed to capture a moment that affects all of our lives. But even the most lighthearted comics owe a debt to a free press which allows people to be authentic in the jokes and stories they share.

This week, I asked our cartoonists to talk about the importance of a free press to their work.

Freedom of the press is crucial to a democratic society. But freedom to read the news ON PAPER every day is just as important. Eyestrain aside, news online comes and goes in a few seconds, lost forever in the cloud. One thing equals another on the glowing screen with nothing but tabloid headlines grabbing our attention.

While on paper, news---and comics---hang around for weeks at a time, awaiting the accidental eyeball that may alight upon it as it's folded into the birdcage or used as lining for the kitty litter box.

When I first started working with Jack Elrod, we were looking back through the catalog of the various Sunday pages that had been featured through the years, when I noticed something strange - there were no Sunday pages ever done about snakes. I asked Jack why this was - surely the fascinating world of the legless reptiles would be a perfect fit for the educational Mark Trail Sunday pages! Jack responded simply- "snakes don't make good breakfast conversation".

I understood, Jack was referring to a time when people read the paper first thing in the morning, over breakfast. I didn't necessarily think that was the case anymore. People these days are "on the go" and, thanks to technology, more "connected" than ever. People are getting there news in a variety of ways, along with their comics... not necessarily first thing in the morning, over breakfast anymore!

Some time later, I read an interview with Mort Walker in which he discussed censorship. The line that stuck out in my mind was when he said "and I couldn't draw snakes"... then it hit me! Apparently at some point in syndicated comics, it was an understood rule to not portray snakes, as most folks don't care for the animals! Made sense to me! Then I started to think - times have changed tremendously throughout the 20th century - and now, in the 21st, there are television channels based solely on the flora and fauna of our world! You can certainly turn on the TV and immediately learn about anything - lions, tigers, bears, spiders, and, yes, even snakes! I felt confident that times and peoples mindsets, and even the PRESS had changed enough, so, I decided to do a Sunday page on snakes - the FIRST in Mark Trail history! To top it off, I even featured a scene of a huge snake fighting an alligator. My snake was going to be accepted or it was going to be a total failure! I am pleased to say that the page ran during October ( I try to do a month of "scary" animals in October because of Halloween) and even more pleasingly, some folks took note - appreciated the page and noting that they didn't recall a Sunday page on snakes in Mark Trail. So, I guess, in this instance, freedom of the press allowed my freedom of expression to give Mark Trail readers something they hadn't seen before!

This was an instance where Hank was really excited about keeping Dennis in ‘Menace’ mode. He thought having Dennis use the contemporary jargon would be the way to go. The editors, however, had a different take. They thought Dennis’ phraseology was a little TOO contemporary and asked Hank to provide an alternate caption to give each paper a choice. I think the final tally was about 50/50. lol! 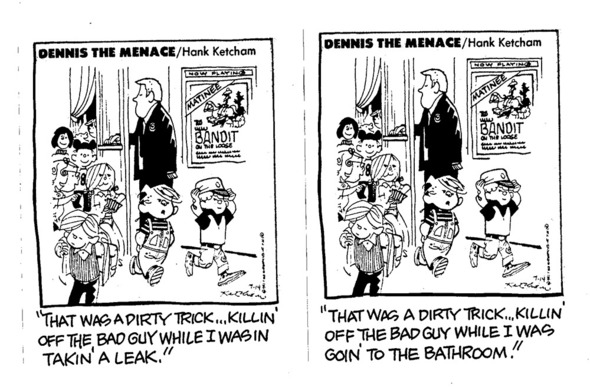 I think it is fantastic that I am able to criticise the lack of government action against climate change, without fear of reprisals from government. Instead, I am happy to weather the storm of climate change denial in the comments section!

I grew up reading Esquire Magazine where most of the cartoons dealt with secretaries suffering from the sexual advances of their bosses. They sat in his lap when he dictated his letters; for instance. I guess a lot of this was real in those days but women have more rights these days and they found these cartoons objectionable. Women editors began to object to this "humor" and I began to lose a few papers. 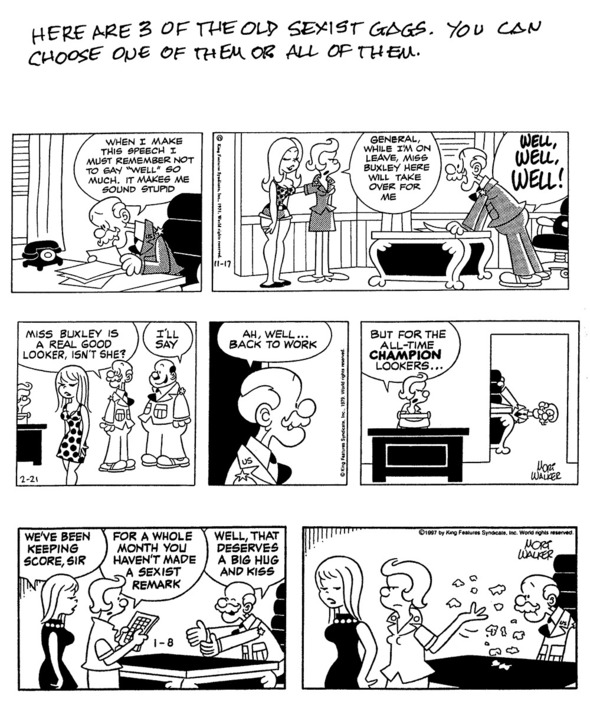 That was the first that I realized I was offending my readers, and I decided I had to do something about it. I sent General Halftrack to sensitivity training and changed all of his bad actions and emphasized all of Miss Buxley's innocent and lovable traits and she became one of my favorite characters with the readers.

My troubles worked to help me in the long run.