Ask The Archivist: THE FAMILY FOURSOME 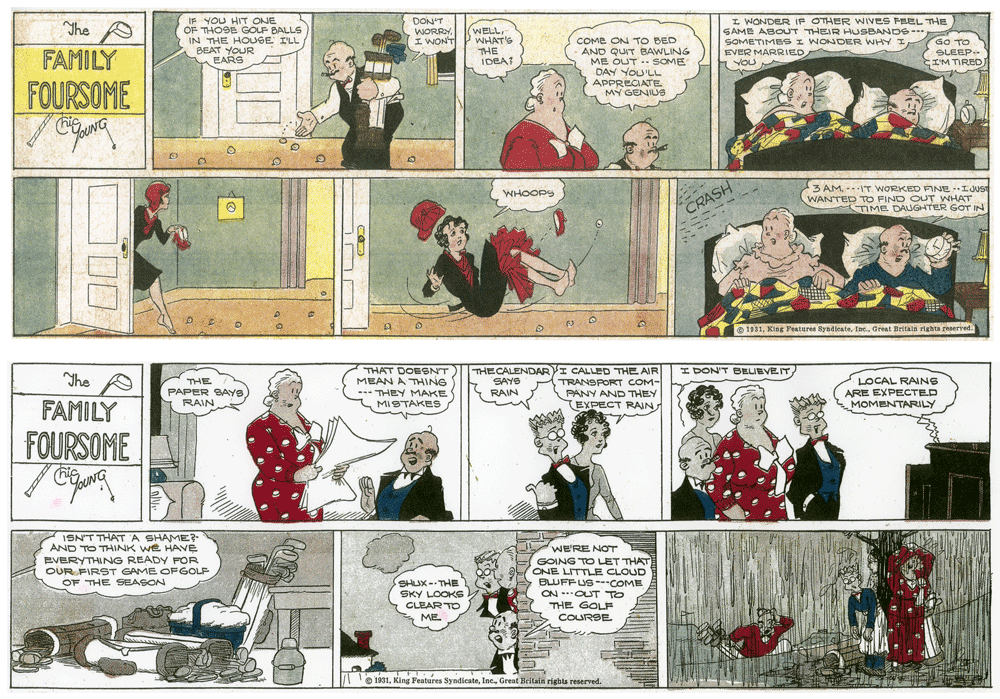 It’s such a nice day, why don’t we just go out and  belt a bucket of balls down at the driving range? First, we’ll stop off at the short-lived top strip to the Sunday Blondie page, The Family Foursome. This was the first of the toppers when Blondie was created in 1930. Creator Chic Young had experienced doing two Sunday strips before, when he added “When Mother Was a Girl” to his previous series, Dumb Dora. See:

With Blondie, Young kept going with what he had by then become a master craftsman of, the funny flapper series, but with this fresh start, he decided on new territory, a family strip. So began The Family Foursome, which as hinted by the title, was about a golf-obsessed clan by the name of Jones. (A paean to the reigning king of the links, Bobby Jones, no doubt.)

In the 1920s, golf was still considered a sport for the upper classes, and its growing popularity was due to the expanding population of successful middle class businessmen with leisure time and upward social status. Important figures like President Harding and billionaire oilman John D. Rockefeller were happy to be seen swinging a niblick, so why couldn’t everyone? So the Joneses took to the green.

There were other golf-themed strips, now quite obscure, like Layon MacDuffer, The Meadowlarks, and  In the Rough. The Family Foursome may have inspired another golf Top comic, Vic Forsythe’s Divot Diggers, which sat atop his United Features series Joe Jinks. (1931-41).

Trouble is, golf is just not a universally appealing, bottomless barrel of laughs. It wears thin and it really can’t go on and on and stay good. But then again I may be wrong. For instance it’s beyond my ken how there were many years of various card-playing strips. Anyway, the foursome got stale and though the Jones bunch spent less and less time golfing, Young was able to see he’d gone as far as he could with them in 1935, when he replaced them with the happy surreality of “Colonel Potterby and the Duchess.” See:

Here are some of the funny frolics of The Family Foursome: 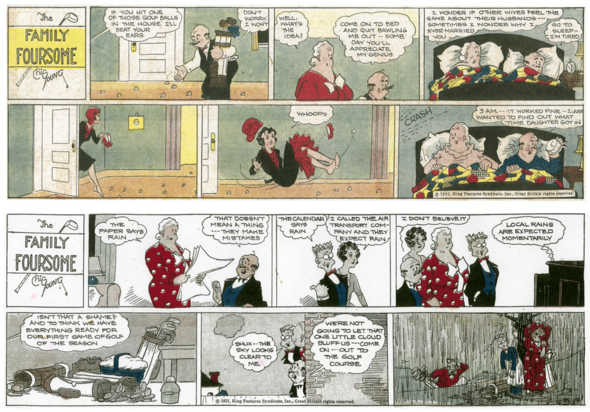 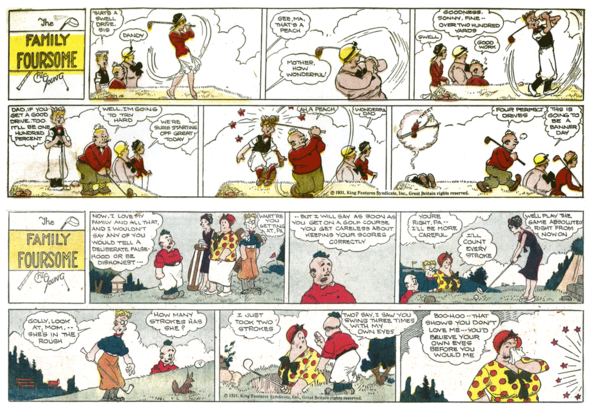 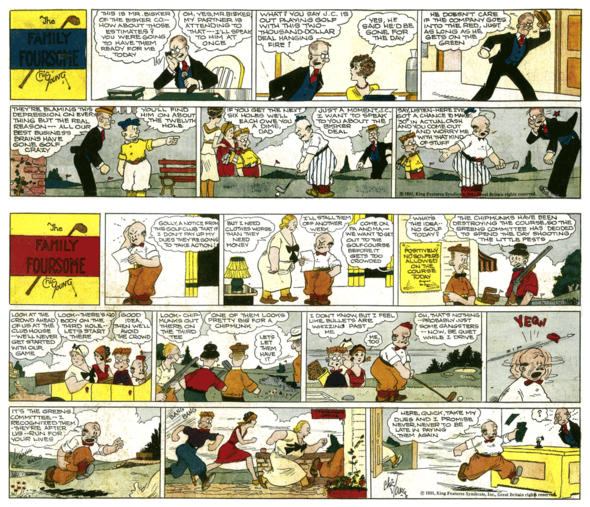 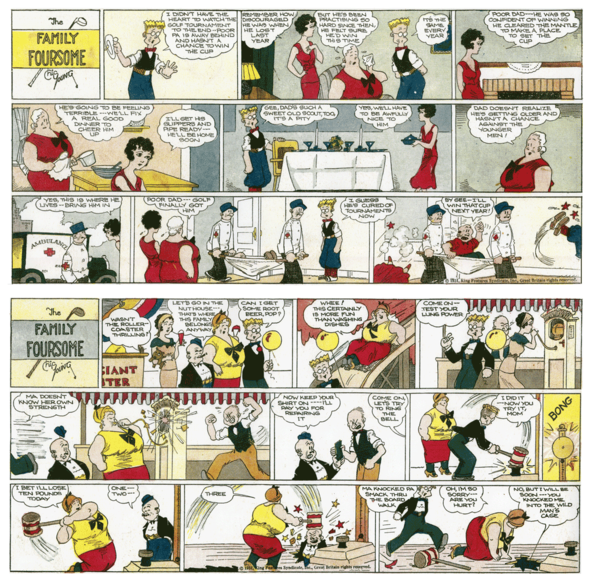 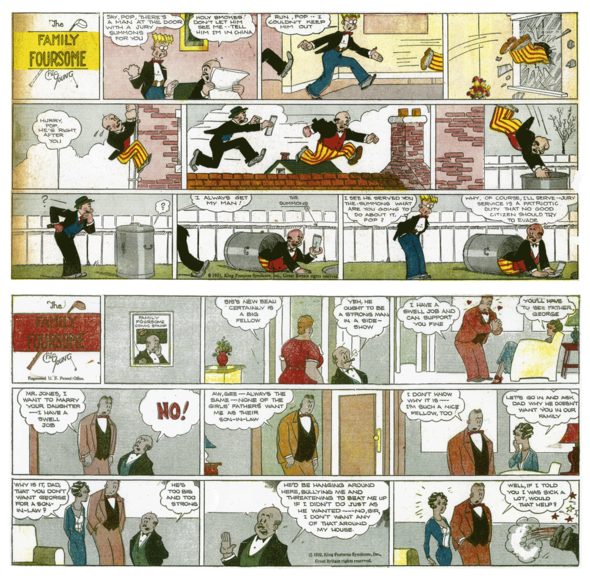 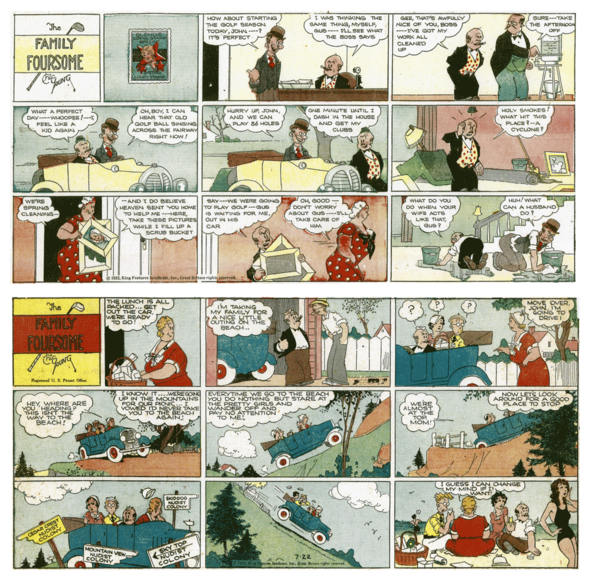 It's time for the Mail Bag:
WARNING: The following letter has the word Nebula in it.

We still have some series yet to go, but I’m afraid not many are continuities. Are there holes in the archives? You bet. Black holes that dwarf the Crab Nebula. We have probably better back files than most syndicates, but as I’ve said before, we saved things we didn’t own, and now can’t use,  and didn’t save things we do own and could use, for various reasons. But we only started saving stuff in the mid-1930s anyway.

Alas, we have no system for contributions to the files. As a longtime collector, I understand the urge to share and actually make some meaningful use of your aging agglomerations of nifty newsprint. That’s why you see from time to time selections here from my own personal collection. If there’s something I find that is absolutely urgent, I’ll toss it out sometime.

Now, on to the clubhouse--and don’t forget to tip the caddy.