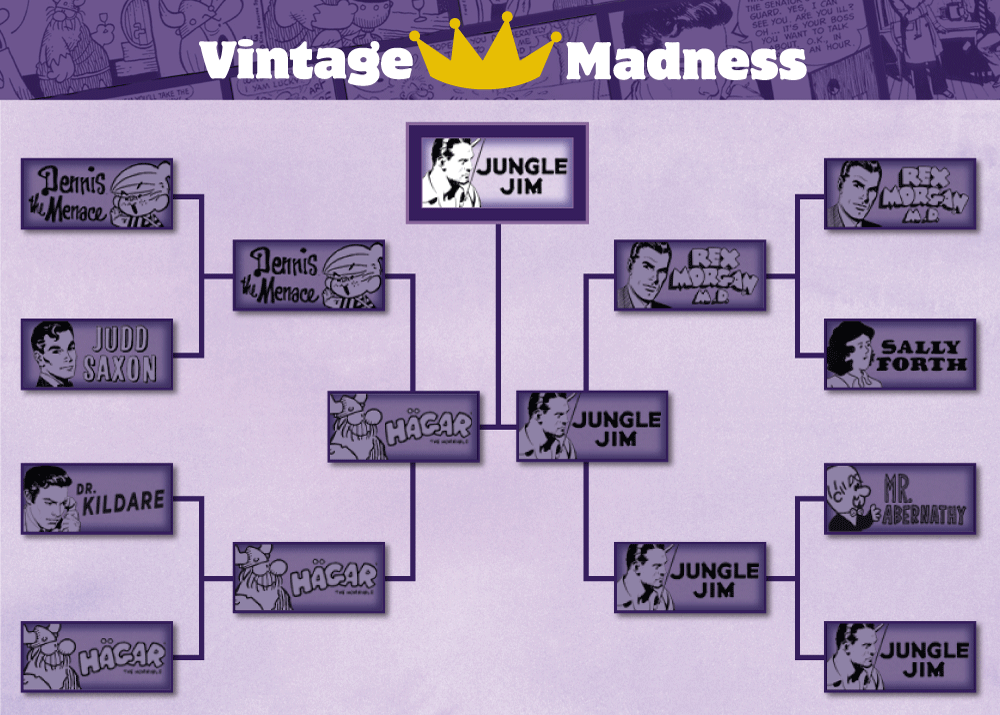 “Jungle Jim” beat “Hagar the Horrible” by a mere dozen votes to secure a highly coveted spot in Comics Kingdom’s Vintage Comics section.  I actually showed the first episode of “Jungle Jim” in one of my previous “Archivist” posts about the debut of "Flash Gordon." You may read that full post here.

I actually showed the first episode of “Jungle Jim” in one of my previous “Archivist” posts about the debut of “Flash Gordon.” You may read the full post here.

* “Jungle Jim” began the same day as “Flash Gordon,” 7 January 1934. Raymond drew it from then until April 30, 1944 when he went into the Army. Austin Briggs and then Paul Norris rode it out until it died of Jungle rot in August 1954.

* Jim Bradley is the classic pith helmet adventure character, a big game hunter who encounters various bad guys and defeats slavers, smugglers, bandit gangs, and renegade animals along the way. Since he spends most of his time in the wilds of Burma, Ceylon, and Indo-China, it’s only natural he became a guerrilla fighter against the Japanese during WWII.

* His lifelong companion is Kolu, a Hindu native who wears a turban, and calls him “Tuan Jim.” He’s the equivalent of Tonto.

* In 1937 a twelve-part Universal serial based on JJ starred Grant Withers.

* In 1948 a Columbia feature titled “Jungle Jim” starred Johnny Weissmuller, and they used him again for a one-season (1955-56) TV series produced by their “Screen Gems” unit. (Note this was after the strip ended).

Here is a sneak peek at our newest vintage comic offering:

Thank you so much for voting and participating in our 2016 Vintage Madness. We hope you had as much fun as we did! We will be adding “Jungle Jim” to the Vintage Comics section in the coming weeks. Please continue to follow “Ask the Archivist,” and stay 'tooned. I will let you know when the comic will officially be available for your reading pleasure.