I did the first Zippy strip in 1971. A few years later, he took over as my main character.
But in those early Underground days, Zippy was appreciably more wild & crazy.
He hadn't met Griffy yet, so his non sequiturs were totally untethered.
Insanity reigned. Satire took a back seat. His head was pointier.
Here he is in 1973, in his first t-shirt design. Enjoy. 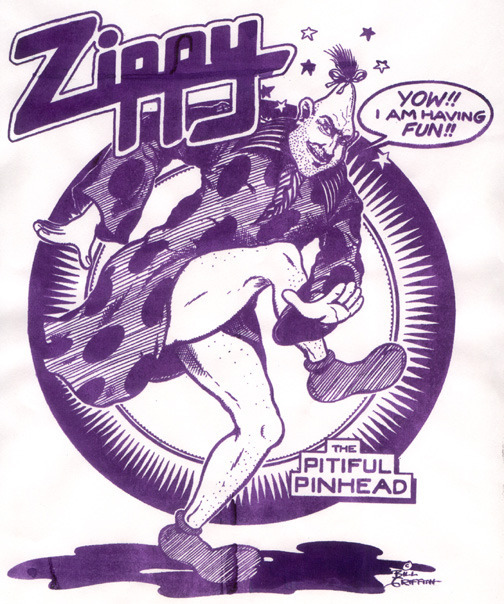 I grew up reading Esquire magazine where the boss always chased his secretary around the office and dictated letters with her sitting on his lap. It was standard treatment of secretaries in cartoons. When I started drawing Beetle Bailey, the General treated Miss Buxley the same way. But when female editors and television personalities took issue with the way the General treated her, I realized what I was doing was out of date and I had to change. I toyed with the idea of bringing in a new General who would treat Miss Buxley humanely but one of my children said, "Why don't you send the General for sensitivity training?" Good idea. I did it and it made everyone happy, especially Miss Buxley.

Although the design of the whole DENNIS cast evolved over the decades under Hank’s watchful eye, Gina’s metamorphosis was probably one of the most dramatic, as seen in these two panels spanning 31 years. 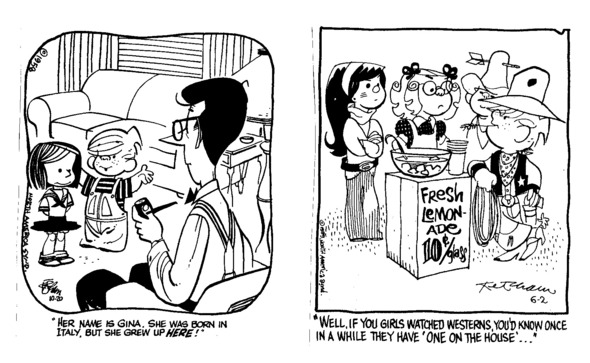 Both "On the Fastrack" and "Safe Havens" have departed radically from their initial conceptions. The original star of "Fastrack" was Bob Shirt, a young man who now only occasionally appears in large meetings. Even more extreme was the evolution of "Safe Havens" from its debut as a strip set at a day care center. Here's one of its very earliest strips, from when Samantha and Dave were four years old. They'd had quite life together.

I didn’t do it consciously, but my characters have evolved in the 8 or so years Arctic Circle has been syndicated. The ones from back then look weird to me now. Especially the penguins.

Computers, TVs, phones...every thing now is flat, black and a rectangle. Here's a strip from 2011:

When I started Tina’s Groove, I drew the tables of Pepper’s Restaurant without tablecloths. What I hated about the way I was drawing them is that I had to draw peoples’ legs, and the table legs underneath, which made for a messy/busy looking area that was completely unnecessary to the drawing as a whole. There were just too many lines there that I could do without. If you look at these two quick sketches, you can see what I mean: 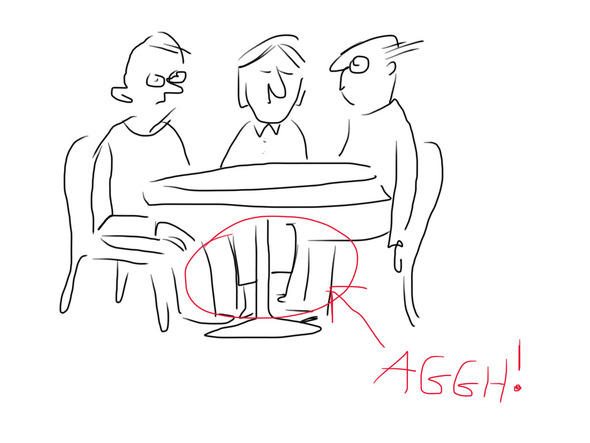 Why fuss and waste time with unnecessary details— especially if doing so might add an ugly-looking area in my overall drawing? I nipped the problem in the bud with nice clean tablecloths. It was so early in my strip’s life (not even the Comics Kingdom Archives have those earliest Tina’s Groove strips!) that no one noticed. 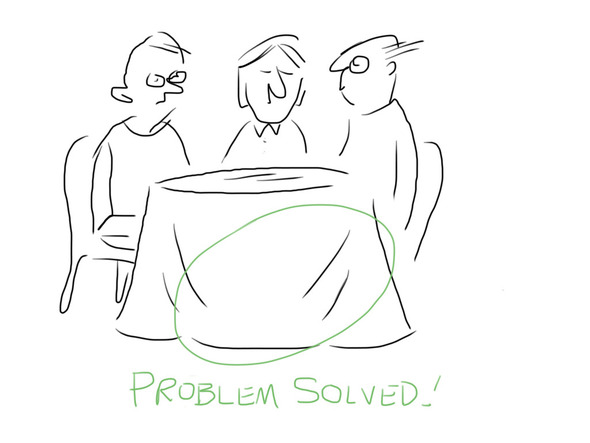