The cast of The Katzenjammer Kids was thinner before 1936, and today we’ll pay tribute by marking the change on its eightieth anniversary.

The Katzenjammer Kids as originally conceived by Rudolph Dirks in the late 1890s consisted of three boys, then two and a Mother and Father. Here’s the first one:

But early on, the father and extra brother left, and der Captain and the Inspector were added to the lineup, in 1902 and 1905, respectively. 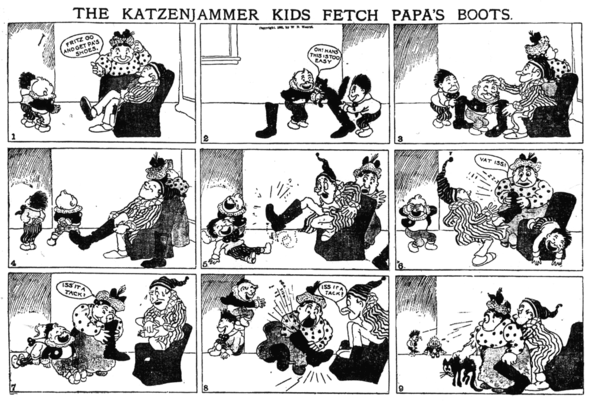 Hans and Fritz played no favorites in their mistreatment of
dear old Dad over Mamma. (13 January 1901)

From the 1900s to the mid-1930s the Katzenjammer gang had long adventures through the Dirks years and into Knerr’s, in different parts of the world, notably gold hunting in the Wild West, searching for the North Pole  in the Arctic, and finally settling on “Bongo Island” in the “Squeegee Islands.”  See more:

On 22 March 1936, big changes took place in the Katzenjammer universe. The same week as top strip Dinglehoofer lost his beloved dog, Adolph, which we looked at last year:

On that day, an old friend of Cap’s dropped in, his beautiful little blonde niece in tow, followed by a tall prunish woman who was the girl’s governess. The girl’s name was Lena, the woman, Miss Twiddle. They’ve never left.

Lena (a name once given as Mrs. Katzenjammer’s) instantly set the boys apart, each trying to outdo the other to have Lena’s attention. This was novel and lasted several weeks, but you can’t permanently put the brothers on opposite sides, so Lena and Miss Twiddle became a side opposite them. Miss Twiddle became a live-in teacher for all the kids, so a ready-made confrontation was available for Hans and Fritz’s wrath. Lena became a free agent, she could side with the boys for a kids-versus-adults theme, or with Miss Twiddle for a girls-against-the-boys plot.

She started out as a dazzling love object to motivate the boys against each other, but this got in the way of the more practical “conflict” storyline that was more suitable for Katzie stories. Knerr’s solution: Lena lost her beauty, and had the plainer features we know her with. It only took two months.  In the 31 May episode, she suddenly has changed. It would seem that the rough-and-tumble capers to come are more acceptable from a less distracting young lady. 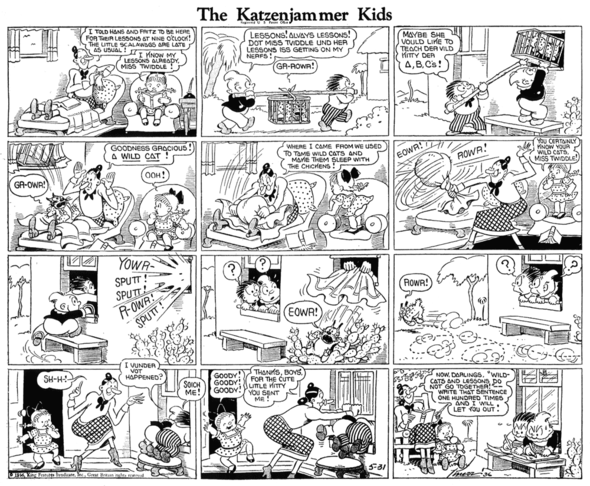 Katzenjammer Kids: The changing face of Lena, 31 May 1936
The cast was increased again before the year was out,  with another of Miss Twiddle’s pupils, one Rollo Rhubarb. He seemed to be modeled after English child star Freddie Bartholmew. Rollo had curly hair and an Eton collar like Freddie. If you don’t recall the lad, he had a cultured British accent and played prissy little gentleman roles.  Rollo was the apple of Miss Twiddle’s eye, a splendid student with impeccable manners. In contrast to the nearly feral Hans and Fritz, he was the living example of a GOOD boy. A natural resentment was born.  At first, our twin terrors were frustrated at every turn, with Rollo outsmarting them at every turn. Every prank they set up, “der Rollo” anticipated and exposed to the grown-ups. The grudge just got deeper every week. 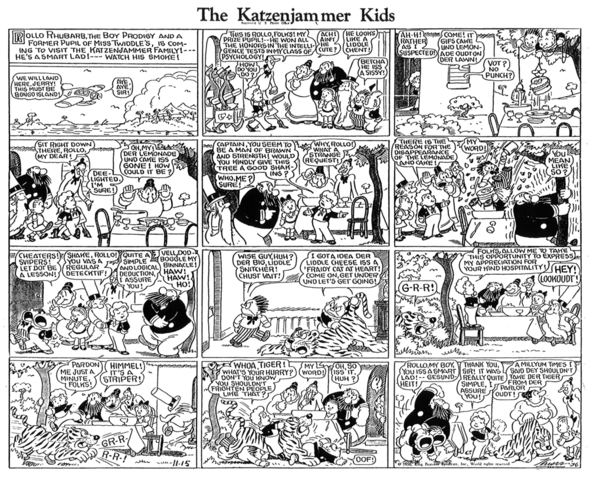 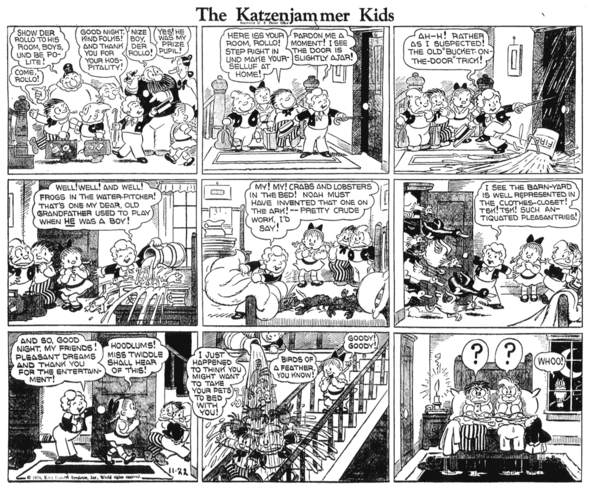 But Rollo was most expert at fooling the adults into thinking he was the manly little do-gooder, because he’s soon revealed to readers as a conniving hypocrite, setting up traps just to expose them as Hans and Fritz projects. He finally got his comeuppance about two months later and the three of them have been trying to outwit (or kill) each other ever since. 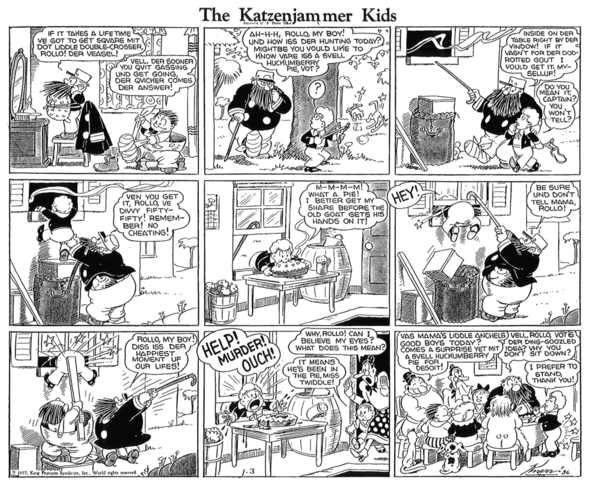 KATZENJAMMER KIDS: The first time Hans and Fritz get back at Rollo on 3 January 1937

And now, on to the Mail Bag

As for the demise of Mr. Ryan, it’s too bad. He was a great cartoonist in the old style action strip mold. He was a fixture at Marvel and DC comic books for years before he took over The Phantom.

There’s a moment of recognition of something from your past returning that’s hard to describe, I suppose it’s what the word “Nostalgia” literally, clinically describes. After a distance of many decades,  seeing things once common, especially from childhood, now long forgotten, can induce the feelings you expressed about Winky and his family. Defunct newspapers and magazines, long-ago trade marks,  TV commercials and toys can do it, too. Even old cereal boxes will.