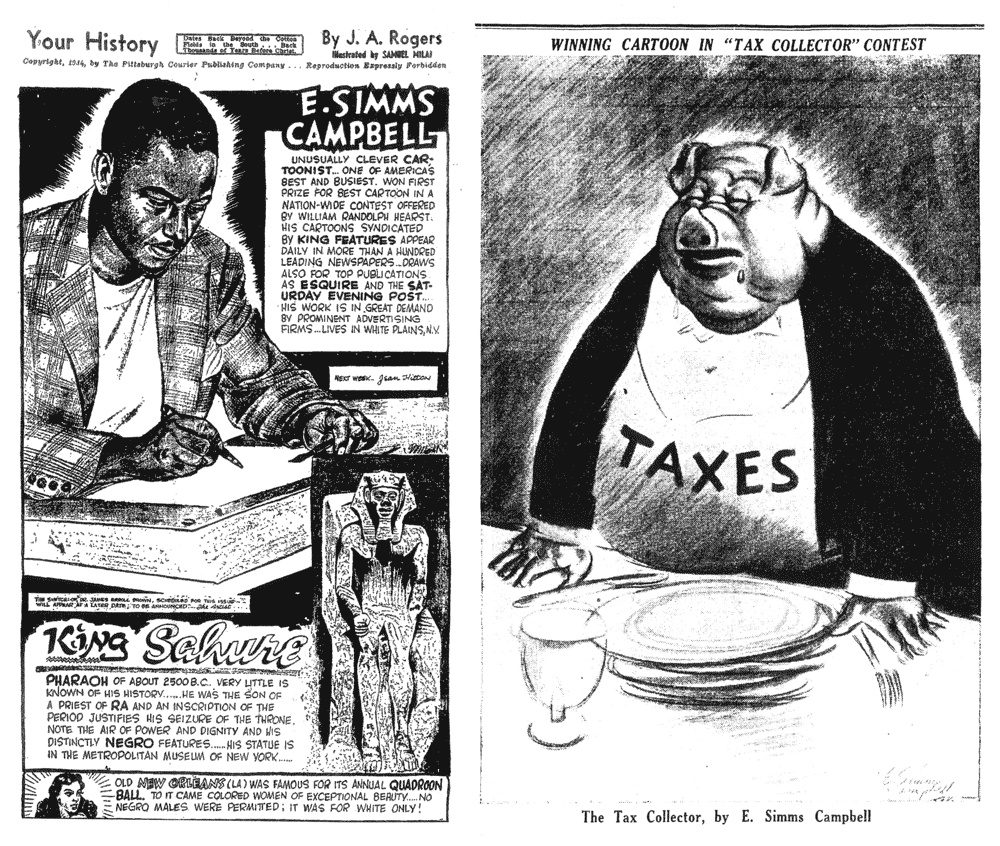 Today we look at the work of E. Simms Campbell, the foremost black cartoonist of the New Deal to the postwar era.

Campbell (1906-71) had a long and varied career, which took him from studies at the prestigious Chicago Art Institute to the top of the illustrating game.

Early on he’d been a commercial artist at an advertising agency in his native St. Louis. His friends, Ed Graham and C. D. Russell, introduced him to serious magazine cartooning. In those days nearly every publication would take gag spots, as well as all-cartoon mags like Judge, Life and Ballyhoo, which readily picked up Campbell’s efforts. He moved to New York to be closer to the editorial offices of these publishers. 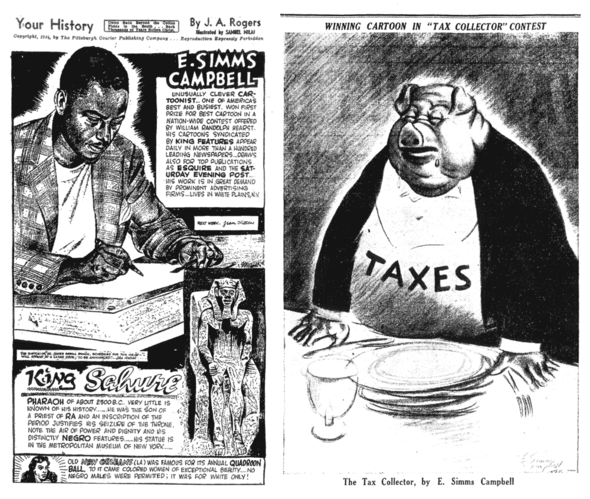 He had a proficiency for art contests. In St. Louis, he’d won one at the Post-Dispatch for the tenth anniversary of Armistice Day. He competed for others, the most significant being a Hearst newspaper challenge for the best depiction of “The Tax-grabbing Propensities of Today.”  Campbell chose a bloated pig in a dinner jacket drooling for more, and it beat out hundreds of other entries from around the country, winning him the $1000 prize and huge name recognition. The cartoon might be a bit tame today, but nobody can say the idea isn’t still eloquent. He would occasionally sell more editorial cartoons to King Features.

Soon he was most often seen in the more sophisticated magazines like Esquire and The New Yorker, with what were considered semi-risque cartoons, often involving sultans and their harems. He did color covers as well as regular panels for them.

He was quite a prolific artist, able to turn out quality material in a hurry --  exactly the sort of capability needed for newspaper cartooning. He did work for the ethnic newspaper, The Pittsburg Courier; a gag panel called Harlem Sketches lasted several years there. He also tried his hand at an all-black adventure-continuity called The Phantom Isle. But his biggest job, what he’s remembered most for today, is Cuties, a King Features series beginning in 1940. Apparently doing cartoons about white girls didn’t pose a big problem for him or the feature.  I think his black characters, that would appear exclusively in Black newspapers, would today be regarded as offensive, and he even had them speaking in stereotypical dialect. So, standards change. 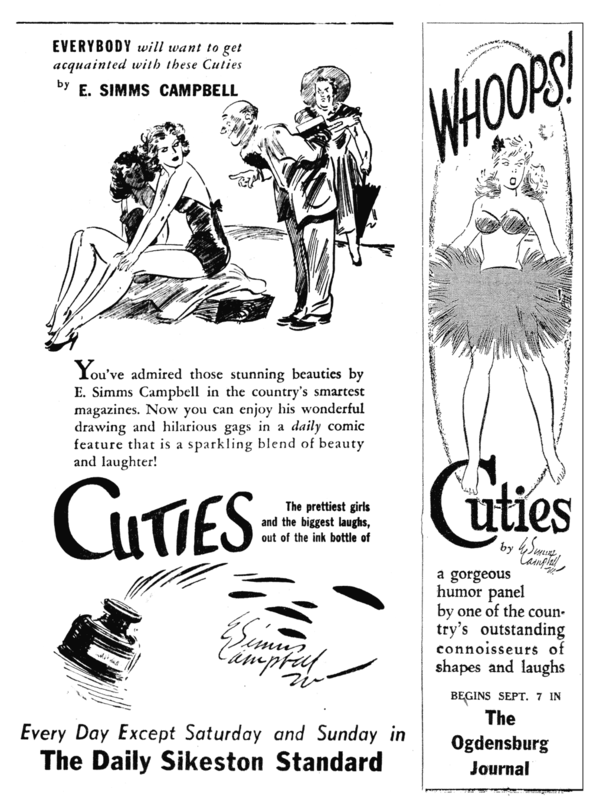 King already had  daily gag panels like Laff-a-Day, but Cuties was sold on the reputation of its artist. It  was more or less a pretty standard girl gag panel, in fact some papers opted to call it “Girligraphs” (like the Minneapolis Tribune or the Utica Observer-Dispatch). Why it should have two names, I can’t guess.

Campbell’s bread-and-butter themes were the usual ones for this genre, lots of showgirls gossiping in the dressing room, secretaries in the boss’s lap, the marriage proposal, etc.

Pretty much like Don Flowers and his similar series that we examined here:

I always thought Campbell had some shortcomings. For instance, his characters were always stiff, and he could never represent movement very well. He also repeated gags a lot, for instance, the gal on the witness stand that shot somebody seems a real favorite. Nevertheless, his panel lasted thirty years until his death in early 1971.