Ask a Cartoonist: A Friend Indeed!

Where would we be without our friends?

This week, I asked our cartoonists to share stories and a tip of the hat to friends who have inspired and/or supported them through their cartooning careers, or their favorite friendships in their comics.

My submission is of a family member who supported me in my love of comics.

You end up using a lot of friends and family as reference when drawing. The elderly couple in the accompanying panels are my Uncle Whit and Aunt Pat (they have since both passed away). They're from a Flash Gordon Sunday page (10/31/1999) where Ming’s attempts to conquer the Earth by means of a gigantic space portal linking Earth to Mongo have just failed.

This page was an homage to them. They faithfully picked up the Boston Herald each Sunday which ran Flash Gordon (even though they subscribed to the Globe) to see their nephew’s work. An artist herself, two of my Aunt Pat's pieces of sculpture were chosen for juried exhibition at the Walker Art Center in Minneapolis, Minnesota. My Uncle Whit was a poet and educator. 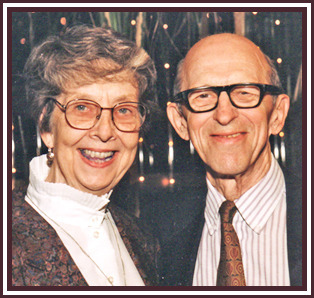 My Aunt Pat’s support of my comics/art career went farther back than this though. When I was a kid and my local Minneapolis paper stopped running the Spider-Man newspaper strip (which I had been diligently clipping out every day) she clipped them from her Boston paper and sent them every week for the next two years. She didn't differentiate between "high art" and the "low art" in regards to comics - she just kept faithfully sending them to me so I wouldn't miss out on any of the John Romita art I loved so much.

They don’t get any better than that.

"Safe Havens" features a group of friends who met as preschoolers in 1988. The strip has followed their lives as they've progressed into their late twenties, as they are now getting ready to embark on a voyage to Mars.

I based most of my characters on real people so that I could create friends for my readers. As an example, I based Beetle on my old High School buddy David Hornaday. Everyone liked David. He was tall, good-looking and a good-natured goof-up. One day I drove by to pick him up to play in a golf tournament. His mother said he was still in bed and to go and wake him up. I went to his room and shook him and yelled, "Dave! Wake up! We have a tee time in 30 minutes!" He just rolled over with his back to me, embraced his pillow and went on sleeping. I lifted his cot and dumped him on the floor. He grabbed his pillow and never woke up. I groaned at him, "David you should be in a comic strip."

He's been my cartoon star ever since. He lived in a small town in Missouri and they found lots of funny reasons to use him to jazz up goofy stories on their front page. He always seemed to enjoy his infamy.

Snuffy and Lukey have been lifelong friends! It seems like they have been friends for as long as they can remember. Heck, Snuffy even knew Lukey when he was young and beardless...or was he?!

I have a few really important friends who have supported me through the ups and downs of my life. Because I’ve moved around a lot, I don’t see them as much as I’d like, but whenever we meet up, we pick up where we left off.

On the subject of friends, I’m working on a middle grade book called Friends Against Bullies (FAB) Club. Right now, it is in the rough illustration stage and you can follow my progress on my blog.

Here is a blast from the past from a group of friends back in college.

My character Amy (the older Kaplan daughter) was named after my best friend growing up. We’re still very close, even though we live two states apart. She shares my sense of humor and outlook on life, and I love honoring her by naming a character after her. She also happens to share the character’s brunette, curly hair. Well, she did when she was younger, anyway. Amy (the person) has always been a great support in my life, and I love her like a sister.

This goofy photo was taken when I spent a few days with her family at the beach in 1989, I think.

And this recent photo was taken in the fall at my daughter’s Bat Mitzvah. We’re talking 40-some years of friendship.

Here’s a ‘friend-focused’ Classic Ketcham that’s gone to the dogs. 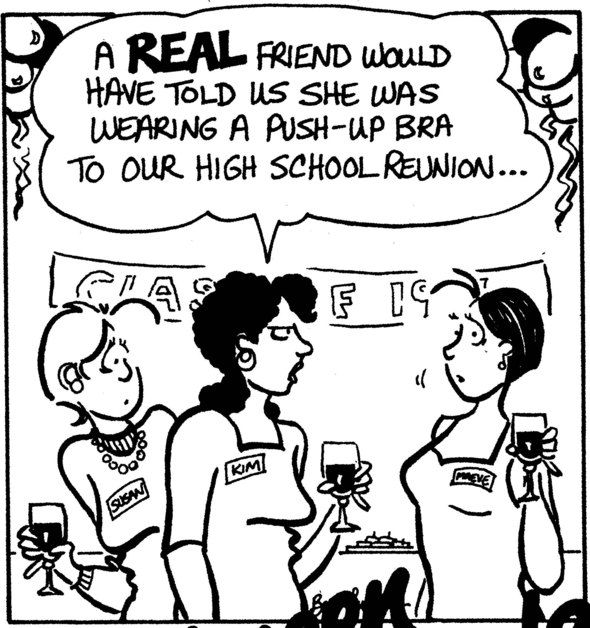 This is a Between Friends cartoon that was used as a marketing tool when my strip was launched in 1994. The gag originated from a photo of one of my friends and her sister at my friend's wedding. The punchline is tweaked from "...why didn't you tell me you were wearing a push-up bra?..." to "...A real friend would have told us..." They got a kick out of the cartoon when they saw it.