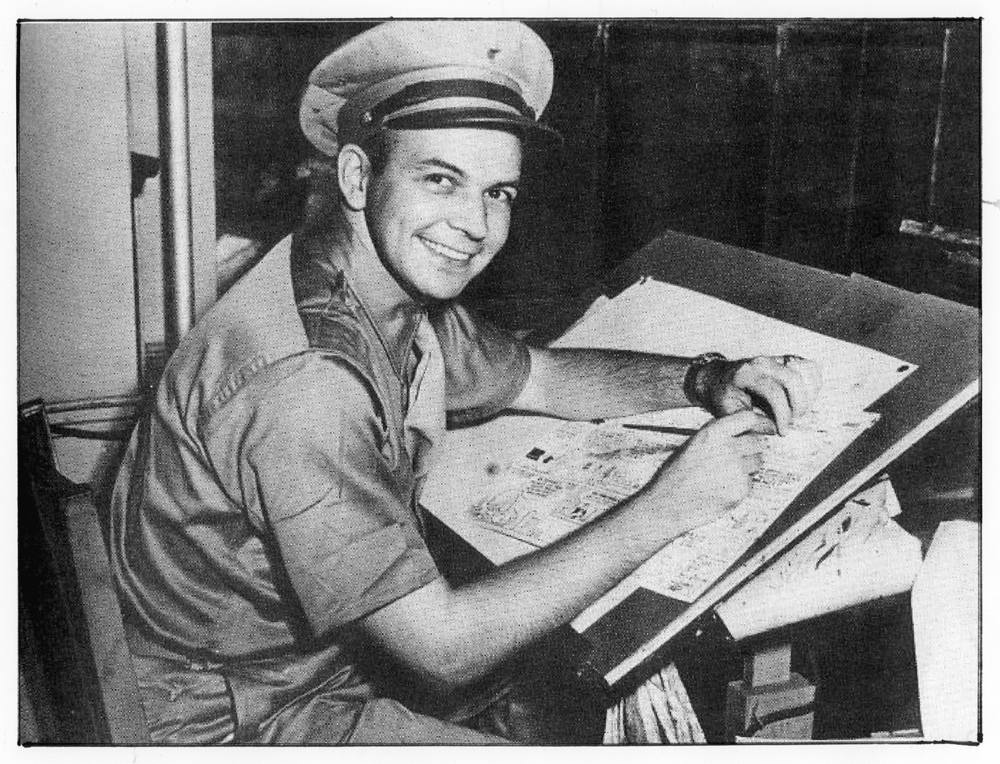 An anniversary I missed earlier this year I duly acknowledge today, getting it in before the year ends: it’s been a century since Fred Lasswell was born, and fifteen years since he left us and John Rose took over the helm for Barney Google and Snuffy Smith.

I present here a hodgepodge of Snuffy-related items I have pulled from my file of such things I’ve gathered over the years. 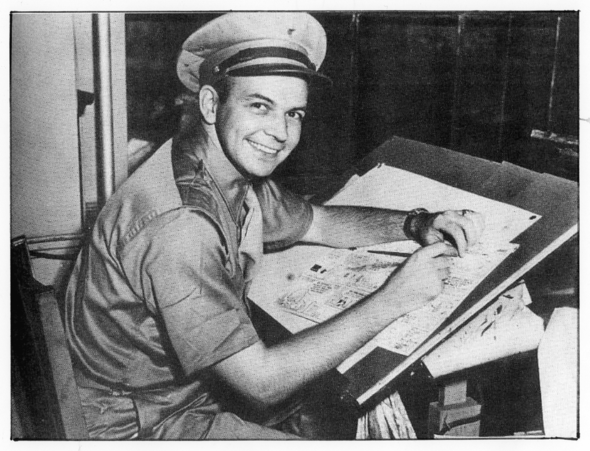 Fred Lasswell was assistant and ghost for Billy DeBeck starting in the 1930s. By the time World War Two was in full swing, Barney, Snuffy and Lasswell had joined Uncle Sam’s fighting forces, Barney in the Navy, and, like Snuffy, Fred went to the Army. Unfortunately, It was at the same time DeBeck’s health was starting to fail, so in the service or not, Lasswell was taking up more of the cartooning duties through the last months of DeBeck’s life. He died in November 1942, though we see Lasswell working on the 23 August 1942 page. There must have been a backlog because he doesn’t actually put his name on the strips until early 1943. The Army stint eventually got the best of Lasswell, and he had to hand over the reins to
comic book bull pen man Joe Musial for most of the rest of the war in 1944-45.

Snuffy Smith promos: 1.) A 1940 specimen by DeBeck still includes Barney front and center. 2.) & 3.) Two 1950s versions by Lasswell with Sut included, with Barney just among the tiny figures in the background.
4.) More Lasswell art, this from the 1960s, with Barney now absent. 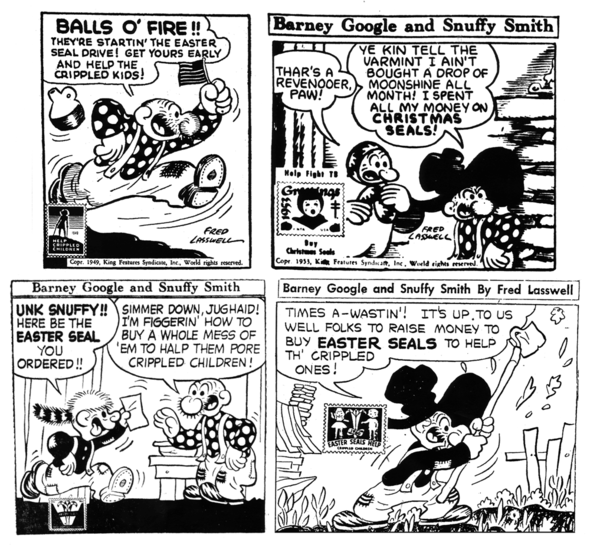 Snuffy took time out from card playing and moonshining long enough to show some Christian charity with PSAs for Easter and Christmas seals: 1.) 1949 Easter Seals, 2.) 1953 Christmas Seals, 3.) 1958 Easter Seals. (This one shows either a rare typo or ol’ Snuff was dang stingy that yair.) 4.) 1960 Easter seals.
All of these images were no doubt culled with little regard as to what was going on in them,
from a stock of art the syndicate had on hand, and a semi coherent message was added. 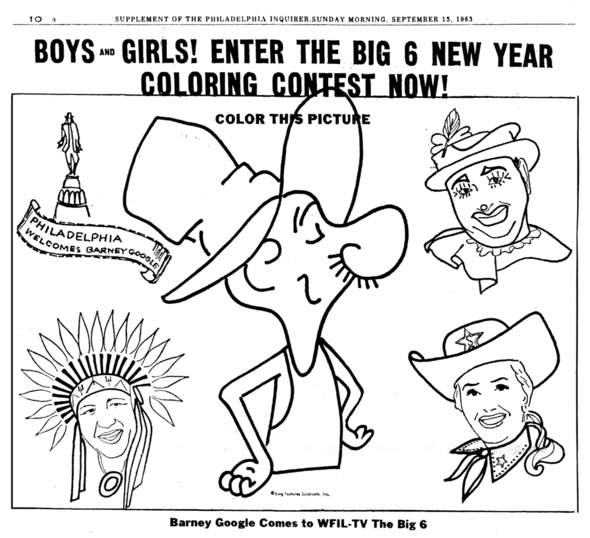 When the Barney-Snuffy TV cartoons hit the airwaves in the fall of 1963, the local ABC affiliate in Philadelphia ran a coloring contest that included some faces of that long ago breed of video personalities, the local kiddie show host/hostess. The picture of Snuffy is taken from Snuffy Runs The Gamut (1963), showing him in his track suit. The copywriter got confused as to which character this might be.
The images surrounding Snuffy are, running clockwise: a quickly sketched William Penn statue
that stands atop Philadelphia City Hall, a local landmark and among the most
amazingly weird public buildings of the nineteenth century.
Next, “Happy The Clown.” Hap had a tiny circus-motif set complete with some backyard playground equipment and a golf cart referred to as “Chippy The Chipmonk.” He gave tiny circular rides to his audience of toddlers. He wasn’t well named, he always seemed like he hated being there. All these shows were live. A favorite moment was when he blurted out to some errant kids, “Get the HELL off that slide!!”
Sally Starr, “Our Gal Sal,” somehow aspired to be a cowgirl, and even rode horses. She was the proprietress of a ranch that was only a murky flat with a make-believe length of stockade fence. She showed the Three Stooges and the King Features TV Popeye cartoons, too. She was a longtime fixture at WFIL (now WPVI), channel 6 for many years. Old Philly viewers will fondly recall her signature tune, a bouncy, jingly version of the “Wagon Train” theme that opened “Popeye Theatre.”
And last, is the visage of one Chief Halftown, a real Seneca Indian.
His name was actually Traynor Ora Halftown, though his actual chief status might be in doubt.
He had many different formats, from presiding over puppets and cartoons to his
best-remembered and very long-running series giving local amateur kids a tryout. 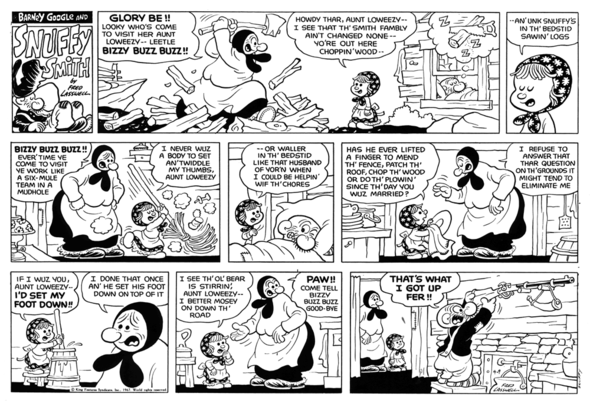 Beating the odds, I’ve found yet another appearance of Bizzy Buzz Buzz, 9 April 1966.
This has to be the final time Lasswell bothered with her.

Fred makes a special live appearance in 1979 to help open a bank in Athens, Alabama.
Nice to have that kind of fame, I guess. 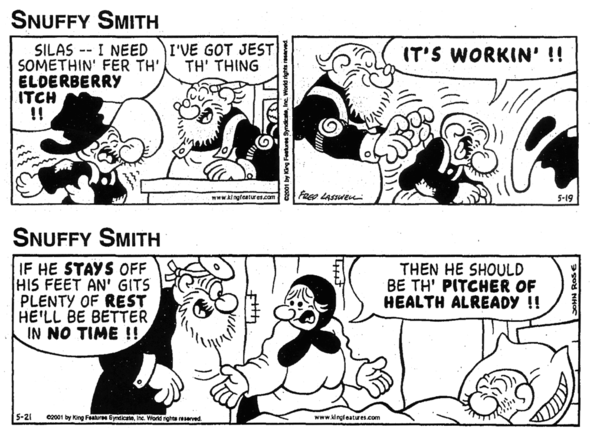 Two months after his demise, the last strip to bear Fred Lasswell’s signature on Saturday, 19 May 2001,
and the following Monday’s entry, the first to be signed by current pen pusher John Rose. (21 May 2001).
I imagine Rose had actually been doing for some time, just as Lasswell had during DeBeck’s final weeks.