by Steve Kelley and Jeff Parker
This past weekend I made a pilgrimage to Columbus, Ohio to pay homage to The Most Interesting (And Popular) Cartoonist In The World -- the great Mike Peters. A few dozen other cartoonists, as well as another hundred or more fans, helped celebrate the opening of 'What A Hoot -- A Mike Peters Retrospective' a new exhibition at The Billy Ireland Cartoon Library and Museum at The Ohio State University. Things got underway before the afternoon events with an exclusive tour of a tiny portion of 'The Billy's' unparalleled collection of more than 300,000 original cartoons, 45,000 books, 67,000 comic books, and 2.5 million comic strip clippings and tear sheets. Afterward, Mike led a curator's tour of the exhibition of nearly 50 years worth of his work. Then there was an out of control 'chalk-talk' by Mike, followed by a signing session and reception. Plus, the National Cartoonists Society's Great Lakes Chapter threw a swanky dinner party for all the visiting cartoonists and guests just around the corner at Ohio State's brand new Student Union. The 'What A Hoot' exhibition runs through March 12, 2017. If you're within 200 miles of Columbus, it's well worth a short trip to see. Here's a short video of what you'll view there, courtesy of the BICL&M... https://www.facebook.com/TheBillyIrelandCartoonLibraryAndMuseum/videos/1163922006977091/?hc_ref=SEARCH

What a Hoot! A Mike Peters Retrospective examines the life and work of the Pulitzer Prize-winning editorial cartoonist and creator of the King Features comic strip Mother Goose and Grimm. Between his popular strip’s host of hilarious animals and a body of editorial cartoons spanning nine presidencies, visitors will learn about Peters’ world-view as well as his fervent sense of humor.
Peters’ early work will also be featured, from his time as a student and in the Army. This retrospective celebrates the energy, intelligence, and laugh-out-loud humor that have characterized Mike Peters’ work for nearly 50 years.
Curated by Professor Emerita Lucy Shelton Caswell, with Peters’ donations and loans to The Billy Ireland Cartoon Library & Museum. Co-sponsored by King Features Syndicate. 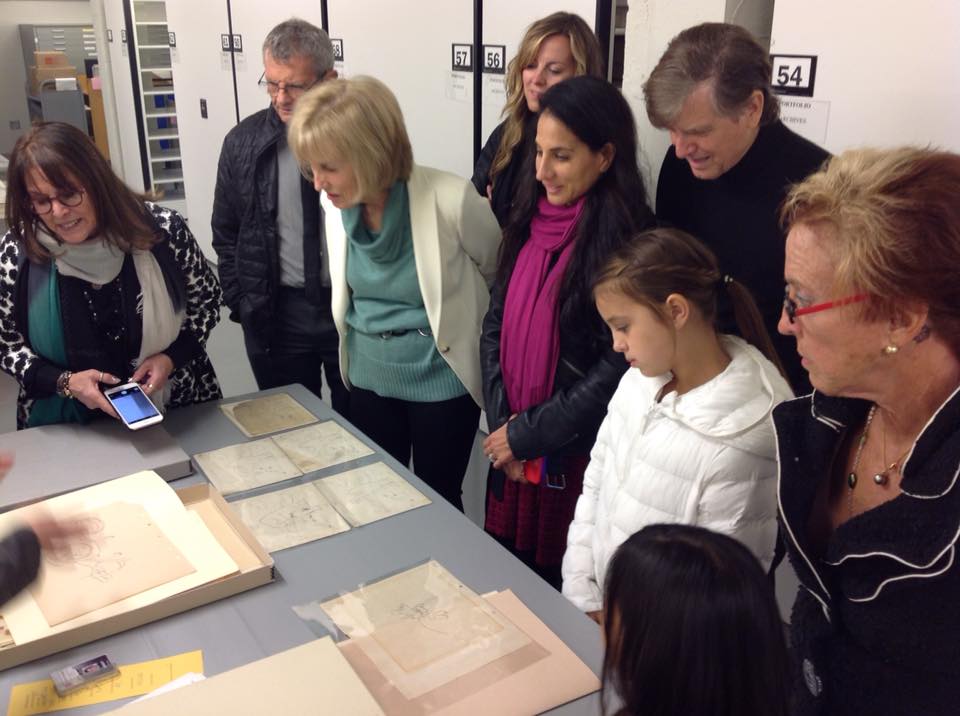 Mike (in black turtleneck), along with a few family and friends, got a special tour of The Billy's super-secure archives and vault... Guarded by sharks with frickin' lasers. (I asked a lot of dumb questions about silverfish, which the archives 'nuke' before new acquisitions are added to the collection.) 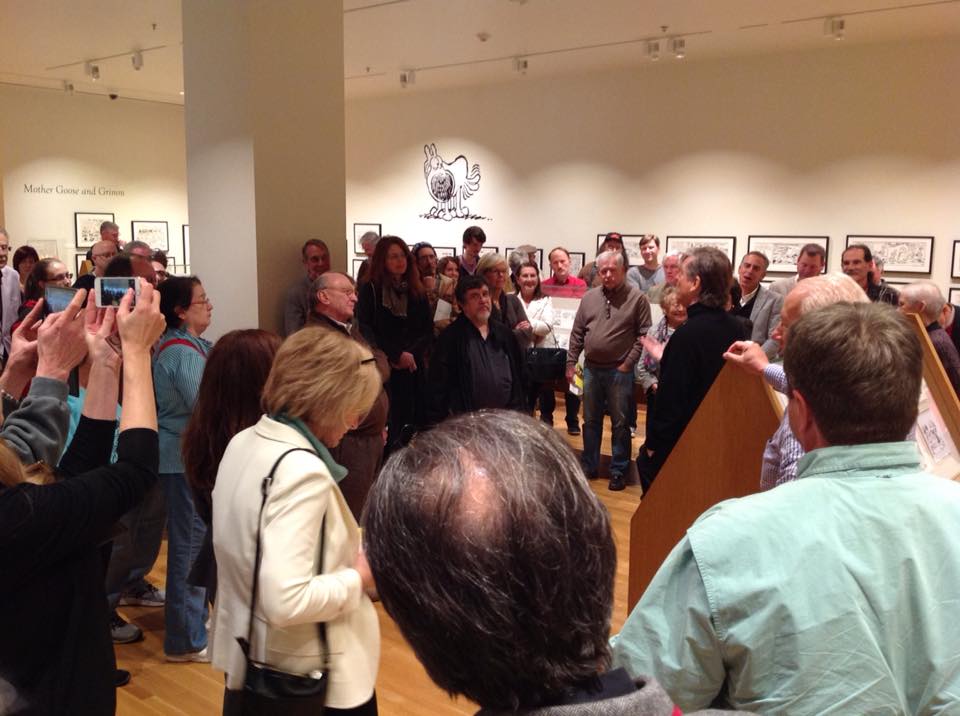 Mike (in black), spinning yarns of his first days as an editorial cartoonist during the curator's tour of his work. "I'll keep this short."

The Mike and Mike Show. Two-time Pulitzer winning editorial cartoonist Mike Luckovich was there to tell a couple of stories about what being friends with Mike Peters is really like, which soon evolved (or devolved) into the two of them interrupting, correcting, and finishing each others' stories... In comedy parlance, they killed.

Grimmy himself made an appearance! (photo courtesy of Caitlin McGurk, BICL&M)