I drop you a line once more in our look at the cross between comics and post cards that was a national obsession a hundred and ten years ago.

The Hearst newspapers had free cut-out cards offered in the years 1906 and 1907 that came with the Sunday editions, so it’s worthy of a look.

This has happened twice before:

There are sometimes seen characters from other syndicates, the white-hot intensity of the fad would guarantee it, but the several Hearst series were everywhere. Free advertising paid off.  The probably-unintended nature of post cards is they became keepsakes and collectibles. Now most of them are still here, so many years after the senders and recipients aren’t.

These have no special order, I’ll just roll them out and let you gorp at them. 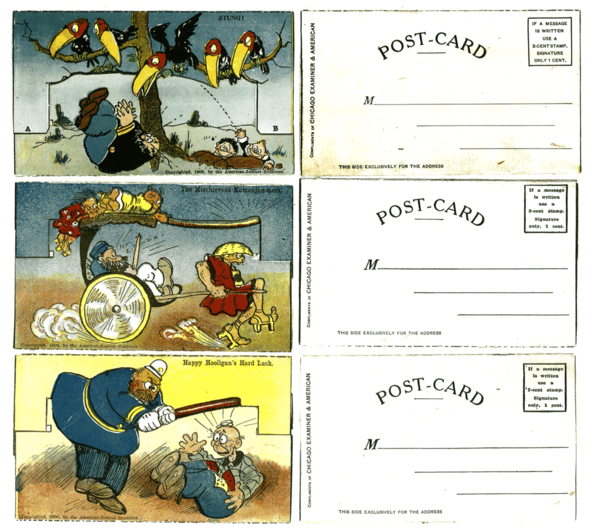 Three more of the “Mechanical” fold-ups like we looked at before. Top: Der Captain is apparently suffering an attack by red-headed toucan birds and a rocky fusillade by Hans and Fritz at the same time. Middle: Here we see Cap trying to enjoy his Japanese holiday, but the boys will have none of it. These cards are usually hard to date precisely, but the Katzenjammers were visiting Japan in September, 1906, hence, they wear Kimonos. The object in Cap’s hand is a sideways view of a fan, not a knife blade. Bottom: Happy Hooligan’s much abused skull takes yet another round of cop clubbing in a rather uninspired card.

A particularly ambitious series was this mechanical series of 1906. When I use the term “mechanical,” it refers to the card moving somehow. The ones shown at the top were simple to cut out and fold, the movement would be from squeezing it so the top part would come down on the bottom, creating the tiny bit of action. But here is a set of far more involved construction, where one would cut out the eyes, mouths and slots on the image, and intricate jigsaw puzzle-like pieces cut from another card that would be inserted through the first, and held in place with a pin. There’s one still in the Katzenjammer card.
If it was okay for a kid to get involved with a hot iron or open flame to get the most out of a card in the heat-sensitive series, why should a pin worry anyone? I’m sure the hearty mailmen of that time were just delighted to have unexpected sharp objects protruding from the items in their mailbag.
You’ll also note it’s an especially horrible series to look at. The artwork was usually done by the cartoonists themselves, but this time they found exceptionally unskilled hacks to have a try. The incompetent misunderstanding of proportion and anatomical construction seems to be a general design flaw in their concept. Buster and the Captain’s arms have been replaced by hands emerging from shoulders. Somebody went to all the effort to assemble them. Maybe this was a special Halloween set.
Maybe it was secretly put out by one of our competitors. 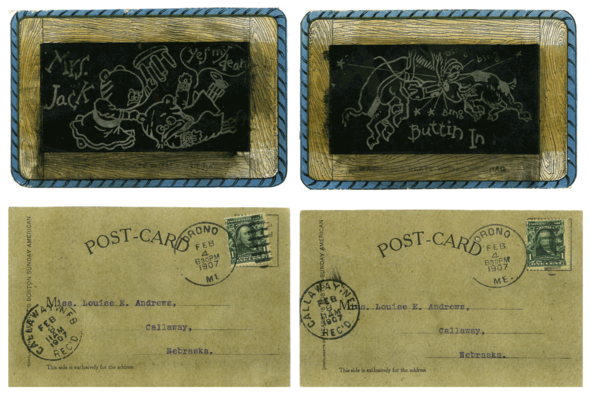 Here’s a couple more in the Magic Slate series, probably not drawn by the creators of the characters shown, but at least by skilled ghosts. The first shows Swinnerton’s Mr. Jack being disciplined
by his bitter half, and Opper’s Maud the Mule comes to loggerheads with a rammy goat.
Violent head impacts are always funny.
The “magic” of the Magic Slate was less than otherworldly; it was actually a thin layer of dehydrated vegetable dye printed over the image. The user, no doubt trembling with anticipation as to what might be revealed, would wash it away. As they were part of the dye, barely legible, the instructions read “Wash this Slate With a Wet Rag,” which was the common practice then for cleaning an actual slate, standard grade school equipment then. I’ve never seen a card that exists unwashed. The ability to “print” these dyes was a new but short-lived fad in about 1902, when kids were invited to use a variety of them like watercolor paints by touching a wet brush on them, and applying it to a ready-to-color image also supplied on Sunday pages in such papers as The Boston Post and The Philadelphia Press, but Hearst’s papers waited a few years.

A 1907 series utilizing the water and dye had the junior Rembrandts using strips of color offered (cut out of the inside square, above) and applying it to the image. When finished the “Frame” folded down and was held in place by a small notch. Then it was ready for the mailbox or a make-believe Louvre wall.
This is a really rare series. 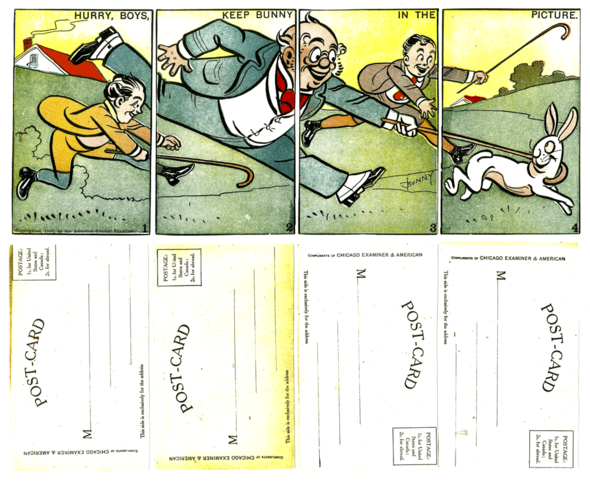 Foxy Grandpa and the boys chase creator “Bunny” Schultze’s signature cottontail across four separate cards in this clever set of 1907. Schultze was a genius for self-promotion, issuing lots of early licensing toys, games, films and even post cards. Pity the actual strip was so anemic. 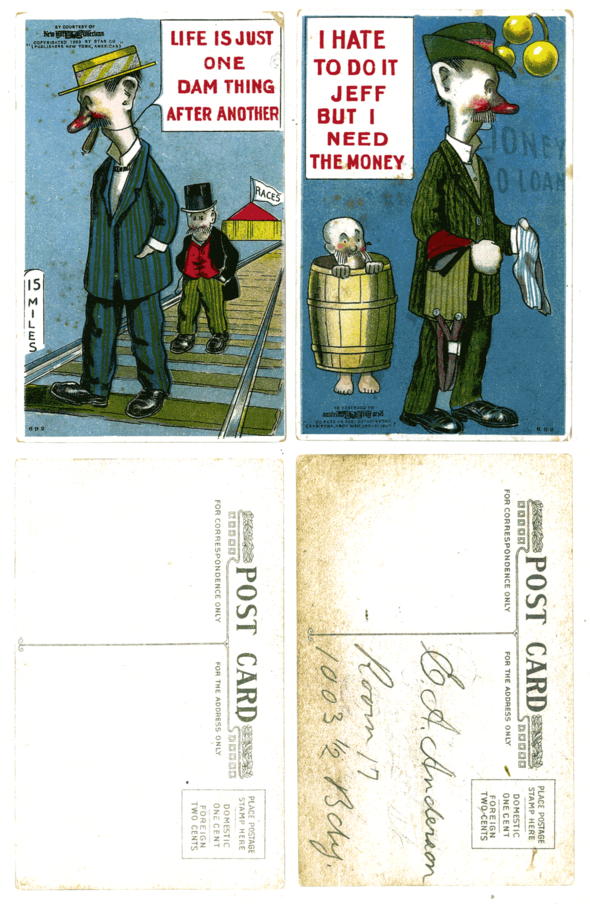 Mutt and Jeff were rapidly rising superstars of 1900s comicdom, and their author, Bud Fisher, knew a little about exploitation, too. In these two cards, not made by Hearst, Fisher has another, decidedly ill-matched cartoonist to do the gags, one that has covered them in painterly mood shadows and hasn’t got the full skinny on word balloons. Because Fisher was working under the aegis of William Randolph Hearst, the cards bear the logo of the parent Hearst paper and the corporate name: “By Courtesy of New York American Copyright 1909 by Star Co. (Publishers New York American)”
Notice, if you can, this whole blurb is printed mirror-image backward on the second card.
How did that happen?

The ratio of one gag to one continuity isn't really possible, as we have very few story strips left untouched. There have always been more comedies anyway.

Patches of characters are probably a more recent phenomenon than I would have encountered. When I was a lad, a patch on a garment would have to be sensible somehow. If I had a cartoon character patch, my mother sure wouldn't sew it on anything I might be seen in. I checked out patches on Google images just to see if I'm really missing something, and for the most part, they're all quite modern, showing various Disney, Hanna-Barbera and Japanese animation properties. For KFS items, there were some Betty Boops, but I didn't even see a Popeye. Oddly enough there was a Little King patch, obviously from that series' later years, about 1970, but there was no explanation of where that might be from or if it had some purpose.

Thanx, Mr. G.  As for news comics, our budget brand syndicate, Central Press, issued them a lot in the 1930s. I showed a few more of them here:

There were a lot of one-shot news comics in this type of format in the low-class tabloid papers in the 1920s, showing how the day's late-breaking murder took place, accompanied by ghastly melodramatic narration captions. In a way, they might be the primitive ancestors of crime comics, or even the graphic novel.