This weekend the New York Comic Con is taking place at the Javits Center in New York City from October 6 – 9!  Be there for all the comics, cartoonists, and costume fun!  If you plan to be there, stop by and see Bill Holbrook (“On the Fastrack”, “Safe Havens”, “Kevin and Kell”)!  He’ll be at the National Cartoonists Society’s booth (#2058) Friday, Oct. 7 from 4-7pm, and Sat Oct. 8 from 10am to 1 pm!  Check out his books while you’re there!

Bill Holbrook will be at the NY Comic Con!

Terri Libenson (“The Pajama Diaries”) once again tackles a hardcore reality issue with a series of strips dealing with women’s mid-life changes:  perimenopause and menopause!  Read her post HERE!

Terri Libenson spotlights perimenopause and menopause in "The Pajama Diaries"!

Jeff Parker (“Dustin”) shares a peek at an upcoming Halloween week strip!  It’s not a political strip, even though Dustin finds a Donald Trump mask!

John Rose ("Barney Google and Snuffy Smith") thanks The Roanoke Times for their article about cartoonists coming to Roanoke for the Southeast Chapter of the National Cartoonists Society annual Fall Meeting!  You can read about it HERE!

A piece of artwork drawn by three cartoonists to be auctioned off at Saturday's event!

Rina Piccolo ("Tina's Groove") will appear at two events in Germany to promote the German Edition of the book, "Quirky Quarks: A Cartoon Guide to the Fascinating Realm of Physics!"  One event is at the Frankfurt Book Fair on Sunday, October 23, 11:30am-12pm, and the other event is at the Wittwer Bookshop in Stuttgart on Wednesday, October 26, 6pm - 8pm!

Rina Piccolo ("Tina's Groove") will be promoting her new book in Germany! 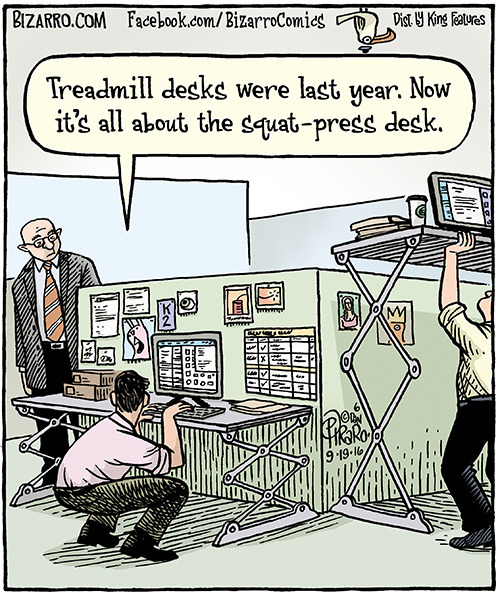 "Bizarro" is by Dan Piraro!