Ask the Archivist: RIGHT AROUND HOME WITH MYRTLE 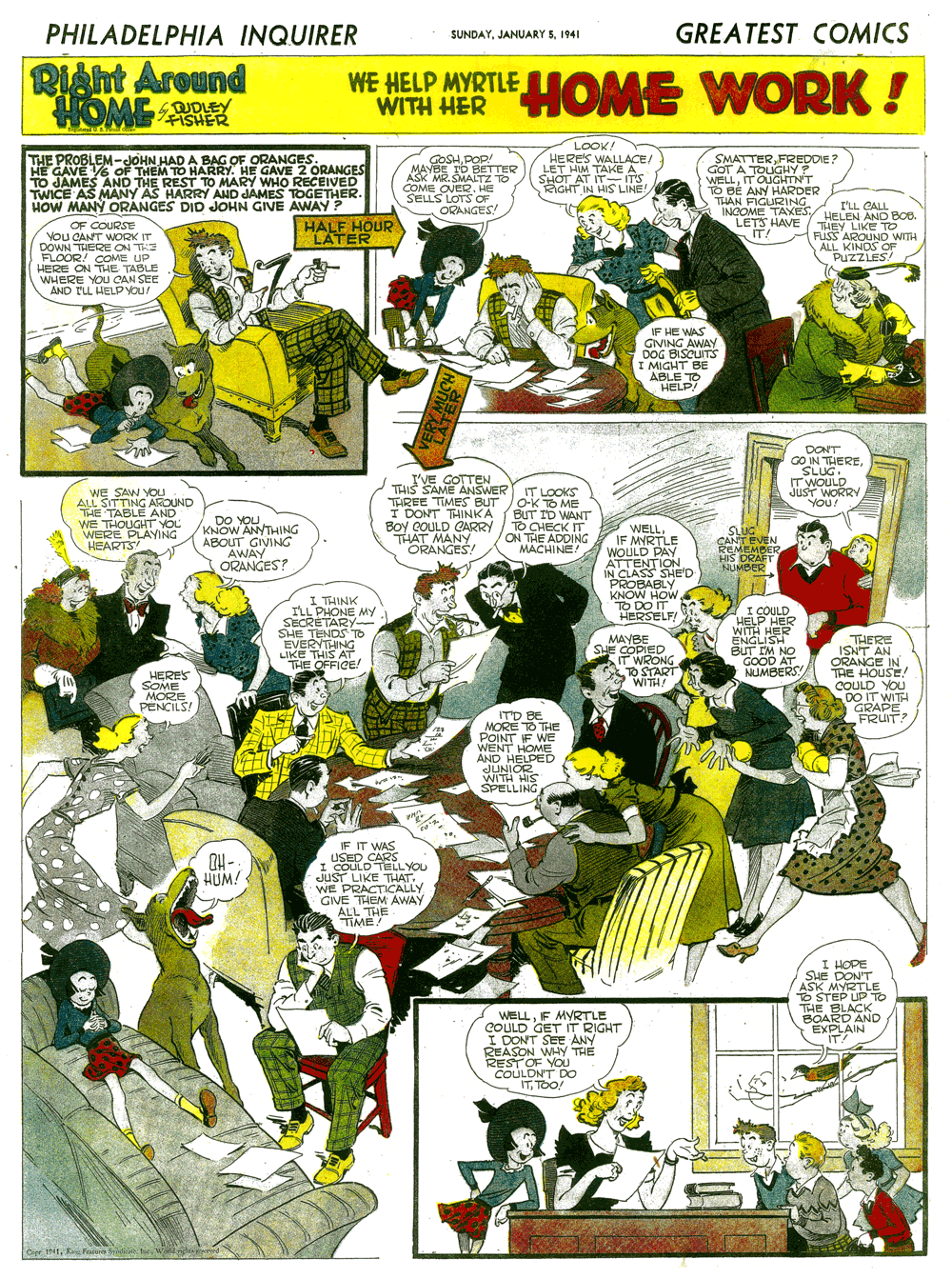 A few weeks ago, reader Peter H. Vollman wanted to see something of childhood favorite Myrtle. Your wish is my command, albeit a month later.

Myrtle, or rather, Right around Home, began in 1938 as a Sunday-only feature with a daily added in 1941. The artist, Dudley Fisher, was a longtime artist for the Columbus Dispatch. He had a gift for drawing highly detailed, crowded scenes reminiscent of the nineteenth century masters like Thomas Nast or Richard Outcault.

Fisher’s strip was a family sitcom, starring a suburban little girl named Myrtle, her parents, pets and friends.   The daily ran pretty much like an ordinary kid strip, at a good setup and payoff tempo, usually about Myrtle making humorous overstatements or misunderstandings, and the mischief she and her friend Samson could get into. Her father is often the brunt of jokes because he acts childishly, but then again so does her mother and the rest of the adults.

The Sunday had a different, even strange pace. The least little thing – a special delivery package, borrowing an egg, buying an overcoat, raking the lawn, et cetra – turns into a community project where everyone participates or watches. Though many comics have funny neighbors as characters, the Sunday Right around Home, usually one large panel with maybe an insert or two, had them all crammed into the scene, somewhere, with nearly everyone commenting. Even birds and animals added their two cents. It’s all a bit claustrophobic. 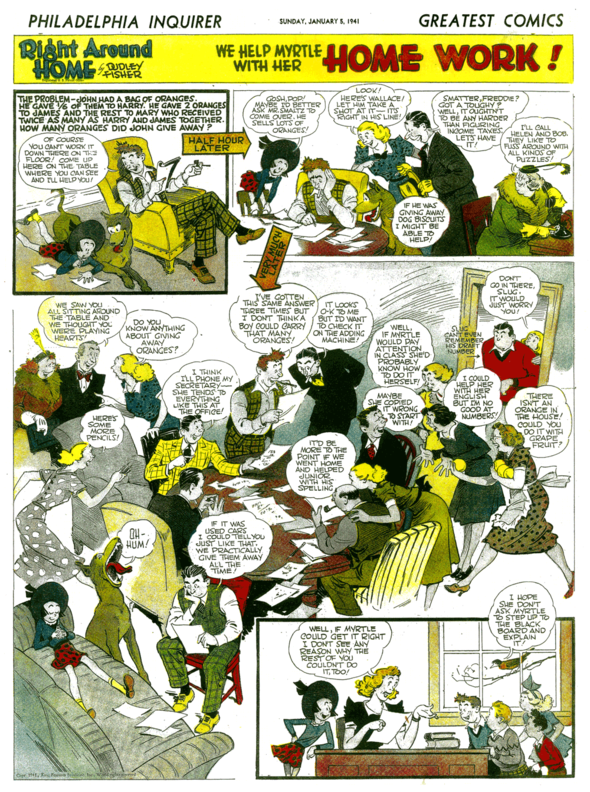 RIGHT AROUND HOME: The 5 January 1941 page finds the manic-obsessive child-adults fixated on Myrtle’s school work. For many years, the feature was available in
full- and reconfigured half-page format at the same time. 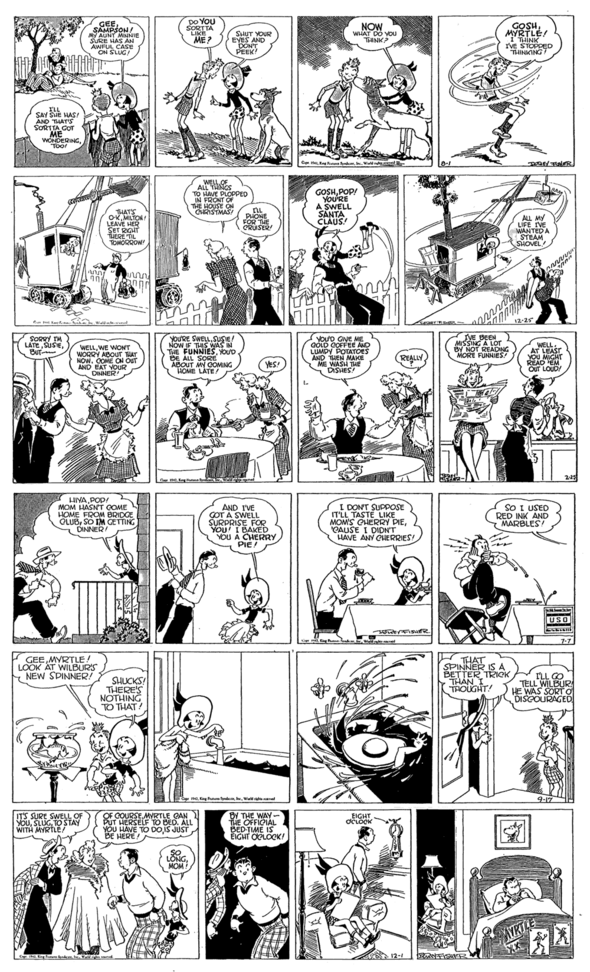 RIGHT AROUND HOME: Some dailies of 1941-42 showing Myrtle’s parents,
her dog Bingo, her Fish Wilbur, Uncle Slug and her best friend, Samson.
He had an off-and-on stuttering problem, which eventually became a lisp.

RIGHT AROUND HOME: 18 October 1942. An interesting cutaway house format.
Fisher’s favorite scene for Myrtle’s adventures was the front or back yard. 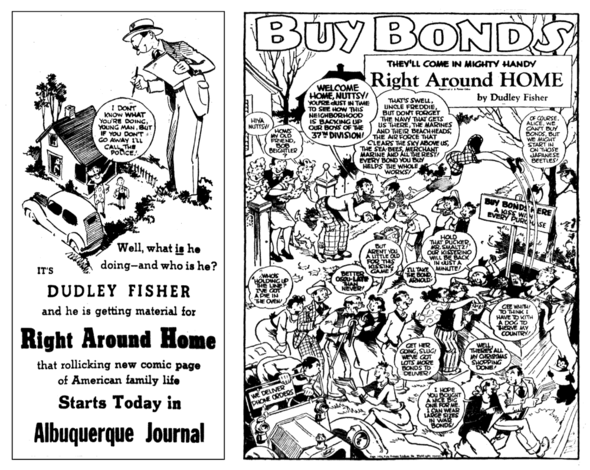 RIGHT AROUND HOME: A 1939 Promo with an unusual self-portrait of cartoonist Dudley Fisher,
and a 1944 PSA for War Bonds. Would you get patriotic and buy more if Myrtle asked you?

RIGHT AROUND HOME: 20 June and 11 July 1943.The wild, childlike enthusiasm makes the adults seem at the same level as the kids. And something odd about Fisher’s characters: more often than not, regardless of how bad the situation, they always smile. 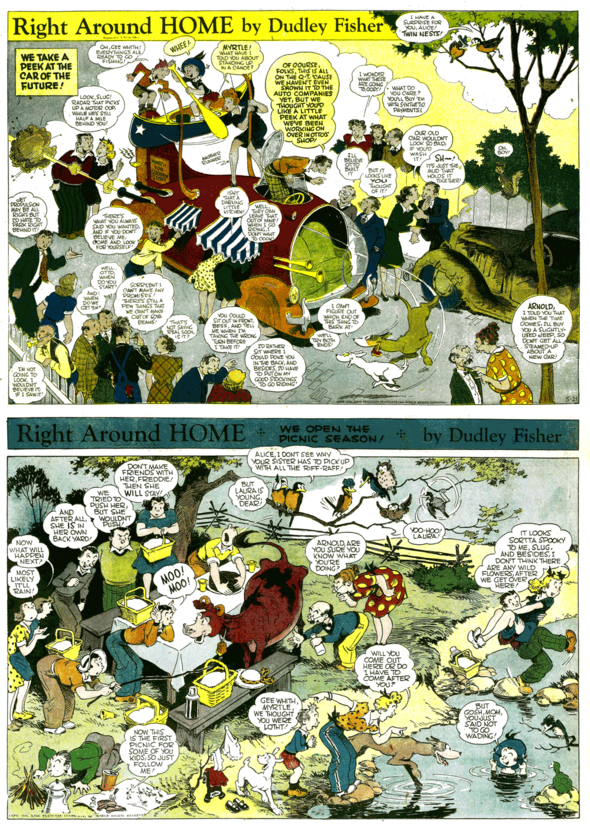 RIGHT AROUND HOME: 21 May 1944 and 10 June 1945. World War Two produced a lot of innovations in medicine, weapons and electronic technology. We were all sure of many marvelous
“Postwar Inventions” to come. A fantastic new breed of autos were going to
become reality. We figured there might be a time when everyone would have
their own Television receiver and a Helicopter, too. I’m still waiting for my chopper. 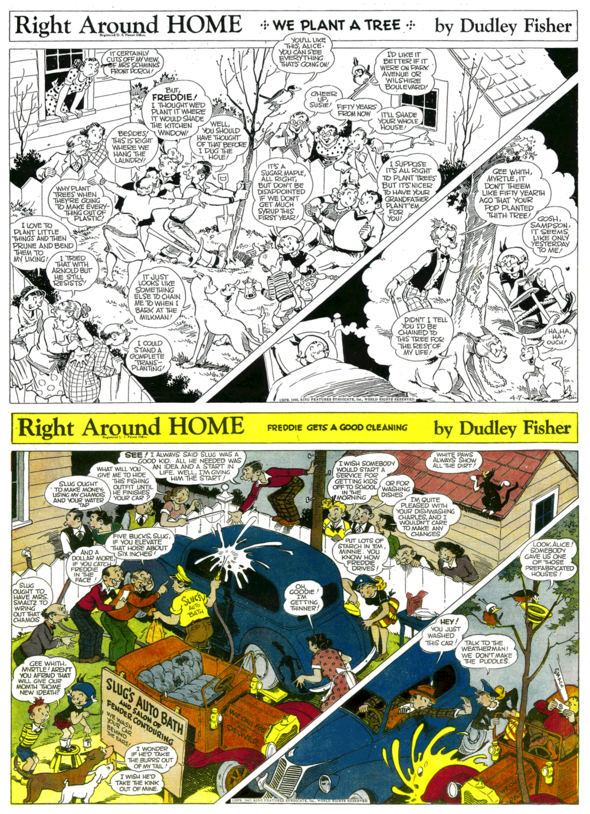 And now, on to our Mail Bag

Thanks for the end date of the Herex’s Puck section. I remember when they departed on 2 November 1989,  and  somewhere I saved the last issue. They concluded that Angelinos just didn’t read anymore, at least not enough to sustain two papers, and the Times outsold them every day.

Until it can be locked down, it will just be safe to say the final use of the Puck logo is “Circa 1980.”

Your explanation of the Syracuse Herald American is correct. The Hearst Corporation had only a partial interest by 1957, thus the odd configuration seen in the section presented last week. Into the 1940s, we published the Sunday Syracuse American, which had the Puck section, but when the Syracuse Herald was combined with it, the pure, if that’s the appropriate word, Hearst content ended. So although the KFS material was available to them, there were other syndicates to pick from. Their weird re-arranging of the “Comic Weekly” logo is something I’ve never seen done elsewhere.

The Hearst Washington papers -- the Times and the Herald -- were merged in 1939 after leasing them to famous  newspaperwoman Cissy Patterson. She was a cousin of Robert McCormick, head of the Chicago Tribune and its syndicate. Nevertheless,  it was still considered to be in the Hearst chain, and it ran the Puck section for years.  After she died in 1948, it was sold to McCormick, and six years  after that, it  was absorbed by the Washington Post.

The Chicago American, although sold to the rival Chicago Tribune in 1956, still offered the Hearst material and straight Puck section until 1968. In a desperation move, they changed the paper’s identity in 1956  with the “Chicago’s American” moniker, then in 1969, rechristening it “Chicago Today,” but that didn’t save it, and it met its demise in 1974.

There was a book about Hi & Lois published in 1986 and reproduced in 2005, called The Best of Hi and Lois, written and edited by Brian Walker. You can find several reasonably priced copies on Ebay right now. I would recommend it.

Lois was a classic Dik Browne pretty girl, she looks very much like the gals in his earlier ad comics, such as the “Roger Wilco” series pitching Powerhouse candy bars. Oddly, the first version of Lois had her look much differently, including that she was a brunette, as seen in the earlier posts mentioned in last week’s entry. Browne from time to time altered her appearance, usually just by changing her hair style, but I notice in the early 1960s, she suddenly sprouts freckles, I guess as an homage to Doris Day. Maybe it was just fashionable. Trudy by Jerry Marcus began in 1963, also fitted out with Day-like pecas, which also went away after a short while.

As seen in recent entries here, the main reason for Sunday comics’ diminishing size was advertising.  In the half-page size, the top tier of panels offered years ago, as in the Hi & Lois strips last week, were expendable. In fact, the headstone (newspaper jargon for the title panel) and two inconsequential trash panels (more jargon) are made to be chucked to configure a third-page size, which has become the standard now.

The smaller space unfortunately means that finer details that Mr. Browne loved to produce, went the way of Ben-Day, for the same reason, they just disappear in a smudge when it’s run too small. Only top strips are still offered in the full half-page size. Most papers want the third-, or even fourth-page size, though. Page space is valuable. A Full tabloid size is also offered.

Comic strip wives tend to be georgeous because beauty is associated with youth, and the young couple with younger problems is usually where the author wants to take the story thread. Cartoonists would rather draw pretty girls than homely ones anyway, at least the male artists. In the cartoon world, perfect people, or perfect-looking people, are possible by mere whim of choice. Beautiful girls are the default setting for cartoon females. Simply, the ones that are not so attractive are that way for a reason, usually to indicate personality traits, for instance, Maggie, Loweezy or Helga look their parts.

Yours until our next blast,

The One and Only KING FEATURES ARCHIVE GUY.