Ask the Archivist: TILLIE THE TOILER 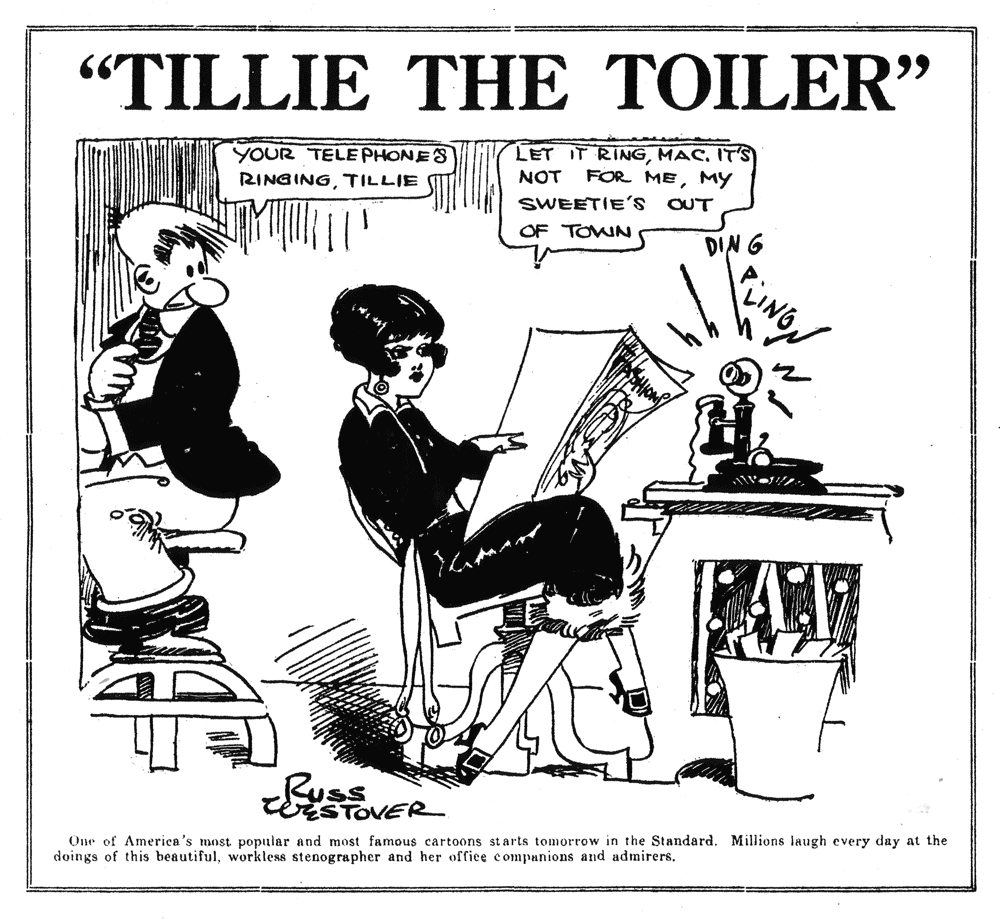 It’s sometimes said that working women were a recent comic strip phenomenon, but the first one was in 1907-08, (“Sallie Snooks, Stenographer” by Dink Shannon for World Color Printing). The second was the daily, later Sunday also, Somebody’s Stenog by Alfred Hayward for the Ledger Syndicate in 1918. The third was Wood Cowan’s “Miss Information” in 1919 over at the George Mathew Adams syndicate.

King Features didn’t field a working girl strip until January 1921, when Tillie was launched. The artist was Russ Westover (1886-1966), who had worked for several syndicates including a term on the staff of Hearst’s San Francisco Examiner.

Tillie Jones was much like her sisters in the other strips, including her main competition, Winnie Winkle The Breadwinner by Martin Branner over at the Chicago Tribune Syndicate, that is, she started out as a gag-a-day strip that soon turned into a continuity, although in its last years, it became a gag strip again.

Tillie was secretary to Mr. Simpkins, a large, middle-aged big-business man type.  She was in the outer office, back-to-back with “Mack” MacDougall, a tall book keeper. (He was also married with kids at the start, but in only two or three years he became very short, younger and free of matrimony.)

She was hardly a model of efficiency though. In fact she was stunningly incompetent. She would misfile documents, duck work, waste time with personal trivialities, and con others into wasting their time, too. Nobody ever holds her to task for all this ineptitude, and she remains vacuously self-centered. Her annoying catchphrase is “All rightie!”

Most of the office staff is male, so perhaps it’s a robust sense of chivalry that prevents her from getting the sack, or even yelled at.

Maybe she’s in some government union and can’t be fired. A mid-1920s promo for the strip describes her thusly:  “She moves slower than a crippled worm and works less than an I.W. W. in prison.” Westover made the most of this office work theme for years, until the story continuities in the 1930s, which we’ll look at some other time. 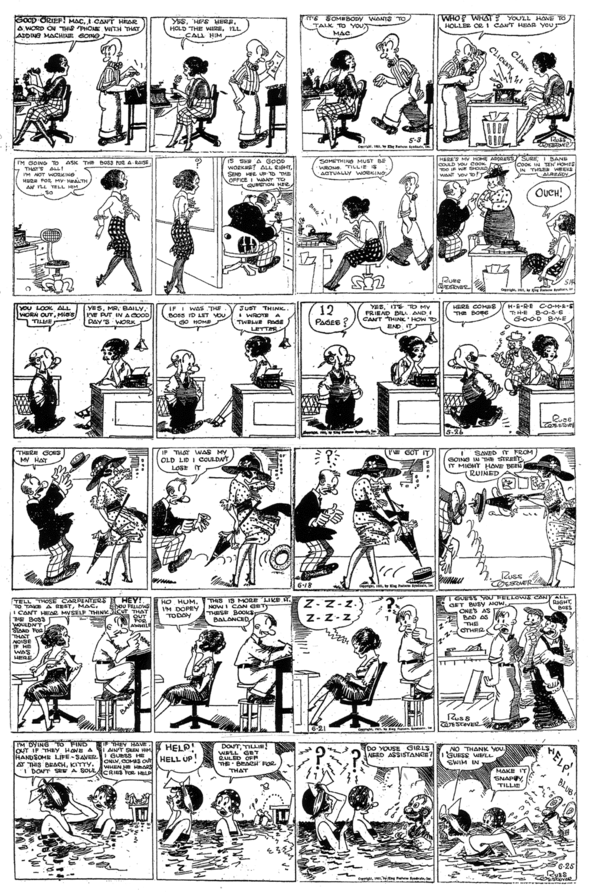 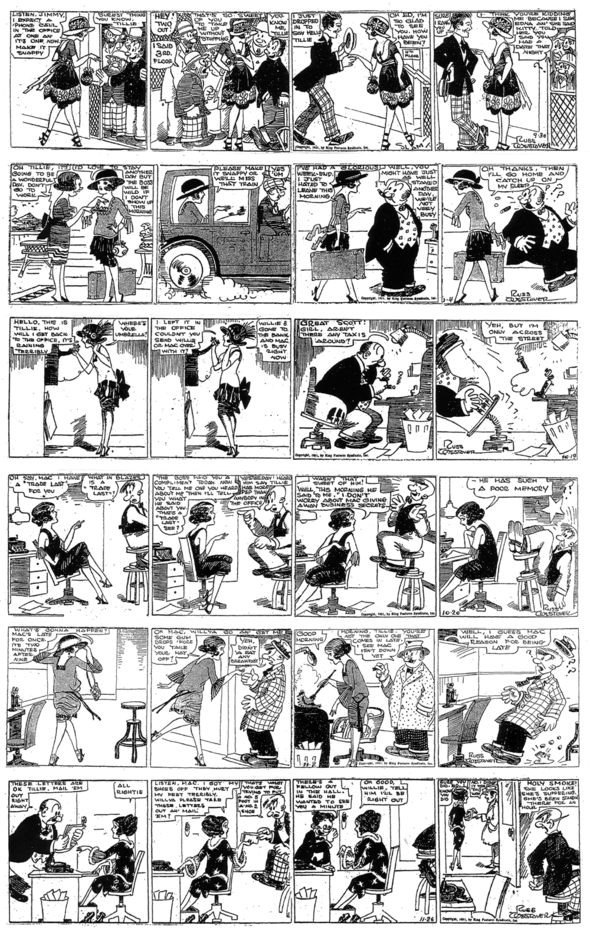 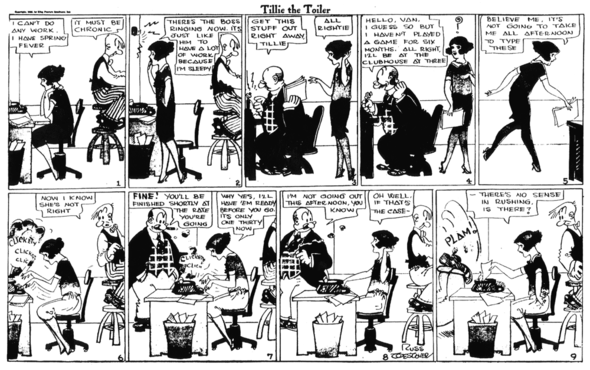 The first Sunday Tillie is supposed to be in October, 1922, yet I uncovered this one shown above in a microfilm file of the Washington Times for 2 April 1922. It is a half page rather than a full because it was used to share the page with an ad for Wrigley’s chewing gum. Such spaces were often filled with one-shots – like a revival of T.E. Powers’ Charlie & George or Tom McNamara’s On Our Block. These ads were not featured all around the country, or even in the Hearst chain, so it may have only run in the D.C. paper.

Here’s a couple more at this old posting:

Yes, Buster’s famous pay off, his “resolves” to go forth and do better,  emphasize a greater good and dedication to the better angels within us all, but just how sincere are these mea culpas week after week for nearly twenty years? In that time, he’d rather had to have done something contrary to a previously covered apologia, one would think.

Buster is more of a politician than a true penitent.

Outcault was an expert delineator of slapstick pandemonium, which has always been a  big part of classic American comedy. However, RFO was sometimes unable to stop himself from going too far. The violence crossed over from being the free-to-enjoy fantasy abuse of Jiggs, The Three Stooges or Wile E. Coyote, to something close to real cruelty.

There’s a RFO Yellow Kid page where the neighborhood kids have cornered the dog catcher, and have him down on his back, and they are stoning him.  We’re apparently being invited to laugh from our front row seat at a murder in progress.  That’s the kind of thing that very soon was replaced by far more responsible principles when actual syndication and competition began.