Ask the Archivist: IN THE LAND OF WONDERFUL DREAMS, Part 1

Last week we saw a KFS series that was so remote its actual name couldn’t be discerned. This week, we take a look at one of the all-time most legendary series.

Winsor McCay (1869-1934) will be forever remembered for the early Sunday  series “Little Nemo in Slumberland.” McCay was able to create fantastic landscapes of bizarre cityscapes or the natural world, inhabited by incredible people or creatures. He also had the ability to produce masterpieces quickly, and a lot of secondary works, daily gag strips, editorial cartoons and story illustrations at the same time. He was nearly a non-stop cartoonist, even doing animation, using the primitive method of producing every frame as a separate drawing, involving thousands of pictures, creating such historic films as Little Nemo (1911) and Gertie the Dinosaur (1914).

Nemo was created in 1905 over at the New York Herald syndicate, where it immediately became a hit, and really the only star strip they offered after Outcault left with Buster Brown in 1906. Just as he went over to Hearst, McCay followed in 1911.  One hundred and five years ago this week, in fact, came the notice (below) that the team had a new member.

On 28 June 1911, the spot where the daily editorial cartoon in the Hearst Evening papers (the back page) was given over to the announcement that the great Winsor McCay was aboard. The characters he shows in amongst Little Nemo and company are some that had been in his various Herald series, but actually didn’t make it to Hearst. The “Silas” he refers to is the nom de plume he used for some of the Herald’s secondary line of syndicated products, the New York Evening Telegram material.

As his Herald contract ebbed, his other creations didn’t all make the switch to Hearst, and new non-Nemo ones soon appeared in the dailies. See:

The first Hearst Nemo cartoon, (rechristened “In The Land Of Wonderful Dreams”) was on 3 September 1911. It was the same setup as the old series with the same characters.

Nemo is a little boy with two black spots for eyes. McCay’s mastery of precise details in clothes, body shapes and poses didn’t extend to faces. His people mostly have  simple  dot eyes, with a dead look that added to the overall strangeness.

The other main protagonists were his dream girl, the Princess of Slumberland; Doctor Pill, a joy-killing spirit interested in guiding the Princess and Nemo; Flip, a hot-tempered tough guy, ready to start fights and make trouble; and Impie, a mischief loving-wild man, black African caricature, devoid of any inhibitions. Other inhabitants could be giants, cavemen or monsters. Nothing is predictable.

Though Slumberland is supposed to represent the elegant architecture of imperial palaces or majestic millionaire’s estates, it resembles the structures at an overblown turn-of-the-century amusement park or gaudy exposition. It’s so highly overdone in size and ornament, it gives a sense of looming menace.

That their adventures represent anything more than just slapstick fun or even nascent science fiction is debatable, but I’m of the view that there is some psychological dimension to the series and the performers.

My theory is that the series is about frustration and uncertainty. If the Princess and the Doctor represent authority, and each installment is set out to resemble a formal royal grand tour of the kingdom for guest of honor Nemo, yet the dignity and politesse is quickly overwhelmed by Flip and/or Impie. The characters vested with authority and prestige can’t control their cohorts bent on chaos.

That some of Nemo’s friends are incapable of avoiding trouble, sometimes on a disastrous scale, and others powerless to exercise any supposed power by rank, should leave one wary of trusting others. It doesn’t help that the laws of physics can fail by way of magic at any time. In the dream world, nothing can be depended on. Yet Nemo has no choice but to return again next week, come what may.

If Nemo wasn’t a schoolboy, I might add that the ultimate in disappointment is a girlfriend that can only exist in a dream, and always in the company of inescapable, rowdy companions. What happens to Nemo when he’s not out cold? Like most of McCay’s characters, they lead such dull lives, we see little more of their “real” lives than when they wake up.

Here are several pages from the first year of those dreams. 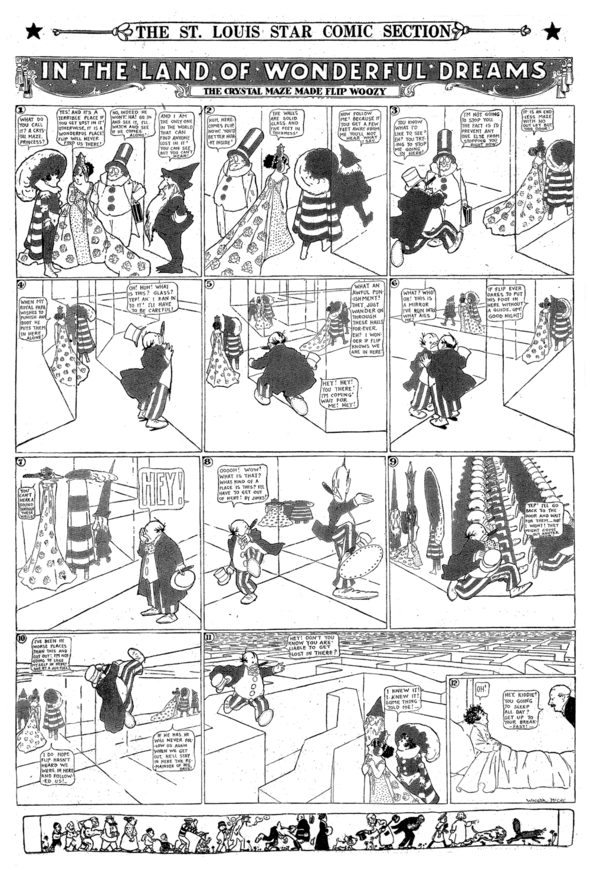 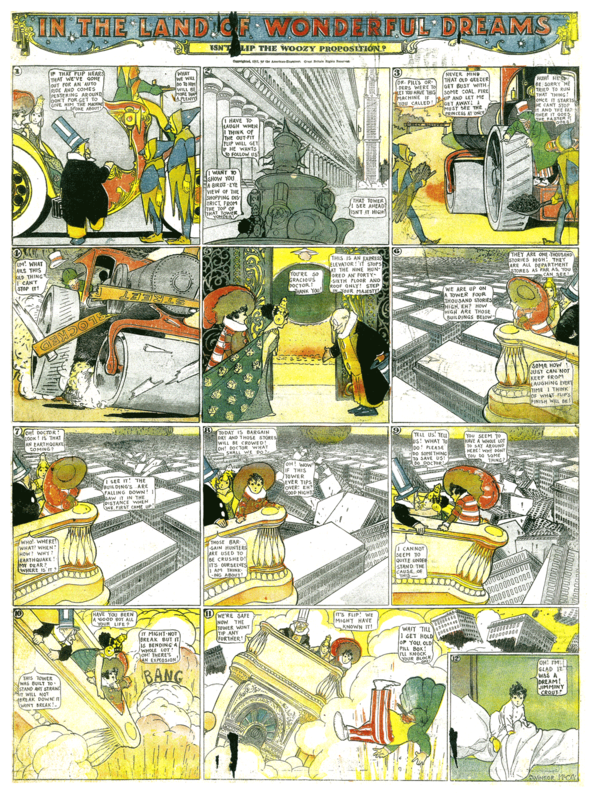 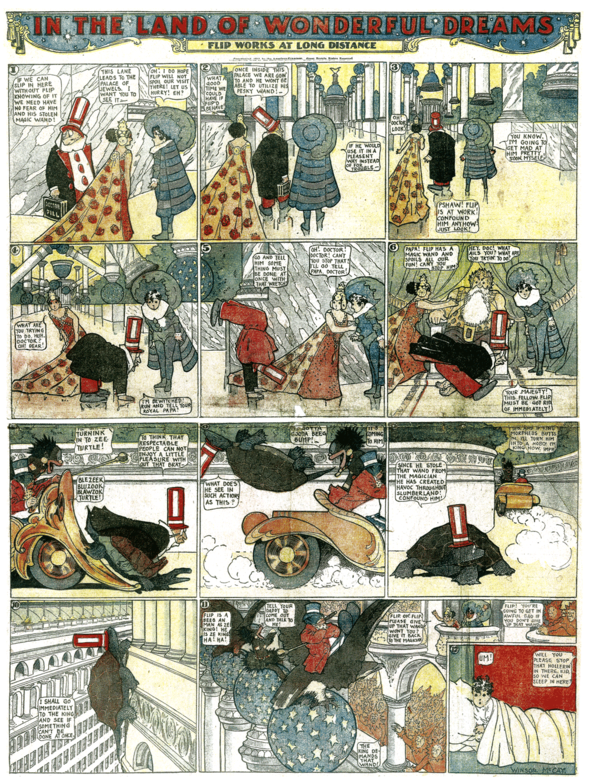 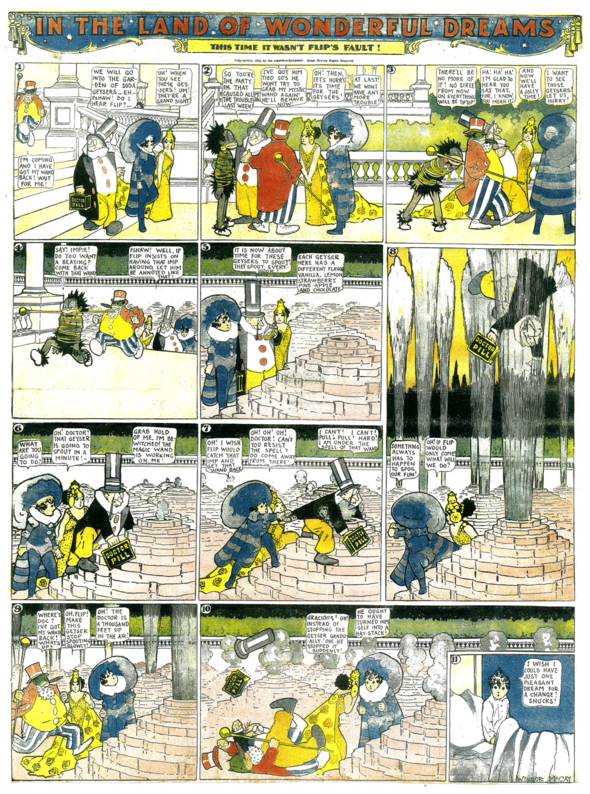 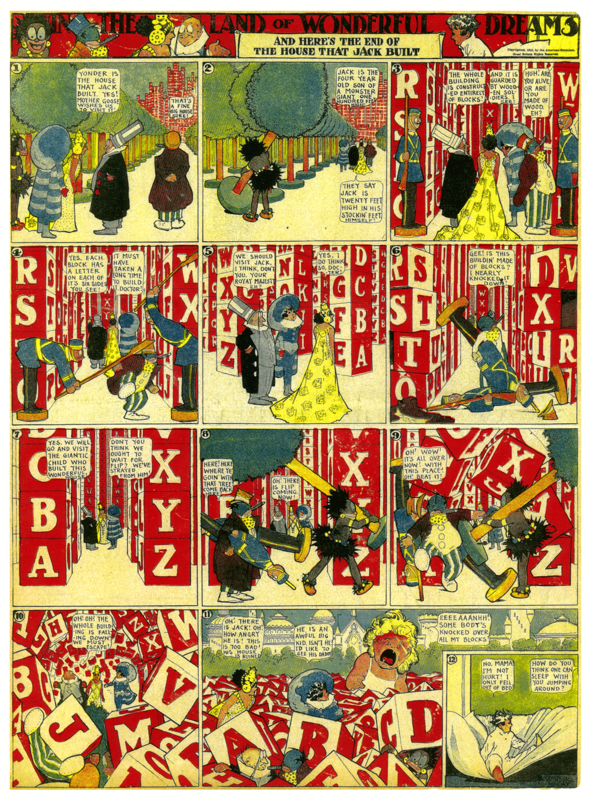 We will revisit Nemo later on this year.