Many know that one of the most famous of early comic strips was H.C. “Bud” Fisher’s Mutt & Jeff, but did you know it was once a Hearst title? It was 100 years ago.

The adventures of Mr. A. Mutt by Bud Fisher began at the San Francisco Chronicle, concentrating on sports and local politics, in November 1907. It was an overnight hit, and, ever on the lookout for reader-pleasing attractions for his papers, William Randolph Hearst lured Fisher over to the Hearst morning paper, the San Francisco Examiner, with a salary-doubling offer only a few weeks later. 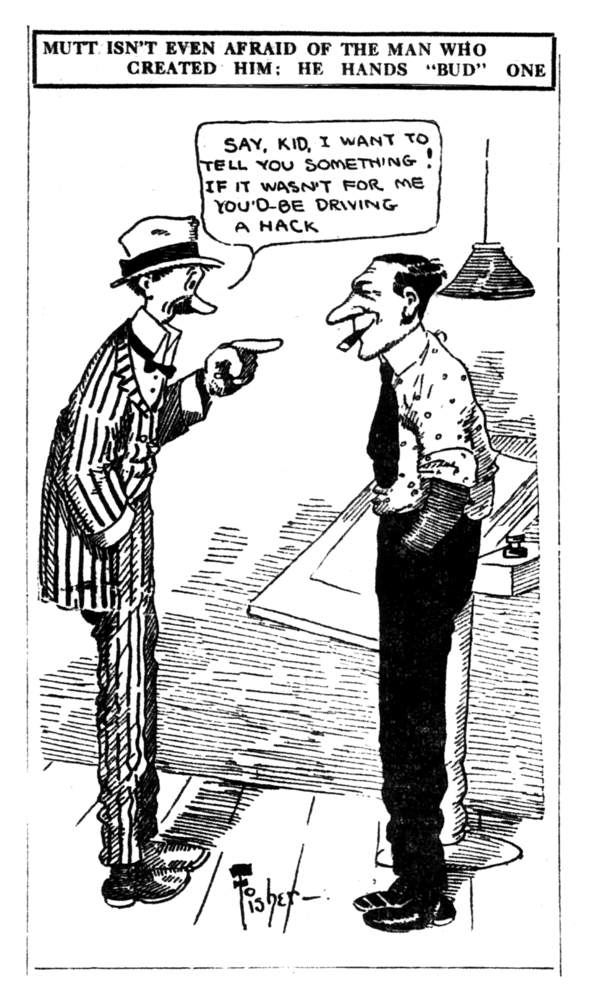 In an early 1908 sequence, he picked up Jeff, originally a madhouse inmate who fancied himself boxing champion, Jim Jeffries.

Fisher had the foresight to write on the last Mutt strip he did for the Chronicle, “Copyright by H. C. Fisher.” It went unnoticed by the editors, and because it was published as such, Fisher could eventually claim the legal ownership of the series. In the few weeks that this was in dispute, the Chronicle ran their own version of the popular series, now drawn by staff artist Russ Westover. When they lost control of the strip, they had Mutt get killed in the last episode! 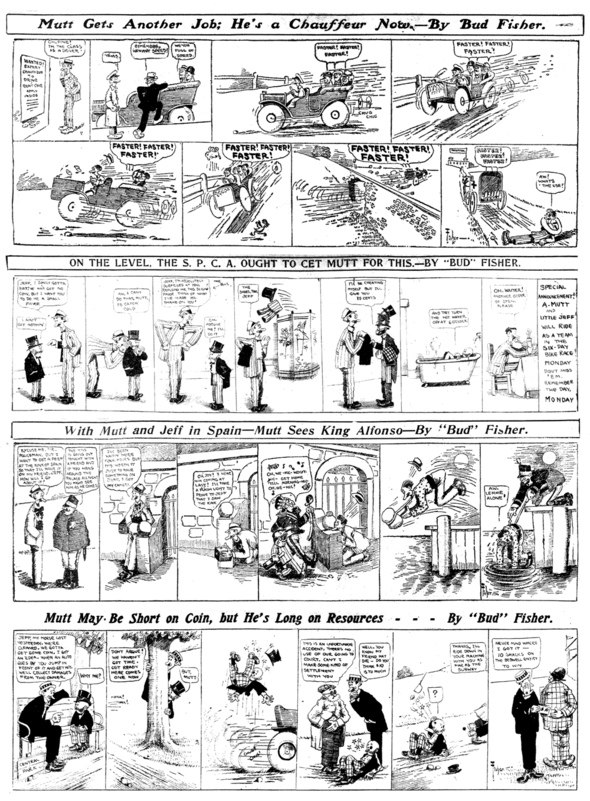 Hearst brought Mutt & Jeff proudly to his papers; sometimes they even ran on the covers. The short-and-tall duo’s adventures delighted strip readers.  Their storyline was simple: friends who tried to cheat and outdo the other out of money, girls or food. Jeff’s supposed to be the stupider of the two, causing undue problems, or issuing idiotic replies to Mutt’s straight lines, ending in a painful response back. Jeff retaliates, too, making it a very violent comedy milieu. Fisher always seemed to have about five gags endlessly repeated though. The one seen here, where Jeff meets King Alphonso XIII, was repeated a hundred times over the years, with Mutt surprised to find Jeff in the company of almost any world figure, from royalty to presidents or anyone in the news. Though their antics, from this time anyway, seem very stale and predictable now, they were superstars of cartoon wit, circa 1910. 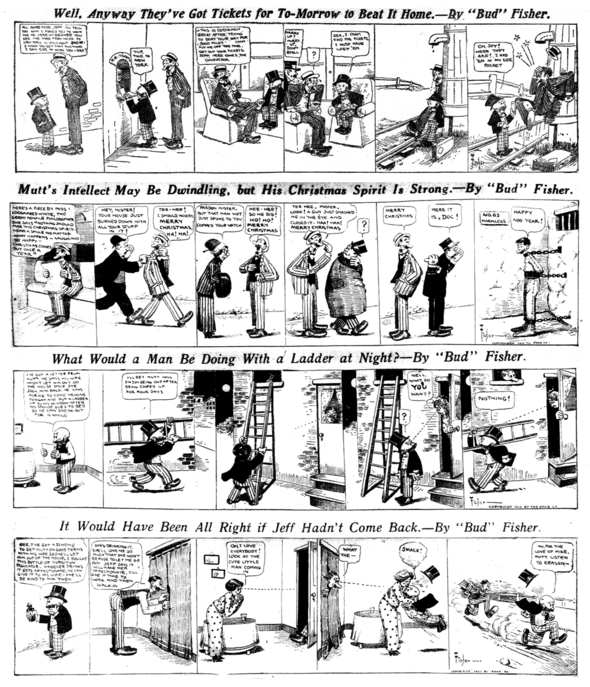 Mutt and Jeff were seen in the chain’s weekday editions, and sometimes a “daily” format strip would show up in a Sunday edition, usually in the sports section.  It would seem that Fisher was reaching the ultimate status for a comic strip artist of the time — to be part of a Hearst Sunday comics section – when Mutt & Jeff appeared in the 27 March and 10 April 1910 sections along with the superstars Little Jimmy, Katzenjammer Kids and Buster Brown. But never again – and I don’t know why – unless he was asking for too much more money or something. Perhaps they second guessed that it would give Fisher cause to ask for more money. Maybe Mutt & Jeff were deemed not the kind of strip desired for the comic section, and should stay relegated to the more adult sections. 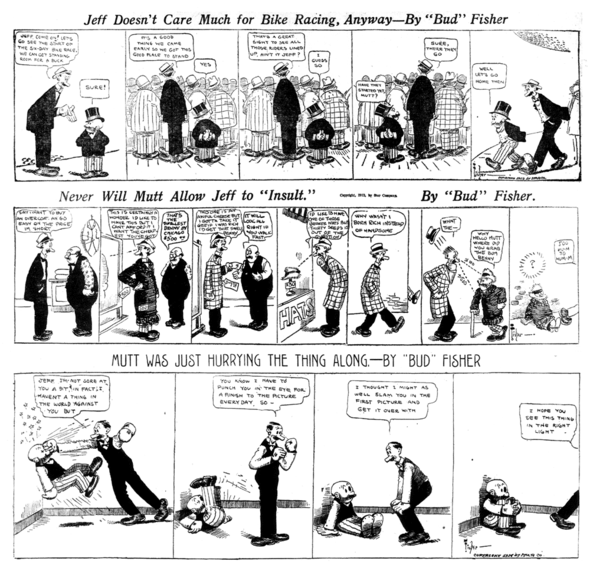 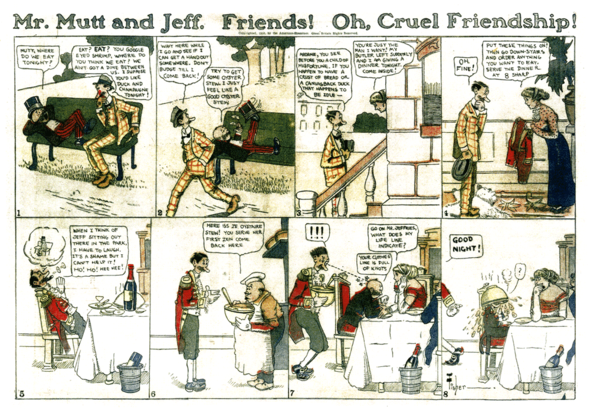 By 1913, Fisher was looking to get out of his arrangement with Hearst, and see if he could make more with another publisher or even self-syndicate. He made plans to join the fledgling Wheeler Syndicate, but Hearst took him to court.

It was settled in 1915, and the verdict was simply that the name “Mutt & Jeff” was Bud’s.  It seems that this was always the case when an artist left, that the name, or trademark, and not necessarily the characters, was the valuable property.  For instance, when Outcault left the New York Herald Company to join Hearst in 1907, he was able to take the character of Buster Brown with him, but not his name, so a subtitle was added to each episode, but the feature never apparently had a series title. Same thing with Winsor McCay’s Little Nemo in 1911. It became “In The Land Of Wonderful Dreams” at Hearst. George McManus left Pulitzer with the name “The Newlyweds,” and at Hearst, the series continued as “Their Only Child.” Fisher was very savvy about all this, and he could retain the trademark because he registered it when he left the Chronicle.

We at Hearst would not let such a hit property escape entirely, and twice, just before the suit ended, we had offered two full-page Sunday pages, not by Fisher, but Ed Mack. In the end, these were of course not allowed and never went any further. 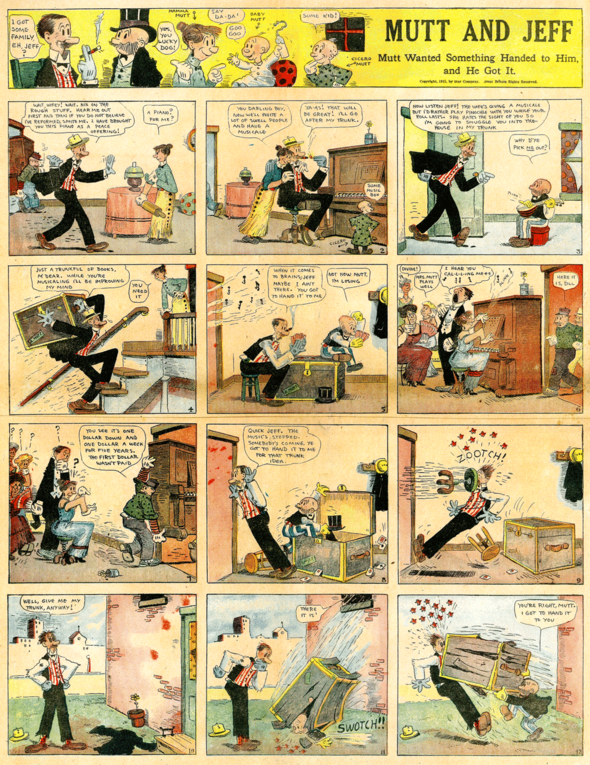 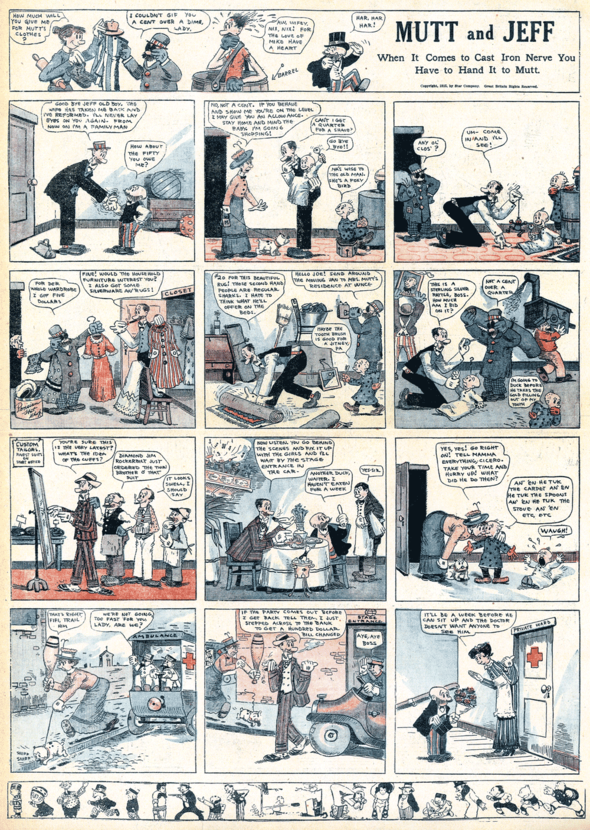 But we had the last, if less-than-hearty, laugh. We reissued old dailies, tying two together and renaming it a Sunday strip. It also had an ambiguous title, usually using the actual subtitles from the original dailies. These had already been done for us at the “Star Company,” which was the corporate name at that point (before “King Features Syndicate”). This went on from 1919 to as far as I can tell, early 1922. Sometime in 1921, “Star” was dropped and it became a King Features Syndicate series. There were also several attempts to syndicate the old Fisher strips as dailies, but they never were much competition to what Fisher had, and so the Hearst-Mutt & Jeff relationship quietly faded away. 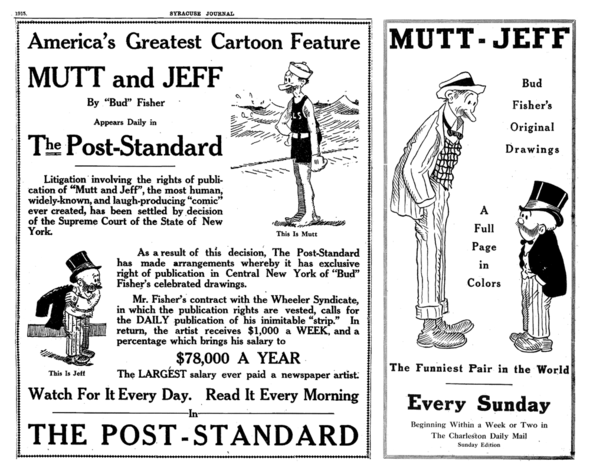 Promo in the Syracuse Journal (11 September 1915) explains the coming of Fisher’s new strip, and one for the Hearst concoction of reissued old ones (1920). Notice there’s no “and” between the words “Mutt” and “Jeff.” 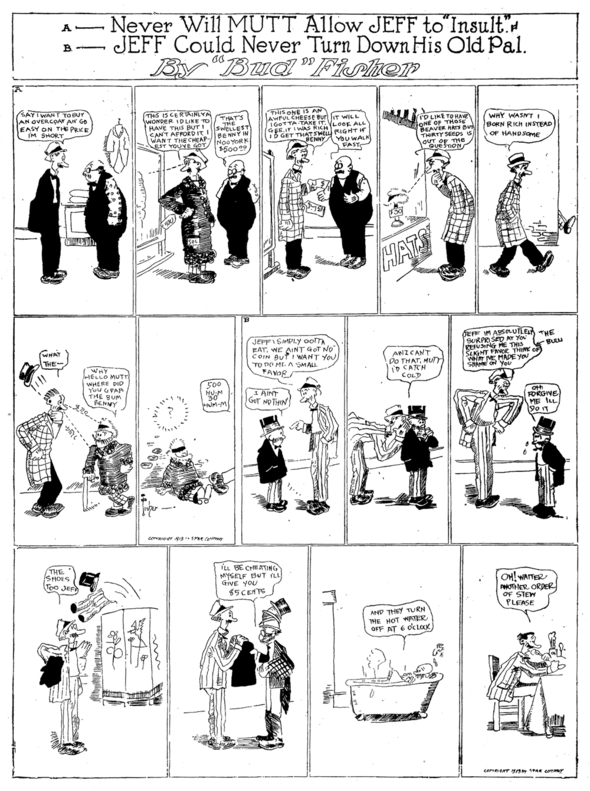 Mutt & Jeff: An example of the reissued dailies as a Sunday. (20 November 1920) This one was just weakly traced.

Here’s How seemed almost like something Mr. Edson was commissioned to do, I get the impression he’d rather have been doing his old sports panel.

Sorry it was such a stinker- but as far as I know, the “Here’s How” panel has been heretofore never seen or heard from again in any book or blog, so at least you can say you’ve seen something rare. This is all very educational, is it not? You can say you’ve learned something. Even if that thing is you hate Gus Edson.