To celebrate, I asked all the cartoonists to share photos of their dogs-- and other pets.  And what I've learned?  Cartoonists LOVE their canine pals! 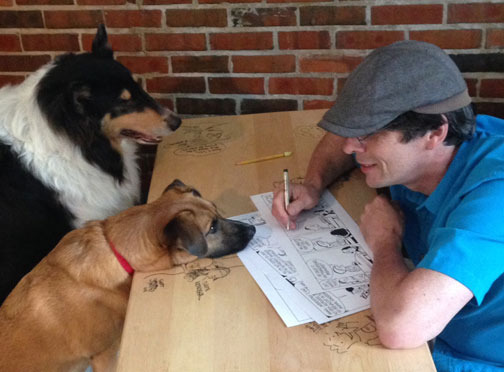 Two of my best friends, Laddie and Cookie. Sometimes they don't understand my humor.
--John Hambrock, The Brilliant Mind of Edison Lee 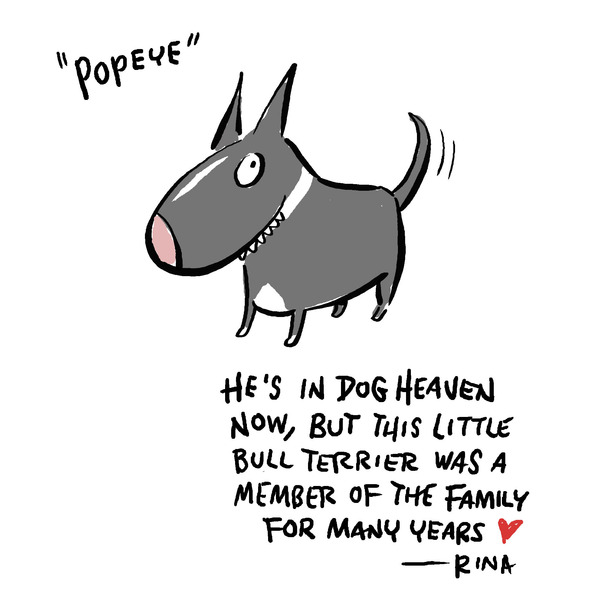 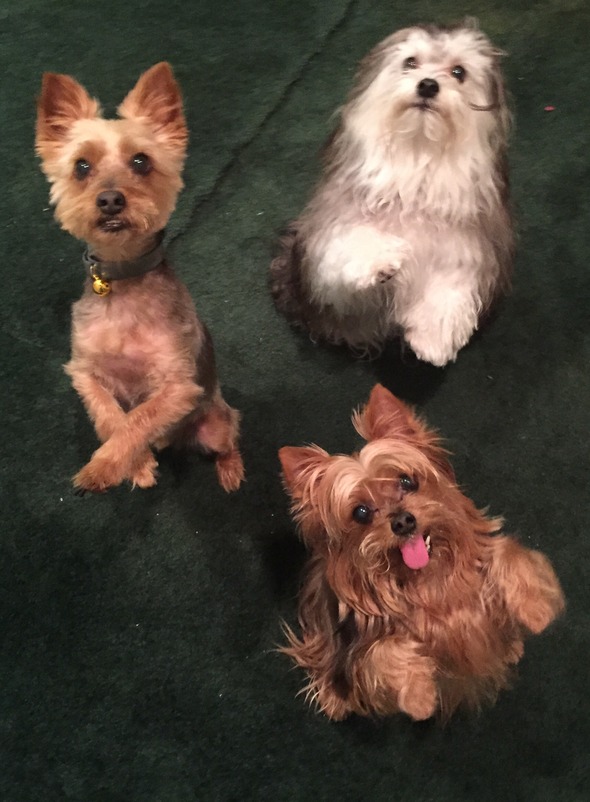 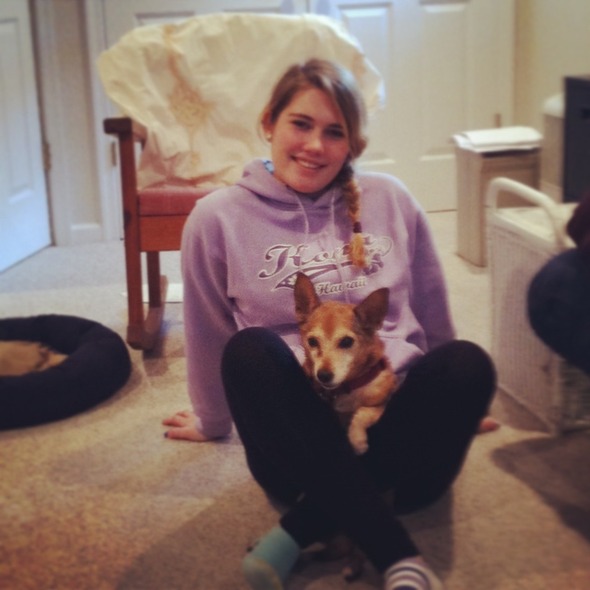 Earlier this year, we lost our family dog of close to 18 years, Biscuit. She was a great dog, more like a little sister to both of our two daughters, Meredith and Sarah. Sarah is seen in the photo here with Biscuit.  We rescued Biscuit from the SPCA when she was six months old.  Up until about the last year, she was a studio buddy for me and spent much of the day resting on a blue pillow near my drawing table.  When she was younger,  I used to love watching her chase rabbits in the backyard (she even caught one once!).
Many years ago I decided to give Jughaid’s little girlfriend, Mary Beth, a pet dog in the comic strip.  Since I have always thought Mary Beth looks like our daughters when they were younger, I created Mary Beth’s pet dog in the image of our dog.  I even named her Biscuit.  So now, even though our family pet is gone, Biscuit will live on in the Barney Google and Snuffy Smith comic strip as a semi-regular character.

In "Fastrack" a while back, the Welding family had a digital pet called Meg the Cyberdog. Meg was based on our daughters' terrier, Princess, who graced us with her presence for 16 years.
--Bill Holbrook, Kevin & Kell, On the Fastrack, and Safe Havens 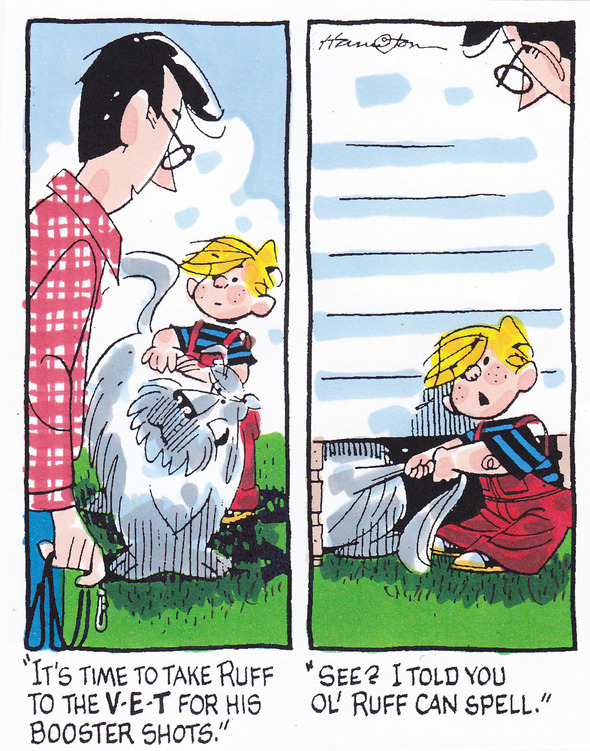 Ruff is always a great source to rely on for laughs.
--Ron Ferdinand, Dennis the Menace 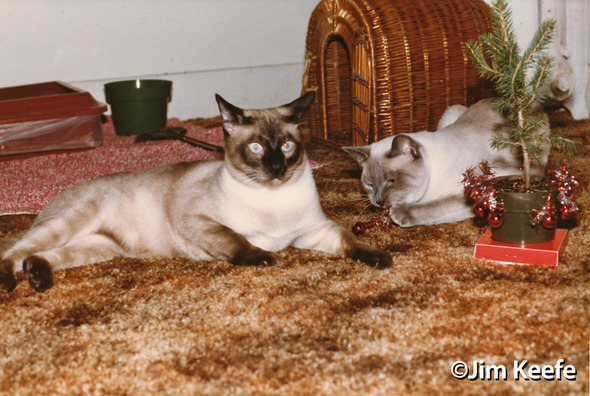 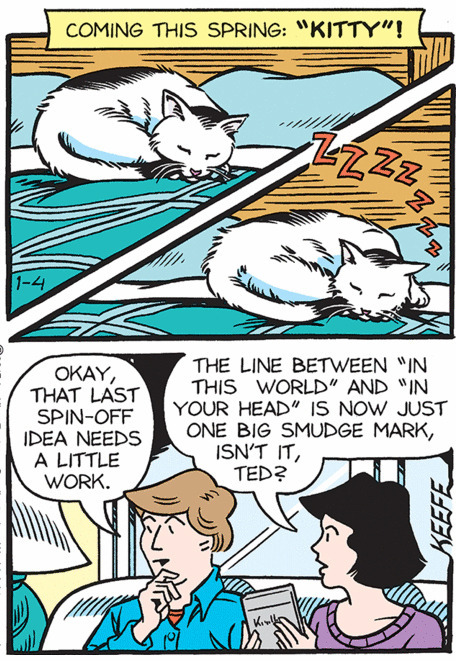 Never had a dog, but had cats when I was in college. As the old song goes, they were Siamese if you please - they were siamese if you don't please.
--Jim Keefe, Sally Forth

When my wife and I got married twelve years ago we suddenly had a tribe of five teenagers, three dogs, two cats and a Quaker parrot. Easily the toughest one to handle of all was Cozmo, our Jack Russell terrier.

Coz had the Houdini-like ability to get hold of dollar bills — we never learned how — and chew them to bits. He squirmed away like a seven year-old boy if you tried to hold him. His favorite game was to hold the end of a chew rope with his teeth and have my son swing him in a wide circle. Cozmo was blessed with a yard full of moles and his nose was always covered with dirt. During a year-long stint when he went to live with my grown son in Hollywood, Coz was  fawned over by beautiful actresses and celebrities on the streets. He hated it.
--Jim Borgman, Zits 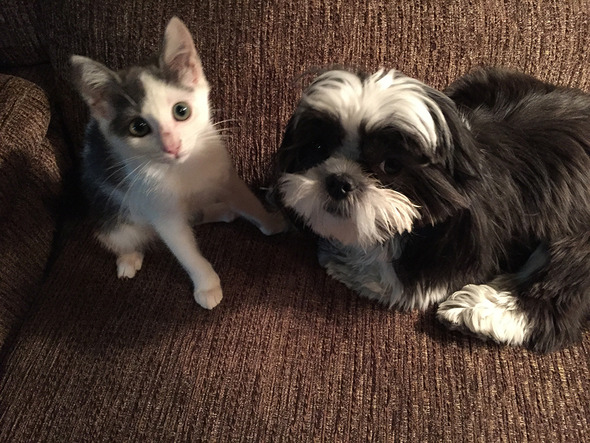 Buttons (the kitten) and Mini not only bring a lot of joy and fun into our family,
they also keep me company in the studio…lounging in the window,
taking over my chair if I get up for a second, and instantly confiscating my pencil,
eraser, or any other item that accidently falls on the floor.
Their curiosity and energy help to make drawing DENNIS everyday even more fun.

I don't have any pets, but a few years ago, Mary temporarily fostered a lost beagle named Chester until his owner was found.  It was a good experience for both of them.

Here’s a link to a blog post on the Hi & Lois website featuring Trixie’s “Ode to a Dawg.” 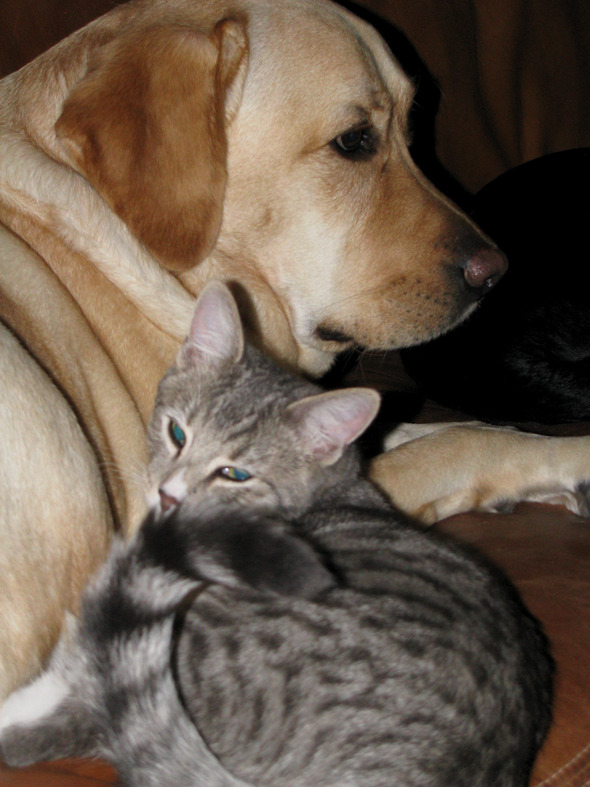 This is our beloved Moose–the first of four Labs—and Chuck Norris (named for his fearlessness). Chuck  slept with Moose from tiny kittenhood despite the 100:1 weight ratio.
--Rick Kirkman, Baby Blues 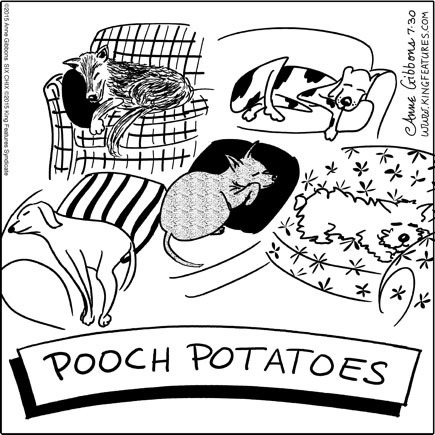