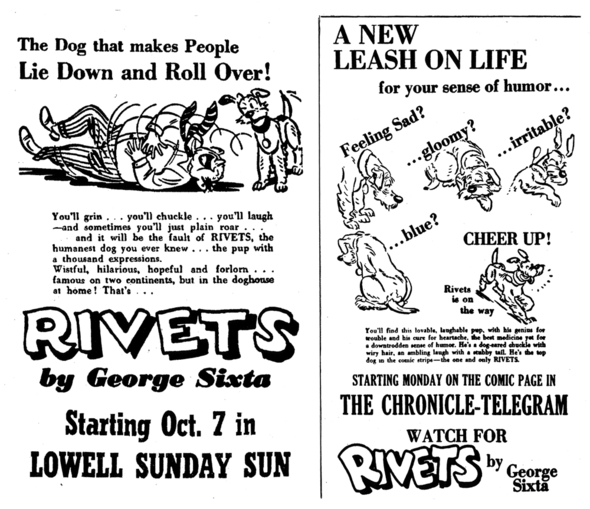 RIVETS promos from the 1950s

There have been many famous comic strip dogs—usually the companion of the lead character, like Dennis’s Hot Dog, or H?gar’s Snert. Few get their own strip, but one that did was Rivets, by George Sixta (1909-1986).

Like Hazel and Henry, Rivets at one time was a feature in the Saturday Evening Post.  Sixta was a gag cartoonist, and once syndicated some series on his own, like Picking Off the Spares, a Believe It Or Not-style panel about bowling.  During World War Two, he was in the Navy, stationed in Washington, D.C., composing war maps.  Inspired by public relations materials showing that many of the warships had dogs as mascots, he thought of his own family pet and how he might fare as a sea dog. So Rivets was created in 1945. It was a hit at the Post, who signed Sixta for an eight-year hitch. When that contract ended, Rivets was just right for newspaper syndication, with some changes, of course. The syndicate that took him was Field Enterprises, which eventually became Publisher’s, and later joined the Hearst fold by way of NAS. 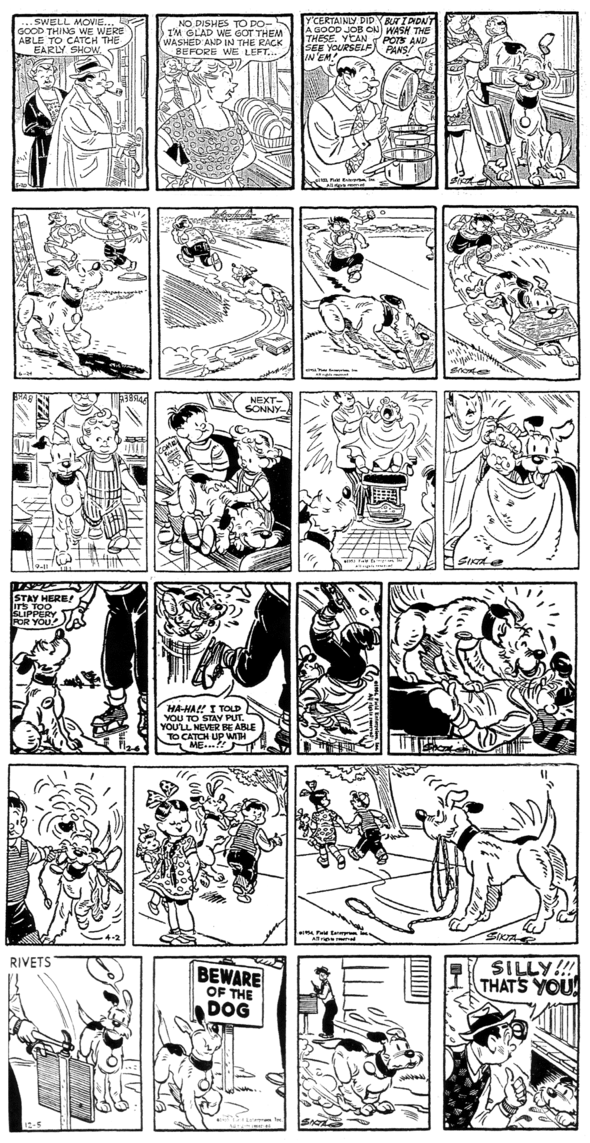 Instead of the world of sailors and battlewagons, Rivets was now part of the middle class Higgins family in the all-American town of Milldale.  The Higgins brood included the grandparents, boys Steve and Jamie, and daughter Ginny. Most of the time Rivets accompanied Steve on his adventures. The rest of the cast included rival dogs like neighborhood bully Black Bart and people like the always generous  Grandma Guddgin, and the always cynical Doubting Thomas.

D.T.  wore a shapeless wool hat that sat like a blob on his head, covering his eyes. In contrast to Rivets and his usually cheerful philosophical takes on situations presented, Thomas always had a disparaging word for any topic. Often he was cannonballed into a puddle by Rivets, who only wanted to happily pin him down to lick his face. 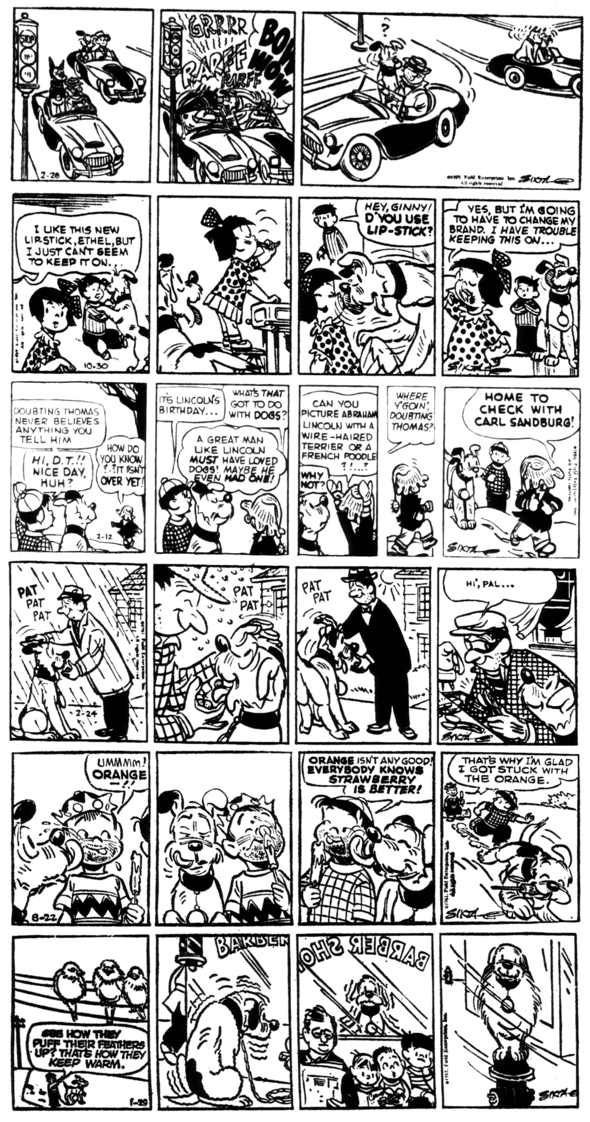 Sixta had a loose, natural style, with a great ability to depict emotions, not easy to do with a lumpy, hairy dog face. Though he died just a few years before Rivets was retired in 1989, he was apparently ill a lot as far back as the late 1960s, repeating artwork with or without altered word balloons for many years. 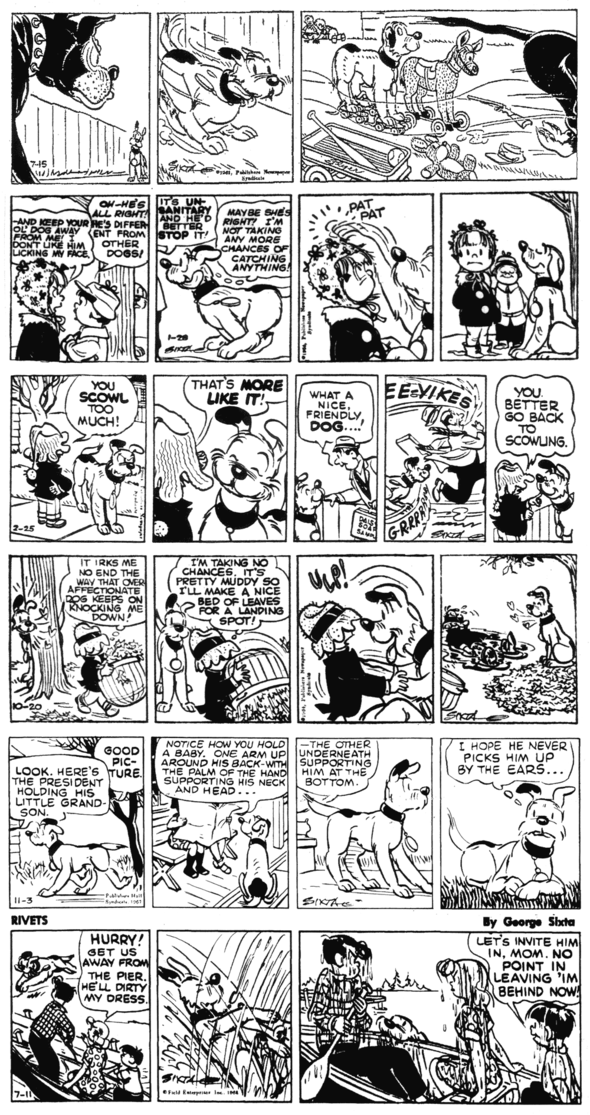 For a while, back when everyone seemed to have a dog, Rivets was a popular strip, and it held on to many followers right up to the end. When it did end, one of the most loyal client papers, The Philadelphia Inquirer, offered a special farewell 8x10 card for fans, a blow-up of a family portrait of the Higgins family taken from a 1971 strip. I can’t think of another instance of that happening again.

Now, on to comments.

You’re welcome. It’s nice to get out a real find like those first Thimble Theatre Sundays. Pity they couldn’t have weathered the years in better shape, but at least someone’s seeing them again.

We will be adding some Popeye strips, as we’ve spoken of before here in the Kingdom, but remember, these will be post- Segar stories that have not been reprinted. Give them a chance!

A hesitant thank you, I guess….That’s the creepiest letter we’ve yet received here, and you’ll excuse me now while I give a short inspection of the locks down here in the royal archives.

Cheerio until next week-