Hard to believe, but a half century has passed since the childhood favorite strip, Tiger, was launched. It was the creation of the underappreciated Bud Blake, who in 1965 had been doing a funny panel about the everyday life in suburban America called, “Ever Happen To You?” See some samples here.

It was aimed at adults, and usually focused on grown-up situations.  Running more than a decade, it never achieved a stellar place in the syndicated comic world; but when Blake created a strip series about kids, he found success. 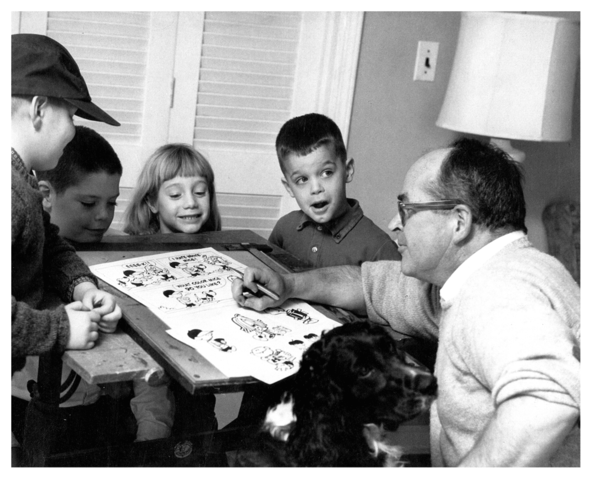 BUD BLAKE (1918-2005) entertains some real-life kids, possibly his son, Jay, and daughter, Marianna, included, with some cartoons. (I own this photo, but alas, the original caption is gone.) The Tiger strip on the drawing board is a first draft of the strip of 15 May 1965.

On May 3rd, the new strip began. It was Tiger, concerning a boy of about ten years, with that unlikely name, his 3-year-old brother, Punkinhead, and their dog, Stripe. They lived in suburban/rural surroundings with their friends: Hugo,  a big, cheerful boy; Suzy, a  moody, fussy blonde girl; Julian, the spectacled, studious kid (Julian was Blake’s Christian name); and  Bonnie, a spoiled, self-centered brunette girl. 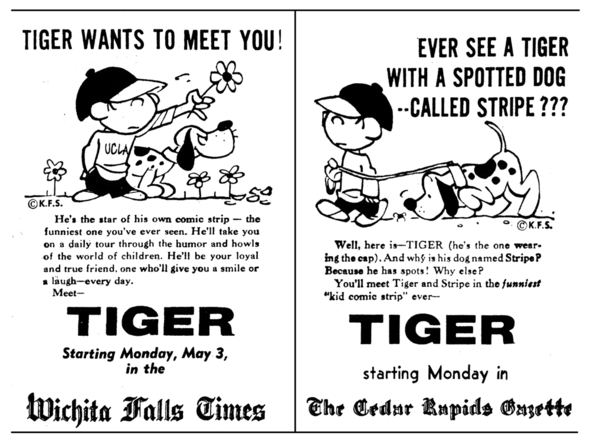 The world of Tiger is an idyllic one of a childhood without worry, school or adults. The kids are free to indulge in games and fantasy play-acting in a perpetual weekend/vacation milieu, complete with all the toys and props needed. They even manage to assemble their own planes, boats or other vehicles out of scraps and junkyard finds à la Our Gang.

Unlike the stars of a lot of kid strips, Tiger and his friends are not little grown-ups, they have no commentary on current affairs, or sober philosophical observations to offer. They can say and do dumb things like real girls and boys. There’s an air of authenticity, one can identify the cast with real children, and they behave just like kids you have known. 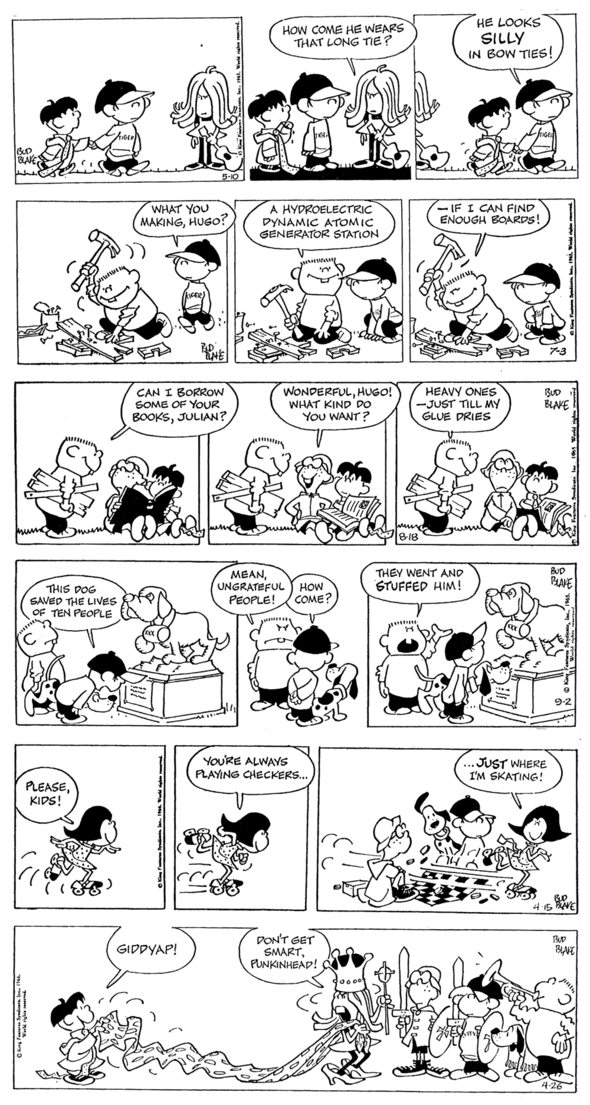 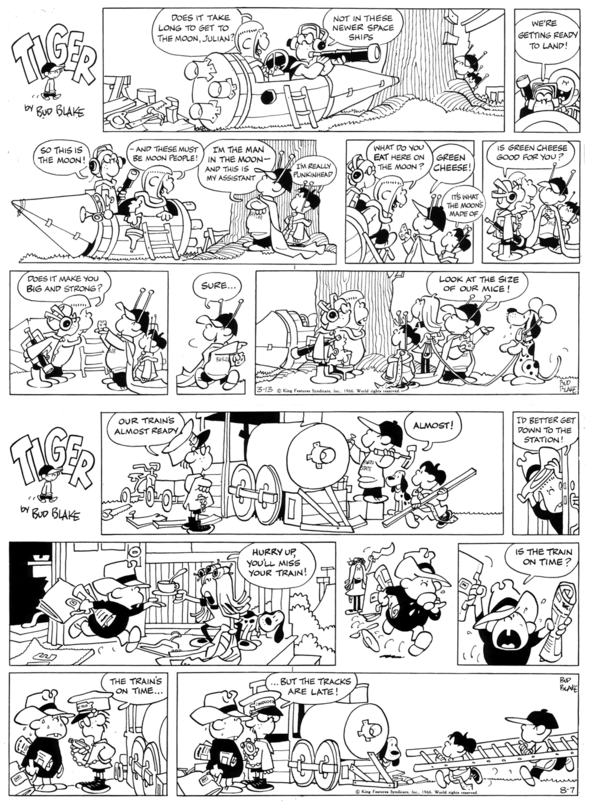 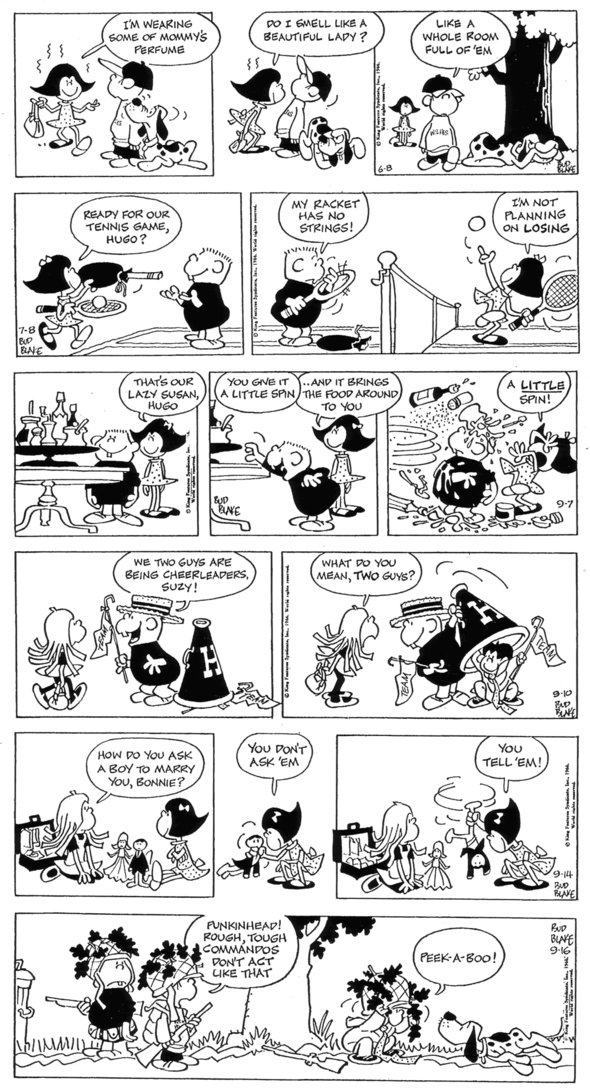 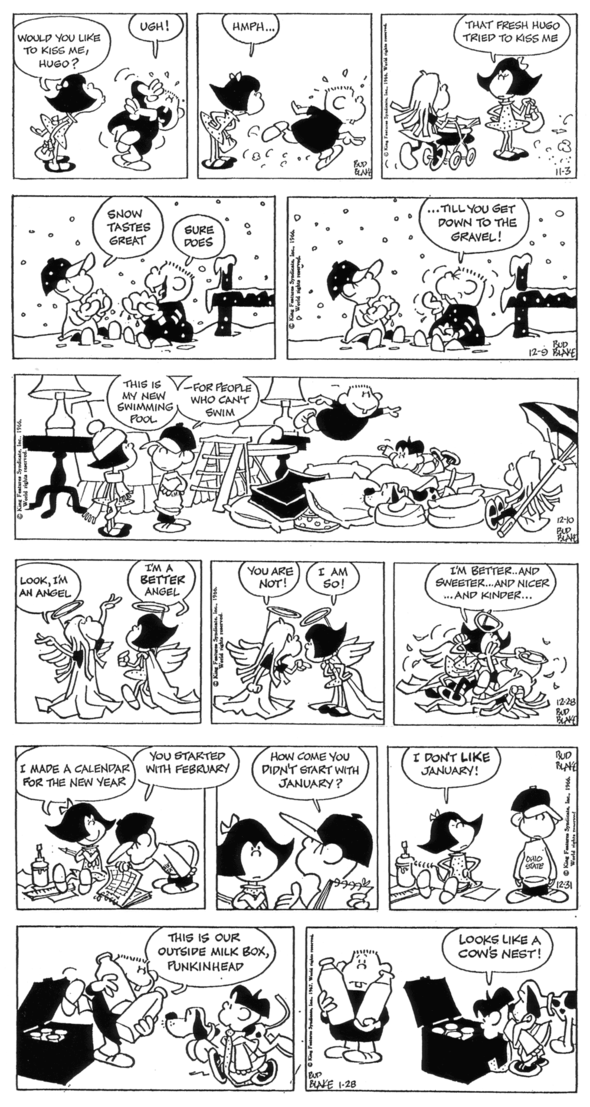 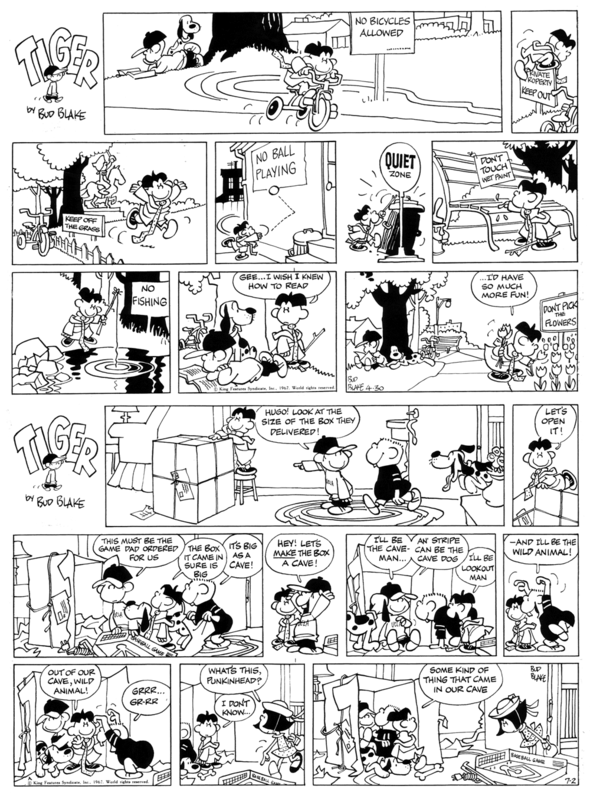 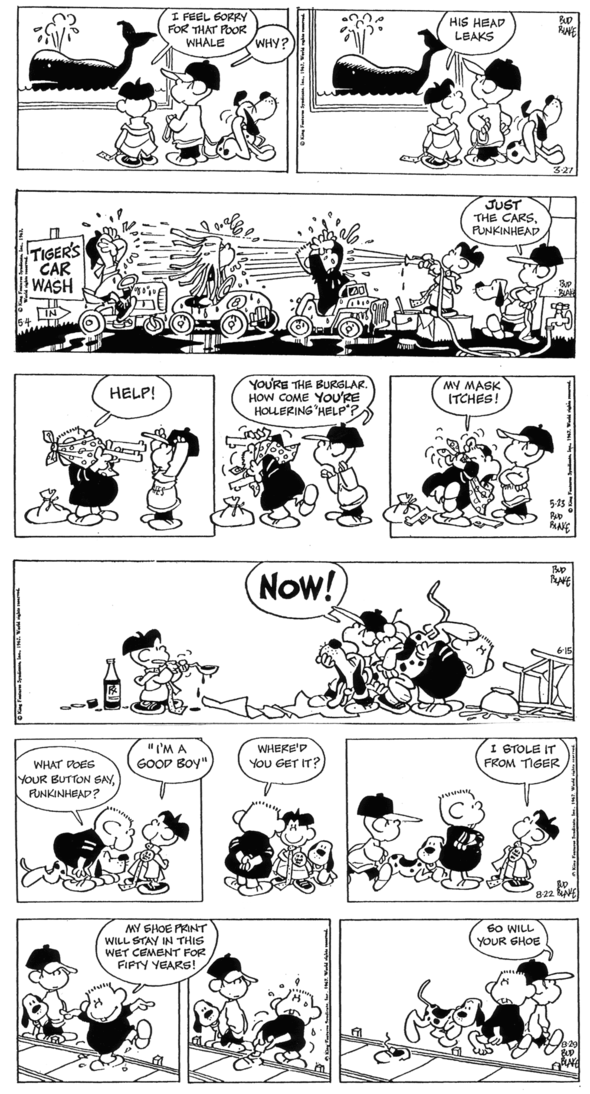 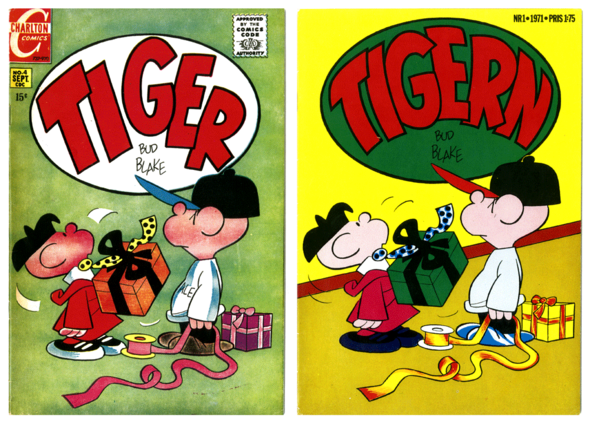 Tiger comic books: TIGER No. 4, Charlton comics, Derby, Conn. (September 1970) and TIGER No.1, Rotopress, Stockholm, Sweden (1971). The Swedes not only came up with a more interesting
color arrangement for the cover; they chose the fourth issue’s cover for their reprint,
but used number one’s contents.

When The Archivist was a barefoot boy, I could relate to the kids and atmosphere of Tiger, something that today’s computer- and iPad-obsessed generation will probably never know. Reprints of the strip are still syndicated today and can be seen here.

It was rather ironic to mention Grin And Bear It just as it was cancelled, but I write some of these little tirades a few weeks in advance, and the demise of the venerable old panel caught me gobsmacked. Perhaps I’ll do a memorial entry on it sometime.

The entire civilized world was grateful to the Allies, and especially the United States…at least for a little while. In the first hours of peace, there was some confusion about what was the actual, long awaited “V-E” day, whether it was the seventh or eighth of May. The term V-E day, for Victory in Europe, was familiar to the whole world in advance of that longed-for event, at least as far back as D-Day.

However, its designation was unclear to one newspaper, the Philadelphia Daily News, which ran the bold headline “Victory in the East!”, implying confusion over which theatre of war we’d just triumphed in. It’s hard to flub coverage of one of the pivotal events of the twentieth century, but it could be done.

Yours till next week!

P.S. Keep an eye out -- we’ll soon have a special treat for Thimble Theatre fans,