Ask the Archivst: The Winner of Vintage Madness Is ... 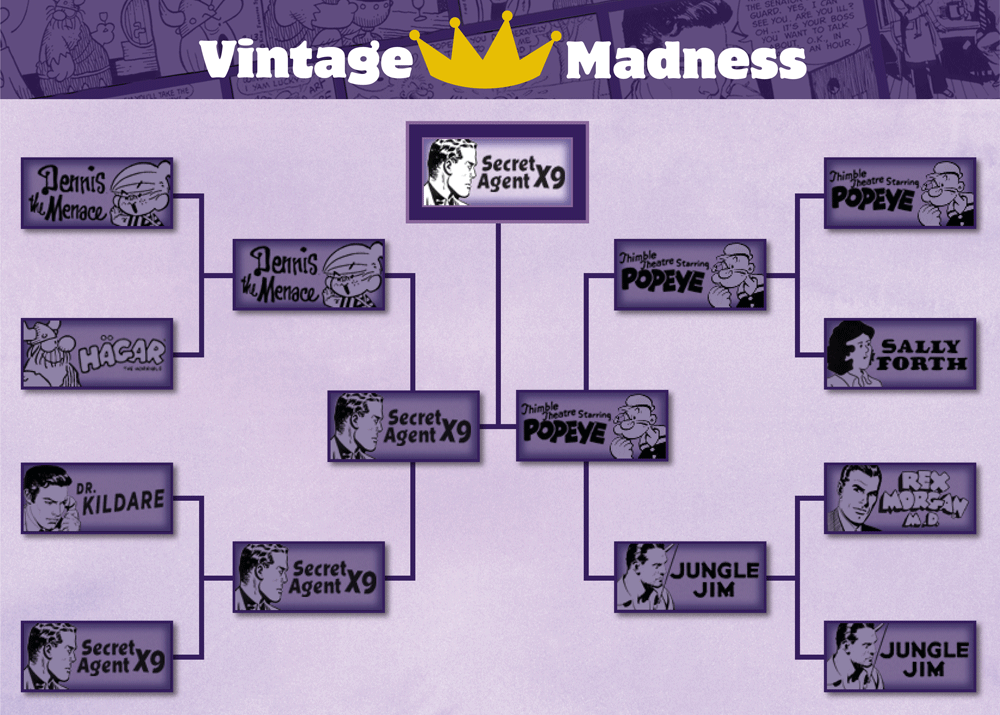 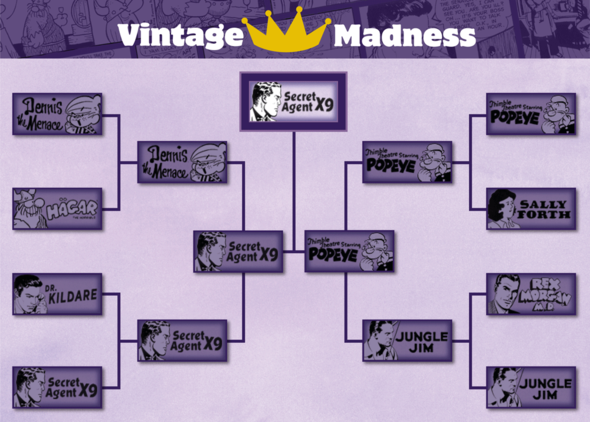 “Secret Agent X-9” beat “Thimble Theatre” by less than a dozen votes to secure a highly coveted spot in Comics Kingdom’s Vintage Comics section.  I actually wrote about the debut of “Secret Agent X-9” in one of my previous “Archivist” posts. Below is an excerpt from it, or you may read the full post here.

When “Secret Agent X-9” first appeared in newspapers, it was the third launch in a month for artist Alex Raymond who had just started “Flash Gordon” and “Jungle Jim” two weeks earlier. The comic was written by Dashiell Hammett, popular writer of crime potboilers in the 1920’s and 30’s who was best known for the character Sam Spade in “The Maltese Falcon” and crime-stopping couple Nick and Nora Charles in “The Thin Man” series. “Secret Agent X-9” would be an unusual character for him. Not only was he made specifically for a comic strip, he would be a government operative instead of a private eye.

It’s unknown whether he, in fact, had contributed much more than an outline and his name to this project; nevertheless, it constitutes among his very last new works. Hammett became unreliable early on, and had to be replaced as writer quickly. His name stopped appearing on it by mid-1935, when another master of the genre, Leslie Charteris, of “The Saint” fame, took over the writing tasks and got the credit also.

Raymond soon had to leave the feature as well, obviously his workload was immense. He stopped signing his work in late 1935, and was replaced by Charles Flanders (also unsigned). Eventually, many other men would draw “Secret Agent X-9,” including Nick Afonsky, Austin Briggs, Mel Graff and Al Williamson before it was discontinued February 10, 1996. However, after Charteris left in 1936, instead of using more big name, expensive authors, it was given to “Robert Storm,” which was a nom de plume for uncredited King Features ghostwriters, usually the prolific Elliott Caplin.

Here is a sneak peek at our newest vintage comic offering.

Thank you so much for voting and participating in our 2015 Vintage Madness. We hope you had as much fun as we did! We will be adding “Secret Agent X-9” to the Vintage Comics section in the coming weeks. Please continue to follow “Ask the Archivist,” and I will let you know when the comic will officially be available for your reading pleasure.