Ask the Archivist: HOORAY FOR BULLIES!

Today the Archivist would  like to say a few words of praise for a downtrodden underdog of the comic pages, those misunderstood, ostracized souls, the bullies.

For, where would so many great strips be without the actions of these necessary catalysts of comedy? Many strips have famous bullies, some not so much, but whenever they are seen, the results are beneficial in the end to the story and the reader. The bully’s useful service to the tale at hand is to provide an instant archetype who will engage in a familiar course of action and a contrast to others, id est, the “good” characters in the strip, imparting a lesson in proper conduct. That bullies often engage in subversive or violent acts, also offers a guilt-free laugh at the expense of those distressed “good” types. Nobody cries for Dagwood when Dithers clocks him with a typewriter or stuffs a pool cue down his throat, after all.

So here’s to the Bullies that have enriched our cartoons all these years. May they never stop beating up their wimpy counterparts!

Here’s a rogue’s gallery of some bullies, significant, and also not so much…. 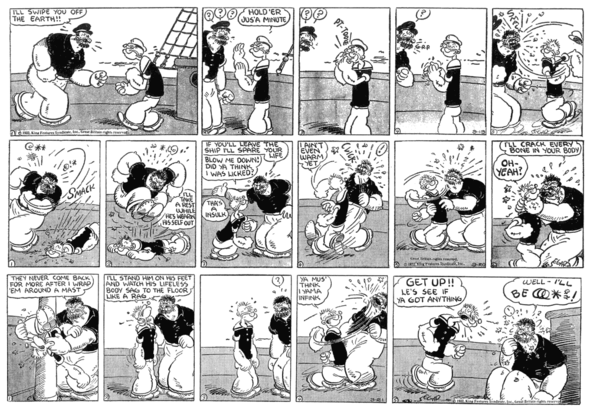 BLUTO/BRUTUS WAS ONLY A MINOR PART OF THE POPEYE SAGA WHEN SEGAR PUT HIM IN A SINGLE STORY IN 1932, (ABOVE), BUT BY INCLUSION IN THE ANIMATED CARTOONS, HE BECAME THE MOST WELL-LOVED BULLY OF THEM ALL, AND LATER, A MAINSTAY OF THE STRIP SINCE THE 1960s. 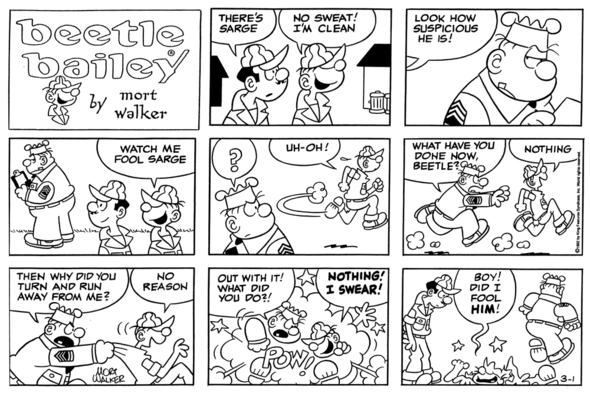 ANOTHER WEIRDLY SYMBIOTIC RELATIONSHIP IS SARGE TO BEETLE BAILEY. HE NEEDS TO ACT OUT VIOLENTLY AS MUCH AS BEETLE NEEDS TO DEFY HIM, USUALLY ENDING IN A BEATING SO SEVERE AS TO LEAVE HIM IN AN UNHUMAN, AMORPHOUS HEAP.

HENRY, LIKE MOST "GOOD LITTLE BOY" STRIPS, HAD A BULLY, OFTEN NAMED BUTCH, ALTHOUGH HE WAS A MORE IMPORTANT COMPONENT OF THE COMIC BOOKS THAN THE STRIP.  AND, NO,  THE CARTOONIST,  JOHN TRACHTE, WASN'T  A STUDENT OF EDVARD MUNCH, THIS IS FROM AN ORIGINAL BLACK PLATE PRINTER’S PROOF, AND THE EMPTY SPACES HAVE BEEN FILLED IN BEFORE THE FINAL VERSION WAS PROCESSED. 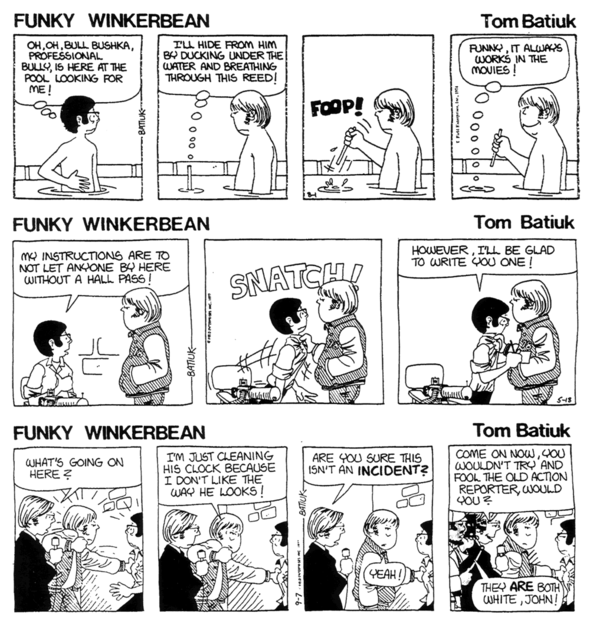 IN THE EARLY YEARS OF FUNKY WINKERBEAN, LES MOORE HAD HIS OWN BETE NOIR IN THE FORM OF BILL BUSHKA, “PROFESSIONAL BULLY.” IT”S NICE WHEN YOU CAN GET PAID FOR SOMETHING YOU LIKE TO DO.

See the first Funky strip at 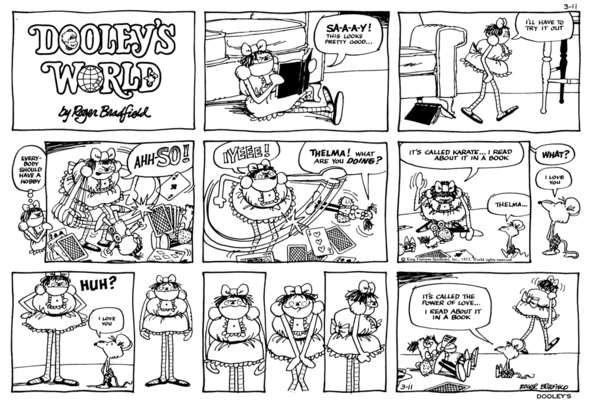 NOT ALL BULLIES ARE MALE;  THELMA, THE RAG DOLL OF DOOLEY’S WORLD, COULD ALWAYS BE SEEN TRYING TO MAKE HER COHORTS MISERABLE. WHAT’S THE FEMININE OF BULLY? A BULLYETTE?  A COWY? THERE’S PROBABLY A GOOD FRENCH WORD FOR IT SOMEWHERE.

MAYBE THE ULTIMATE, PUREST OUTRIGHT SUPERBULLY EVER IN STRIPS WAS THE MONSTER SIZED “SHERMAN” OF THE OBSCURE STRIP “VERSUS” BY JACK WOHL.  HIS ENTIRE EXISTENCE WAS DEVOTED TO PICKING ON POOR, TINY ARTHUR. SEE MORE AT:

Moving on to comments:

Little Iodine, like most characters, changed through the years. It’s a subtle metamorphosis, not discernible until you look back to the earlier artwork.  The feature was only three years old in 1946, and lasted into the 1980s.

I haven’t seen the “Ace Drummond” serial, but I’ve seen many others. Comics were a natural for movies, and the adventure continuities were often adapted for serials, including many other KFS series, such as Jungle Jim, King Of The Royal Mounted, Mandrake, Secret Agent X-9, Tim Tyler’s Luck, and, of course, Flash Gordon.

The problem with the old serials is how they are often presented now. When they were new, they were a once-a-week draw for the local movie theater, usually a Saturday morning show for the kiddies. By the  time television came around, the serials and the neighborhood houses were a waning phenomenon, but the old serials were brought back for Saturday morning televiewers. These were soon replaced by an ever-growing amount of made-for-TV products, and most of the old Hollywood serials were retired for good by the 1960s, and left only for collectors to care about.

Now, however, some serials are available on tape or disc, and inevitably, the urge to show all of them at one sitting arises, and it’s just not the way they were intended to be seen.   You will very soon notice repetitions like the song in "Ace Drummond," or recycled footage from earlier chapters or even other serials popping up.

See the next exciting chapter of The Archivist here next week.