Ever heard of a movie going missing?  One would think that with all the money and time put into the creation of Hollywood films, with all the effort it takes at every step of the way, with all those people putting their labors into each project, it would make sense to protect the finished project for years to come because it would always be able to be re-released for further profits.

But over the years, thousands of films were thrown away, or just allowed to disintegrate to powder, and nobody cared. It would seem that this doesn’t apply just to ancient, forgotten silent relics either.  Even movies of far more recent vintage and high popularity can suffer from various neglect or willful destruction.  For instance, the famous comedy epic "It’s A Mad, Mad, Mad, Mad World" (1963) is now only seen in a shortened re-release version. Where are the missing reels with the Buster Keaton and Three Stooges sub-plot footage? Lost.

The lost film I want to take up with you today is one based on a beloved old King Features character, Jimmy Hatlo’s  Little Iodine. It was filmed in 1946, and starred child actress Jo Ann Marlowe (1935-91), who never really achieved stardom, retiring at fourteen. Her parents were played by prolific character actor Hobart Cavanaugh and Irene Ryan, the  future “Beverly Hillbillies” star.

This film was released in October 1946, supposedly delayed by a few weeks to prevent many children gathering at movie houses during a severe polio outbreak. It seemed to have done a very mediocre box office business, and was never revived, even when television broadcasting began in earnest only about two years later, and began to reveal a voracious appetite for as many movies as could be found.

It apparently just went back to the vaults of the producer, former star Buddy Rogers, married to Mary Pickford, co-owner of the studio that released  the Iodine epic, United Artists.  Mary was very serious about maintaining her films, but apparently no interest in preserving hubby Buddy’s efforts.

Since the film is not able to be seen, all we have to look at are some stills and promotion. See a photo from it at
http://comicskingdom.com/blog/2012/04/25/ask-the-archivist-gets-graphical-and-answers-reader-email

Now if you care to peruse it, the Press Kit, or” Press Book” for Little Iodine. These would be sent to an exhibitor in advance of his showing a film. It shows the exploitation materials like posters, lobby cards, newspaper cuts and ready-made advertising disguised as news items or reviews. 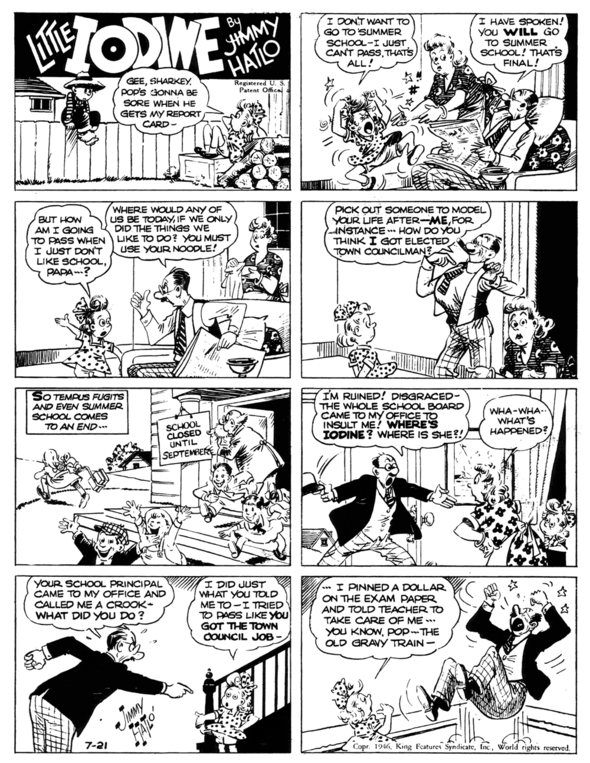 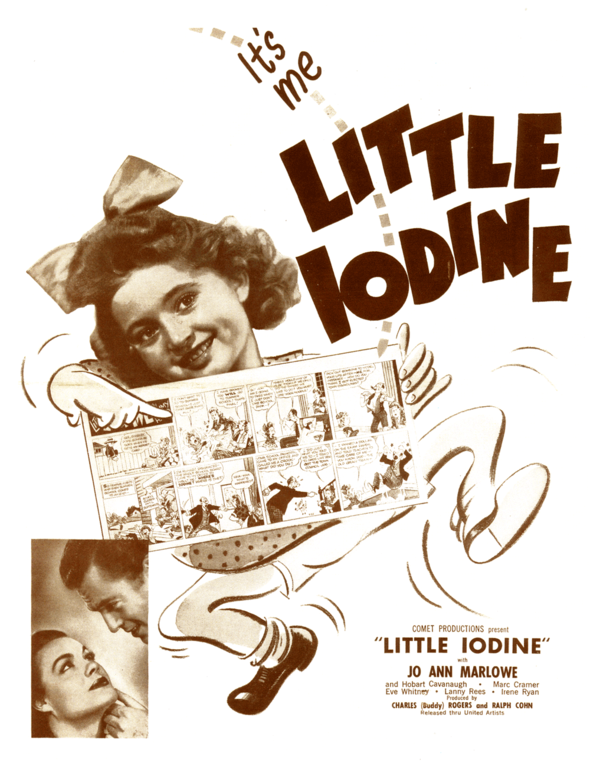 LITTLE IODINE’S PRESS KIT IS A REPLICA OF THE ONE-SHEET POSTER. THE STRIP SHOWN IS THAT OF 21 JULY 1946 (above). 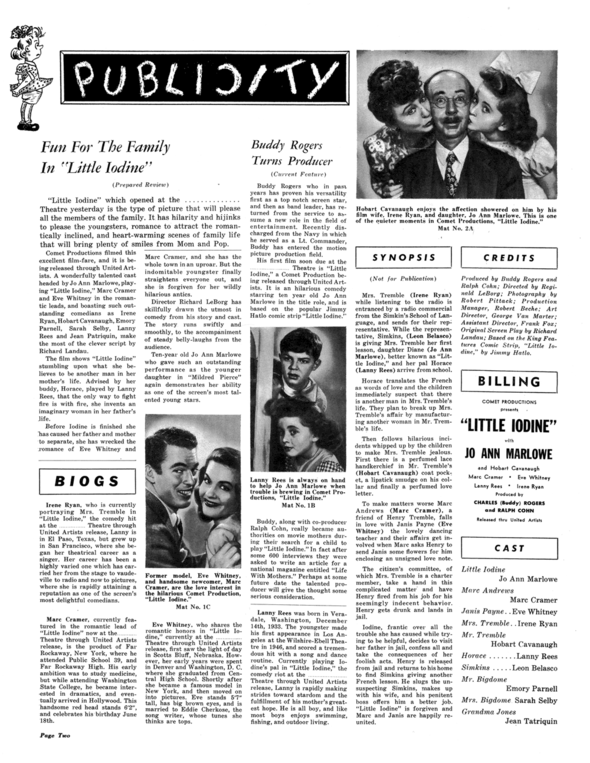 FOR SOME REASON, THE HOLLYWOOD VERSION OF THE TREMBLECHINS HAD THE SURNAME SHORTENED TO “TREMBLE.” 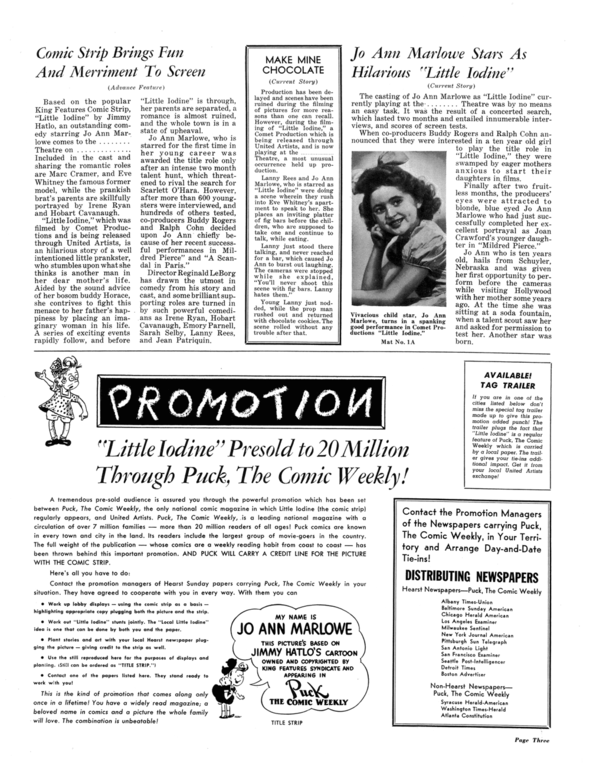 A TIE-IN WITH PUCK DIDN’T HELP THE FEATURE. THERE’S NO TRACE OF THE TRAILER EXTANT, EITHER. 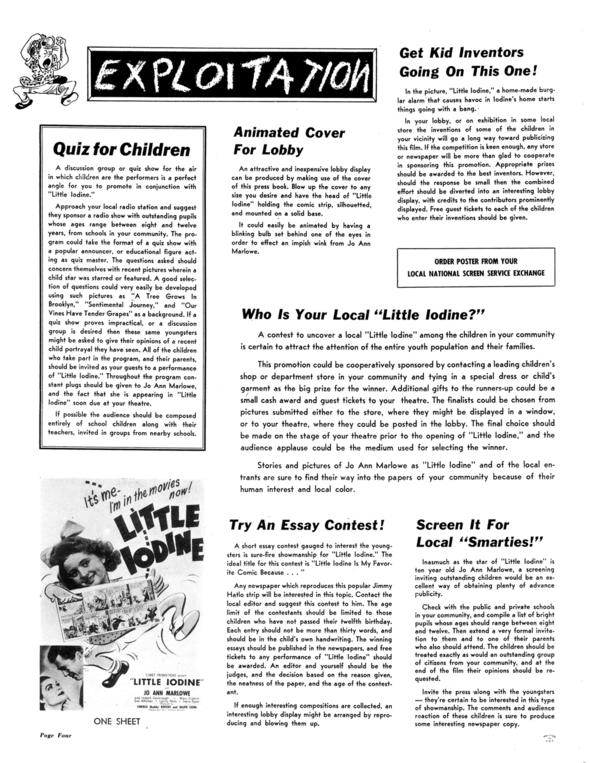 PRESS BOOKS ARE NOTORIOUS FOR SUGGESTING UNREASONABLE CONTESTS AND PUBLICITY INCIDENTS NO ONE EVER FOLLOWED THROUGH ON. 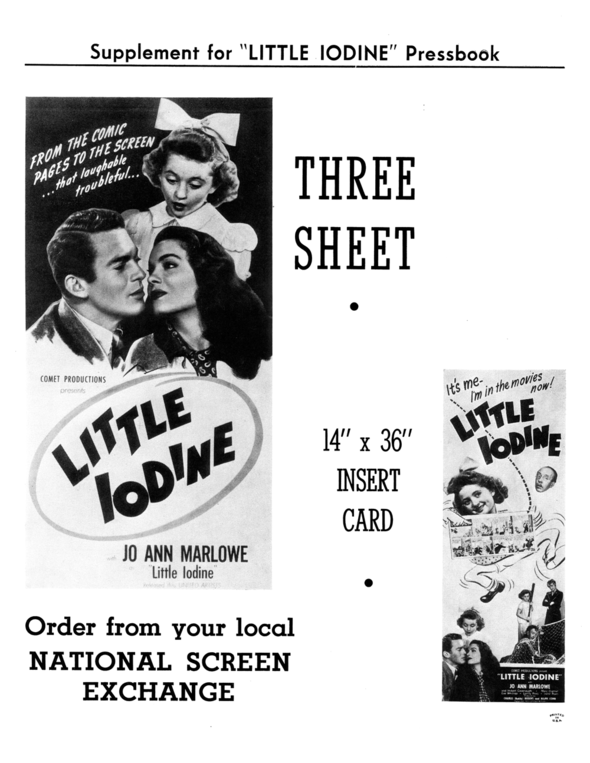 A “THREE SHEET” IS A HUGE POSTER COMPRISED OF THREE STANDARD “ONE-SHEET” SIZED COMPONENTS.  AN “INSERT CARD” IS ACTUALLY A LONG, SKINNY POSTER IN THE MEASURMENTS STATED. AT ONE TIME, ONE WOULD BE ATTACHED TO THE EDGE OF A BILLBOARD SIZED POSTER , A “SIXTEEN SHEET.”

I bring up this forgotten flick today to mark the end of something that your correspondent has done for many years each month of March. No, it’s not some weird Druid Spring Tide Bacchanalia; it’s the annual Cinefest in Syracuse, New York. Here I’ve been treated to showings of the rarest of rare Hollywood films. It was founded by a great ol- time film buff, Phil Serling (1932-2002). Many years, we had use of a great old movie palace as well. It was a great party every year, getting together with old friends and fellow Cinephiles.

But, it comes to an end next week after 35 years. Expenses for everything rise steadily, and technology pushes out such oldfangled contraptions as movie projectors.

If you find yourself in Syracuse this week, drop in, just to see the memorabilia dealers, if for nothing else. You might find something useful like the Iodine press kit.

And now, to respond to comments from last week's blog post:

Bizzy Bee/Buzz Buzz has had a strange relationship with our blog, a sort of a phantom cast member of the Barney-Snuffy strip. I'm sure we'll see even more of her sometime soon, because against all odds, something new to talk about her keeps turning up.