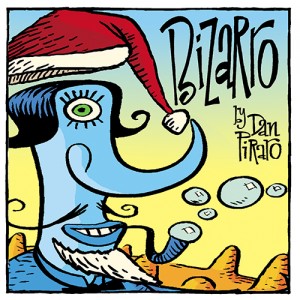 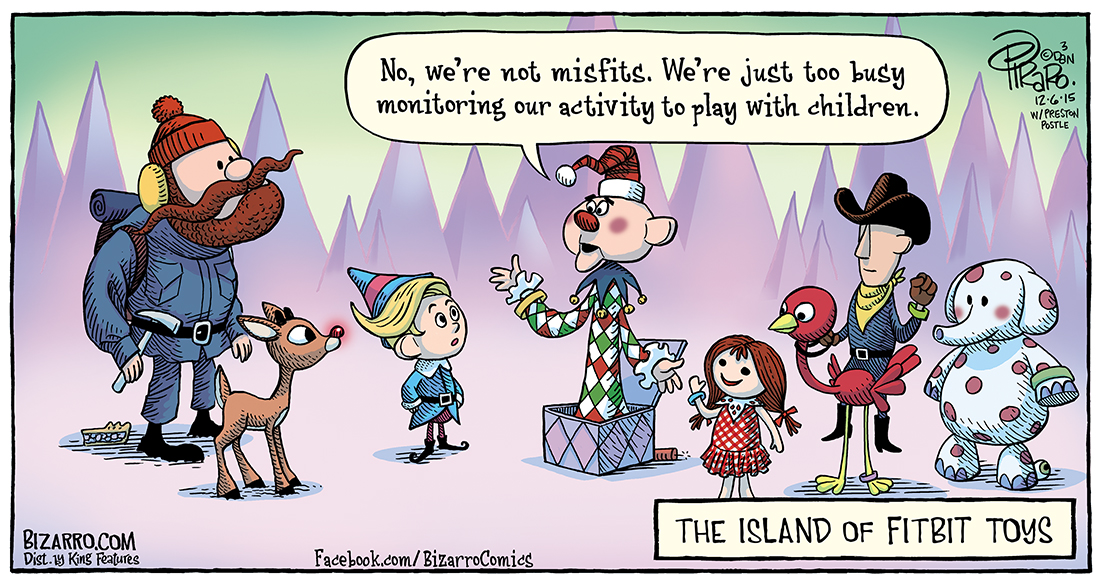 Bizarro is brought to you today by Bizarro Nativity Scene 2011. I have an OCD issue with music. At almost all times when I am awake, a song is playing in my head and it drives me nuts. So drawing this cartoon (and typing this post about it) is a painful experience because I cannot stop that horrible song about the Island of Misfit Toys from playing on a loop. All I have to do is look at this picture and I hear the music. Unfortunately, looking away from the picture does not make it stop. Accordingly, I have no tolerance for any of those Xmas TV specials I grew up with; they haunt me. If you've no idea what this cartoon refers to, it's a satire of the ancient classic Christmas TV show, "Rudolph the Red-Nosed Reindeer".  Oh, and "fitbit" is some kind of electronic bracelet that tells you things about your health or something. I hear they're very popular. 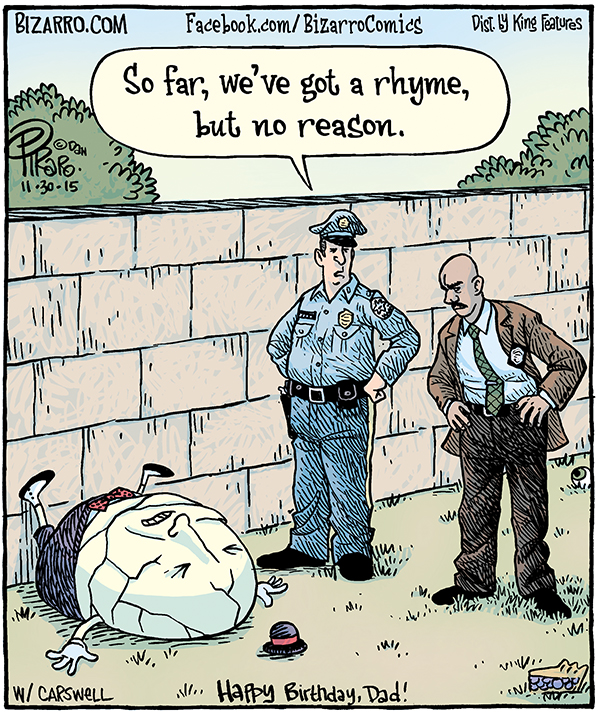 This cartoon has nothing to do with Xmas other than it also features a joke about a fairy tale. If, like me, you're not into the whole holiday thing, you might enjoy this Bizarro cartoon from Xmas past.

I'd love to do this with a hidden camera at a fancy-schmancy restaurant. But I probably never will.

Very few people realize how good German Shepherds are at disguises. I used to have one that looked just like a Papillon. (Which means "butterfly" in French but is also the name of a ridiculous breed of lap dog.) I named him "Steve" because Steve McQueen starred in a film of the same name, which had nothing to do with dogs.

And the name of the room is...

If you don't follow politics you may not be aware that one of the Republican frontrunners for president is a former brain surgeon named Ben Carson who is famous for knowing very little about anything other than brain surgery. He thinks the pyramids were built by Joseph, a character in the Old Testament, to store grain in spite of the fact that this is not and could not possibly have been remotely true. Upon being corrected, he insisted that it was a matter of opinion and that his had not changed. He also believes the Bible is the literal word of the one true god, and an infallible source of history. And there are people who want him to lead the most powerful nation on earth. Have we learned nothing from history about the effectiveness of religion as a political platform? (Crusades, Northern Ireland, Israel, the entire Middle East, ISIS, etc.)

This cartoon about Colonel Sanders confused some folks so here's the secret: pronounce "jolonel" the way you would "colonel". This dandy bit of wordplay about the colonel and his infolonel jolonel comes from the left frontal lobe of my longtime good buddy, Cliff Harris, known to Jazz Pickles as The King Of Wordplay.  A few months ago I told you about the opportunity to get your name in his new book of wordplay jokes, "But I Hardly Even Know Her," by supporting his Kickstarter campaign. I'm pleased to report that he reached his goal, thanks to the generosity of Jazz Pickles around the world, and the book is now in print!  You can order a copy through Amazon:

Also, check out Cliff's website, where you can learn more about the book and even get a chance to have your joke included in volume two!

Also also, here's a great place to get a unique Bizarro gift for yourself or someone special. Super-nice, signed, limited-edition prints of some of my favorite cartoons from a gallery in LA. You (or that other person) will love it!

Have a good week, Jazz Pickles! See you soon!