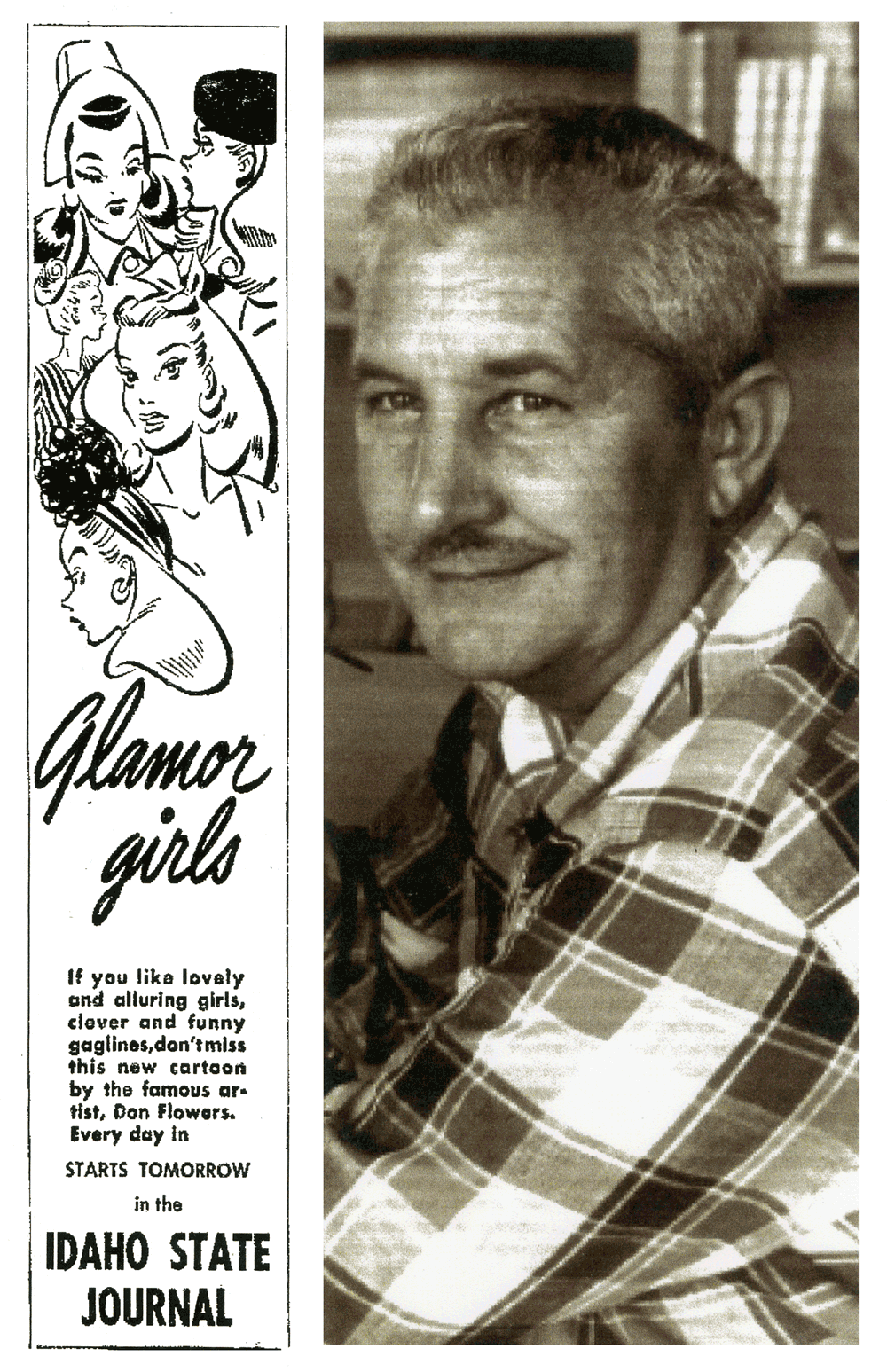 Today we’ll see some samples of the last of the class of 1945 titles, Glamor Girls by Don Flowers. 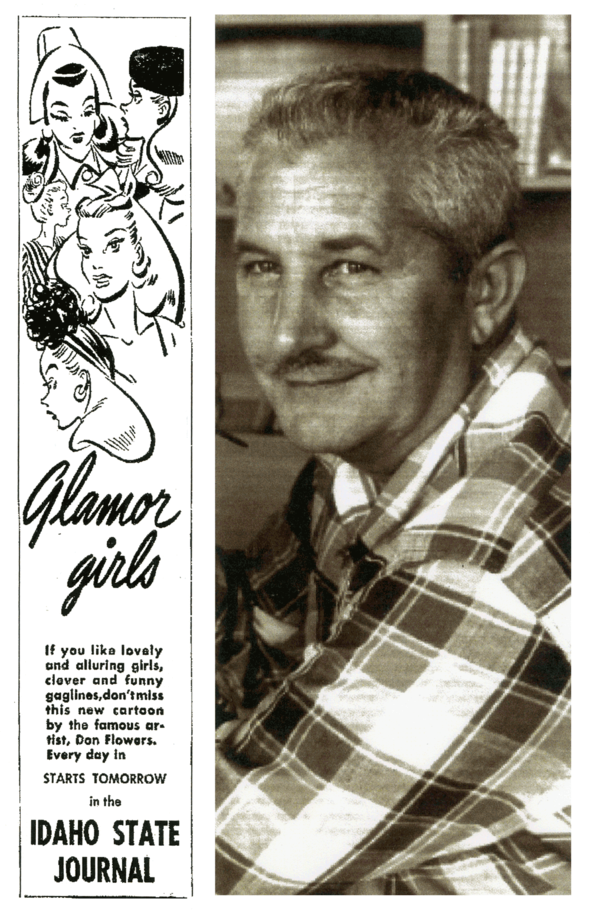 Flowers was famous for many years as a great delineator of shapely, gorgeous girls. There were a number of them in the syndicated cartoon world, Russell Paterson, E. Simms Campbell and Jefferson Machamer, to name three.  His first widely seen work was when he contributed to the new Associated Press syndicate, where he created a comedy continuity  series called Oh Diana! and a gag panel, Modest Maidens, in the spring of 1930.

Despite the AP’s huge presence in the news reporting world, and having talented men that at one time included Al Capp and Milton Caniff  in their comics syndicate, AP Newsfeatures never really took off. They only existed for about thirty years.  With so much access to so many papers by way of their news wire, you’d think they might have done better with the cartoons, but I’m guessing they charged too much. After all, if you’re going to pay more for comics, you might as well get strips that had a lot more popularity.

As for the artists, they were at the same time being vastly underpaid. That’s likely why Terry and the Pirates and Lil’ Abner were not AP titles. King Features lured Flowers away by offering him twice his salary to do a newly retitled version of the same panel for us, according to his son, Don Flowers Jr.

The new KFS panel was called Glamor Girls,  a non-charactered series showing pretty girls in humorous situations. It debuted on 22 October 1945 and lasted until 3 February 1968.  The Sunday version lasted from 18 November 1945 to 31 December 1967. Look-- here come some now... 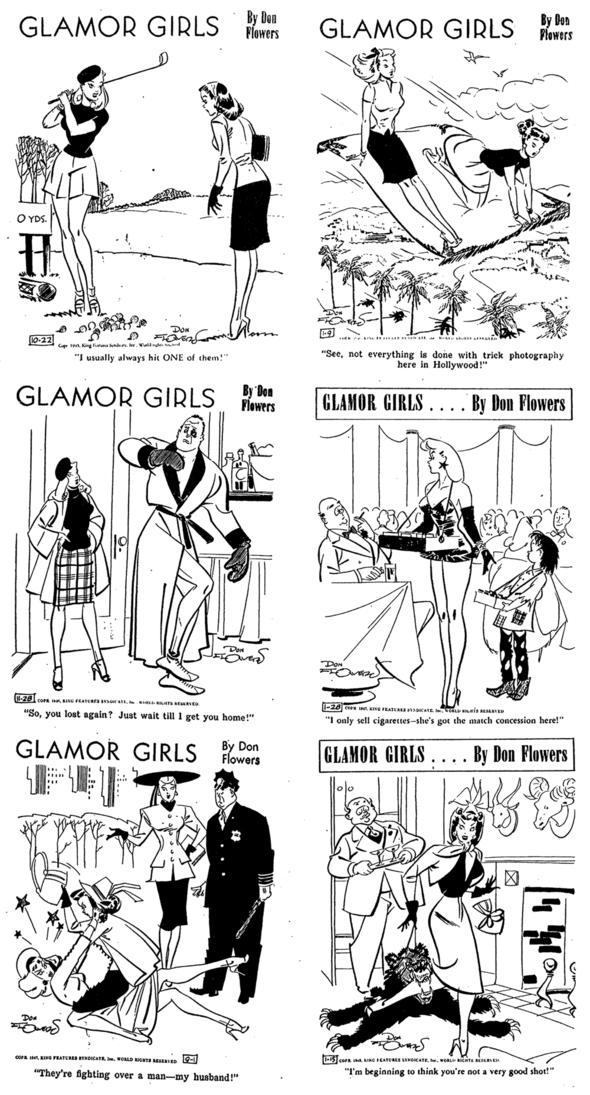 Glamor Girls Sunday 1951. You can tell straight away if a gag was a Sunday or a daily,
as Flowers only used word balloons on Sunday. 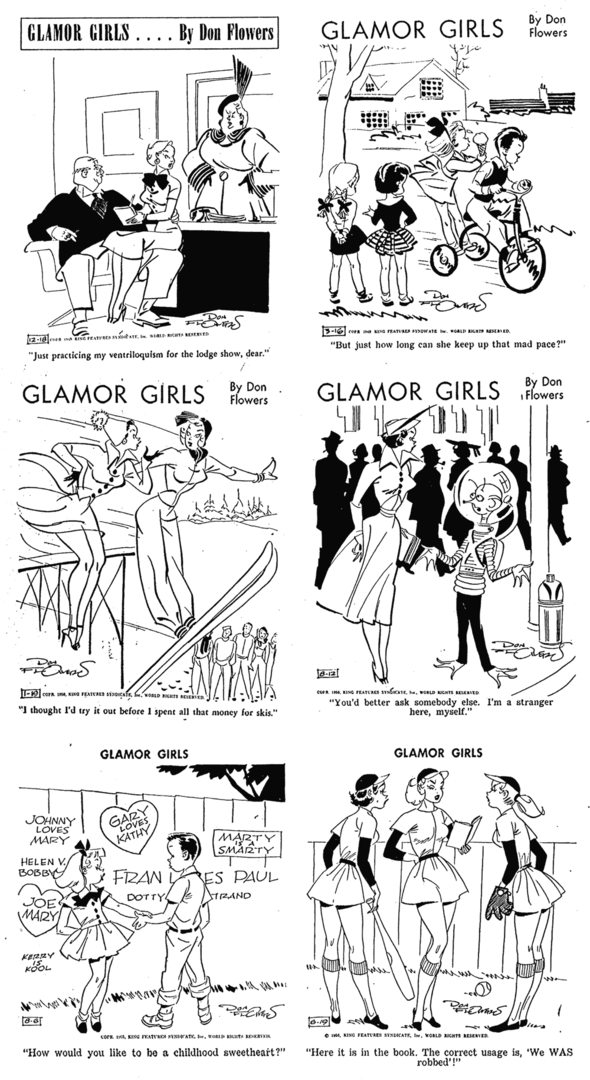 Flowers had favorite situations and types of subjects, show girls, secretaries and shop girls offering the most inspiration for his gags.  Situations like nightclub table incidents or  marriage proposals were constantly seen.  At first, there’s no difference between Glamor Girls and Modest Maidens, but as time went on, his style became a lot looser and increasingly cartoony, with more family and kid gags. 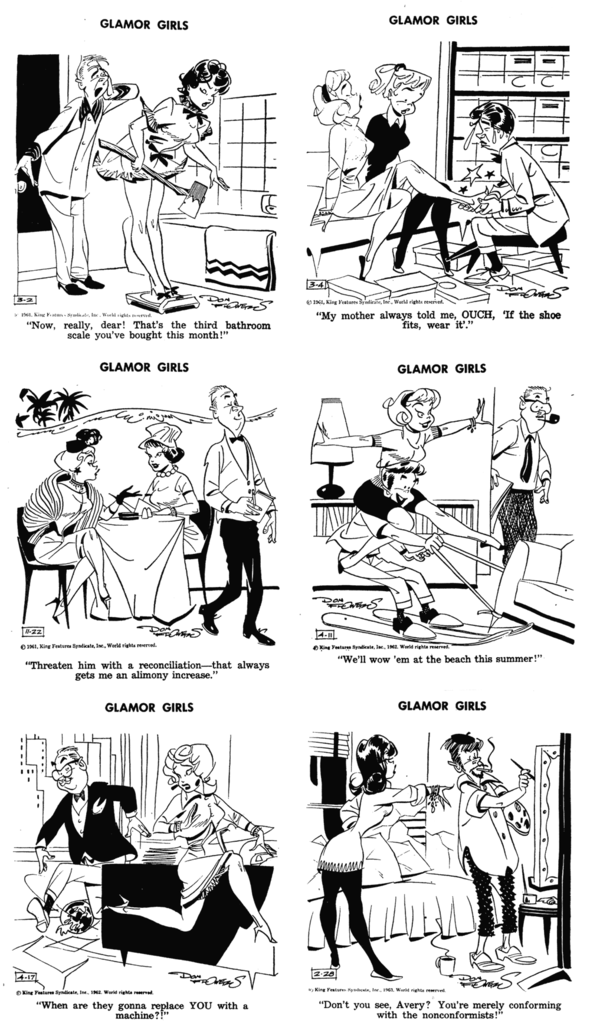 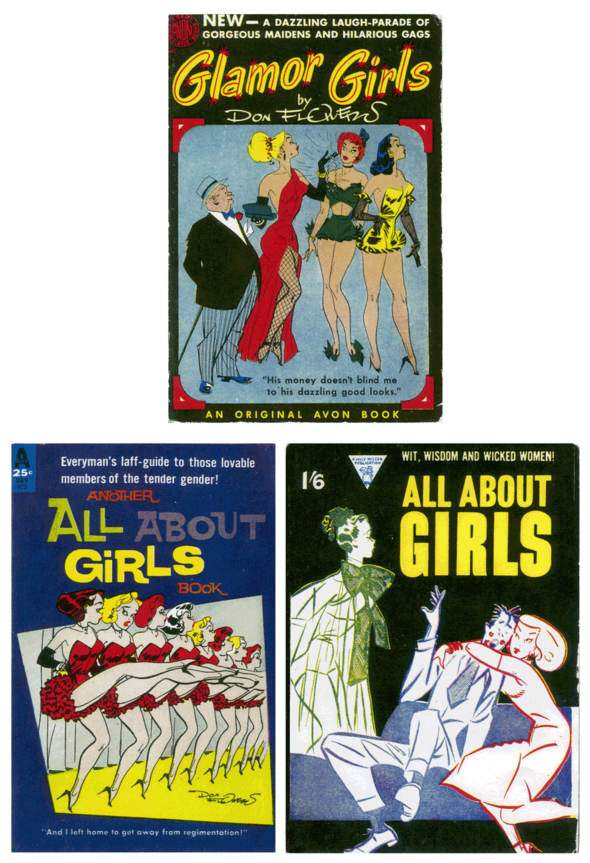 Avon paperback collection of Glamour Girls, 1952. And two “All About Girls” editions with Glamor Girls covers. That was a series that compiled various cartoons from Cuties, Glamor Girls, Laff-a-Day,
Sally’s Sallies, and Susie Q. Smith, along with short stories by Bugs Baer, Dorothy Kilgallen,
J. P. Medbury, Damon Runyon, etc., all on the the topic of girls. The second book here is from 1960.
The third cover is a 1949 British printing by Miller & Sons, London.

Today, Don Flowers still has many fans, several web sites celebrate his work, and a lot of his original art is for sale from different dealers.

I guess it’s always been a comics tradition that the star, no matter what an oaf he might be, can have a glamourous wife. As most cartoonists are men, it’s more appealing to have (and draw) good-looking gals than a bunch of less attractive women, who might more likely be a match for a Hubert in real life. Over the years, he changed dramatically, and I’ll do something later this year about that.

Tex Thorne was a short-lived series. There weren’t a lot of cowboy strips until the age of TV, when series based on real-life western actors like Hopalong Cassidy and Roy Rogers came out. I don’t think Zane Gray had anything much to do with the strip except lend his name to it.

Hubert was recycled after the series ended, deposited in our “Weekly Service” category that usually supplied small-town weeklies. Sure, the 1947 copyright’s still in force. Just to make sure, some older features were regularly inserted in the Weekly Service to show proof of use for the trade mark.  Ol’ Hubert is still very much in copyright, don’t worry.

We put some Apt. 3-Gs in the Vintage section last month after the strip ended in syndication. I only wish we had more extensive files than we do.

Steve Canyon was created especially by Mr. Caniff so he could own his own work. His status was as a top cartoonist in 1947, when he quit the Chicago Tribune syndicate where he did Terry and the Pirates. His new venture was guaranteed to be a hit. He signed with the Field Syndicate, but we got in on the actual newspaper sales. To make a long story short, King Features never had the rights to it.