Cartoonists are, at their core, storytellers. Comics are such a seminal part of early literacy for so many people. The combination of pictures, that are often a universal language all their own, and words that we're just learning, discovering a new language is a very special kind of literary experience for children and adults alike.

It's so exciting to be living in a time in which comics are regarded as a form of literature in their own right by many more people, especially when comics are included in conversations about important and influential books.

For today, I asked our cartoonists to talk about some books that are important to them -- either old favorites or books they read recently that struck a particular chord with them.

I’ve always loved comic books. I think my favorites when I was a kid were the Carl Barks Donald Duck and Little Lulu. I kept all my comics in a big box I kept under the bed in the trailer we lived in. The trailer was 25 feet long and there wasn’t much space. I remember the day when I came home from school got under the bad, and MY COMICS WERE GONE! I asked my old man where my comics were. He said he didn’t know. The same thing happened when my pet hamsters disappeared.

I’ve been meaning to read the comic book, Bone by Jeff Smith, for donkey’s years. Shortly after moving to Hondarribia, I found a Spanish copy in a market. I didn’t understand all of it, but enough to find it really funny. And it is well drawn in any language.

Meanwhile, in Dingburg, e-books are turned back at the border.

Being a horse lover and a once in a while cowboy one of my favorite books is "The Faraway Horses" by Buck Branaman. If anyone remembers the Robert Redford movies "The Horse Whisperer" you will have seen a glimpse of natural horsemanship. The movie was based on a book. The book was based on Buck Branaman.

"The Faraway Horses" is an autobiography by Buck Branaman. The book does touch, in detail, on Buck's remarkable affinity with horses but also his ability to have overcome a harsh and difficult childhood. It's one man's story and a good one at that.

The first book that comes to mind is The World According to Garp by John Irving. It is the book that set me seriously thinking about becoming a father, which subsequently, resulted in Baby Blues. Another Irving book, A Prayer for Owen Meany, is another of my favorites. Still, To Kill a Mockingbird is on my all-time favorites.

Others that were important or influential to me at particular times in my youth and young adulthood:

The Martian Chronicles and The Machineries of Joy by Ray Bradbury (or anything of his up through the 60s)
Planet of the Apes by Pierre Boulle (much different than the movies)
Slaughterhouse-Five by Kurt Vonnegut
A Clockwork Orange by Anthony Burgess,
A Brave New World Revisited by Aldous Huxley
All The President’s Men by Woodward and Bernstein
Don Martin Bounces Back by Don Martin
Help! I’m a Prisoner in a Chinese Bakery by Alan King (a standup comedian—think 60s version of Lewis Black)
and The Right Stuff by Tom Wolfe (who of my generation didn’t want to be an astronaut at some point?).

Stephen King’s 11/22/63 (much earlier, I loved his first version of The Stand)
The Time Traveler’s Wife by Audrey Niffenegger
The Amazing Adventures of Kavalier & Clay by Michael Chabon
The Kite Runner by Khaled Hosseini (“enjoyed” may not be the right word for it, but a terrific book)
A Time To Kill by John Grisham
Dennis LeHane’s Mystic River
and my new favorite contemporary suspense writer, Tana French (anything by her about the Dublin Murder Squad)

This has become way too big a list. I could go on….

This has always been one of my favorite early Ketchams and this is certainly the right opportunity to use it. 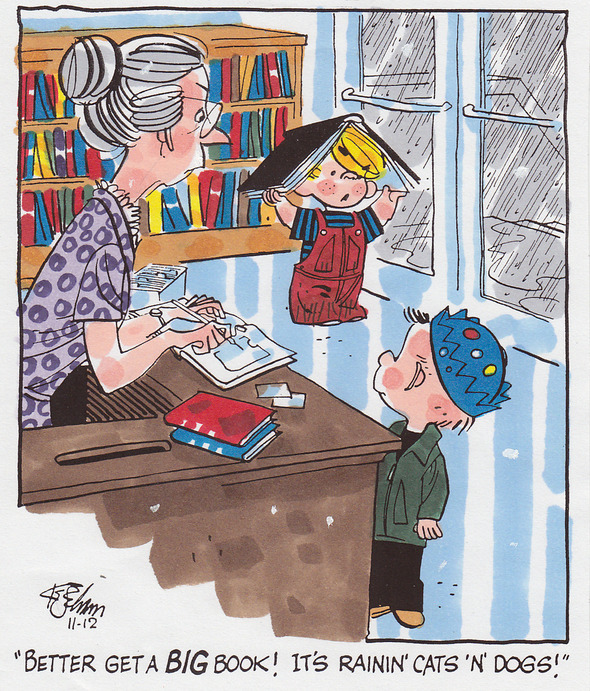 I read a lot of non-fiction books and articles for my strip. One thought-provoking book that I read recently was “Overwhelmed: Work, Love, and Play When No One Has Time” by Brigid Schulte. It was a good follow-up to a similar book, “Perfect Madness,” which I read in 2004. There was a lot of material that inspired some deeper (but hopefully still funny) gags.

A wise editor/friend of mine once told me it was important to read both in and outside of my professional interests. In those days I was a young editorial cartoonist trying to get up to speed in the journalism world, and most of my reading was newspapers and news magazines and my imagination was drying up. I adopted the habit of always having at least one non-fiction book and one novel going at the same time. They have a way of cross-pollinating in helpful ways.

Right now I’m reading Satchel by Larry Tye, a fine biography about the legendary pitcher who’s been unfairly reduced to a caricature by myth and lore. And I’m in withdrawal after finishing Kent Haruf’s awesome two-book set Plainsong and Eventide, about the folks who inhabit the fictional town of Holt, Colorado. 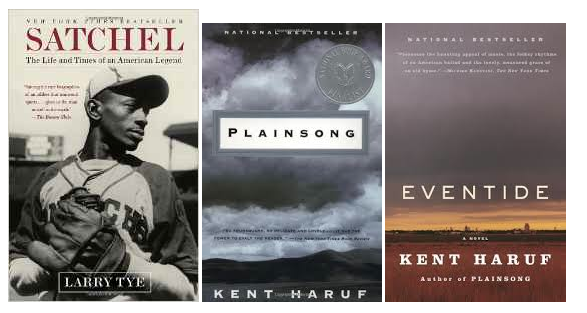