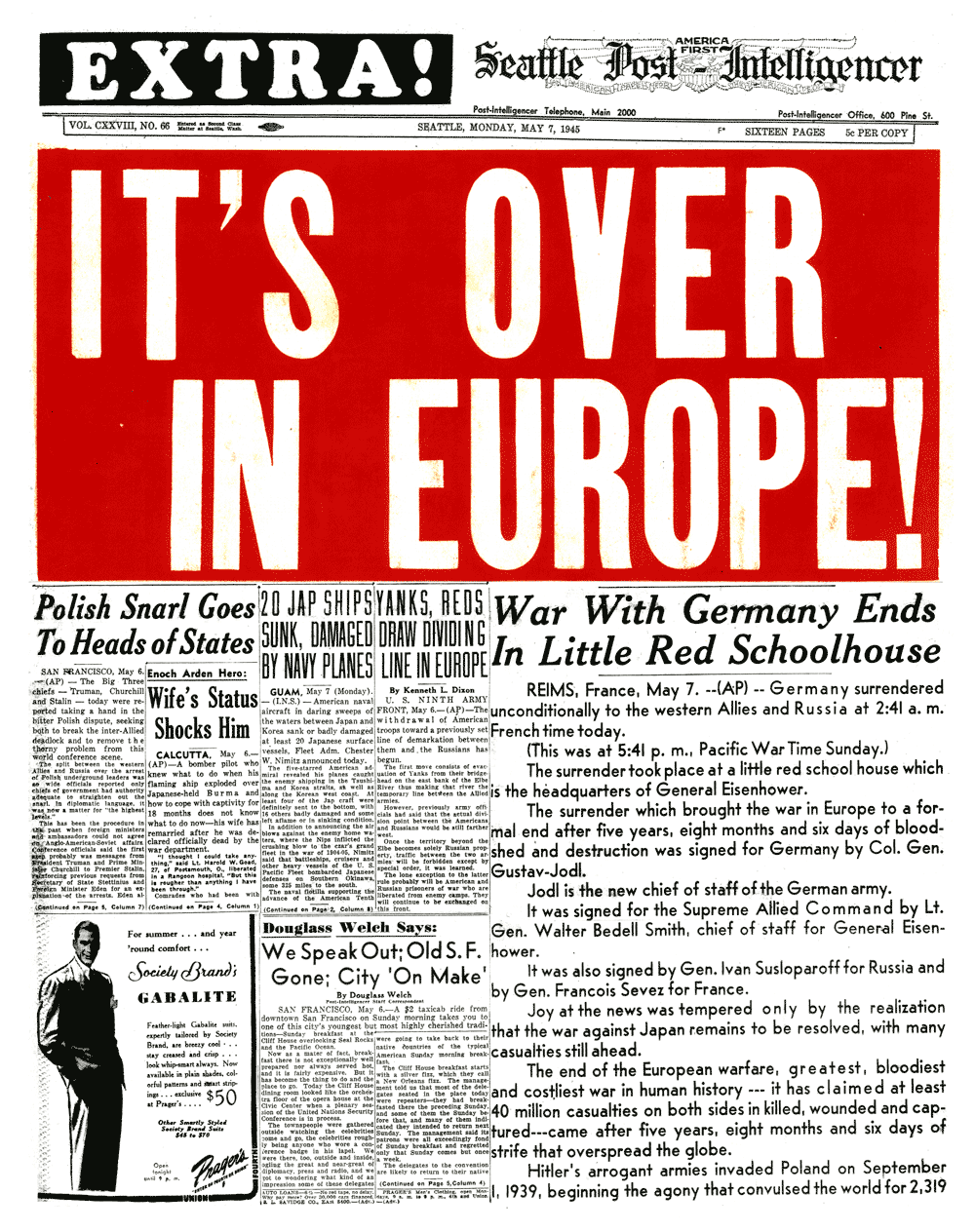 It was 70 years ago today that Germany was finally defeated by the Allied powers. The worst mankind could offer was crushed after five-and-a-half years of bloodshed, destruction and horror. The Victory celebrations started as the surrender documents were signed, but the next day was the official “V-E” (Victory in Europe) Day. Some of the comics from that heroic day are presented here. 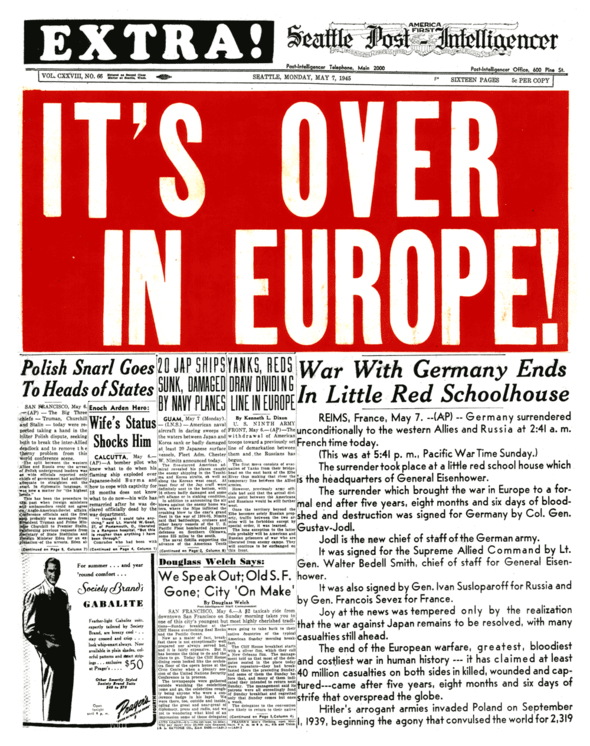 VE Day Breaking News
Hearst newspaper breaking the VE day news. The official announcement hadn’t been made, and Associated Press reporter Ed Kennedy had got the story on the wire, against orders, beating out other news agencies like United Press and our own International News service. AP was then barred from any further dispatches for the next twenty-four hours, and later just Kennedy himself by Supreme Headquarters, but he  scooped the world. 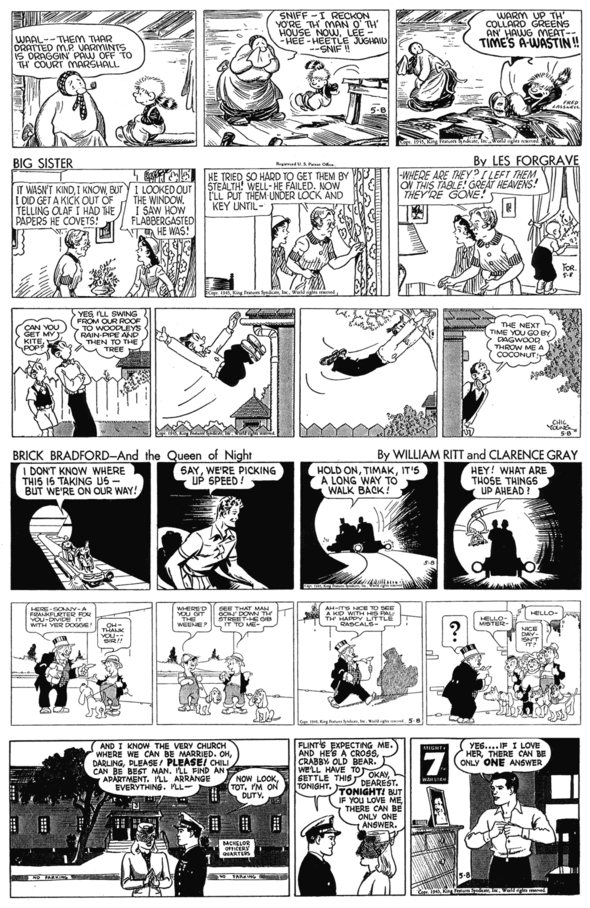 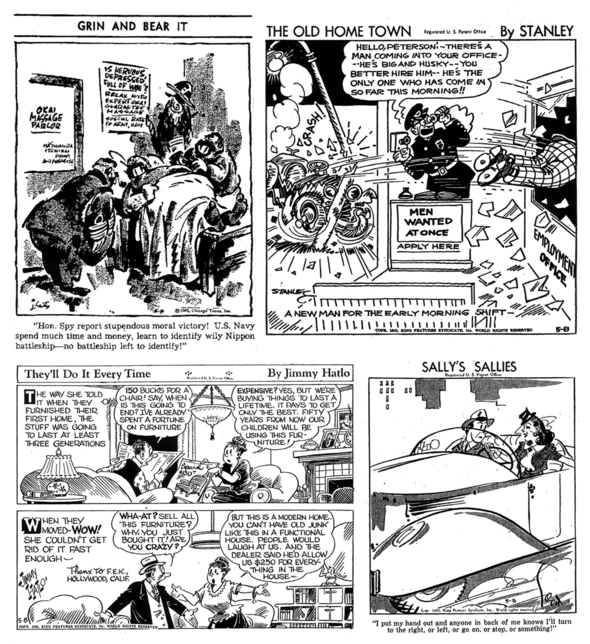 VE DAY Comics:  GRIN AND BEAR IT by George Lichty, OLD HOME TOWN by Lee Stanley, THEY’LL DO IT EVERY TIME by Jimmy Hatlo, SALLY’S SALLIES by R. J. Scott.

Grin and Bear it was a Chicago Times Syndicate panel then, but many syndicates later, it’s one of the NAS lineup now. 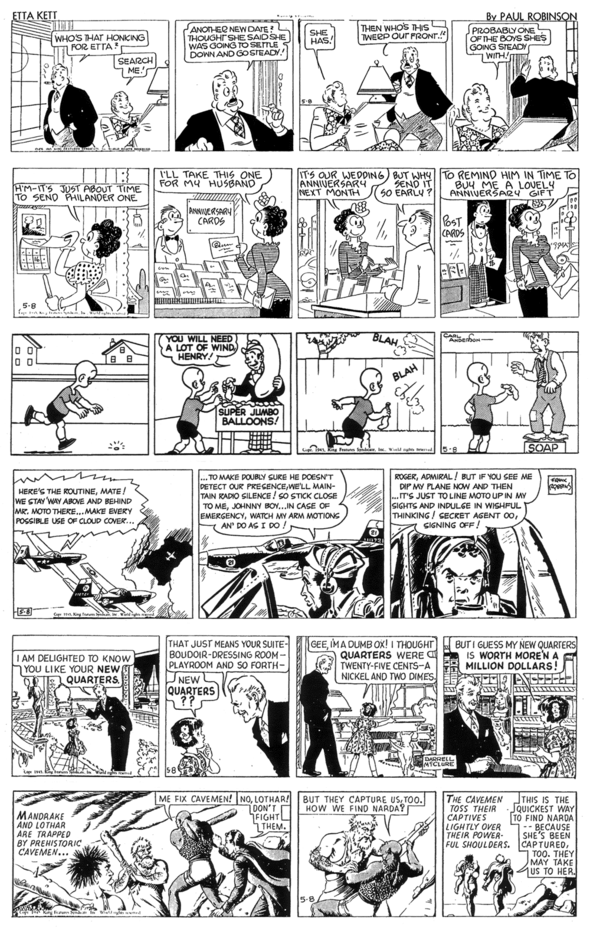 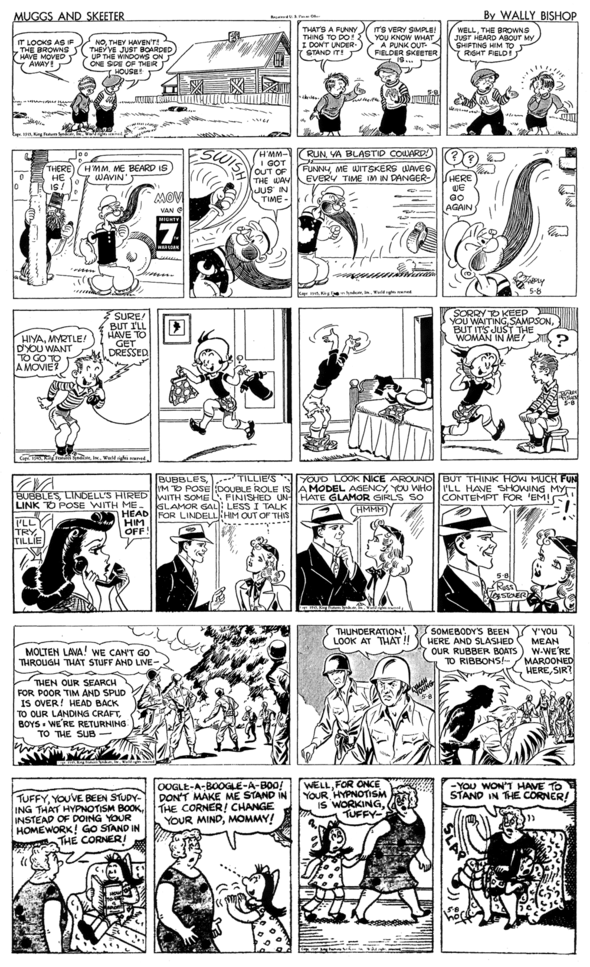 Note the small insert in the BUZ SAWYER and the POPEYE strips, a promotion for the Seventh War Loan, one in a war-long series of huge campaigns to get civilians to purchase more war bonds and stamps. A sheet of small stickers bearing the logo of the loan would be given to cartoonists, just like with Christmas seals, and they would insert them in random spaces in the original art during the sale period. 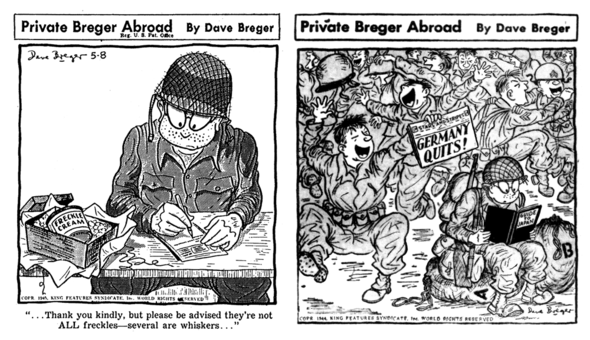 PRIVATE BREGER ABROAD was Dave Breger’s comic misadventures of a young citizen soldier. I wrote a previous blog post on him HERE:

Here is the regular panel that appeared that day, and also a special that was offered to clients in advance of when the big day finally came. The gag isn’t so funny as it has a sobering point to it.  Though the Nazis had been at last destroyed at great cost, and one could celebrate like the soldiers in the background, relief for the fighting men would be temporary, for what looked like a many years long struggle in the pacific loomed for the same men who’d been through so much. Interesting to note, the special cartoon has a 1944 copyright, indicating that Breger, at least, had no doubts about our vanquishing the Germans.

Next week, starting on Monday, SECRET AGENT X-9, this year's Vintage Madness winner, will be added to the Vintage Comics section! We hope you like the newest addition to our comics archives!