Family Portraits is a series not often discussed in the same vein as Blondie or Flash Gordon, or almost any other strip, because strictly speaking, it wasn’t a strip.

It resembled a sketchbook page, several samples of what artist J. Norman Lynd (1878-1942)  could think up for a certain topic. Lynd was a great draftsman, and a keen observer of human types and facial expressions.

These sorts of cartoons had been around for a long time, for instance, in news publications, offering scenes of important people at an event, say a convention or a trial. They also were used for humor, especially in the earliest days of comics when there were more one-shot gags and topical pages than series or characters.

Lynd had been an illustrator of some fame, going from news and theatre sketches to magazine and advertising art. His best-remembered venture into syndication was Vignettes Of Life, a series he took over from Frank Godwin in 1927, which was done for the Ledger syndicate. 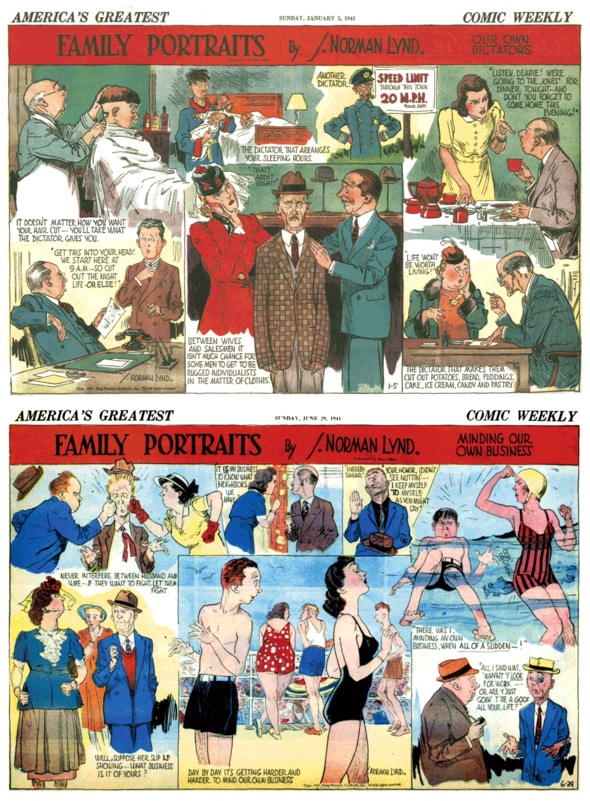 The Ledger was a syndicate that had good material and good artists -- Godwin was still there doing “Connie,”  for instance. But though it had quality offerings, it was poorly run and by the end of the 1930s, it was losing ground rapidly.

Fortunately, King Features was interested in Lynd and his feature, so in 1939, he joined our line up, and Family Portraits was born. It was basically the same feature as Vignettes had been. Unfortunately, Mr. Lynd only lived another three years.

Family Portraits was often seen in the Hearst “Puck” comic sections, but clients would use it much as “Vignettes” had been, put on the back of a Sunday magazine section or even in the women’s section. I guess since it had no recurring characters  and it was indeed not a strip, it was considered adult fare.

Themes of the feature had several gags built on the premise of a phrase or attitude. Like “You can get used to anything,” “Voices,” “How to be unpopular,” Keeping Cool,” etc. These would show people humorously overreacting to small slights and misunderstandings, or committing petty trespasses against etiquette or general decorum. 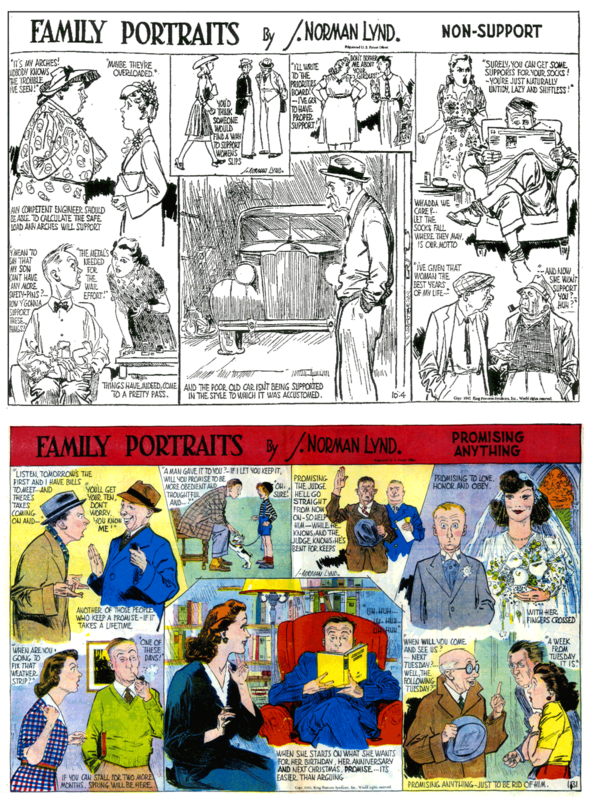 Thanks to the late Cole Johnson for the color scans.

We will show a lot of Secret Agent X-9, though the vicissitude of time has unfortunately left our archives less than complete, alas. There will be only a short period of the 1930’s series, then we’ll start in earnest about 1945. But from there we can keep going on into the 1990s.

We have a large library, but there are technical and sometimes legal considerations that must be deliberated also.

With Secret Agent X-9, there were a lot of different artists and writers over the years, and there can be many favorites.  Each of the men that contributed had their own distinct styles. Some were real stellar penman like Mel Graff and Al Williamson, so there’s something for everyone.

We really can’t put up that much more at a time.  There is already a variety of strips, and sadly, we can’t please everyone. I could pick titles that I like, but they might not reflect the majority of fans.  That’s what the March Madness venture is about -- what could be more fair than an election?  Readers picked over the list fair and square, and every vote counted down to the last hanging chad.  Next time, there’ll be several other possible contenders.

You are quite right, Mr. Emperor, it’s not a simple job to convert the proofs to scans and then separate them for this use. It’s a drawn-out and fairly extensive process. That’s why we conduct an election, for it’s always best to give people what they want.

Popeye is a great title, and there certainly are decades of material that have been unseen for years, but he just got outvoted. But there’s always a return match down the line...

Check out the next exciting chapter of The Archivist here next week.