Ask A Cartoonist: Your Best Strip Ever

One of the most interesting things about working at King Features is the long and storied history of comics that we're immersed in every day. So many of our cartoonists have been with us for decades and amassed a huge body of work. You may not know it, but a number of great KFS cartoonists got their start "ghosting" -- that means writing or drawing a strip under someone else's name-- before moving on to establish them with their own original work. But whether creating comics under their own name, or for one of our classic features, every cartoonist has a strip that epitomizes their proudest moment.

This week, I asked our cartoonists to talk about the best strip they've ever written or drawn, and how they were inspired to create it. Read their answers below!

Back in 1969 I was ghostwriting for both Mary Worth and Apt. 3-G. I was inspired to write this strip by a Mary Worth story I was working on at the time. Mary was living in a tenement apartment building in New York City. Her crazy neighbor Evita had accused her of trying to steal her husband Diego. Earlier Mary had coincidentally met Diego at a public cooking demonstration and they were seen talking together. When Evita got wind of it she had a loud, angry, profanity-laden confrontation with Mary which kept the other neighbors awake throughout the night.

I don’t know which story I enjoyed writing more…Mary and her crazy neighbor, or Lu Ann with a jealous Margo!

Here is the best strip I’ve ever drawn. It’s unfortunate that no one can see its finest parts. You see, I was so in the zone when drawing these three panels that I got completely carried away with it, and had forgotten to leave room for the speech balloons.

I had tried to get the strip to run without the dialog, but the writer wouldn’t have it. Apparently she had done her best work that day, too. (What are the chances?) In any case I had no choice but to run the strip as you see it today— with my best art work lying hidden beneath, well, someone else’s best work.

So, because of those fat ugly speech balloons in the way, you will never see my pen and ink miniature reproduction of Modigliani’s Nude Sitting On A Divan in the first panel, to the left of the couch, as a framed print on the wall of 3-G.

And in the second panel -- don’t even ask. Underneath those two speech balloons lie my finest renderings of negative space.

And do you see in the third panel where it says “SLAM”? Well, just above that, behind that damned speech balloon, I had inked the word Grand.

Because that’s how I felt after the two weekends it took me to pencil and ink this strip. It felt like I had hit a GRAND SLAM.

Back in 1986, when I first began working for King, I was briefly assigned the job of ghost-writing Apartment 3-G. It wasn't really a good creative fit, which my editor quickly
realized, and I was soon working exclusively on Zippy instead. A few strips from that mismatched assignment made it into print, and this is one of them.

"It took me almost two years to create this strip, which is why I consider it to be one of my best. I knew the minute I sat down to draw up the roughs that I absolutely had to get this one right. Every detail had to be perfect, from the words down to the pictures on the wall. The first three months at the drawing board were excruciatingly difficult. Nothing I was coming up seemed to work. At one point I had Sarge from Beetle Bailey playing a hapless doorman, but his large words and wide girth took up too much space in the frame. In a fit of desperation, I decided to step away from it for a year and join a cruise ship as a lounge singer. My hope was that the calming aromas of the sea air and my polyester leisure suit would clear my head. It did. The complete narrative for the third panel came to me in an instant one evening as I stood on the main deck choking on a slice of cassava bojo cake. The captain asked if I wanted to go into the kitchen and have a cup of tea. The rest is history.

It truly is my Magnum opus — an exemplary work that, quite honestly, should’ve been awarded the National Cartoonist Society’s Newspaper Comic Strip Division Award."

Since many dates are imported from Turkey and Iran, there are important and often overlooked factors in the expense of importing them to the United States.
For this reason and for many others, bringing a date to a nightclub or disco would be considered a thoughtful gift. In showing the conflict over the theft and subsequent gift of the date, I am hoping to shed light on complicated geopolitical struggles as manifested in the object of the dried fruit. In this conflict, each of the characters fully believes in their own rights to behave as they choose, as we so often see in conflicts between nations. In the last panel, we see that it takes the work of an independent third party, to bring peace and resolution. But is it a lasting peace? Isn’t tea also fraught with geopolitical implications? No doubt we will have to revisit the source of this conflict - the date itself - even though - at this point - the actual date may have already been fully digested.

Deciding the particular look of a character in a comic strip is always a challenge. Recently Francesco started writing strips showing how the preteen Hil, Faye and Nona would be like in their twenties. The first strip (in color) is what the characters ended up looking like in the strip. The second version (black and white) is my first interpretation which ended up on the cutting room floor. 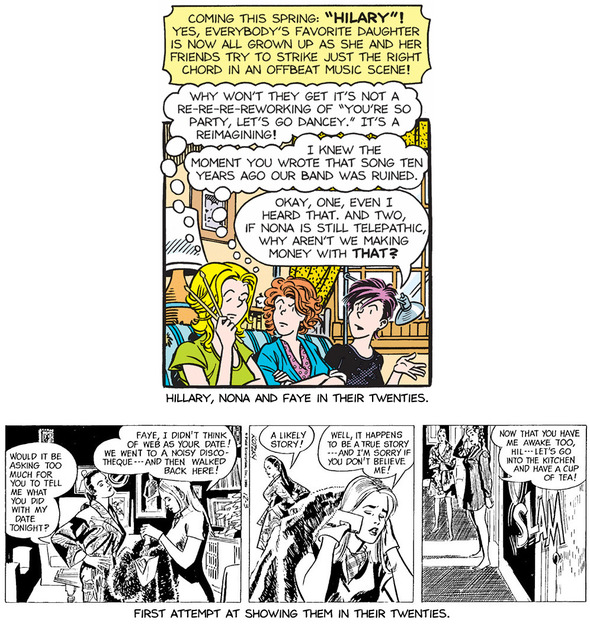 Back in the early days of Beetle Bailey, the style and theme of the strip was very different. The characters looked less stylized and more "realistic," so to speak, and Miss Buxley's romance with Beetle hadn't yet taken heat from the censors. Here's one of my favorites:

So many different strips, and such interesting stories about the creative process!  Which one of these is your favorite?