Today is National Waiter and Waitress Day! I've never worked as a waitress, but I have worked as a bartender, and I know what a thankless job it is to wait tables.

We've all had those jobs we've done either for love or money or just out of desperation, so today I asked the cartoonists to talk about their oddest job experiences before or even during their cartooning careers-- or to talk about some of their characters' jobs!

I became a professional cartoonist at age 15. No previous job, but I had a paper route. --Randy Glasbergen, The Better Half

One of a dozen or so jobs before cartooning paid the bills: In 1967 I was a store detective for a women's clothing outlet in lower Manhattan. I spent most of a summer watching women stuff bras and girdles into their bags and walk out the door. Never stopped a single
one. I was fired. --Bill Griffith, Zippy the Pinhead

Before I was hired at the Las Vegas Sun to be its editorial cartoonist, I pumped gas and parked cars for National Car Rental at Los Angeles International Airport. I worked the afternoon shift, so I spent my mornings working up a cartoon and then mailed it to the Sun. The Sun printed a few of my cartoons each week as it had been doing since I graduated from college. Eventually, I began to think that a cartooning gig wasn't going to become a reality. Hertz had offered me a job to become a manager for its location at the San Francisco Airport and I was seriously considering the position. So I called the executive editor at the Sun and told him about the offer from Hertz. He said: " You tell Hertz to stick it up their $#%@!&%." The next day I was hired as the editorial cartoonist for the Sun. -- Mike Smith, Editorial Cartoonist

Gee, just thinking about it I had lots of different jobs. I was a clam digger, a yard boy, a tobacco picker, a busboy, a popsicle maker, a graduate assistant, a laboratory researcher, a physics professor, a program director for a state energy conservation program, and a nuclear waste disposal consultant. Then I finally found a job I like. --Bud Grace, The Piranha Club 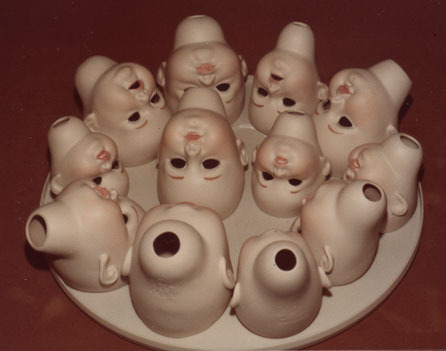 When I was around 19 or 20, my Mom and I made and sold reproduction antique porcelain dolls -- the toddler and baby kind.

It wasn't the type of thing I'd ever mention to a girl on a first date.

Somehow, hearing, "I make porcelain dolls with my Mom" coming from the mouth of a 20-year-old guy who's sitting on the other side of a pizza from you would very likely have shortened the evening considerably.

I'd usually say I was an "artisan working in ceramics" or something -- never the words "doll-maker."

I don't know why I'm still kind of uneasy talking about it, but there's a comfort in being able to assure you that I was responsible for the more manly aspects of the job. Meaning, I poured the porcelain, cleaned it, fired it, sanded it, and assembled the dolls.

Mom sewed elaborate clothing for the dolls -- from feathered hats, right down to their oh-so-lacy bloomers.

Once the parts were finished and ready, I'd put the dolls together in a sort of assembly line. In small piles on my work bench, there'd be porcelain heads, arms, knees, feet, torsos, glass eyes, etc.

Working like a Toy Story Dr. Frankenstein, I'd hook a heavy elastic to the dolls left foot, pass it through the assembled leg parts, then through the lower torso and the other leg parts, and hook the bungie to the right foot.

Then I'd snag the elastic with a long hook, pull it through the the neck hole to hook on the head, and sit the doll on the table before moving on to the next one.

After awhile, I'd have four or five bald baby dolls sitting there staring with their beady little glass eyes -- and no arms.

My Mom, who loves children beyond belief, would sometimes help with this chore, but hated the way I'd work by assembly line. Seeing the little armless dolls sitting there silently mourning their impairment would really, really upset her.

She would grieve over the sight a the point when she'd sobbingly bug me to, "Please put some arms on the poor little things!"

I'd of course comply, sometimes humorously attaching legs to the arm sockets, for which, Mom would pop me on the back of the head.

After a couple of years, we shut down our little shop of horrors. Our doll business was just too labor-intensive for the rate of return.

That was always given as the reason... but I've long suspected that knowing there were piles of parts and half assembled baby dolls out in the garage eventually got to Mom. --Jeff Parker, Dustin 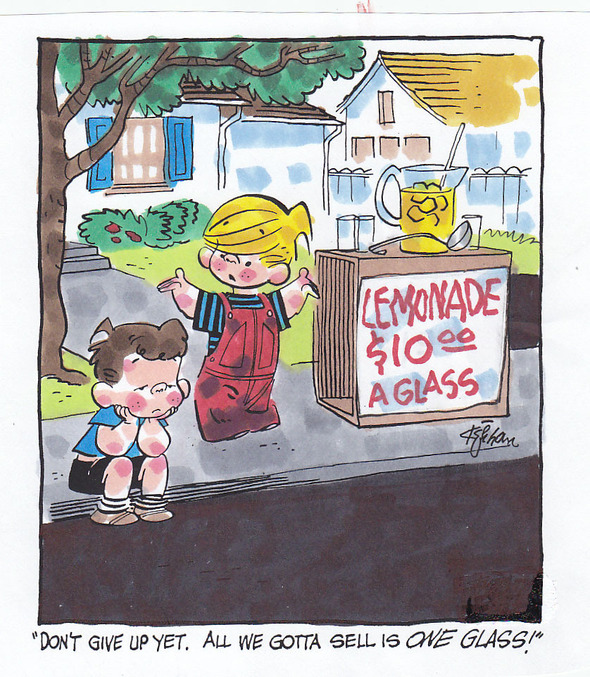 Here's a blast from the past in the form of some original art by Hank Ketcham of Dennis The Menace, sent in  by Ron Ferdinand!

I’ve had a few odd jobs in the past, especially during and right after college: babysitting, working at the Gap, working at a bookstore, doing paste-ups for my local newspaper… But two jobs stand out. One was my work-study job at college. I manned a tiny computer science library on campus. Occasionally patrons would ask me questions about I.T. subjects, and I would make up stuff on the spot. I mean, seriously? An artist? Talk about weird placement. But I loved that job. It was usually quiet and I got tons of homework done. Divine payback was my marrying a computer geek.

My other odd job was waitressing at a local Italian chain restaurant. I did it for a month before moving to Ohio to work for American Greetings. I “neglected” to tell my boss that I was leaving for Cleveland in a month – I just wanted to earn some quick cash for furniture. Anyway, I was awful. I have a terrible memory, I’m a klutz, and at the time I did NOT have a knack for multitasking. I’m surprised I even earned any tips. Despite my incompetence, they kept me on. But they were pretty hostile when I told them I was quitting after a month. I couldn’t show my face in there for years. --Terri Libenson, The Pajama Diaries

One summer, between college years, I worked as a valet parker in one of the Disney hotels in the Downtown Disney area. I am a big Disney fan and I really enjoyed the job. In fact, I learned (on other people's cars) how to drive a stick shift that summer! I also got to drive a lot of interesting cars, including a "Herbie The Love Bug" replica and a DeLorean, like in the "Back To The Future' movies. It was a really fun job! --John Rose, Barney Google and Snuffy Smith

Every summer starting in late high school and on through college I had a job decaling beer trucks. It was in a big, sweltering paint shop in an industrial part of town, and I would come home everyday matted with sweat, grime and overspray. I was applying ginormous Budweiser and Schlitz decals to delivery trucks and they became like fascinating art installations for me, giant mobile pop art murals. I also worked with some great sign painters, my dad among them, and I think I developed my lettering chops there. --Jim Borgman, Zits

The attached pic is an autobiographical drawing I did back in 1987 when I was still at the Joe Kubert School and working as a dishwashing at a local restaurant to pay bills. One day when I was taking out the trash I ran into a fellow Kubert student who was having much better luck at the time in the job market than I was. He rattled off the numerous freelance projects he was working on while I I literally was stuck holding a bag of garbage - not my finest moment. Luckily things turned around for me down the line, but a reminder that working freelance more often than naught can be feast or famine.  --Jim Keefe, Sally Forth and Flash Gordon