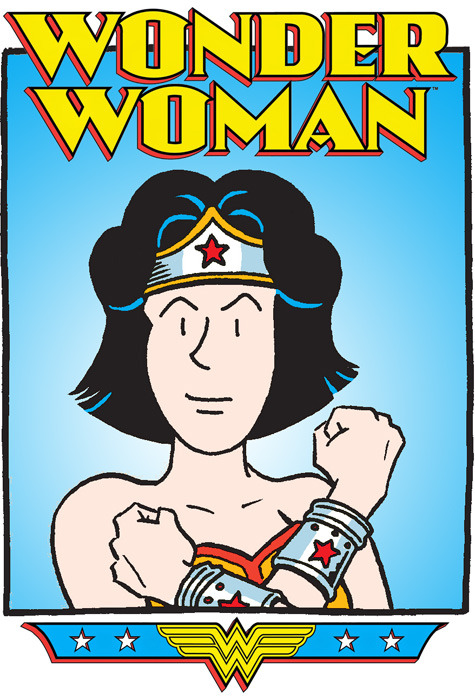 Superheroes give me hives. Way too much adolescent insecurity and muscle fetishism. Ripe for satire and parody, of course. But if I had to pick superpower, it would be the same as Z-Man: To disrupt all rational thought within a 50 mile radius!

If there are any jobs that require superpowers out there, MOTHER would certainly be on the top of THAT list.....especially DENNIS’ mother. lol!

This is more of an anti-hero (or villainess) strip. It’s an oldie, but one of my personal favorites. 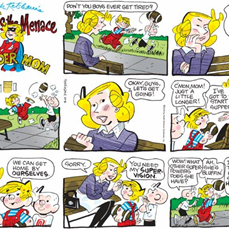 If 10-year-old me has anything to say about it, it would be spider-powers, but or Sally, she likes a certain Amazonian from Paradise Island.

The penguins don't have any superpowers (but they did once visit the Lost City).

Are you kidding? I, myself appear as a superhero in my comic strip! And I have done so in real life. The last time donned my superhero costume I got into a bar fight. And to everyone's astonishment, I won. No lie. Then the cops jumped me and tossed me out in the street. Here's a link to my blog where you can see the first week of a two week story about the extraordinary superhero, CHEESEMAN!!!!

Here's a Hi and Lois Sunday page with a superhero theme. Chance did a great job drawing the characters in this one.

Most of the Fastrack characters have been shown to have superpowers, at least within the realm of cyberspace. Dethany is no exception.

--Bill Holbrook, on the Fastrack and Safe Havens

Actually, I already do have a super power, but it is one that doesn't rank high in the Marvel/DC universe.

I am insanely, bizarrely gifted at finding clams in the mud with my toes in the ocean. Every summer I amaze friends and family with this power. I surprise even myself.

So my secret superhero name would probably be...Clamato.

If I could have any superpower... hmm... does collecting all the Inifinity Gems, defeating Thanos (and Galactus while I'm at it), and taking my place on the Throne of Asgard as its rightful ruler lay in his Odinsleep count?

I'm scared of heights but I probably wouldn't be if I could fly.

This strip was part of a week long storyline from 2010. It's the closest I've come to featuring a superhero.

I've always been a fan of superheroes, especially Iron Man and Spider-Man (as this comic strip of mine shows). But, if Snuffy Smith could have any superpower, I'm sure he'd want to be as fast as The Flash. That way, he'd have no problem outrunning Sheriff Tait!

If I could have a superpower it would be the ability to get six months ahead of deadline!

I'd like to have the super ability to time travel.

I think it would be cool to travel back to the golden age of newspapers like in the 30's and 40's... the glory days of being a cartoonist. Billboard sized comics!

I would love to meet up with "Dick Tracy" creator Chester Gould and tell him how some of his gadgets that seemed so far fetched back then have become very real in the 21st Century. Things like Tracy's wireless "wrist radio" is today's cell phone. Then in the 50's or 60's Gould "invented" the first Skype. Tracy was able to see the people he was talking to on his "wrist TV".

Invisibility, and the ability to travel in time! Not necessarily those two things together... oh, and maybe some weird power like the ability to walk around inside a  2 dimensional drawing. I've done that already, but only in dreams.