Twenty years sure go by fast when you’re not looking, and it’s been that long since Patrick McDonnell first let Earl and Mooch out to play in Mutts.

In 1994, Patrick was already a successful cartoonist and illustrator, and author of KRAZY KAT: The Art of George Herriman. His comic strip experience was a long-running series in Parents Magazine entitled Bad Baby.

His concept for a daily syndicated strip was to have a small white dog with black ears that goes on comedy adventures with his owner, a thin fellow with a large nose and small moustache. Ozzie would be the man’s name, and the dog’s would be Zero Zero. (“ZERO 0”)

Patrick wanted to be sure that many different animals would be included in the adventures, possibly even unlikely ones like lions and tigers. In discussion with King Features editor Jay Kennedy, adjustments were made. Jay believed the focus should be closer to home, with creatures closer to reader’s pets, and a cat seemed a logical playmate for the dog.

Patrick says that “Zero” was at best a temporary name for the series, and he had lots of alternate ideas filling many pages, but settled on Mutts.  Zero the dog was renamed Earl, after his own dog on the advice of Charles M. Schulz, who knew something about cartoon dogs.

In the mean time, test proofs were printed, still using the “Zero” title. Nobody remembers just why this was done, or who was supposed to see them. Perhaps they were intended as sales kit inserts before the new title was decided? Patrick thinks they may have been printed to see how the fine-grade craft tint paper he was using might look. 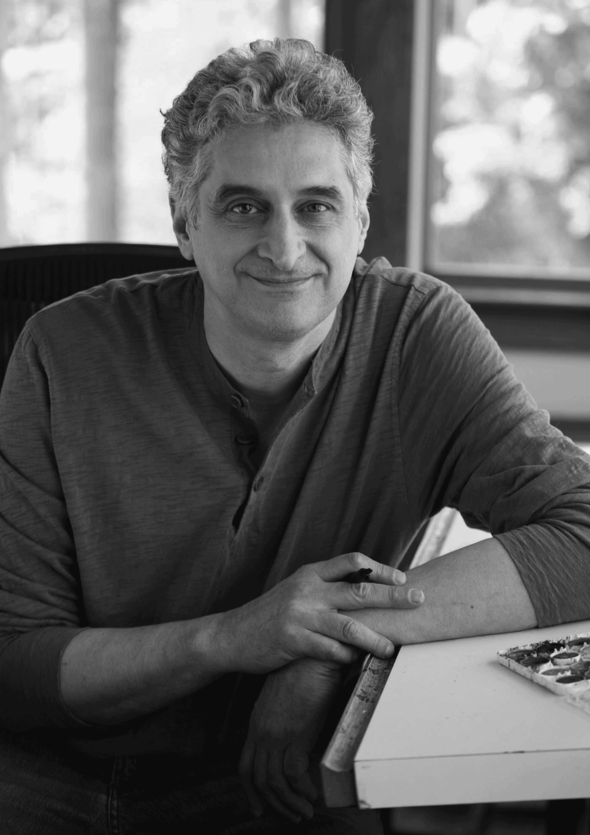 “ZERO” test proof page shows what eventually becomes some early “MUTTS” strips and some not. The fourth and fifth strips have never been printed in “MUTTS. 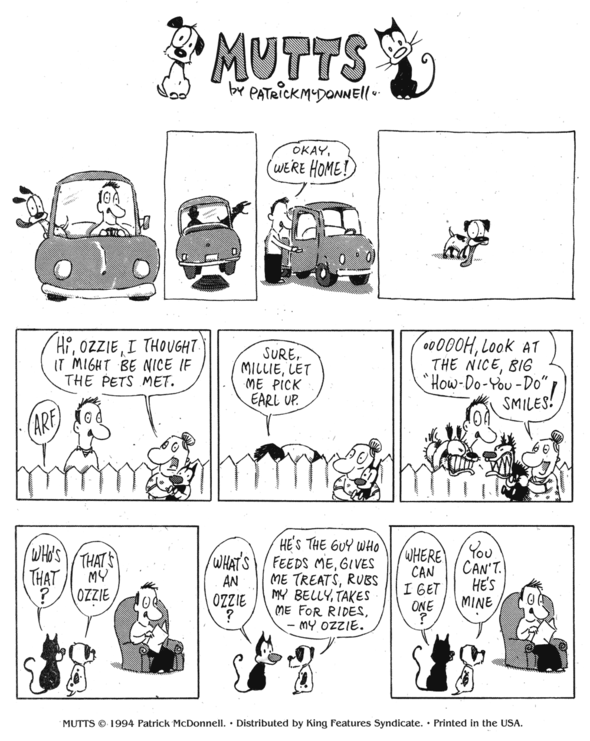 The first page of several with three strips each sent out to editors as a sales promotion for the new “MUTTS” strip in the summer of 1994.

The actual premiere “MUTTS” daily proof, 5-10 September 1994. The first strip, showing Earl’s car trip, was apparently going to be the first in any version. 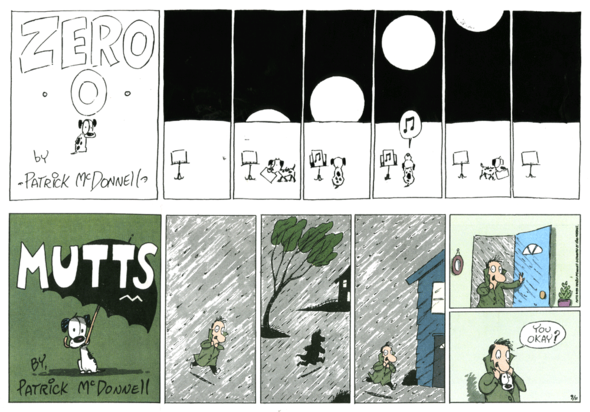 Above: One of the Sunday prototypes Patrick used when Earl was still called “Zero 0.”

Despite all these changes, “MUTTS” launched smoothly twenty years ago tomorrow. Happy anniversary!

Thanks to Patrick McDonnell for his help with this post, and congratulations!