Ask A Cartoonist: Hair, There, and Everywhere 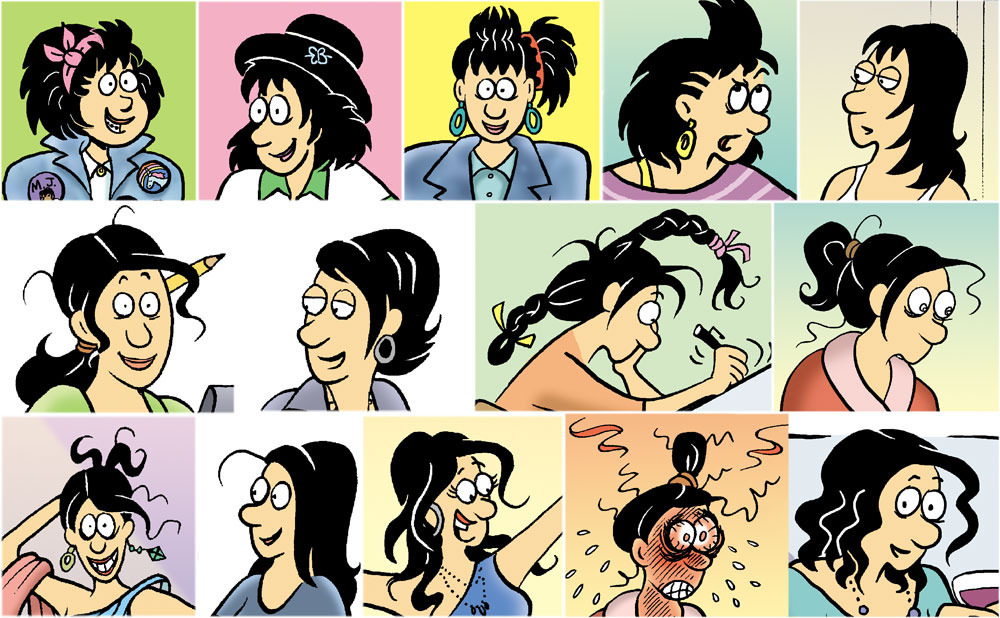 It's National Beauticians' Day, so remember to give your hairdresser a hug (my mom gave me my last haircut, awwww) when you're done reading this!

Hair is one of my favorite things to draw.  I have super curly hair, so I spent a LOT of my childhood drawing squigglies on self-portraits.  Once I started learning about dimensionality in art, hair was one of the first things I learned how to shade-- it was the 80s, and I spent a lot of time trying to make my ponytails look EXTRA POUFY.

Today, some of the Comics Kingdom cartoonist chimed in about drawing hair and about their favorite cartoon hairstyles!

My favorite kind of hair to draw is big hair. I wanted the three penguins to look the same, but for their featherstyle. It works, unless they wear hats, when I can't tell them apart. But if I could have any character's hairstyle, it would be the buzz cut of Norm Feuti's Gil. I once had a grade 2 haircut (after a BAD dye experience!) and loved it. --Alex Hallatt, Arctic Circle

I've done so many strips about hair (having only 8 hairs tied in a bow makes Zippy very hair-aware), that it was hard to choose, but here are two. Among other cartoon character's hairstyles, my favorite is Dagwood's "airplane wings" look. I often sport the same coif in the morning before I comb. --Bill Griffith, Zippy the Pinhead

I wouldn’t mind a day with Marge Simpson’s hair, provided I didn’t need to go into any crawl spaces. --Hilary Price, Rhymes With Orange 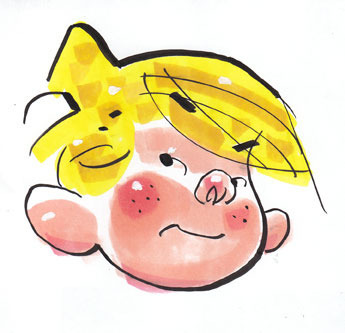 I certainly feel that Hank designed, for Dennis, one of the most unique hairstyles in the cartooning world. He took graphic shorthand to whole new level and created an icon which has withstood the test of time. --Ron Ferdinand, Dennis the Menace

My least favorite is Doris followed by Reverend Bob, simply because it takes a long time to draw it. Along those same lines, cross hatching is a pain it the butt. For example I drew this panel yesterday. The crosshatch on the guy's coat takes nearly four minutes. I draw three strips a day, and that's 12 panels which takes around 40 minutes just to do the crosshatch. I can't imagine how long it takes Bill Griffith to draw a Zippy strip. --Bud Grace, The Piranha Club 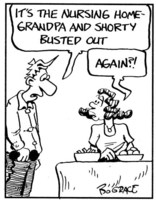 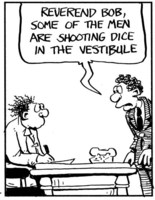 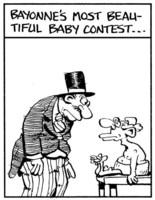 My favorite hair style is Miss Buxley's. I guess it depends on who's wearing the hair style. It's prettier than any of the soldiers wearing helmets or the General's bald head. Or maybe I just like pretty women. I also like the swirling pen stroke of her hair on the back of her head. I love to draw Miss Buxley! --Mort Walker, Beetle Bailey

For many years, Wendy's pointy hair was "Fastrack's" signature visual. It's evolved over the years, reflecting Wendy's own evolution and personal growth. (During a period when she was unemployed, her hair dejectedly pointed downward.) --Bill Holbrook. On the Fastrack and Safe Havens

Jill’s hair is my favorite to draw. It does so much, and she likes to change it up. See artwork for a chronological history of Jill’s hair (age 13 on). I especially love drawing tendrils and curly-cues; I like how Jill’s hair almost has a life of its own. It totally reflects her mood. --Terri Libenson, The Pajama Diaries 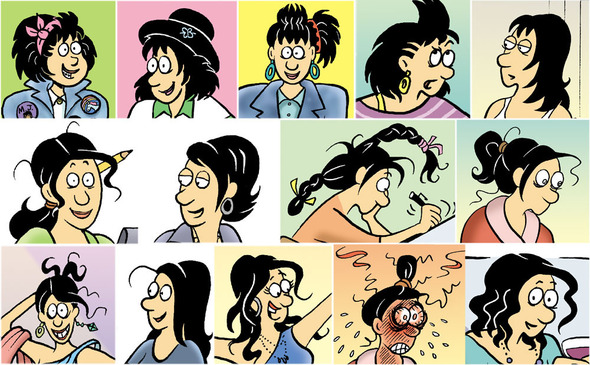 This cartoon is just based on the idea of women deciding not to color their hair - and it refers to 3 women (although Susan Sontag is dead) who don't cover over their gray hair. --Isabella Bannerman, Six Chix

Every once in a while I try to change Maeve's hair style...and every time I do, I get negative comments from readers. Not only that, I end up reverting back to her old style because it's just more comfortable for me to draw. The last time I made a change, I was particularly surprised at the response. While Maeve was in Paris, she decided to reinvent herself and gave herself bangs...a la Nelly Furtado...or so I thought. A number of readers kept commenting on how her nose looked different. One even said she looked like Miss Piggy! The thing is, I didn't draw her profile any differently than I always do...but something about the bangs made her look different. So I've gradually changed her hair back to the way it was...or almost. Just to prove I didn't change her profile, look at the two panel clips below...see? The nose is the same...but I do admit the hair style with the bangs did make her squared-nose look more pronounced. Funny how a different hair style can make a person look different, even when that person is comic character. --Sandra Bell-Lundy, Between Friends