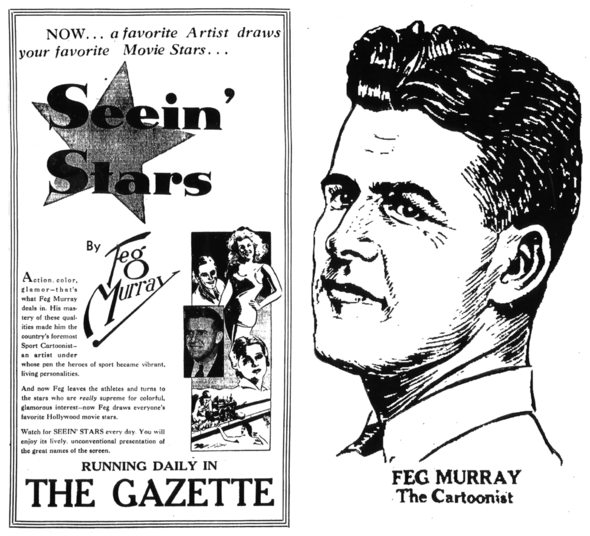 As I look at our celebrity-obsessed media today, it gives me pause to reflect on just how cheap fame has become, and how rare and hard-earned it once was. There was a time when actors didn’t often qualify as serious news personalities. Look at the early years of TIME magazine, for instance, and you’ll see very few stars on the cover; unlike today, when it, and nearly every other magazine compete with various celebrity faces to reach readers.

Back in the days when newspapers dominated the media scene, entertainment celebrities were still pretty much to be found only on the amusement pages, unless they had created some sort of scandal. You probably wouldn’t see them on the comics page either.

The big movie studios all had well-oiled exploitation machines with which to sell their wares. Newspapers, syndicates, broadcasters and fans would receive tons of material in the form of press releases and photos, all free, and all in the name of publicity. The photos were portraits and some scenes from specific pictures. The releases would be ready-made advertising copy, sometimes disguised as a review to be used as an ad by a local exhibitor, or used by movie critics as a fact sheet for an actual column.

There were comic strips about particular movie stars, such as “Charley Chaplin’s Comic Capers” and “Larry” (about Larry Semon), However, an all-encompassing theme of Hollywood stars, based on studio handouts didn’t take place until, as far as I can tell, the extremely obscure “Star Dust” by Westphal for the Midwest Feature Service which was sold (and re-sold) as a lot of about 250 starting in 1929. It featured a short biography of a star every day.

In 1931, a clever writer named Captain Roscoe Fawcett used free publicity to put out a daily panel called “Screen Oddities” for the Bell Syndicate. It did well and lasted almost twelve years. King Features finally stepped in with a bigger and better, if similar, panel that launched on 30 October 1933, called  “Seein’ Stars.” It was drawn by Fred (“Feg”) Murray, cartoonist of many talents and styles, who had once done a slapstick strip, but was, at the time, best known for sports cartoons and an on-and-off sports column. (He was once a track star, running in the 1920 Olympic games.) 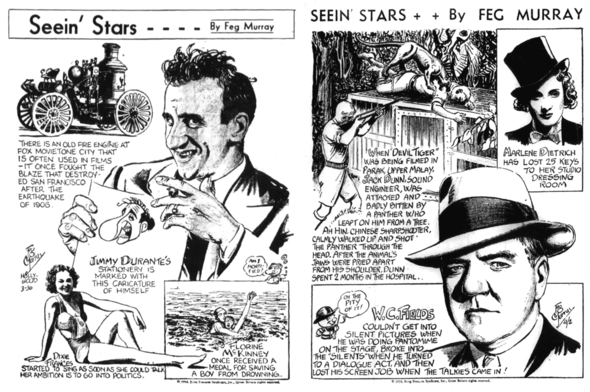 “Seein’ Stars” had a simple format, realistic likenesses of an actor’s face, obviously drawn from photos. (Feg must have had access to a huge still file). Around the edges were small actors' portraits or images of them in some amusing or unusual activity, with copy describing some factoid of interest about the performers, resembling the “Ripley’s Believe It Or Not” format. Also, lurking about somewhere was Murray’s little mascot, a bear-like little character who would add a wisecrack or two. He had been with Feg for years, like part of his signature. 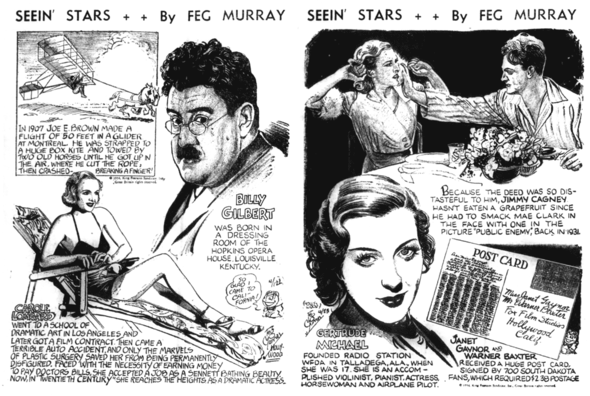 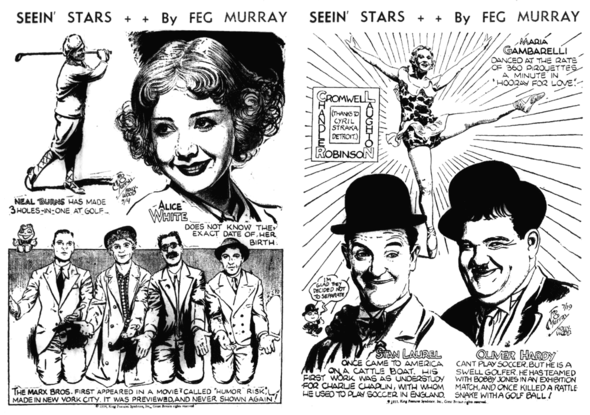 The material on the stars must have been from their studios or their agents. It’s less than scintillating, at least to your Archivist’s jaded, world-weary eyes. Murray would tell about small milestones in the performer’s careers, what they did before fame, when they were nobodies like you and I. For example, “Joe Penner Once sang in a Detroit Choir for 39¢ a week” or details to impress people who have no idea how movies are made (“Although a strict vegetarian, Francis Lederer actually ate raw meat to give reality to scenes in “Man Of Two Worlds”, … “Lucille Ball doing a comedy dance for “That Girl From Paris” had to fall down 36 times in one day.”). Utter piffle (“The day after he received a lucky rabbit’s foot from an Indian Princess, Bruce Cabot was signed by R.K.O” … “Jean Harlow recently found a pearl in an oyster at the Trocadero Café in Hollywood”), or even outright fakes (“Both Fields and Durante, possessors of the most famous schnozzles on the screen, were born on Feb. 10th.”). 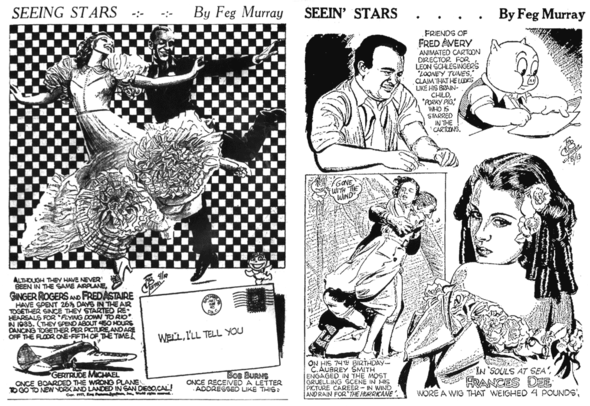 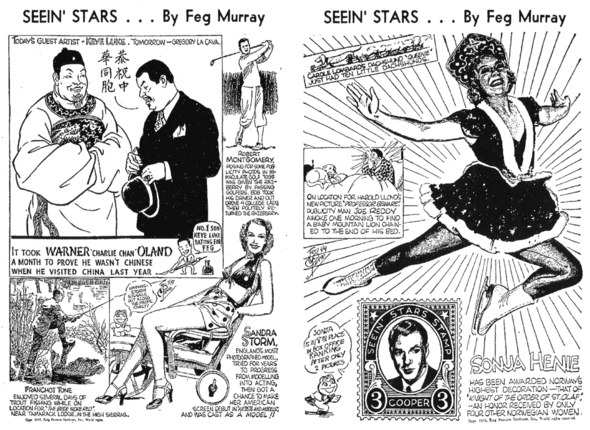 To spice up this daily helping of baloney, Murray added his own obsessive touches, like working out everything that had something to do with the particular personality at hand and a certain name, title, letter or number, and work it into a shape or puzzle or just throw out a non sequitur like “MP stands for Mary Pickford and Motion Pictures!”  He also had an affinity for trick addresses on fan letters. For awhile, he worked his own movie star-oriented stamps into the panel. He must have been a philatelist.

The panel ended in 1941, but the Sunday version hung on, mainly in the Hearst comic section Puck, until 1951. 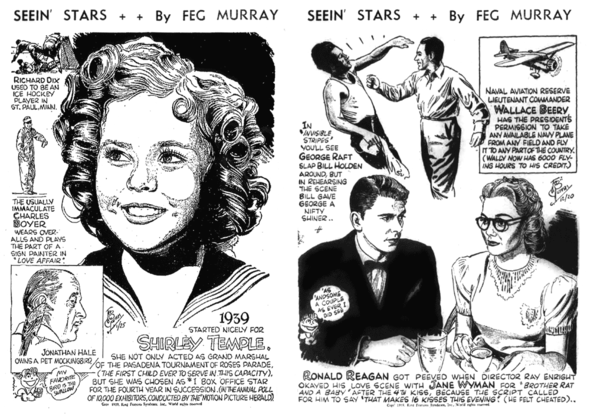 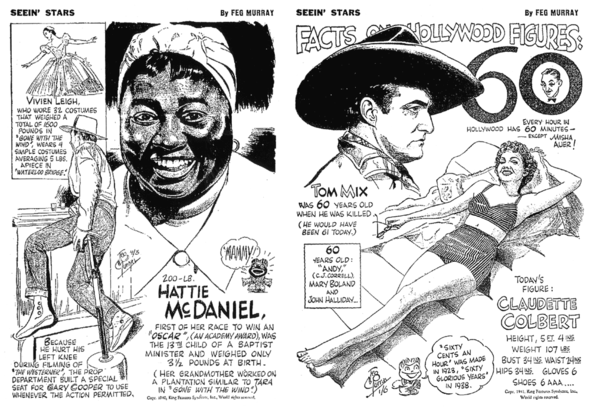 As an illustration of how fame has changed, I show one of Murray’s stamp cartoons here today. No one would have thought that 60 years later (in 2009) a real postage stamp would have Gary Cooper on it.

Moving on to reader comments, we have this week:

To Mark Kausler:
The earliest period of “Thimble Theatre,” which we looked at last week, is basically very elemental dumb gags, or as the promo described, “Sap” humor. I just read most of them from this time, and there’s a lot that is pretty repetitious and not that clever. Segar showed his genius as the series developed some depth of character and story continuities in the mid-1920’s. Also, I think he could do a lot more with the Sunday page, as you saw in the examples. By the way, thanks to Cole Johnson for the use of them.

To ramapith, Timothy Fisher:
That’s right- the word balloon describing Castor as “My Brother” must have just been    mistakenly drawn pointing to Ham. That’s unusual for Segar, maybe he had a careless assistant then.

To John W Kennedy:
I’m sure if the 1919-28 “Thimble Theatre” strips were collected, it could be a good seller among  loyal fans, but for a wider appeal, and more sales, publishers will always much rather take a chance with Popeye than Gravy guy.