Today, we go on an in-depth journey into the world of cuteness.  We have previously looked at the work of Grace Drayton (nee Wiederseim) before when we put up some of her “Toodles” strips from 1903. See HERE.

Grace was the first female Hearst Syndicate cartoonist, though she did go through other early syndicates as well, most noticeably the Philadelphia North American Company, where she created “The Turr’ble Tales of Kaptain Kiddo.”

Toodles was a little girl who stumbled into mischief around the house or in the vicinity of an adult, who would suffer for it and/or give out a punishment. Kiddo was a little boy who told incredible stories, involving himself and monsters, storybook and even Greek mythology characters, by way of narration running under each panel. Grace loved these characters and formats, returning to them again and again.

She spent many years doing cut-out dolls for “Dolly Dingle” in the fashion magazine, The Pictorial Review. Her most lasting contribution to American culture was, of course, the Campbell’s Soup Kids, whose advertisements started in 1904.

After “Toodles,” she had another series for Hearst called “Dottie Dimple” that ran from 1908 to 1911. However, it was pretty much the same character in the same situations as Toodles had been before she met Pussy Pumpkin and went on fantasy adventures.

Caption: JUST AS DIMPLES WAS LAUNCHED IN JANUARY 1914, SHE GETS SOME HELP FROM LOUIS WAIN’S TOBY MALTESE TO MAKE A PITCH FOR THE INDIANAPOLIS SUNDAY STAR.

Caption: GRACE DRAYTON (1877-1936) AND HER CREATION, DIMPLES, MAKES AN ENDORSEMENT FOR THE ST. LOUIS REPUBLIC IN 1916. (IT DIDN’T HELP, THE REPUBLIC BELLIED UP THREE YEARS LATER.)

By this time, she had become famous and was doing nicely with licensing dolls and books. The next series she would do for comics was “Dimples,” yet again, pretty much the same character, a chubby little tot that got into low level calamities. This time, though, Drayton owned the character, and Hearst did the syndication. It was often seen in the Hearst secondary section lineup, along with “Buster Brown” and “Polly and Her Pals.” “Dimples” lasted from 1914 to 1918. The full-page gave Drayton an opportunity to show off her art-nouveau linework, and her love of costumes and high fashions that were on view in her paper dolls.

Her next series came ten years later, now with rights kept by King Features. This was her chance to do a daily as well, called “Dolly Dimples and Bobby Bounce.” She really liked to keep the characters and names alike! Dolly was just Toodles/Dollie/Dimples now with a short bob replacing her Goldilocks. Bobby was just Kaptain Kiddo in 1928 style rompers, and they were joined by a fluffy white dog named Comfy, similar to Kiddo’s stalwart sidekick, Puppo, and Dimples little pet, Fido. 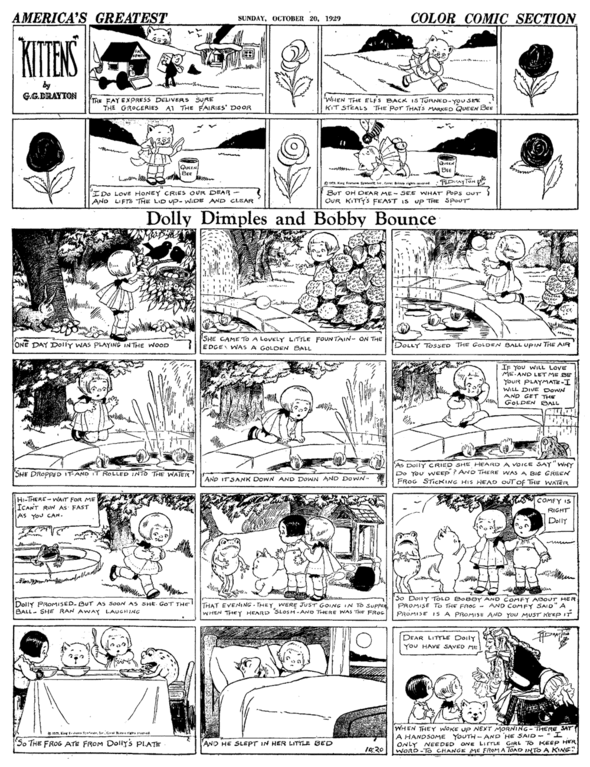 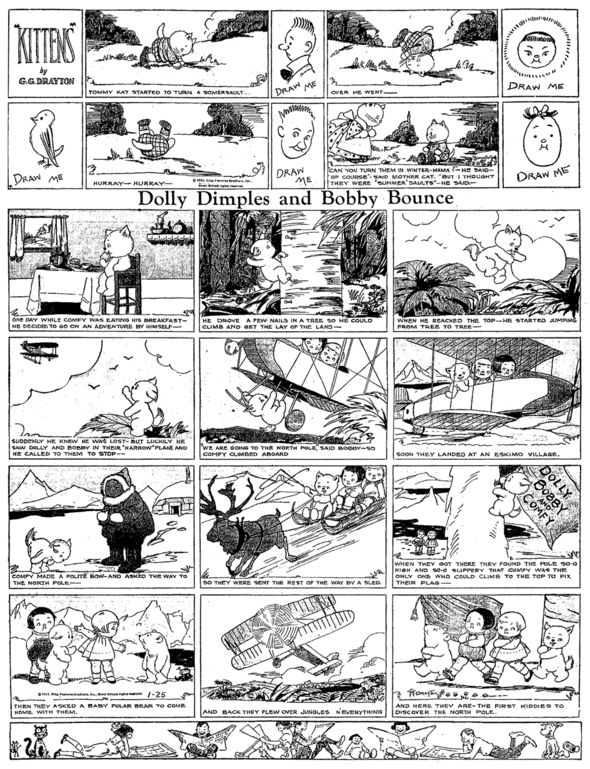 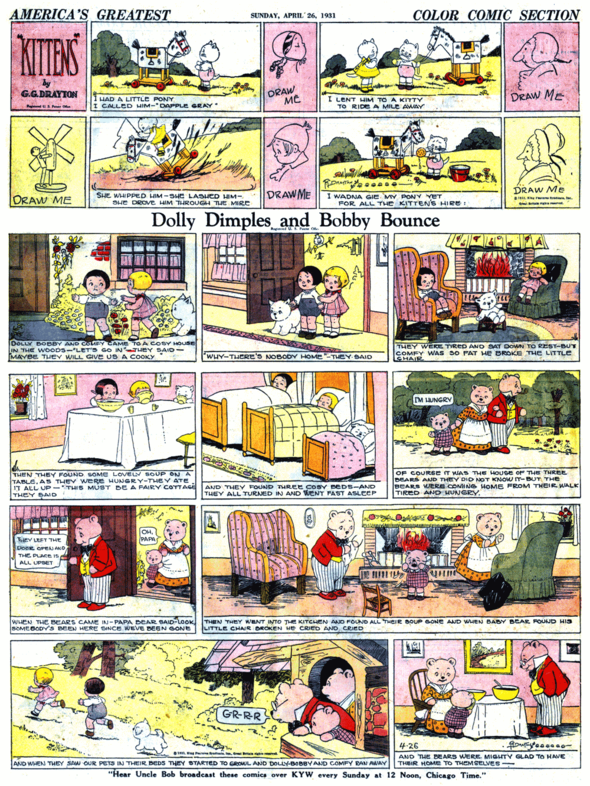 The series never gained the popularity of her earlier successes. The daily ended in 1932, and the last Sunday was published in the Spring of 1933. Her last series came in 1935, when she drew “The Pussycat Princess,” written by Ed Anthony. This was a story of the fabulously rich but sweet royal family of Tabbyland and their gentle doings. It was offered only as a tabloid and in  half-page size. It didn’t build up a following in the short time that she worked on it, which was only the first year. However, it carried on without her until 1947. Take a look at another one HERE.

Thanks to Cole Johnson for his help. Let’s all meet back here next week.

P.S. Here are my replies to last week's comments on “TUFFY”:

To Little Lulu:
Syd Hoff had a kind of static way of drawing pretty female faces, and also plain ones like Tuffy’s.  When he temporarily changed “Tuffy” (and her sister too) to make them softer and cuter, they seemed to be out of his style, like someone else had redesigned them for him. Why would Hoff  change the Tiffle girls like that? It would seem that, maybe, he had more in mind than just influencing editors to pick up the strip for their newspapers ... maybe to get some licensing with a different look. That all crashed in bitter disappointment when you got that contract from Paramount and that great Kleenex deal.

Whatever the reason, the short-lived nature of the change indicates that Hoff wasn’t very happy with it, and he went back to his original concept after only about ten weeks.

To Cephasatl:
Glad I could scrounge up some to run. Too bad Hoff never did a Sunday. Perhaps, someday I’ll run some more “Laugh It Off.”