Ask The Archivist: Just The Type

I was going to do something memorializing Jimmy Hatlo (1897-1963) who died fifty years ago last month, just days after President John Kennedy, but I’ve already done several entries recently. See HERE, HERE, and HERE. So instead, we’ll show off the solo handiwork of one of his closest collaborators, Bob Dunn (1908-1989). 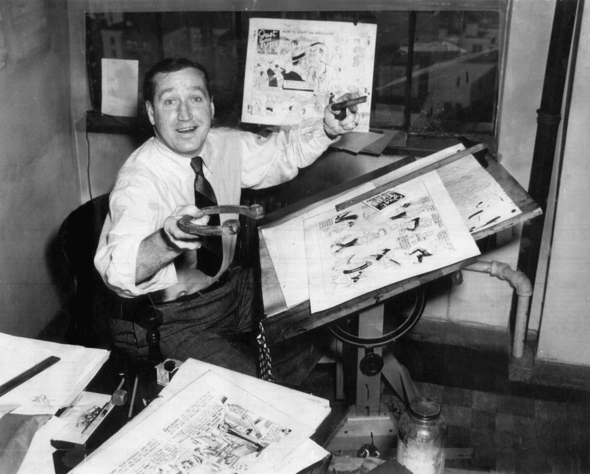 Bob Dunn in his glamorous studio takes aim at the photographer’s noggin with a lucky horseshoe.  The THEY’LL DO IT EVERY TIME original of 17 December 1948 is on the desk.

Bob Dunn began his career in the art department of the Newark, N.J. Ledger, then became a gag writer for Broadway shows and panel cartoons for magazines. In 1933, he moved to New York and King Features. He even wrote humor books, and is credited with inventing the Knock-Knock joke.

A sample of BRASSBAND BIXBY from 1942.

He dabbled in strips early on, one being “Brassband Bixby” for “Press Alliance,”  a miniscule syndicate that took on features such as obscure foreign comic imports like “O. G. Whiskers” and some columns such as Elsa Maxwell’s. Dunn had the good luck to be part of Jimmy Hatlo’s circle of ghosts and would work on the They’ll Do It Every Time panel as well as Little Iodine Sunday strip and comic books. 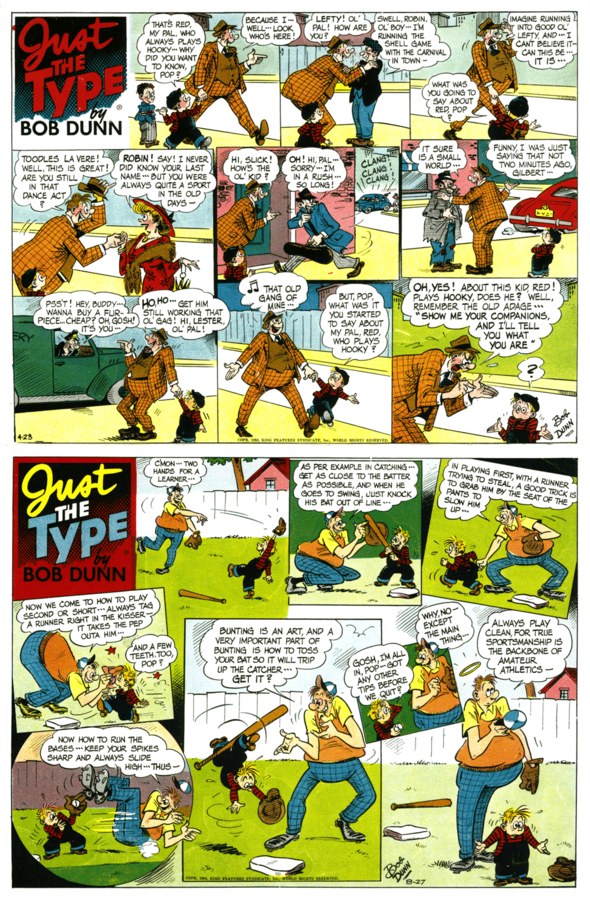 Dunn was a man of huge energy, and was able to produce a King Features Sunday series from 1946 to 1963 called Just The Type  as well. It was a rectangle filled with Bob’s observations on just about any topic that came to mind. Usually these thoughts are shown as a projection from a tall, paunchy lout, coincidentally named Dunn, who would be describing the subject to his small son, who took great pleasure in laughing at Pop’s dopey goings-on. 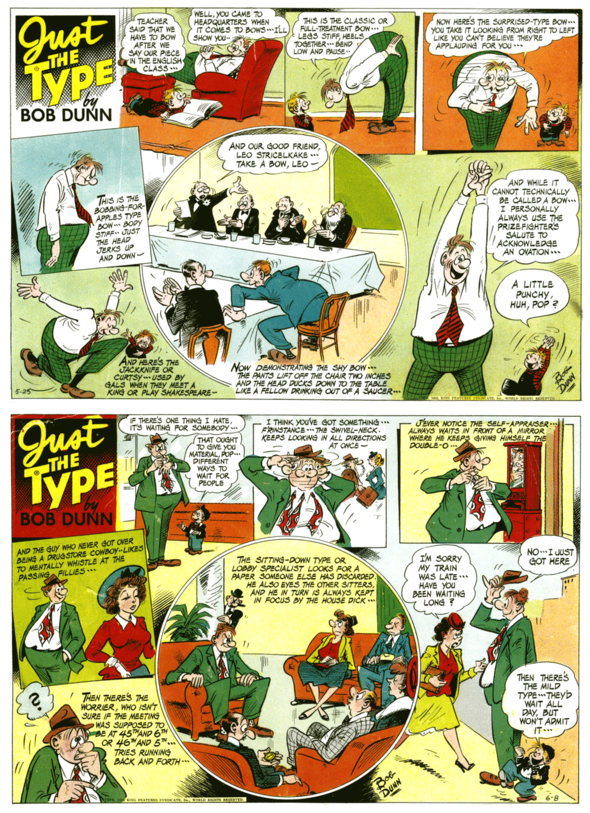 This was seen in few papers, mainly in the Hearst chain, notably in the Saturday New York Journal-American and the Chicago Herald-American color comic sections. It’s said the feature was given to Dunn to keep him (and Hatlo) happy. 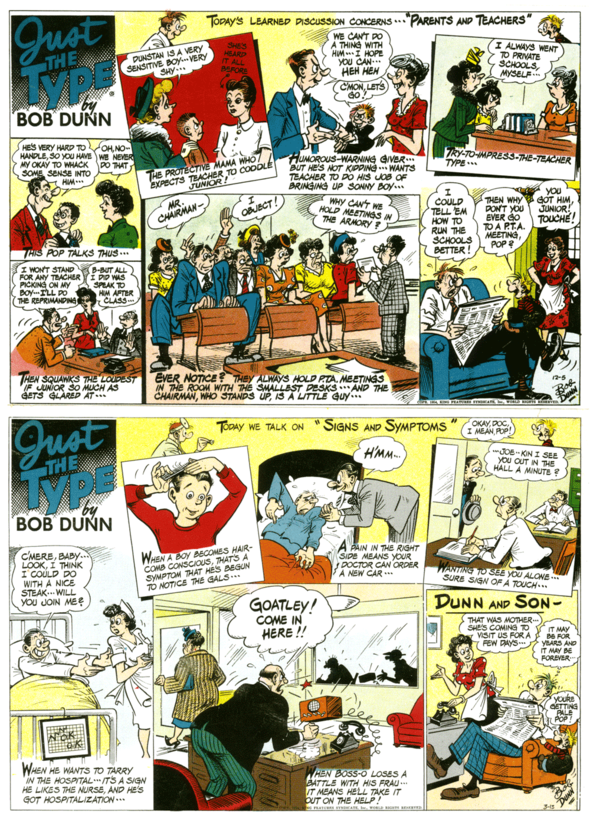 Interestingly enough, Dunn was a TV pioneer, having a cartoon-drawing charades shows as early as 1946. (“Face To Face” on NBC, then “Quick On The Draw” for DuMont, 1950-52). Bob later became a member of the Lambs club, and official toastmaster and then president of the National Cartoonists Society  in the 1960s. 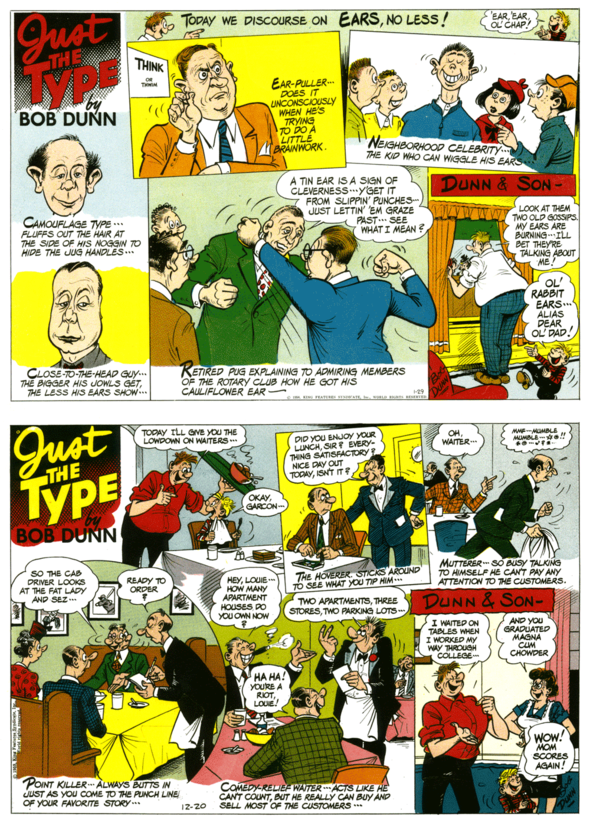 In a fortuitous turn of fate, we threw in the towel on Just The Type one week before jimmy Hatlo’s death (1 December 1963), just in time for Bob to take over his strips.  He’d been pretty much doing the Hatlo titles for years, but now he devoted all of his time to them, finally getting to sign his own name on them in early 1966.

Moving on to reader email:

To Cephosatl:
We may bring back some of the Raymond Flash Gordons, but we have no plans just yet.