Ask the Archivist: Prosit Neujahr! Plus a Vintage Expansion Update.

Before we jump into this week's "Ask the Archivist," we are annoucing the results of our Vintage Expansion survey we ran last month. Based on your votes, we will be adding Boner’s Ark, Johnny Hazard, and Redeye to our vintage line-up in 2014. We will follow up with start dates once we have finishing updating our archives. Please note that vintage comics are only available for Royal members. You can learn more about becoming a Royal member here. Thank you for being fanastic comic fans!

As the old year comes to its demise, a new year holds hope and promise.  One hundred and ten years ago that year was 1904. Below I show you what Sunday comics laughs were offered then in the New York American and Journal.

Our big stars back then were the Katzenjammer Kids, Mr. Jack and Happy Hooligan. Well known then but forgotten now were Swinnerton’s adventures of Noah and his passengers on Mount Ararat,  Opper’s throwback to the Flintstones called Our Antediluvian Ancestors, and F. M. Howarth’s bug-eyed Lulu and Leander. There seems to have been a theme that first week of ’04, Leap year marriage proposals, and how the boys try to encourage or avoid them. 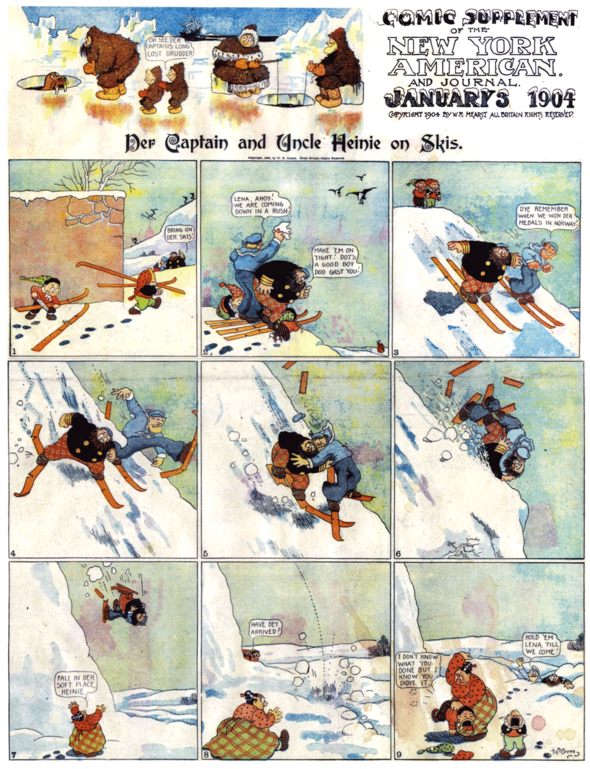 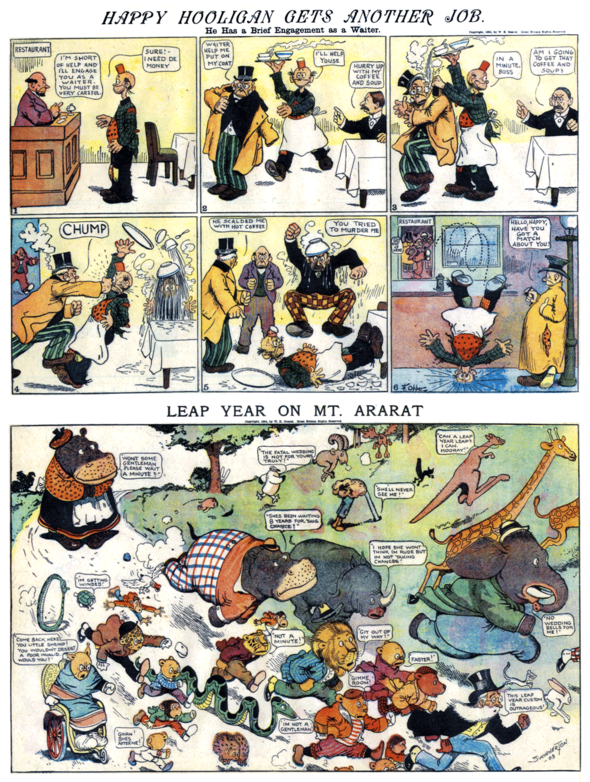 German speakers have been in America since colonial times. German immigrants established many communities from Pennsylvania to the far west, and with them, brought a vibrant Deutsche language press. One of these papers was the St. Louis Westliche Post (1857-1938), which was owned by Joseph Pulitzer, longstanding staffer and executive, beginning in 1878. He went on to build his newspaper chain, most notably purchasing the small New York World in 1883, modernizing it and building circulation until it had one of the city’s largest circulation bases.

William Randolph Hearst followed this pattern, starting out with the San Francisco Examiner, then jumping to the East coast, purchasing a minor daily, The New York Morning Journal in 1895. Ironically, this paper had been created by Joseph’s brother, Albert Pulitzer in 1882. He had followed his brother’s business model by creating a German language paper, too,  a doppelganger called the Morgen Journal. Hearst kept this paper going too.  The Morgen Journal was different from the competing German dailies of the time, such as the venerable (and still published) New Yorker Staats-Zeitung, bringing a fresh all-American flavor and Hearst style, being well stocked with lots of photos, celebrity gossip, lively politics, and comic strips. In fact, the exact same thing as the regular English Journal, printed at the same time and on the same presses. 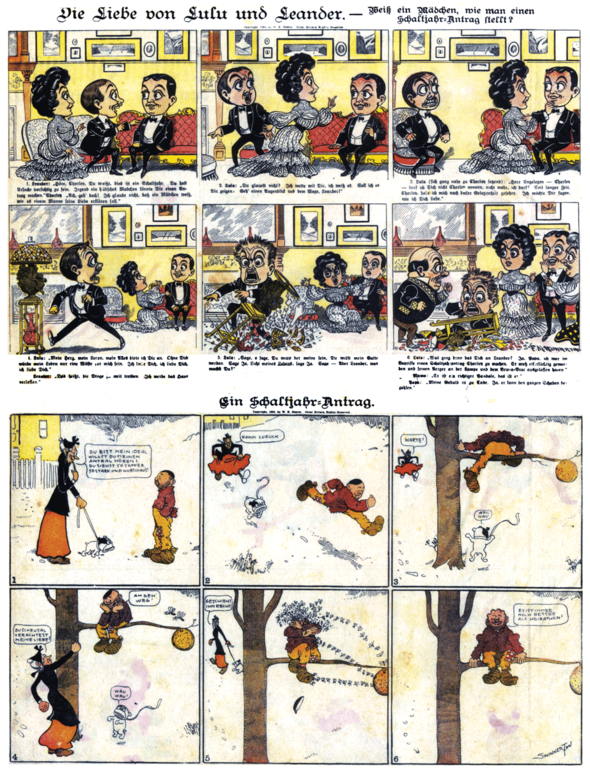 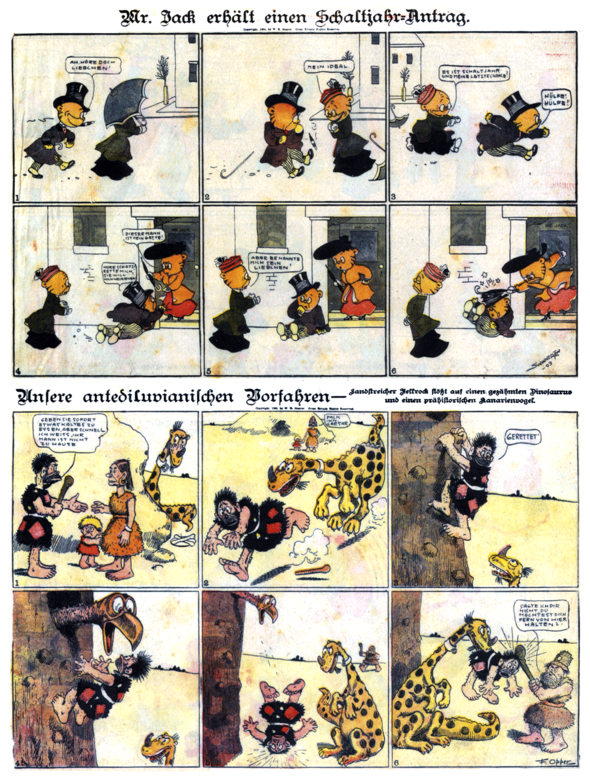 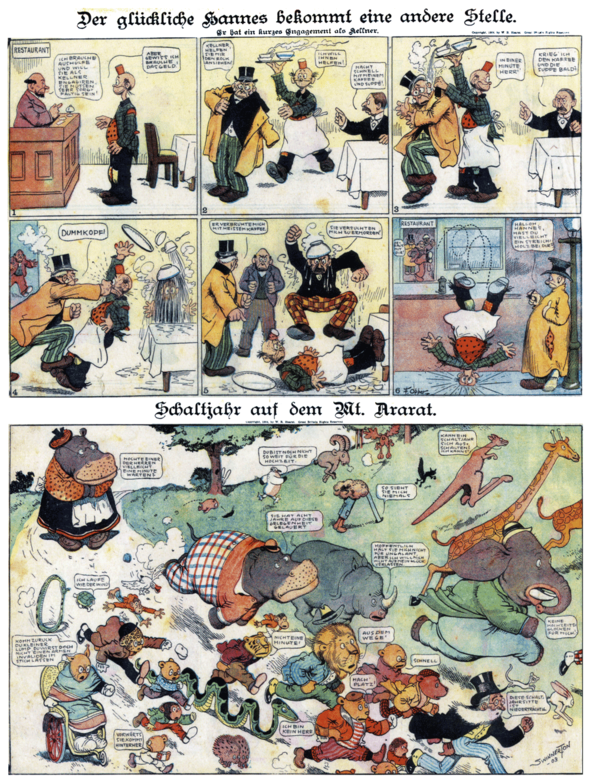 During World War One, the backlash against Germany was severe, often with official sanctions resulting in changing place names, barring German books from libraries, and schools being prevented from teaching German lessons. Hearst was accused of being pro-German because he sometimes criticized Allies. He also had recently purchased the editorial cartoon weekly, Puck, which originally was German only, and had stayed tilted toward a teutonic point of view right up to the point Hearst acquired it in 1916, or, the eve of direct U.S. participation in the war.  Both Puck and the Morgen Journal were quietly terminated in 1918.

The Puck trade mark of course was revived as the brand name of the Hearst newspapers Sunday comic section in 1931, but the Morgen Journal faded away for good. Today, it’s a very rare title, with no known complete run.  Due to an office fire in the mid 1910s,  no file exists before 1911.

Glad you liked POLLY, we’ll see more of her again. You’re the first to respond to one of my posts in the redesigned Comics Kingdom site, so thanks.

Yours,
The KFS Archivist