Happy Thanksgiving! Today we’ll look at the Bob Barnes, a classic mid-century gag panel cartoonist, toiling for years at his craft before finding syndication success with THE BETTER HALF. 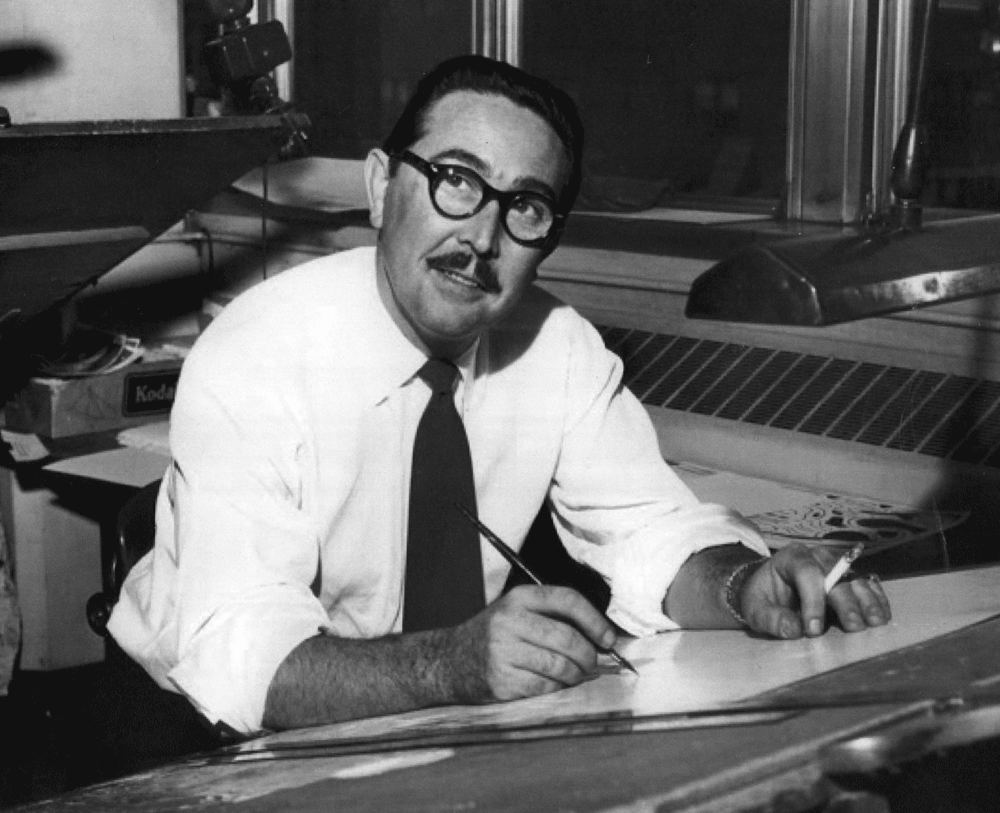 Barnes had gone to a commercial art school in the 1930s, and found early work in trade publications and some advertising in several papers, including The Oregon Journal and Portland Telegram in his native city. He sold gags to  magazines like Collier’s, College Humor, Look and  1001 Jokes. Syndication work started in the late 1940s with a panel anthology called “Laff Of The Week” for the small  National Weekly Newspaper Service, lasting until 1951 when the Register and Tribune syndicate took his  new series, “Double Take,” a two-panel, before-and-after type of  gag. He did that from 1951 to 1957, when others took over. 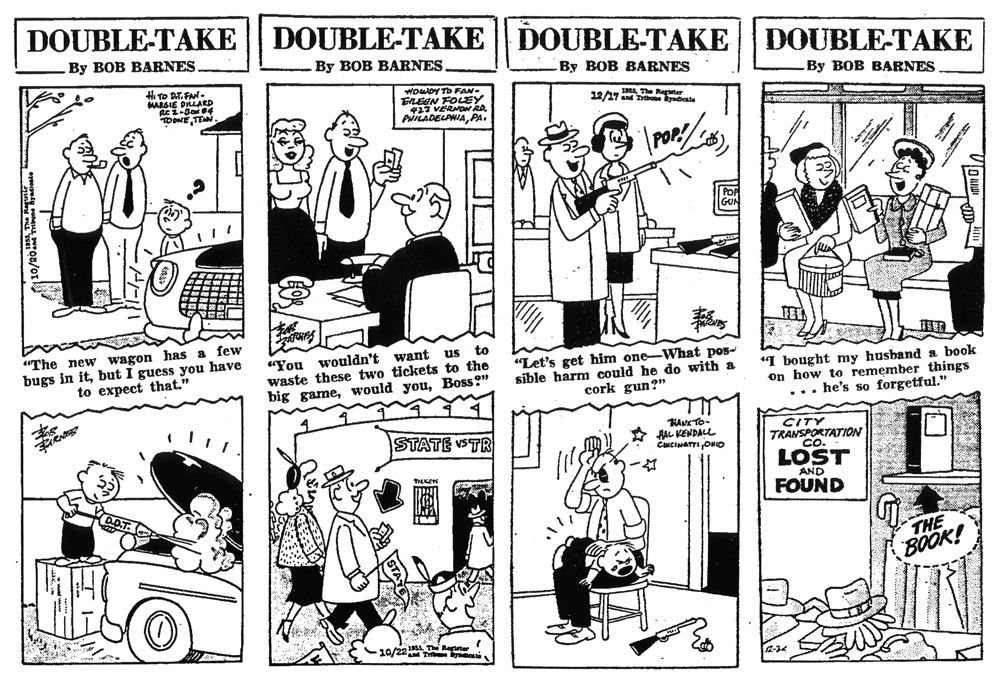 Some samples of LAFF OF THE WEEK and DOUBLE TAKE.

During this period, he came up with another title, with the simplest of premises, a wisecracking middle-aged couple, much like Barnes and his wife Ruth were. 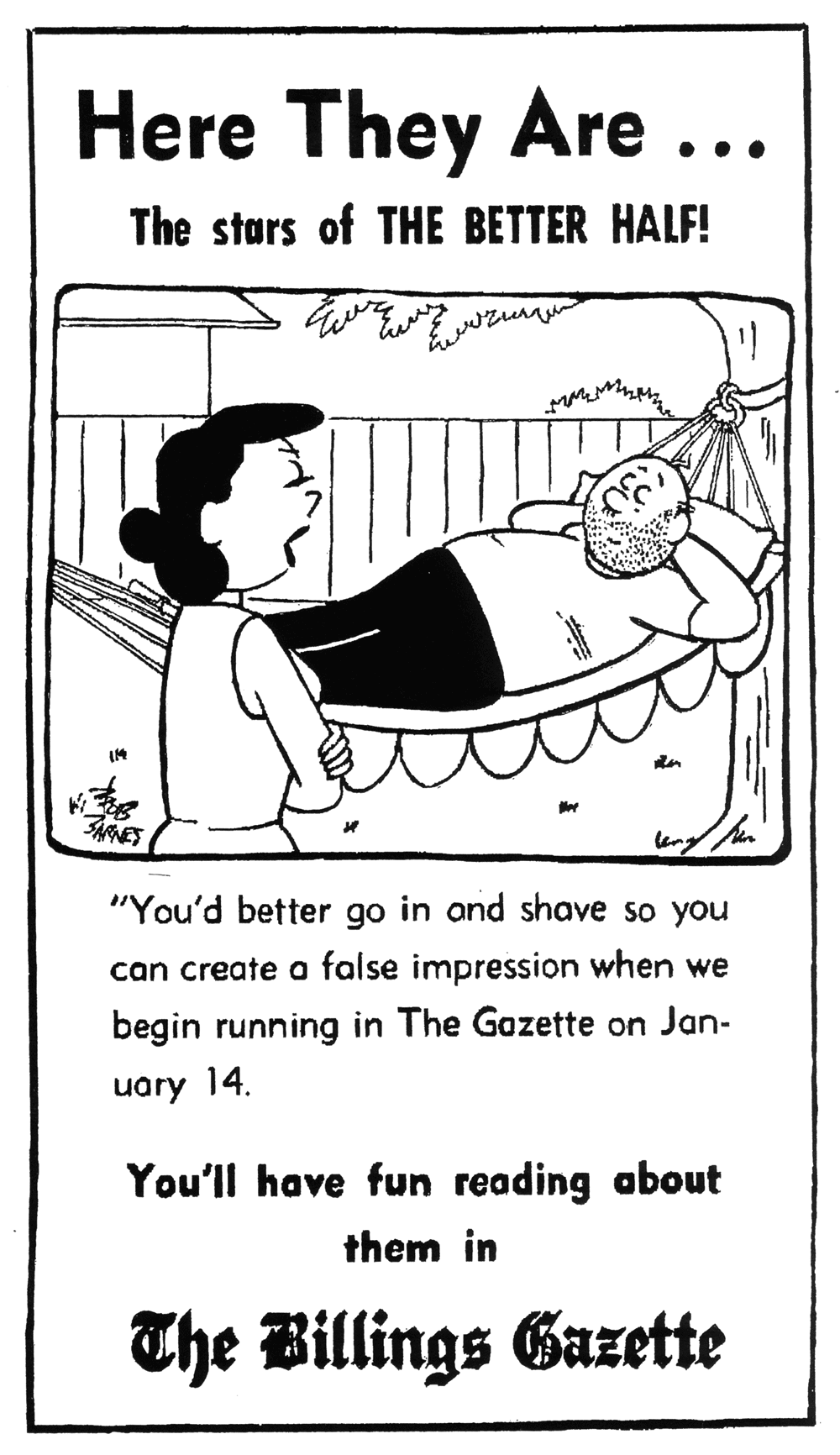 Originally a series in The Saturday Evening Post, THE BETTER HALF was launched by Register & Tribune as a syndicated newspaper feature  in June 1956, and owing to what then passed for a fresh approach, it gathered more than 200 clients. When I say a fresh approach, I mean that married couples in the comics were often of the henpecked husband and  rolling-pin-wielding spouse variety, or the loving, always-in-harmony families in non-slapstick titles.

THE BETTER HALF was not based on physical humor, and it was not all sweetness and light either. Stanley and Harriet Parker seem to have genuine affection for each other, yet their lives are an endless stream of wise cracks and smart alecky overstatements, often at each other’s expense.

The gags were often focused on Harriet. She was not only getting into arguments with Stanley, she’d have encounters with bus drivers, store clerks, and butchers, as well as doctors making house calls, the milk man, TV repair man  and laundry man. What ever happened to those guys?

Stanley had various hobbies that Harriet took a dim view of like hunting, fishing and making things in his home shop. Together they’d go out dancing, do sports like golf or swimming, and they see a lot of films, often to Stanley’s taste and Harriet’s distaste. 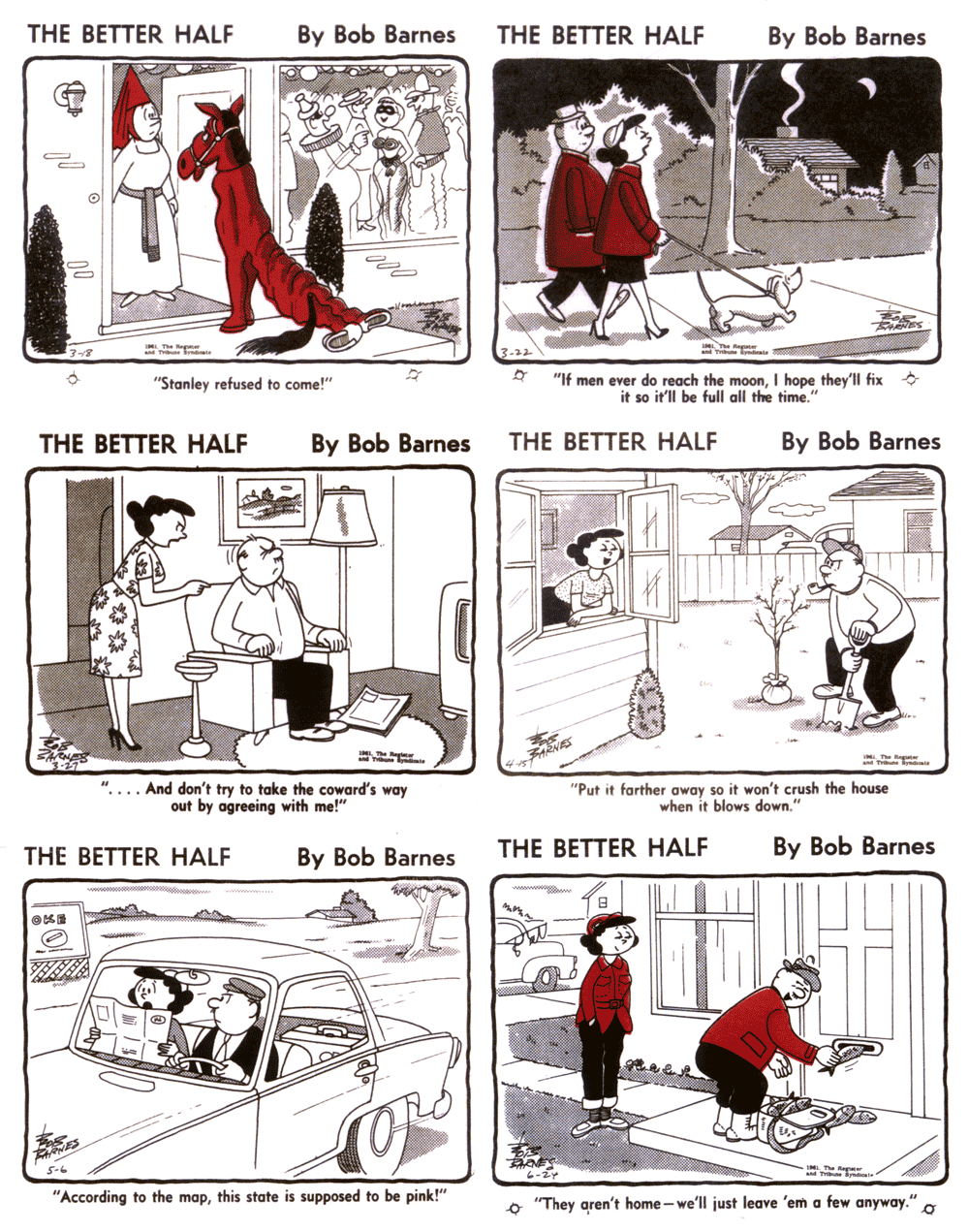 I recall that, at the time, a lot of people regarded this as edgy,  perhaps a bit too adult for a family comics page. Often there is a feeling of sexual tension, especially since one of Stanley’s chief passions seems to be looking at other women, in the movies, on calendars, even  on the street, as Harriet makes cutting remarks (not that it’s implied he might be actively pursuing them; he just does it to bother her). 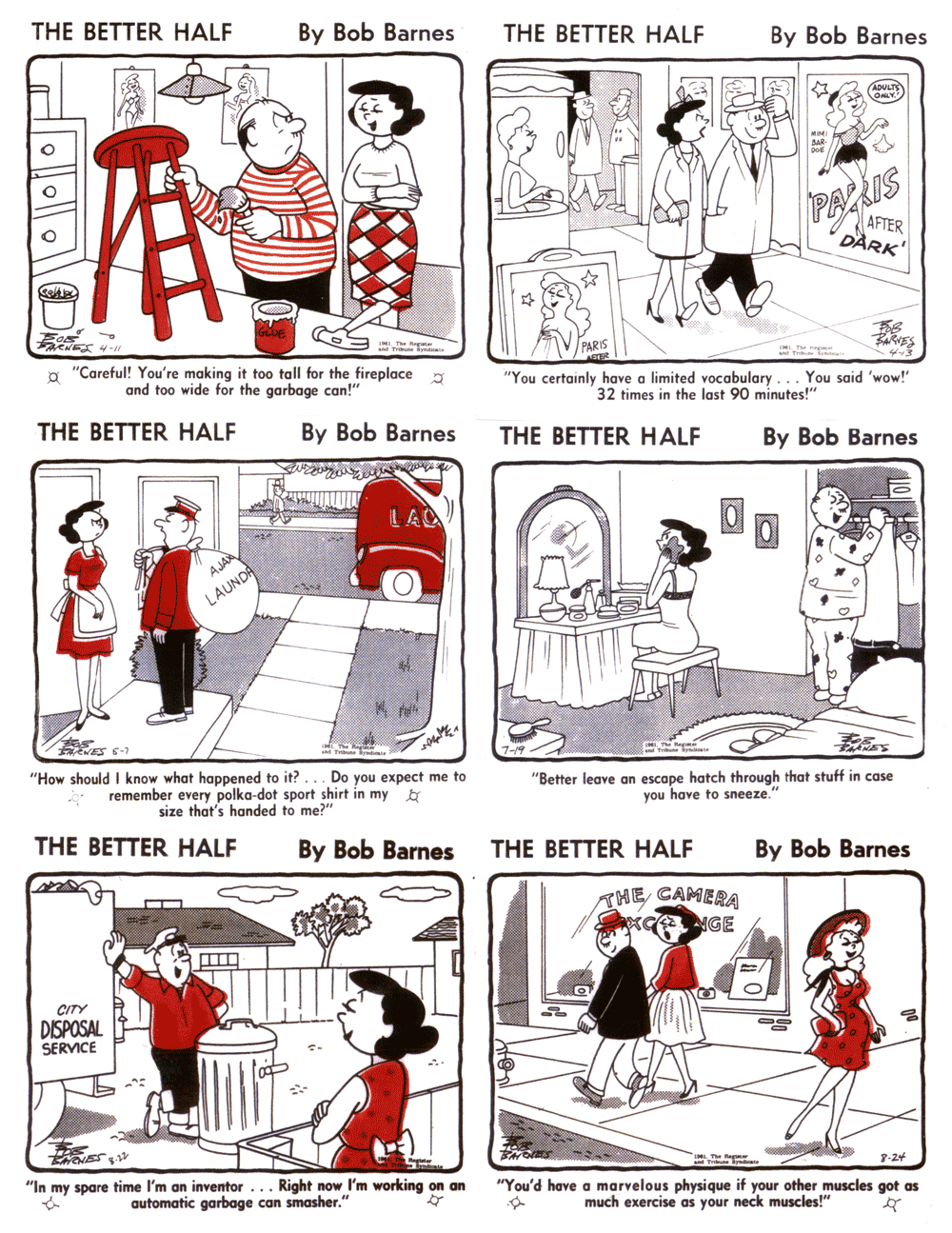 Back in the 1960s, THE BETTER HALF was considered, I suppose mainly by folks without a sense of humor, as too harsh and mean. But they did stay together and never gave any impression of real cruelty – more like a Nick and Nora Charles – like good-natured teasing.  When the LOCKHORNS came along in 1968,  they replaced friendly sarcasm with what I believe is something close to real hatred for each other, and the Parkers seemed pretty mild after that. 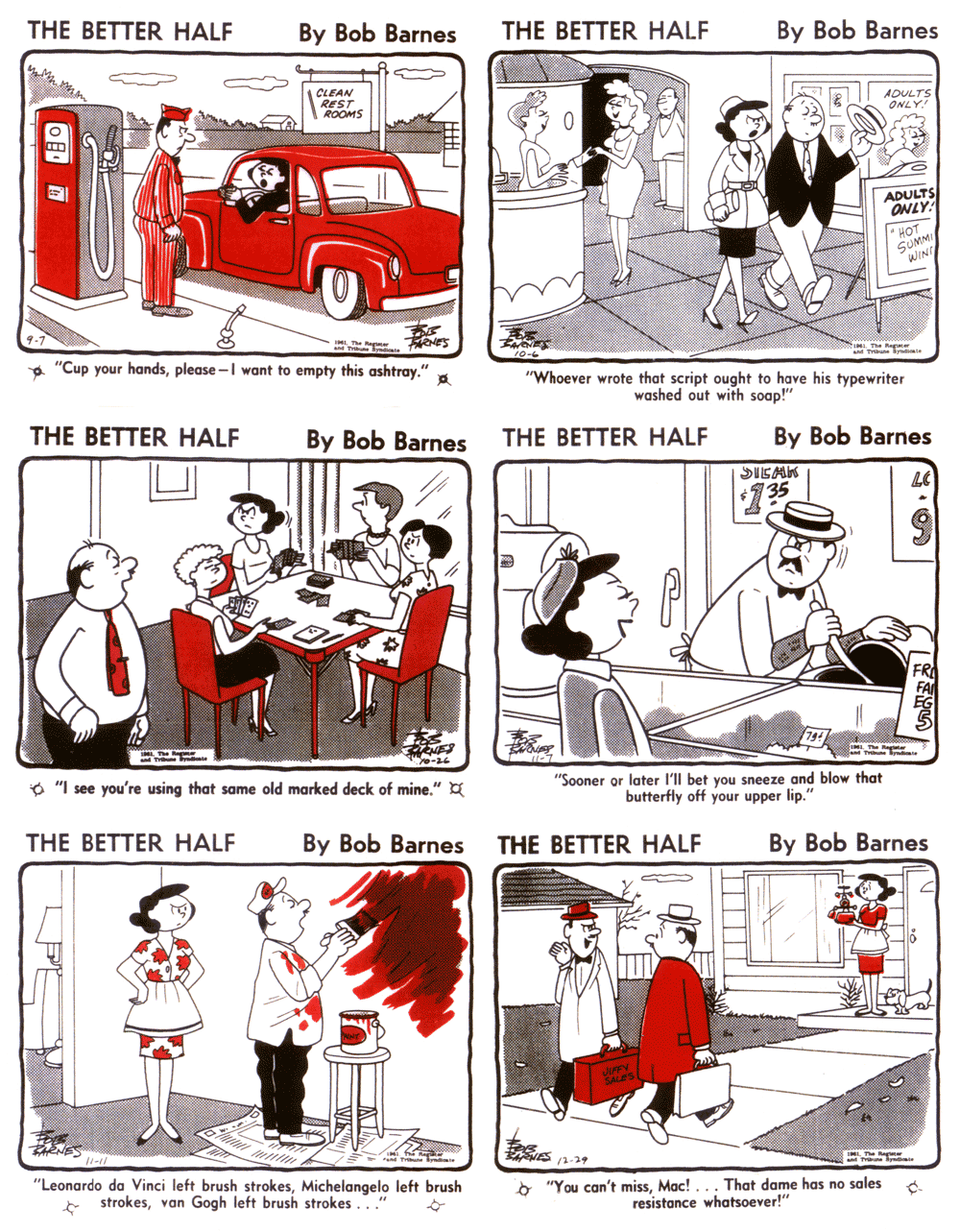 In November, 1970, Barnes died at only 57 years old. For some time his own better half had helped him with the strip, and she took over, parsing out panels Bob had done in advance along with her own work. The final one appeared a full year after his death. 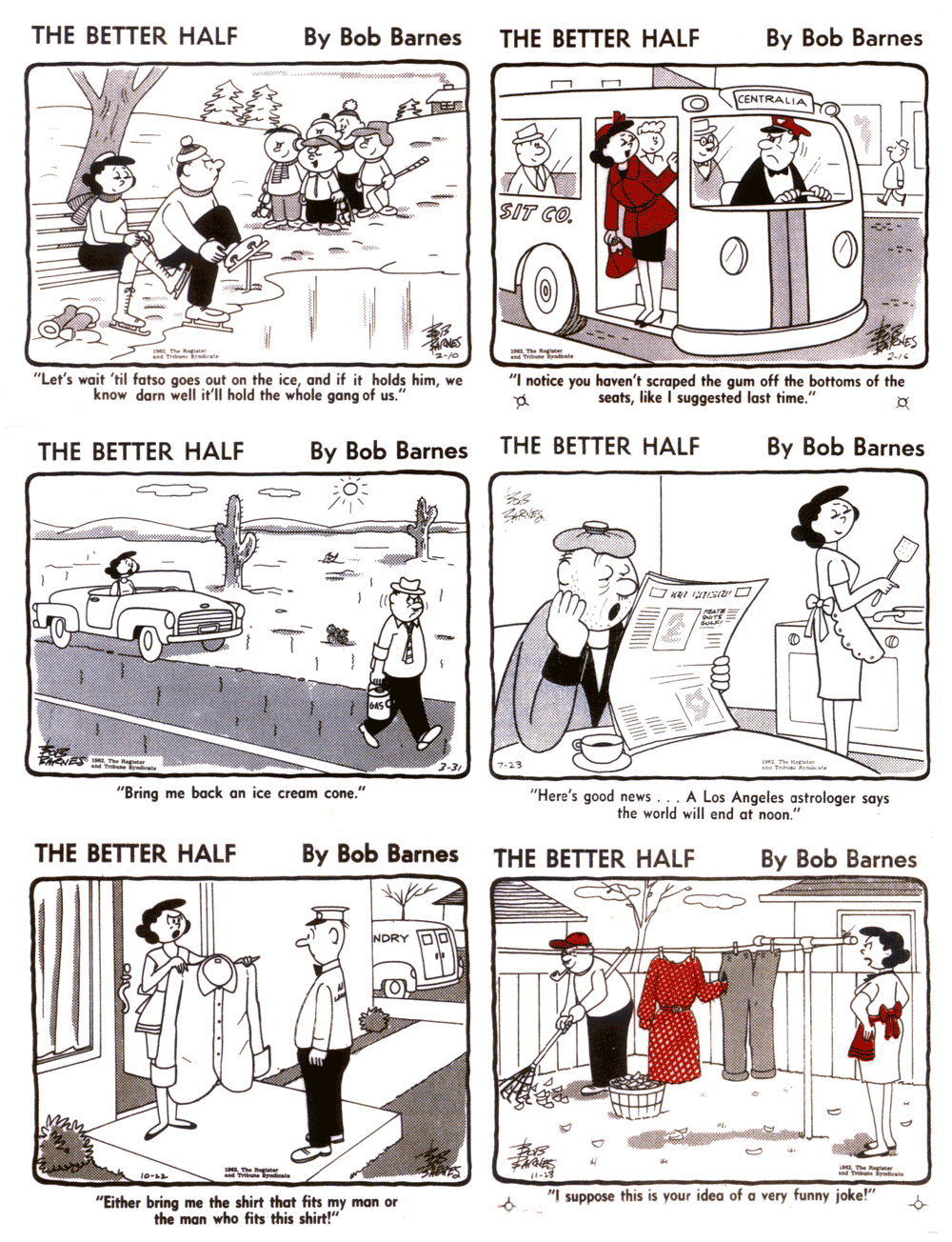 Examples of The Better Half dailies from 1957-62 by Bob Barnes. The Register & Tribune Syndicate often issued proofs with a few of the panels containing a single color added, often red, and often out of alignment. Anyone know why?

Today the panel continues, looking far different than in Barnes’ day. It is created by Randy Glasbergen, who took the helm in the 1980s. You can see THE BETTER HALF here.

I like to work from the anniversary angle, and this seemed to be the way to mark this one. There  are a few times that I could do this again, for example World War II, but that could get a bit repetitious. I  will do one next year for D-Day and the day of the first Moon landing, and potentially for the start of World War I.

I could be wrong, but there’s only a few real standout days like that that most people will be aware of, especially if you are too young for a first hand memory. Do you have any suggestions?

Such tragedies like JFK’s death do tend to elevate men to a higher level of historical importance. I have seen several references to William McKinley, contemporary with his death, where of the assassinated presidents up to that time (Abraham Lincoln, James A. Garfield, and McKinley) McKinley described as “the greatest of the three.” That’s rare to hear that sentiment now.

In the twentieth century, few specific real-life events would be recognized in the comics, outside of the two World Wars ending. For one thing, there’s several weeks from when an event happens and when a cartoon is drawn, mailed, printed up as a proof, mailed to clients and finally published. That’s why strips are always pretty much against being topical. MALLARD FILLMORE is as close to an editorial cartoon as a strip gets today.

There weren’t any strips that talked about Kennedy’s death, partially for the reasons I gave Mr. Fisher above, but also that comics were not only anti-topical, they were anti-controversy. They were ambassadors of goodwill for their clients, the papers in which they appeared. You can have all kinds of terrible heartbreak happen to the girls in APARTMENT 3-G or the tortured souls that MARY WORTH tries to help, and you can have enemy jet fighters firing missiles at BUZ SAWYER or FLASH GORDON at the mercy of Ming’s monsters, and the reader will still derive fun and excitement from it.

But serious, real world events like JFK’s horrific death will leave the reader unhappy. Negative feelings are not good for your product, and in fact some resentment may come about too, as many will view something so momentously solemn as being trivialized.