Today, we’ll look at an unusual King Features project of the post-War years, a lesson in understanding  atomic energy.

The atom’s power for vast destruction had ended World War II almost overnight in 1945  and left the United States as the only nation to possess atomic energy, making it far superior in military strength and the leader in scientific progress.

The how and why of atom-splitting was explained many times in many ways, but mostly, a lot of people were confused or unsure about just how that energy was created or what were the prospects for usage. General Leslie Groves, who had lead the Manhattan Project during the War, and now in retirement, was a respected expert on all things atomic. He first developed an idea for presenting the atomic story for laypeople with cartoons, and approached Joe Musial with this concept.

Joe Musial was an all-around utility player for the syndicate. He could write stories, do ghost work on any number of strips and comic books in different styles, even outside the Hearst realm.

As the head of “King Features Educational Division,” he first created an exhibit for the atomic show at the New York Golden Jubilee exhibition in 1948, explaining the workings of atomic power with King Features’ cartoon stars. This led to the comic book version.

General Groves wrote a preface in the finished book, and other contributors included Hearst columnist, Bob Considine, as well as several physicists and a quote from Bernard Baruch.

The most popular strip stars during that era were the Bumsteads, so naturally they would be the leads in the book. The “story” inside was that Blondie and Dagwood, accompanied by the rest of the King characters, attend a public lecture given by Mandrake on just what atoms are made of, how they get pulled apart, and what causes them to detonate.  The Bumsteads  are magically transported to atomic size so they can inspect the various neutrons, protons and electrons doing their stuff up close while a scientific explanation narrates the pages below the cartoons. Though Chic Young’s photo is inserted in the opening of the book, doubtless no one else but Musial drew the illustrations.

The original exhibit toured around the country, and even had the movie/radio/television Dagwood, Arthur Lake, visit one such showing. See below. 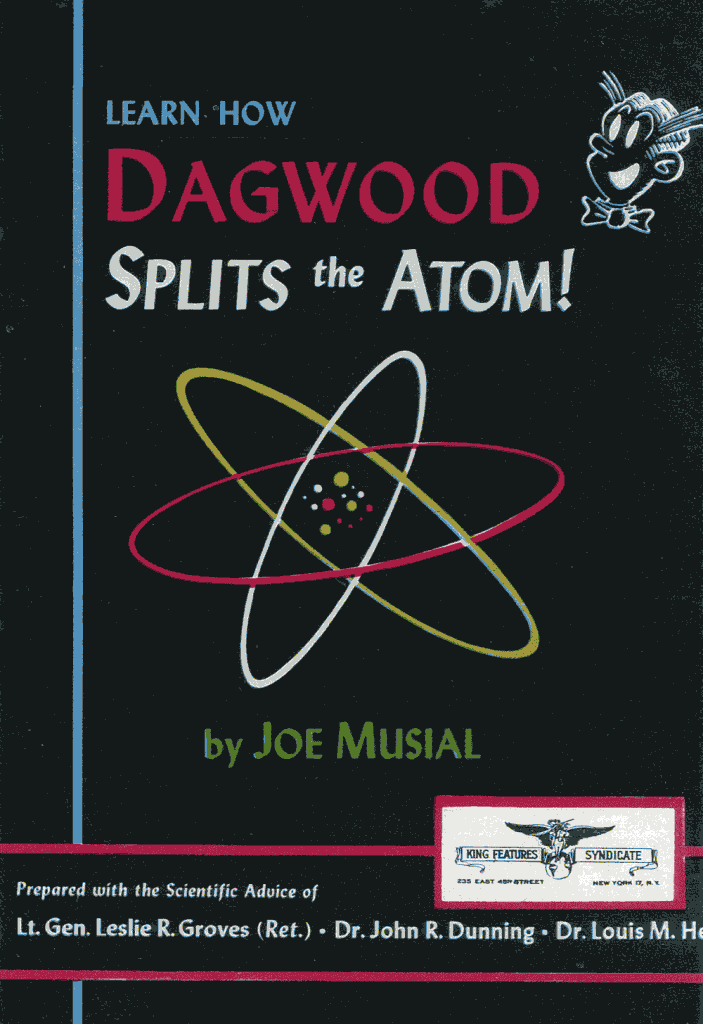 Cover of the book. This was Harvey’s file copy, now in my collection. They saved a poorly cut, rolled spine copy! 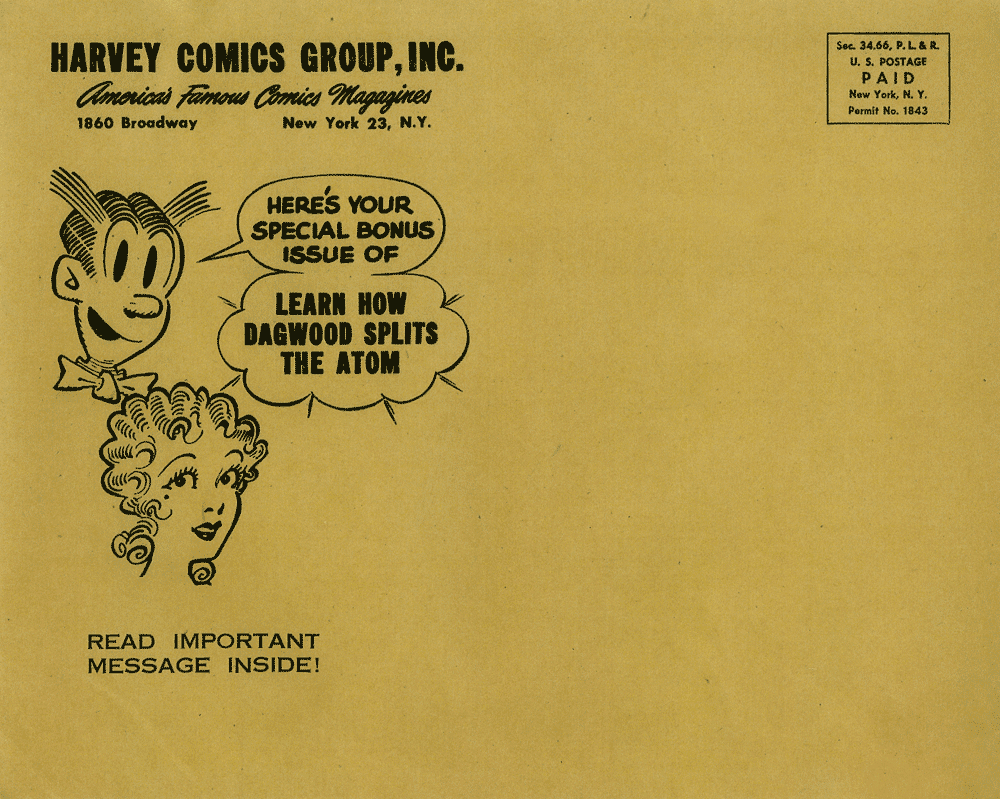 The original special mailing envelope. Probably rarer than the book itself. 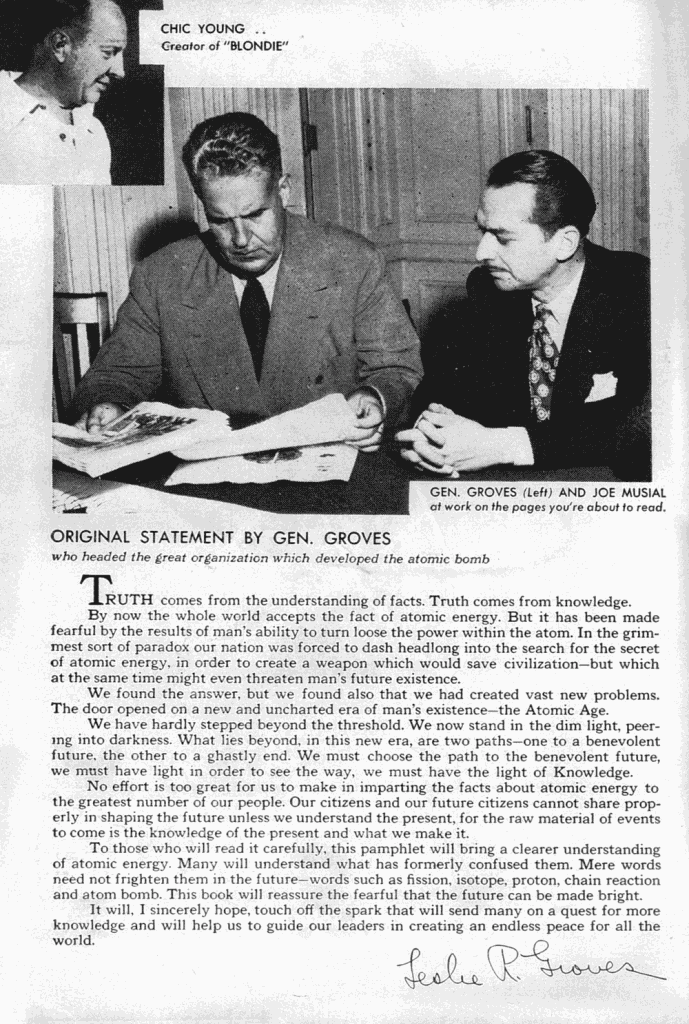 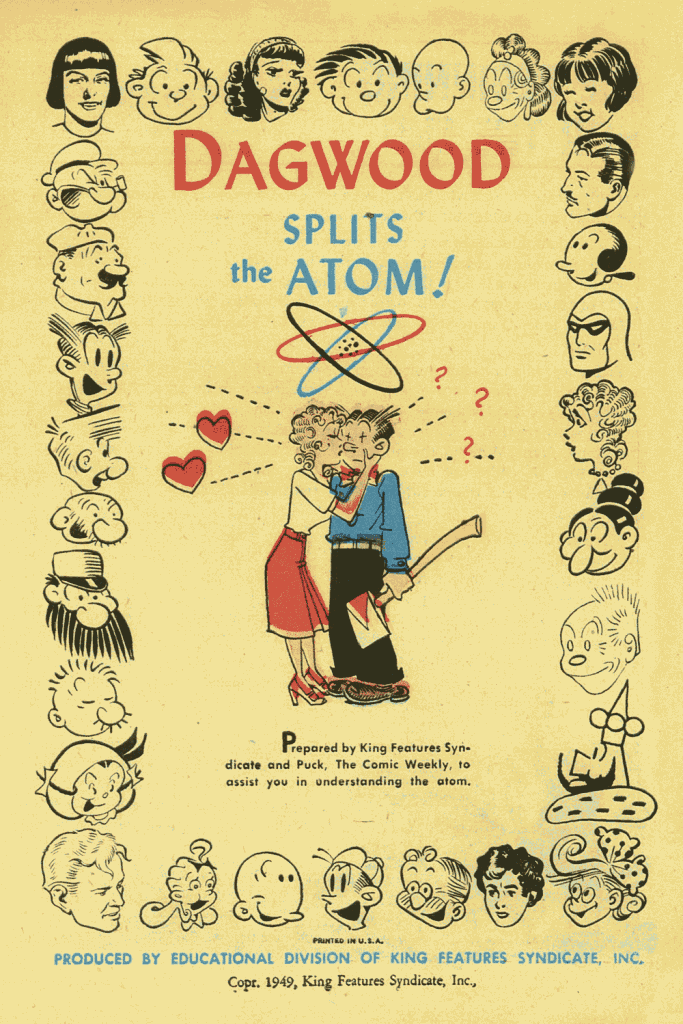 The Puck stars of 1949 frame the title page. Can you name them all? 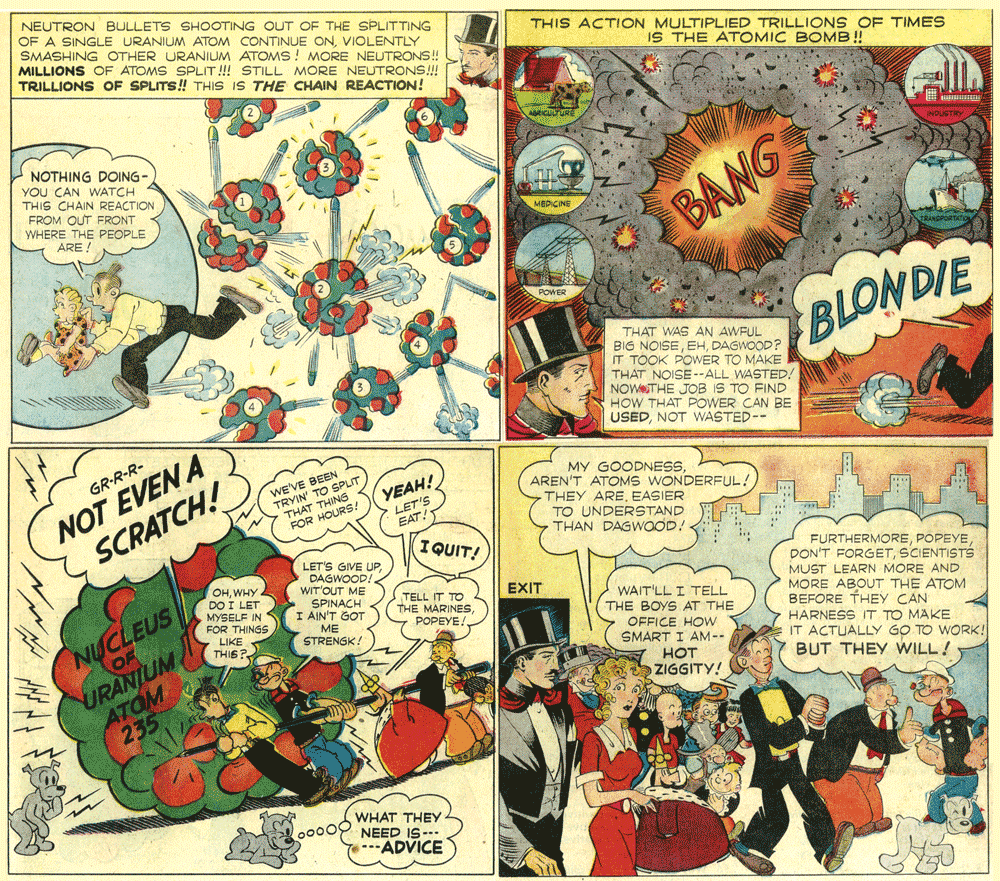 Some typical panels from the book. 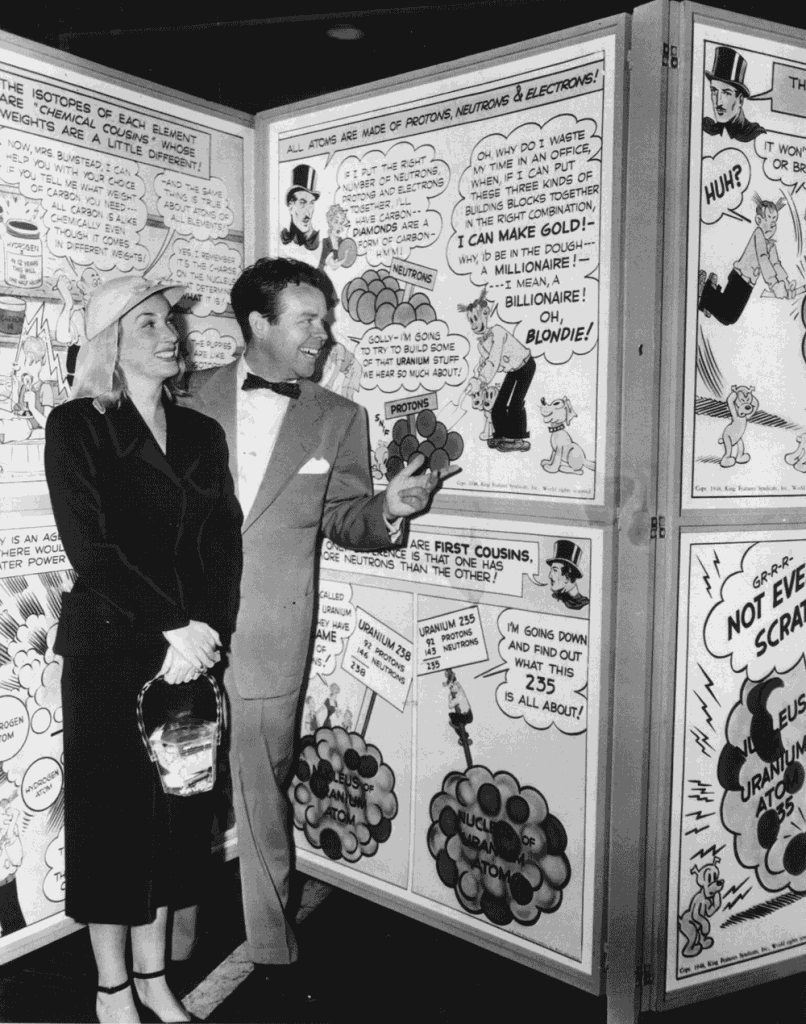 ‘DAGWOOD’ AND WIFE VIEW EXHIBIT…NEW YORK……ARTHUR LAKE, FAMED AS ‘DAGWOOD’, AND HIS WIFE ARE SHOWN AS THEY VISITED THE 7TH REGIMENT ARMORY TODAY TO VIEW AN EXHIBIT SHOWING DAGWOOD SPLITTING THE ATOM. DAGWOOD’S ATOMIC ACCOMPLISHMENTS ARE PORTRAYED IN A SERIES OF 23 ENLARGED PANELS WHICH ARE ON DISPLAY AT THE “ATOMS FOR PEACE” EXHIBITION, SHOWS BOTH THE PERILS AND PROMISES OF ATOMIC ENERGY TO MANKIND.

THIS EXHIBIT IS A FEATURE OF ARMED FORCES WEEK AND IS OPEN TO THE PUBLIC DAILY.

The comic book was a freebie that was given to schools as a public service of the Hearst Corporation (the free advertising for KFS comics was just an extra). It was  very well received, even earning praise from Congressman Eugene J. Keogh (D-NY) who brought up the project in a speech in the House of Representatives in July 1949; “We all know how interestingly Dagwood does everything…that he has now turned his talents to explaining in simple language how the atom is split is further to his credit.”

Later, Dagwood and Blondie would appear in other unusual comic books, which I’ll show some of them another time.