Popeye’s anniversary in the comics this month has him 83 years young, and his film career began just a few years later. Max Fleischer  made the first Popeye animated series, and many say these efforts were the best. The first cartoon was nominally an entry in the Betty Boop series, she being the studio’s major star, though she plays a very small part in the cartoon “Popeye The Sailor.” (Released in July 1933) In the cartoon, Popeye, Olive Oyl and Bluto make their debuts with an uncomplicated story of Popeye meeting Olive for a trip to a carnival (Betty Boop is in the side show), where Bluto kidnaps Olive with Popeye in hot pursuit. Bluto leaves Olive tied to train tracks, as Popeye brawls it out with him. Popeye takes his first onscreen jolt of spinach, clobbers his histute nemesis and rescues his lady love from an oncoming locomotive in the nick of time. This pretty much sets the tone for the next seven-plus decades for the three characters. According to the late Bud Sagendorf, Bluto himself was created in 1932 for a short story in the THIMBLE THEATER comic strip with the intention of having a regular villain for the upcoming animation series then being planned by King Features and Paramount Pictures. 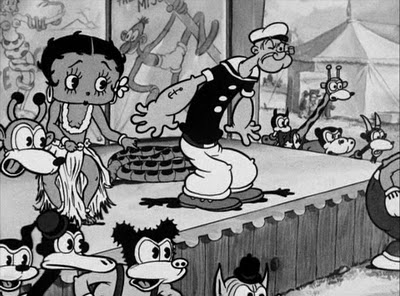 Popeye and Betty Boop in Popeye The Sailor, the first Popeye cartoon

The toons became wildly successful, and Popeye soon proved the top animated star, putting him above Mickey Mouse. Popeye’s screen adventures soon added other cast mates from the strip series, including Wimpy, Poopdeck Pappy, the Jeep, Swee’pea, the Goons and even George W. makes an occasional appearance. (George W. Geezil, that is.) Oddly, The Sea Hag never appeared in any theatrical cartoon, and had to wait until the TV cartoons in the 1960′s to make her debut. A few two reel special color cartoons such as “Sinbad the Sailor” hinted at the possibilities Popeye had under Fleischer for possibly an action feature, but alas, never materialized. 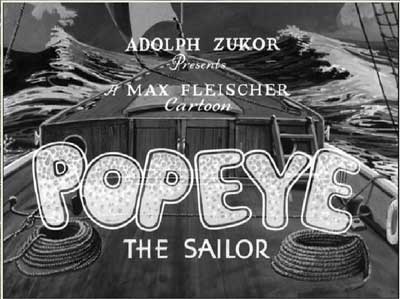 The famous “Deck” opening title of the Fleischer era.

In 1942, the Fleischer studios were taken over by Paramount and refashioned as Famous Studios, who would switch Popeye completely over to color, and eventually bring to the screen such milestones of subtlety and good taste as Katnip and Baby Huey. The high level of action and slapstick were maintained and produced until 1957, when production stopped and Famous was reorganized, now as “Paramount Cartoons.” All the Fleischer and Famous Studios cartoons were sold to TV distributors. The Popeye cartoons were parsed into a black and white package that hit the airwaves in 1956, and the color ones aired the following year. They were released by AAP in the United States and by their subsidiary United Telefilms in Canada. Popeye lived up to his record by becoming the hottest property in TV syndication and the need for more was evident just as the new field of made-for-TV cartoons was opening up. So, a new package of 220 cartoons was put out by King Features to satiate this market, hitting the airwaves in 1960-62. They were made fast and of varying quality, the work farmed out to Larry Harmon Pictures, Halas and Batchelor,  Gerald Ray Studios, Dick Kinney, and even back at Paramount Cartoons. All still retained the original cast voice talents of Jack Mercer(Popeye) Mae Questal (Olive) and Jackson Beck (Bluto). 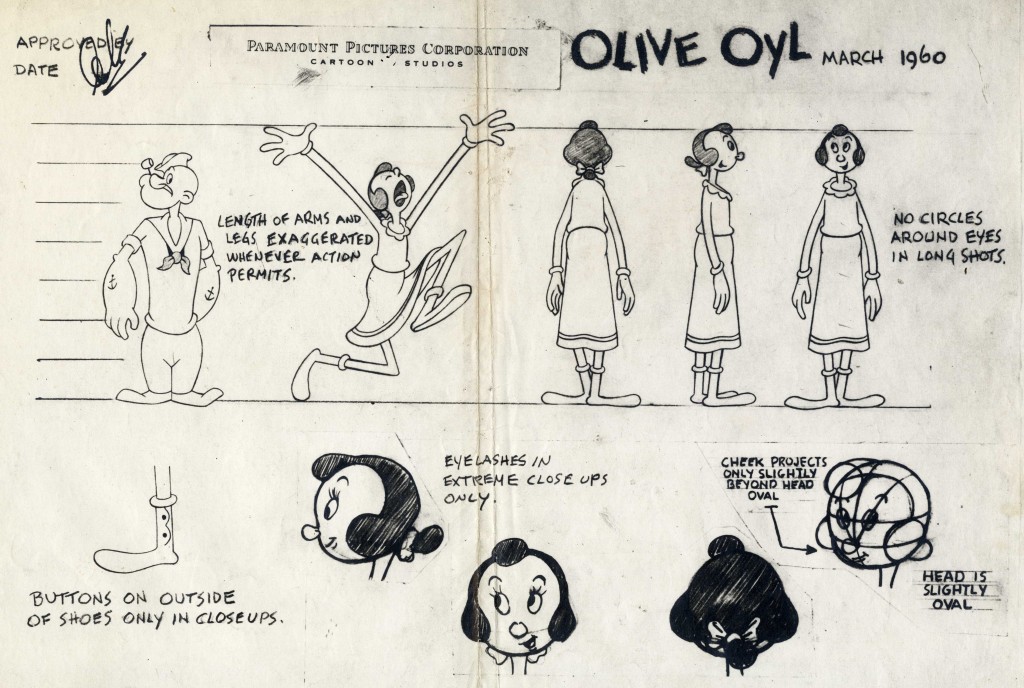 Popeye in all his forms was a big part of a Baby Boomer’s daily fare. Back in the 50’s, 60’s and 70’s, they were a valuable component of that bygone video phenomenon, the Kiddie show. A colorful host or hostess in some role model character motif like a cop, cowgirl, astronaut or even a forest ranger would present old cartoons and/or live- action comedies. The all-time champs who weathered changing tastes and formats were “Popeye” and “The Three Stooges.” In the 1970’s and early 80’s Popeye got into Saturday morning cartoons with “The All-New Popeye Hour” and “Popeye and Son,” produced by Hanna-Barbera. The great older cartoons used to flow from the small screen, but now, they have to be bought on disc or found on YouTube.  A great set of DVDs came out just a couple of years ago, with all the black and white cartoons restored. Well worth getting! 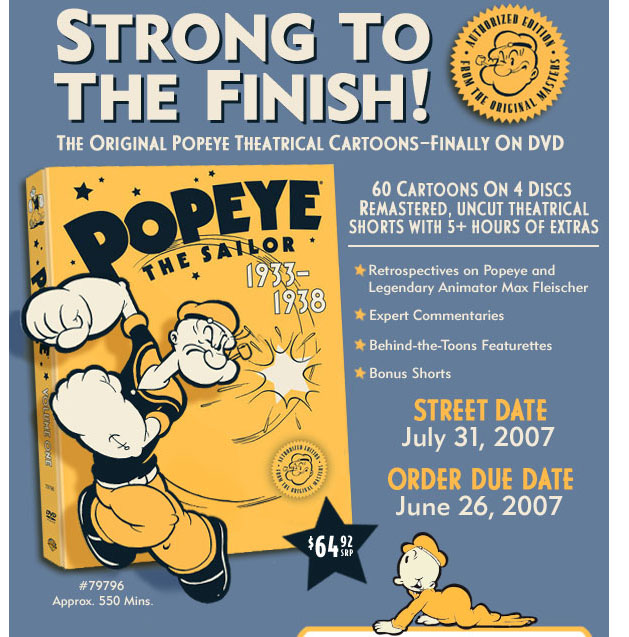 A trade ad announcing the black and white DVD release

Most recently, Popeye’s first CGI effort was released, “Popeye’s Voyage-The Quest for Pappy” in November 2004, and it is rumored a new project is forming now. So, Popeye the movie star only “retires” for a few years at a time, and  is, still very much with us.